Angel Ventura, 11, joins the Short Vowel Sound Club by singing a song about the vowels on top of a desk Tuesday at a summer reading camp, a free program for elementary students who are having trouble reading. Luis Sánchez Saturno/The New Mexican 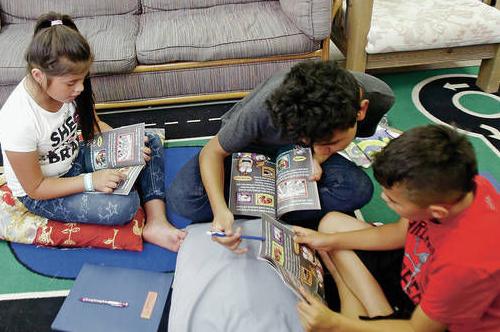 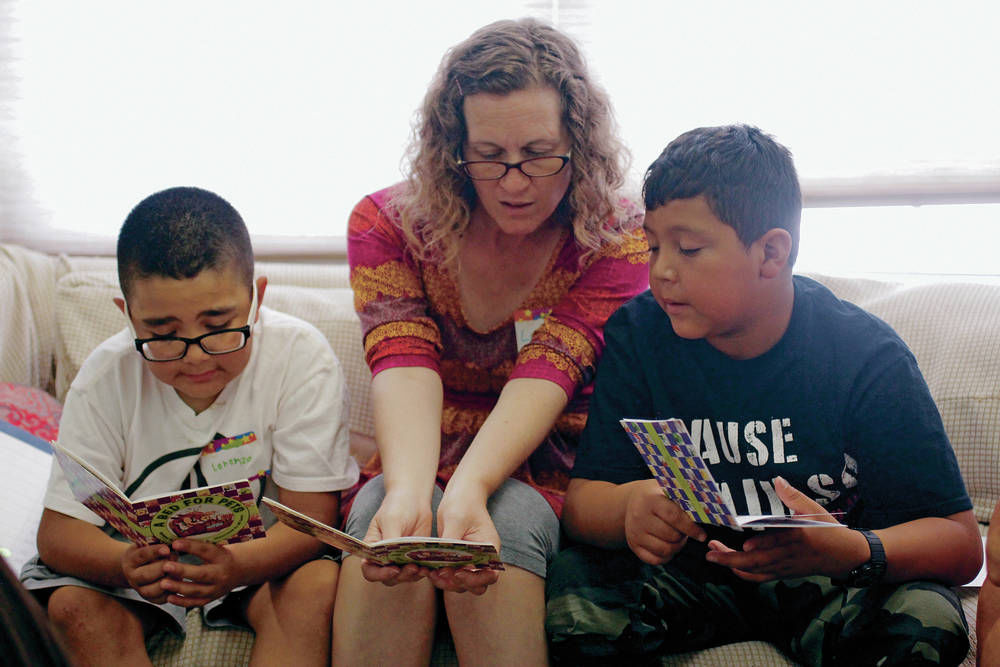 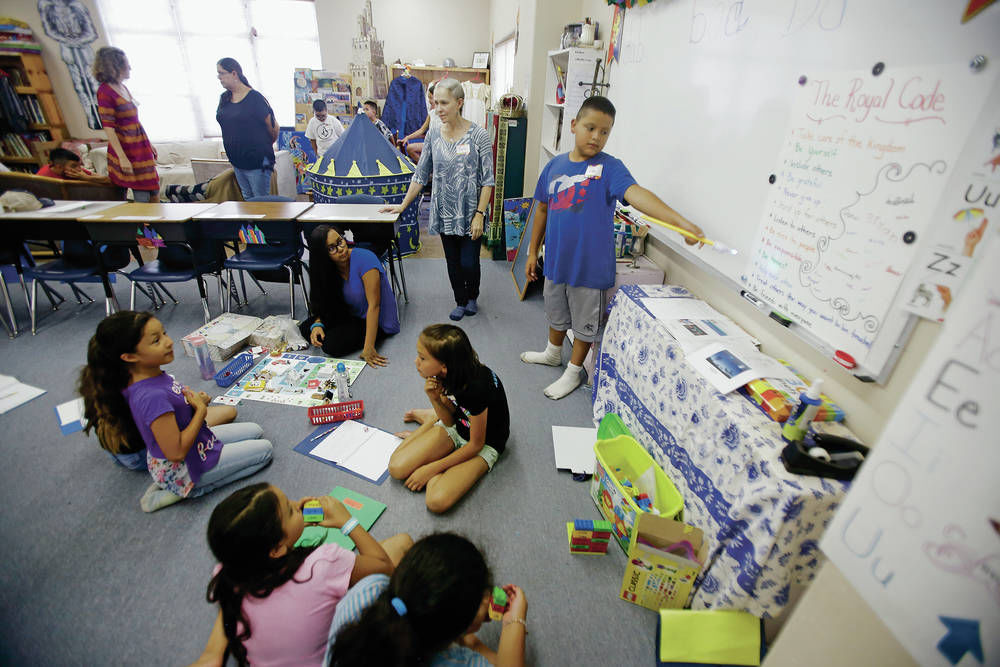 Rodrigo Quiroz, 10, goes over a student-made code of conduct July 25 at a summer reading camp, a free program for impoverished elementary school kids who are having trouble reading. Luis Sánchez Saturno/The New Mexican

Angel Ventura, 11, joins the Short Vowel Sound Club by singing a song about the vowels on top of a desk Tuesday at a summer reading camp, a free program for elementary students who are having trouble reading. Luis Sánchez Saturno/The New Mexican

Rodrigo Quiroz, 10, goes over a student-made code of conduct July 25 at a summer reading camp, a free program for impoverished elementary school kids who are having trouble reading. Luis Sánchez Saturno/The New Mexican

Angel Ventura stood on his desk in class — usually a no-no — and confidently recited the “Vowel Song,” a ditty designed to connect body movements with the six vowels of the alphabet, each vowel tied to a word. Around him, about 20 children stood mouthing the words and moving their arms along in sync.

Ventura’s unconventional presentation came during a two-week summer reading intensive program for third- and fourth-graders that uses play and experimentation — all set within the fantasy world of a medieval king’s court — to instill a love of reading.

“It’s helped me with reading,” said Ventura, who will be going into the fourth grade at César Chávez Community School. “It helped me to move on.”

According to educators overseeing the 5-year-old Reading is Magic summer program at the Santa Fe School for the Arts and Sciences, participants’ reading skills have improved by nearly a full year of schooling. Each student is assessed before and after the two-week camp, which is free and open to about 40 children in schools across the city who are struggling with reading.

A teacher’s recommendation is required for enrollment.

Teen tutors serve as mentors, leading games and other activities that center on reading. During an indoor baseball game, for example, students have to correctly spell a word before getting their chance to bat. To move from seat to seat in a game of musical chairs, they first have to read and write a set of words.

Rayna Dineen, founder of the private school on Jaguar Drive, started the summer program in 2012. It is largely funded with grants from the city of Santa Fe’s Children and Youth Commission and Santa Fe County.

The goal of the camp is to create a culture in which reading lessons are enjoyable — incorporated into play — and students begin to build confidence in their abilities and, as a result, boost their literacy skills. Such efforts are critical in a state and school district that have struggled to raise dismal reading proficiency scores. According to statewide standardized test results released earlier this week, less than 29 percent of public school students in both the city and state achieved passing scores.

“If we could find a way to do more of this in the public schools, really focus on reading, they’d all be doing so much better,” said Pamela England, who teaches fifth-grade bilingual students at César Chávez. She has been observing the camp this summer.

She has seen what two summers of the reading camp have done for Ventura.

“He was a mess,” she recalled of the shy student he once was, still struggling to learn English. “Now he has become the leader of his class. I know a lot of it has been from his being here, being focused on, being celebrated for his reading ability.”

Perli Cunanan, executive director of the Santa Fe School for the Arts and Sciences, which serves students in prekindergarten to eighth grade, said the environment that Dineen creates goes a long way toward encouraging the kids to learn. “It’s all about the culture,” she said. “Kids are vulnerable. They have to be in an environment open to learning, where they are allowed to make mistakes together.”

Teachers are constantly working to find ways to improve student reading skills, she said, but it’s not easy to find a simple solution. She gestured to a group of 21 students in the camp. “There are probably 21 different reasons for them not reading [proficiently].”

Many of the camp’s children come from Spanish-speaking families with parents who cannot help them with their English lessons. Others come from low-income families in which parents are working two jobs to pay the bills.

Gabe Lopez, a Santa Fe High School senior who serves as a reading tutor for the kids in the camp, said he was one of those kids several years ago.

“I grew up struggling with reading,” he said, adding that the camp is a good way to give back for the help he received.

Anne McGovern, a special education teacher at Sweeney Elementary School who is observing the camp, has seen the results of the program in her classroom. One of her former third-graders came into her classroom in August 2016, straight out of the camp, “Smiling, enthusiastic, using sign language” — which she learned at the camp.

“She was ready to roll and confident in her reading,” McGovern said. “… The biggest challenge for these kids is they don’t feel confident enough to read.”

And that lack of confidence can quickly erase any desire to read, the educators said.

“It’s like you start a race, and the kids already running the race with confidence go faster and stronger over new territory, and the kids who are not reading to grade level feel they are running the same course over and over again,” said Wood Gormley Elementary School teacher Amy Dominguez.

Eventually, they want to stop running, she said.

Cunanan said the private school and the camp are collaborating with other literacy-driven groups in town, including Santa Fe Public Schools, to discover best practices to use in teaching reading.

They hope to see the effort grow, she said. “We want to see kids turn into confident and joyful readers. And if we can focus on that, the other things will fall into place.”