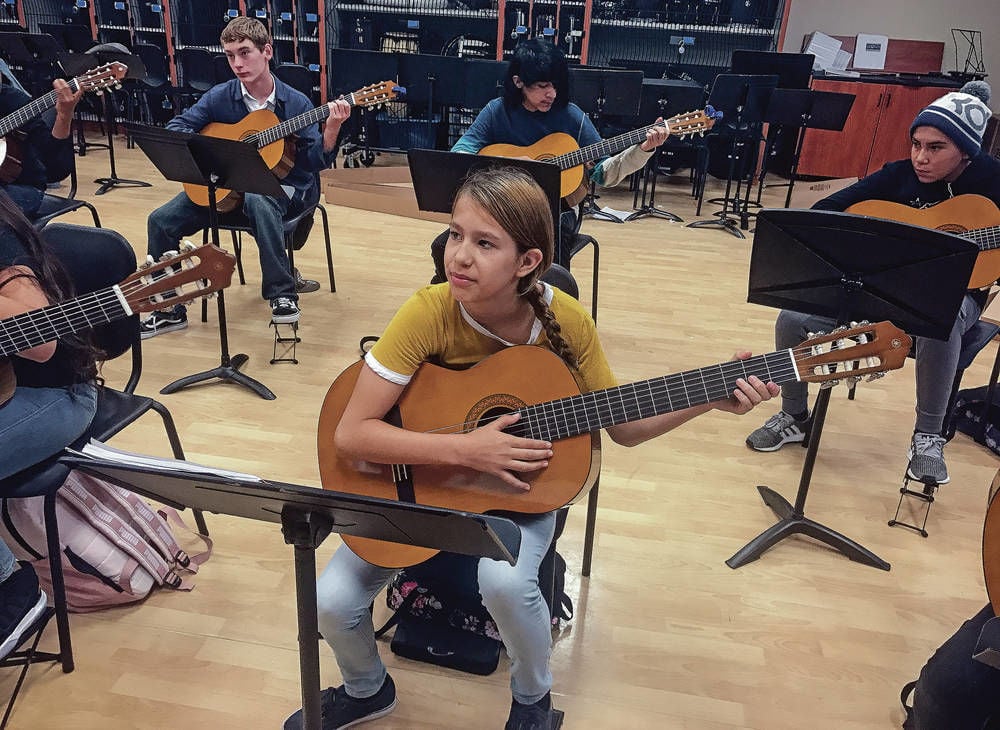 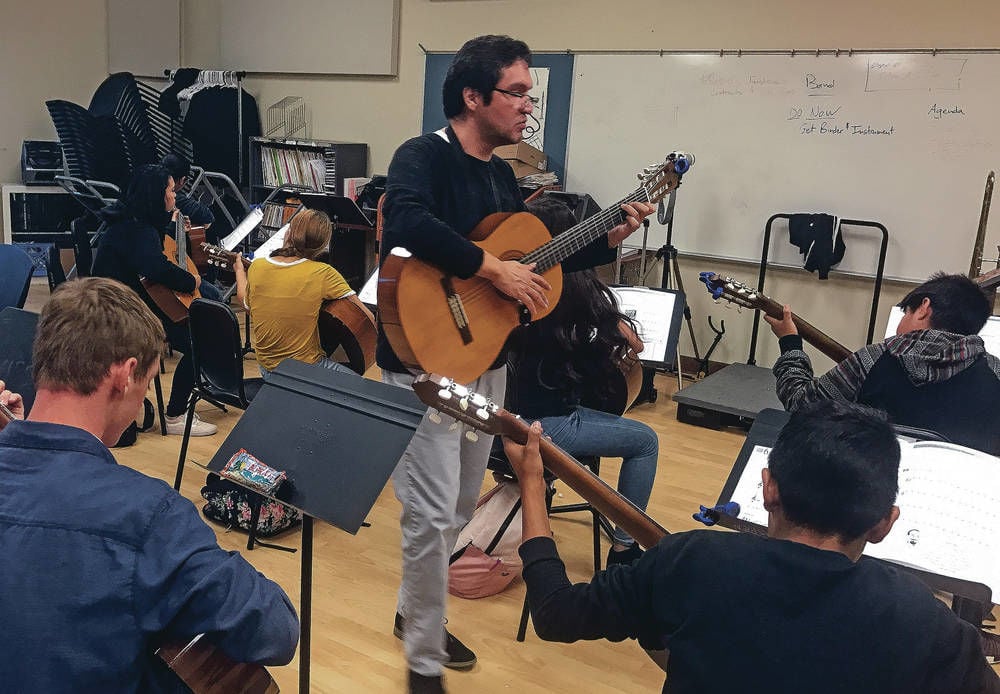 The students in Ricardo Reyes Paz’s class had barely finished reciting the Pledge of Allegiance when they turned to pick up the new classical guitars sitting on the floor by their chairs.

“Right foot flat on the floor,” Paz said to the dozen or so middle-schoolers at Aspen Community Magnet School as their first class of the day began. “On time — everyone on time.”

Within seconds, the soothing, gentle sound of guitar strings filled the room, paying homage to an ancient classical music tradition and giving the musically inclined students the chance to learn a new instrument and style.

“My family and I love Spanish music,” said eighth-grader Alexis Enriquez, who said he has played the flute, saxophone and guitar. “The best thing is learning the notes and being able to play the strings with my hands.”

Classical guitar requires the players to pluck individual strings with fingers, not guitar picks. While you might think the music simply encompasses the works of Isaac Albéniz or Joaquín Rodrigo, it does not exclude the fun-to-hear “Spy Tune,” which mimics the theme from the James Bond films.

As Paz’s students worked through the number, he moved about them, guitar in hand, saying, “It needs to sound like one guitar, not 15.”

Though the district has offered classical guitar programs at several of its schools, including Santa Fe High, this year it opened two more at Capital High School and Aspen. And Paz said he wants to start more.

Leanne DeVane, music education coordinator for the district, said the district provides general and vocal music programs in all elementary schools, as well as band, choir and orchestra in all middle and high schools.

But the tradition of classical guitar, she said, “is close to the heart of this community, with its roots in Spain, Mexico and our own Northern New Mexico.”

Paz, who ran a successful classical guitar program in Arizona before moving to Santa Fe this year, began studying guitar as a boy in his native Mexico, later studying at the National School of Music of the National Autonomous University of Mexico. He also works as a classical guitarist in public venues.

“In this country the normal music programs they offer are band, orchestra and choir,” he said. “Very few states offer a classical guitar program. What I find unique is not just the guitar but the focus on the finger style. They never get to use a [guitar] pick. They have to focus on their finger style. If you really want to make a beautiful sound, you have to use your finger, and not a pick.”

He said that while most of his students have had some musical background, they are unaccustomed to the classical guitar. “They want to play ‘Stairway to Heaven,’ ” he said. “Some tell me, ‘I don’t know the name of the song that I want to play, but I want to use a lot of fingers.’ ”

Eighth-grader Carter Grizzle is one of those students. He’s played acoustic and electric guitar and is used to playing with a pick. Studying his guitar, he said, “It’s a lot different. It sounds different. The strings are different. The neck and the front board [of the guitar] are way wider than any I have played.”

The music that comes out of the guitar, he said, “is softer … for me it’s almost as if it’s telling the story of Spain itself. It just reminds me of ‘back then.’ ”

Arts education advocates argue that such programs allow students to use skills they learn in other classes — reading, math and even history — in a creative way and say arts, like athletics, are often the course that keeps students interested in school.

“Even if you don’t want to be a musician, music makes you more aware of your surroundings as a human being,” he said. “You develop more of a sensibility to the things that are going on around you. I have students in class who are having a hard time in their lives and when they start playing the guitar they forget about it — at least for that hour of class.”