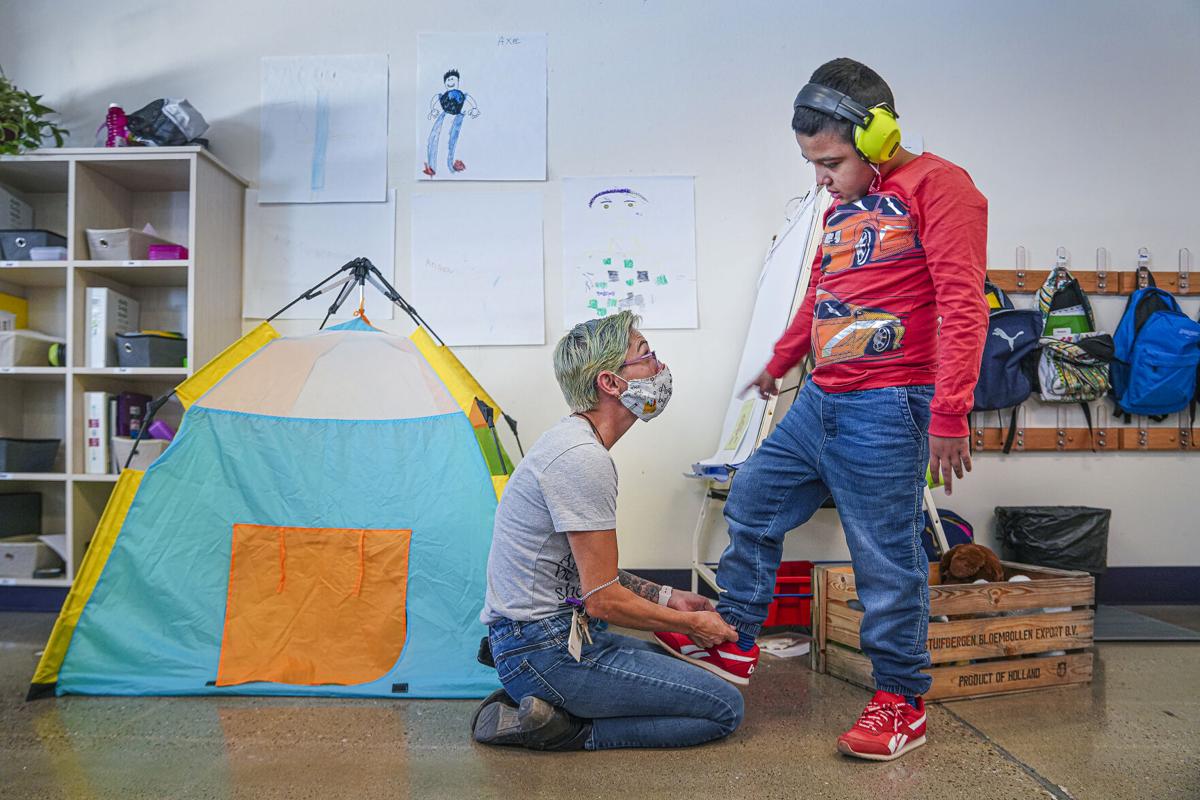 Jamie Torres, special-education teacher and one of the teachers chosen to be a state ambassador for the 2021-22 academic year, ties the shoelace of her student, Alex Garcia-Gutierrez, before recess at Kearny Elementary School in their highly structured autism classroom on Thursday afternoon. 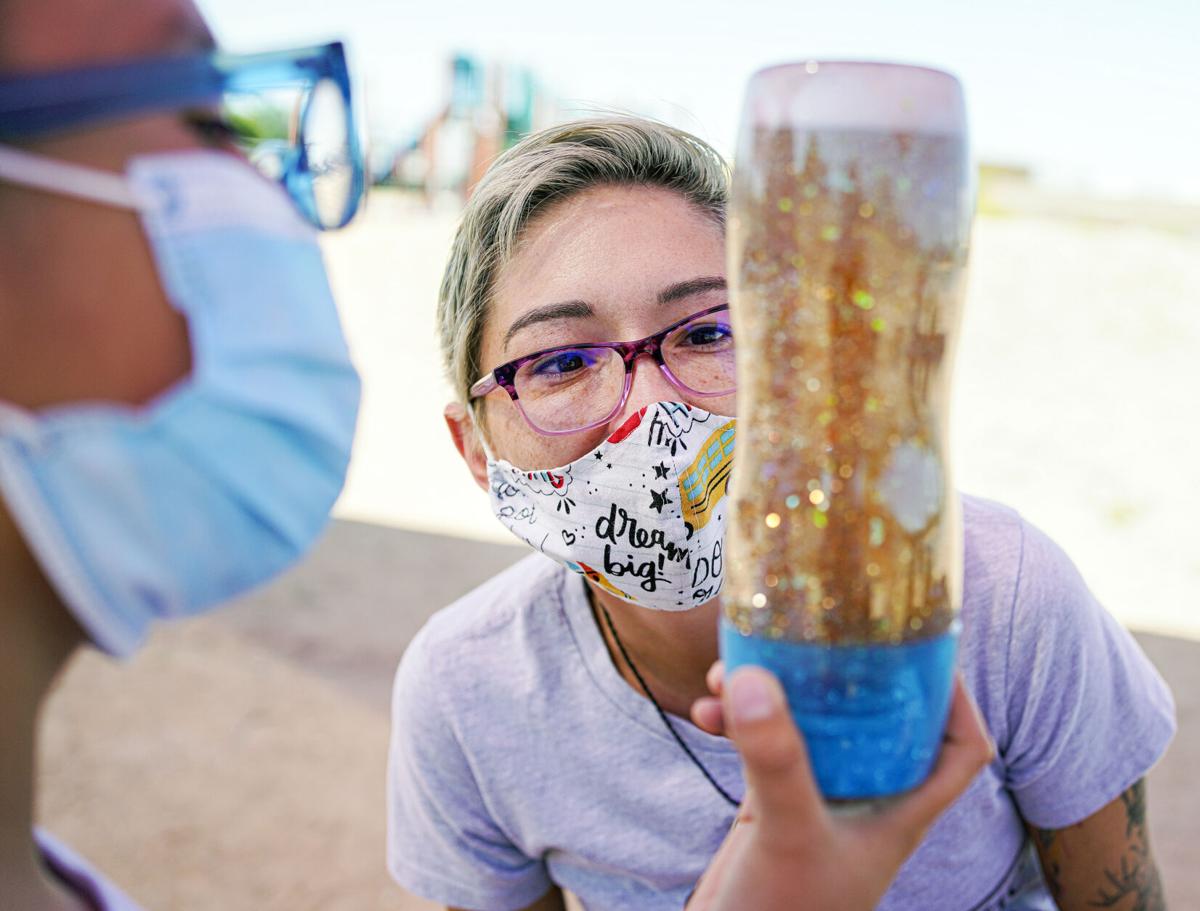 Jamie Torres, special education teacher and one of the teachers chosen to be a State Ambassador for the 2021-2022 academic year, looks at her student Asa Castillo Johnson’s sensory bottle completed during a science lesson at Kearny Elementary School in their highly structured Autism Classroom on Thursday afternoon. 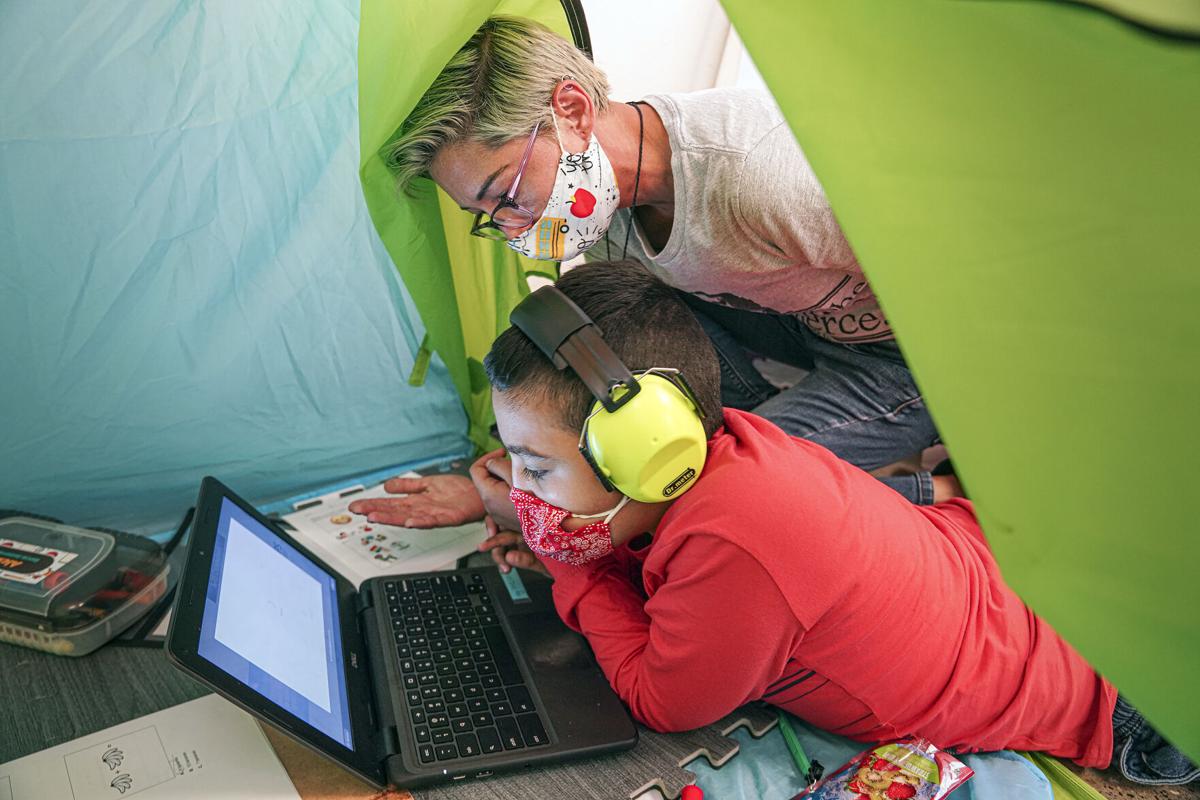 Jamie Torres, special education teacher and one of the teachers chosen to be a State Ambassador for the 2021-2022 academic year, helps Alex Garcia- Gutierrez on his computer at Kearny Elementary School in their highly structured Autism Classroom on Thursday afternoon. 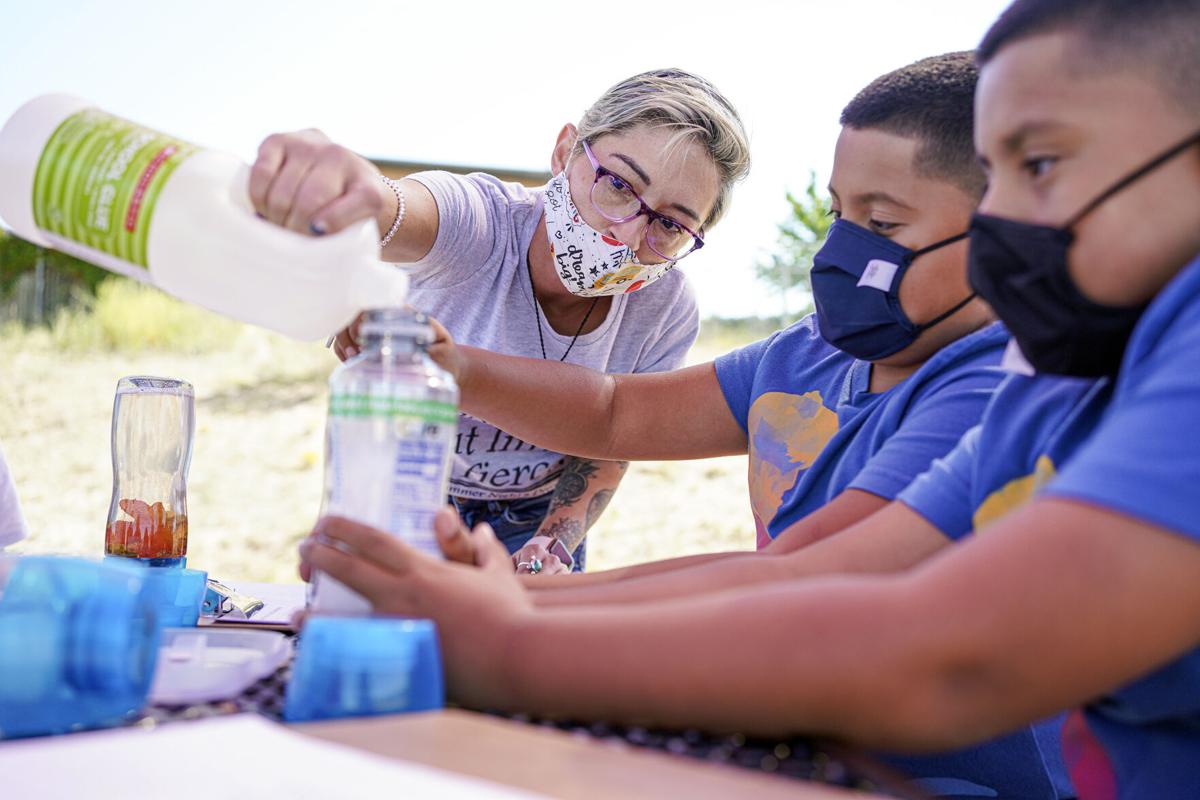 Jamie Torres, special education teacher and one of the teachers chosen to be a State Ambassador for the 2021-22 academic year, pours glue into bottles for brothers Yael and Axel Mendoza Morales while working on sensory bottles for their science lesson at Kearny Elementary School in their highly structured Autism Classroom on Thursday afternoon.

A well-traveled Jamie Torres remembers thinking as a young adult that she’d never want to return to New Mexico.

Now at 33, she feels Santa Fe has called her back for important work.

She was recently named one of 21 teachers statewide who will spend this school year learning more about the policy that shapes New Mexico’s education system, while advocating for teacher development and retention as a state ambassador through the Public Education Department.

Finally, she said, it felt like the education department was less like the Wizard of Oz making declarations behind a curtain and more like a place where she could help bring change.

Torres and the other teachers will meet with stakeholders through the school year to raise awareness about their profession.

Torres fills a space that is most desperately needed. According to a 2020 study from New Mexico State University, special-education positions made up 27 percent of all teacher vacancies identified statewide last September.

Within that category, the need for special education teachers in elementary settings was highest. The Santa Fe Public Schools job website lists 35 open positions in special education districtwide as schools return to in person learning amid a changing coronavirus pandemic landscape.

Torres is relieved that none of those vacancies involve her own classroom.

“There’s a whole team behind these classrooms. I would not survive the day without my educational assistants,” she said. “It makes a world of difference to be part of a strong team.”

It’s not just in New Mexico that special education teachers are hard to come by.

In a report released at the start of 2021, the Office of Special Education and Rehabilitative Services reported that for the nearly 6 million children in need of specialized services in 2017, there were 389,456 special-education teachers to help — not all of them certified.

“It’s no mystery or secret that there are severe teacher shortages,” Torres said.

Torres is working on her doctoral degree at Grand Canyon University, where she’s studying educational leadership with an emphasis in special education. Her research focuses on teacher retention in high needs environments.

Her studies and first hand experiences help shed light on some of the obstacles special education teachers face.

In her classroom, Torres develops individual lesson plans for each student. Like other special educators, she’s also doubling as a case manager for eight or nine student individualized education plans at a time.

She and others also must be well-versed in law: Both the Americans with Disabilities Act and the Individuals with Disabilities Education Act have provisions protecting how disabled students are treated and taught in public schools.

“You take on two roles in the time frame of one,” she said.

And up until the district offered additional stipends for high needs classrooms, she and others were doing it for the same salary as teachers in general education classrooms.

At the same time, it’s the individuality that her classroom runs on and the teamwork required to sustain it that helps keep Torres energetic about her work.

“Each student is an individual, and the moment you try to take away from their individuality, it doesn’t work out,” she said. “It’s a very fun juggle at times. And I do appreciate how it does demand that need for collaboration.”

Born and raised in Santa Fe, Torres’ life changed in 1999 when, at age 9, she was riding a bus back from the Santa Fe ski basin. The bus, maintained by a third-party company, overturned on Hyde Park Road, killing an adult chaperone and a fellow student. Thirty others were injured.

“I had a lot of childhood trauma, and I joke because now everyone teases me I’m a career student,” she said.

She added: “I’m forever enrolled in a program. People think I was forever this great student. But I joke and say if behavioral programs were very effective in the early 2000s, I definitely would have been in a behavioral student [program].”

Torres has attained two master’s degrees since becoming a teacher — one in linguistics and another in autism spectrum disorders, which she earned while teaching in the life skills program at Capital High School.

As a high schooler, Torres met Mary Louise Romero through the Carlos Ortega Teen Center, where Romero worked at the time.

Now, both work for the district — Romero as a restorative justice coordinator.

But back then, it was Romero who showed the teenaged Torres her own potential, even guiding her to pursue sign language interpretation in college.

Romero, who is hard of hearing, spent a lot of time in the Santa Fe community working to bring hearing and nonhearing students together while working at the Carlos Ortega center.

Torres was one of those hearing students. She was a “good human being,” Romero said, and simultaneously gifted in learning sign language.

“Those people are the ones you remember in the world. And Jamie was just that,” Romero said.

At Romero’s urging, Torres set off for Columbia College in Chicago after high school to become a sign language interpreter. From there, she got her first taste of teaching through the Peace Corps in Namibia and later volunteered with programs that took her across South America.

“I’m not surprised that she’s doing what she’s doing today,” Romero said. “Jamie was one of those people, and I could take a step back and see what she was willing to do to reach the heart of others.”

Thank you Jamie Torres. As a retired Spec Ed teacher, I can see you realize the many aspects involved in teaching special needs children. That's wonderful for the many students you will teach & encourage. You're intelligent, energetic & young enough to accomplish your goals for this program. Best of luck.