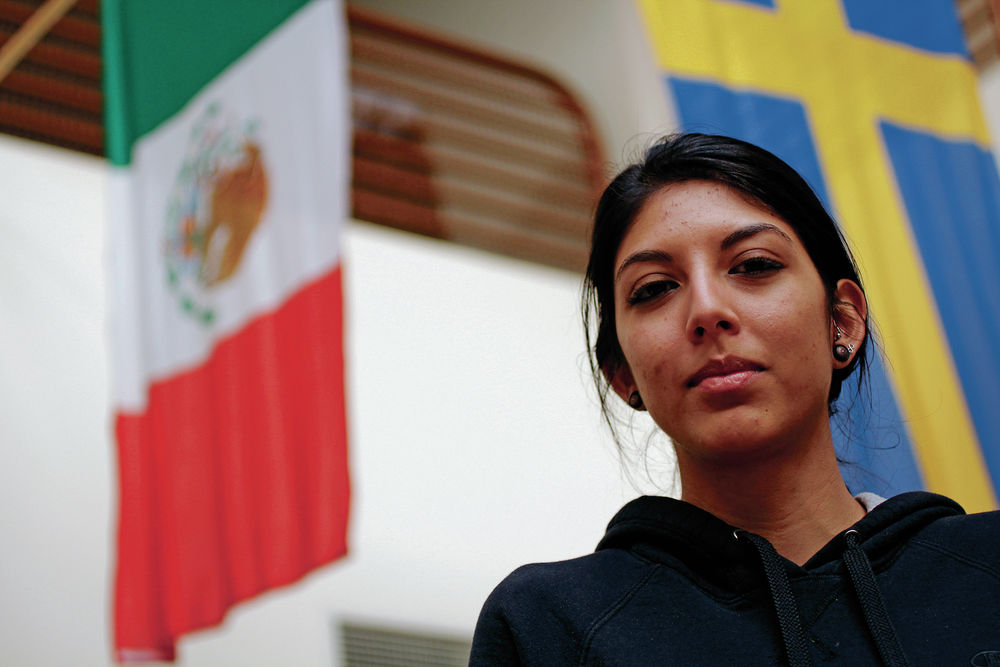 Kimberly Juarez, 21, a nursing student at Santa Fe Community College, is from Mexico, but she has lived in the United States for the past 20 years. She benefits from the Obama administration’s Deferred Action for Childhood Arrivals. Luis Sánchez Saturno/The New Mexican 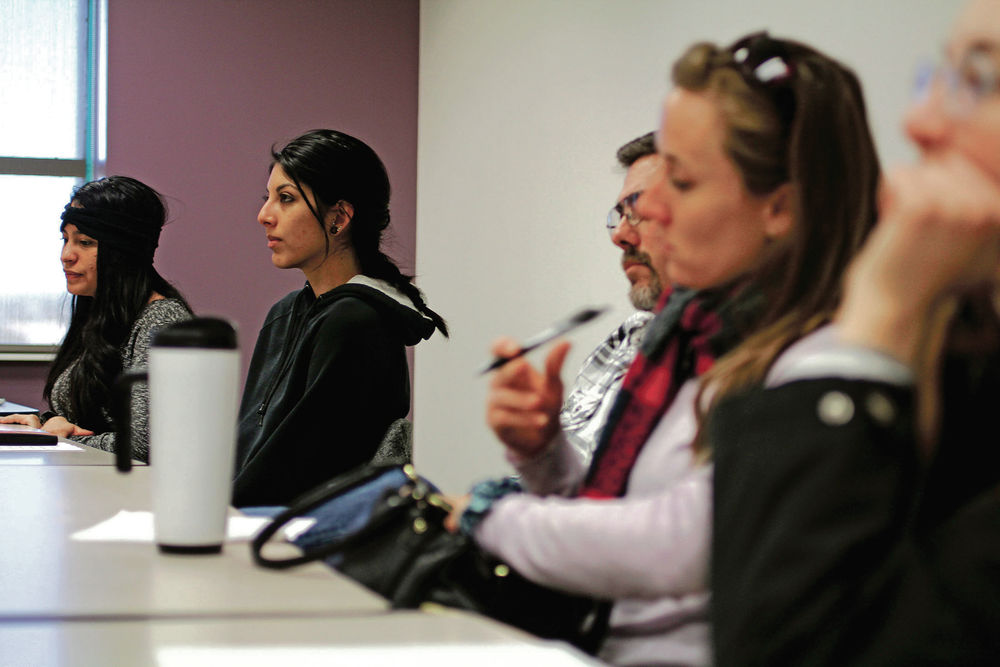 Nursing student Kimberly Juarez, 21, second from left, sits in her public speaking class Wednesday at the school. The college’s board on Wednesday approved a resolution declaring the school a ‘sanctuary campus’ for immigrant students. Luis Sánchez Saturno/The New Mexican 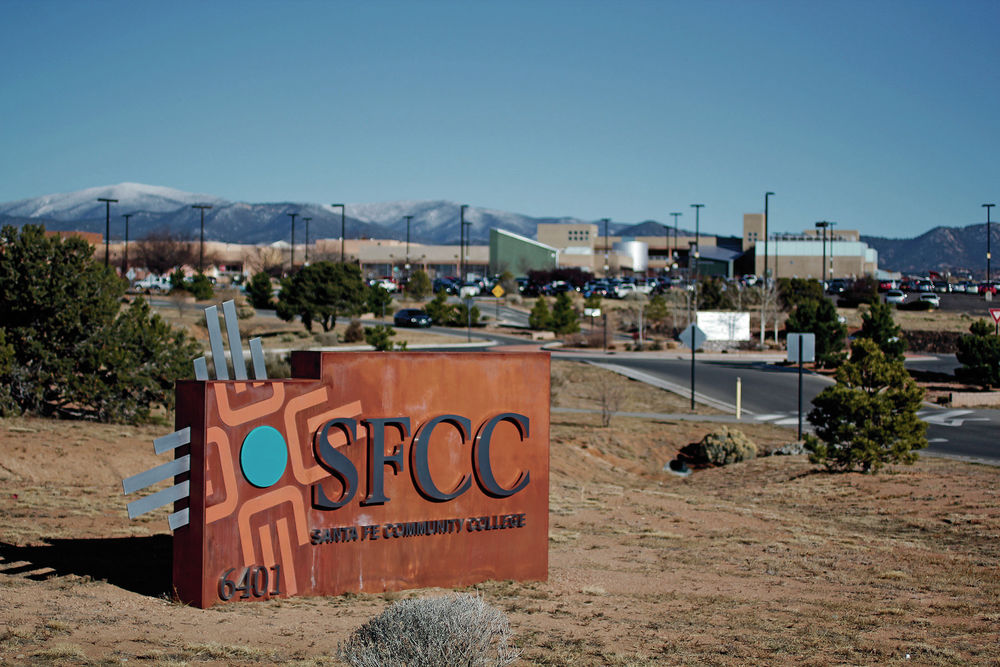 Kimberly Juarez, 21, a nursing student at Santa Fe Community College, is from Mexico, but she has lived in the United States for the past 20 years. She benefits from the Obama administration’s Deferred Action for Childhood Arrivals. Luis Sánchez Saturno/The New Mexican

Nursing student Kimberly Juarez, 21, second from left, sits in her public speaking class Wednesday at the school. The college’s board on Wednesday approved a resolution declaring the school a ‘sanctuary campus’ for immigrant students. Luis Sánchez Saturno/The New Mexican

The Santa Fe Community College Governing Board approved a resolution Wednesday declaring the school a “sanctuary campus” for immigrant students, joining a movement by colleges across the country in defiance of President-elect Donald Trump’s vow to deport undocumented immigrants and cut federal funding to cities that shelter them.

“What we are trying to do is convey the message that we value our students, we value diversity and we want to make sure that the Santa Fe Community College is a safe and open place for anyone who wants to come here and learn and better themselves,” board President Kathy Keith said before the public meeting. The measure passed 4-0. One board member, Linda Siegle, was absent.

The vote was welcome news for students like Kimberly Juarez, 21, who is among immigrant students who have pondered since the Nov. 8 election whether they should return to their home countries to continue their education.

Juarez, who was born in Mexico but has lived in the United States for 20 years, is studying to be a psychiatric nurse. She said she is going to “tough it out” in Santa Fe, with the hope of attaining her associate degree in a year and a half.

Among the provisions in the college’s new resolution: restricting the release of information about students’ immigration status, instructing campus guards to refrain from working with immigration authorities and denying federal authorities seeking to enforce immigration policies access to the campus — except in an emergency or when an agent has a warrant.

Trump has said he will revoke President Barack Obama’s Deferred Action for Childhood Arrivals policy, or DACA, allowing young immigrants who entered the country illegally to stay temporarily. He also has threatened to increase deportations of undocumented residents and build a wall along the U.S.-Mexico border to deter new arrivals. And he has vowed to end financial aid to sanctuary cities, such as Santa Fe, that offer protections to immigrants without legal status.

The board’s action, Juarez said, “makes me feel safe being here.” She said she has never been concerned that immigration officials might arrive on the college campus to target immigrant students, but the policy ensures her “that the community college would not allow this to happen.”

“When a city or a college says it is a sanctuary, it allows students who are undocumented to feel safe and enjoy the opportunities that everyone else has within that city or campus,” Lopez said.

But community college student Kibsaim Alverez-Lira isn’t so easily convinced. “It would somewhat make a difference, but not really,” he said. “In school, we might be safe, but what about outside of school? Anyone can knock on your door and — it’s immigration.”

No one spoke against the resolution Wednesday evening.

Four community members spoke in support of it before the board’s vote. One, a teen who attends Capital High School, said he is the son of immigrants and has dreams of becoming a doctor. “That dream has been faded by threats,” he said.

Nationwide, several colleges and universities — including Wesleyan University in Connecticut— have recently declared themselves as sanctuary campuses, committed to defending immigrant students’ rights. Meanwhile, student- and faculty-led movements to push other colleges follow to suit are progressing at schools such as New York University, Ohio State University and The University of New Mexico.

Santa Fe Community College may be the first school in New Mexico to see such a measure enacted. In mid-November, students, faculty members, staff members and alumni of UNM sent a letter to President Robert Frank asking what the college could do to protect its immigrant student community. Frank responded with a letter saying school officials are trying to clarify what authority, if any, a college has to declare itself a “sanctuary” and what that means in terms of state and federal laws.

Garrey Carruthers, president of New Mexico State University in Las Cruces, doesn’t believe it means much. He said in a statement to the media last week that NMSU is not pursuing sanctuary status because state law already protects undocumented immigrants who graduated from New Mexico high schools and are attending college in the state — including denying access to student records without the student’s permission or a court order.

Federal law does not forbid undocumented immigrants from attending college in the U.S. Several states — including New Mexico, Texas and Arizona — allow immigrant students without legal status to not only attend a university but also to pay in-state tuition. In New Mexico, those students also can access the state’s lottery scholarship fund if they are eligible.