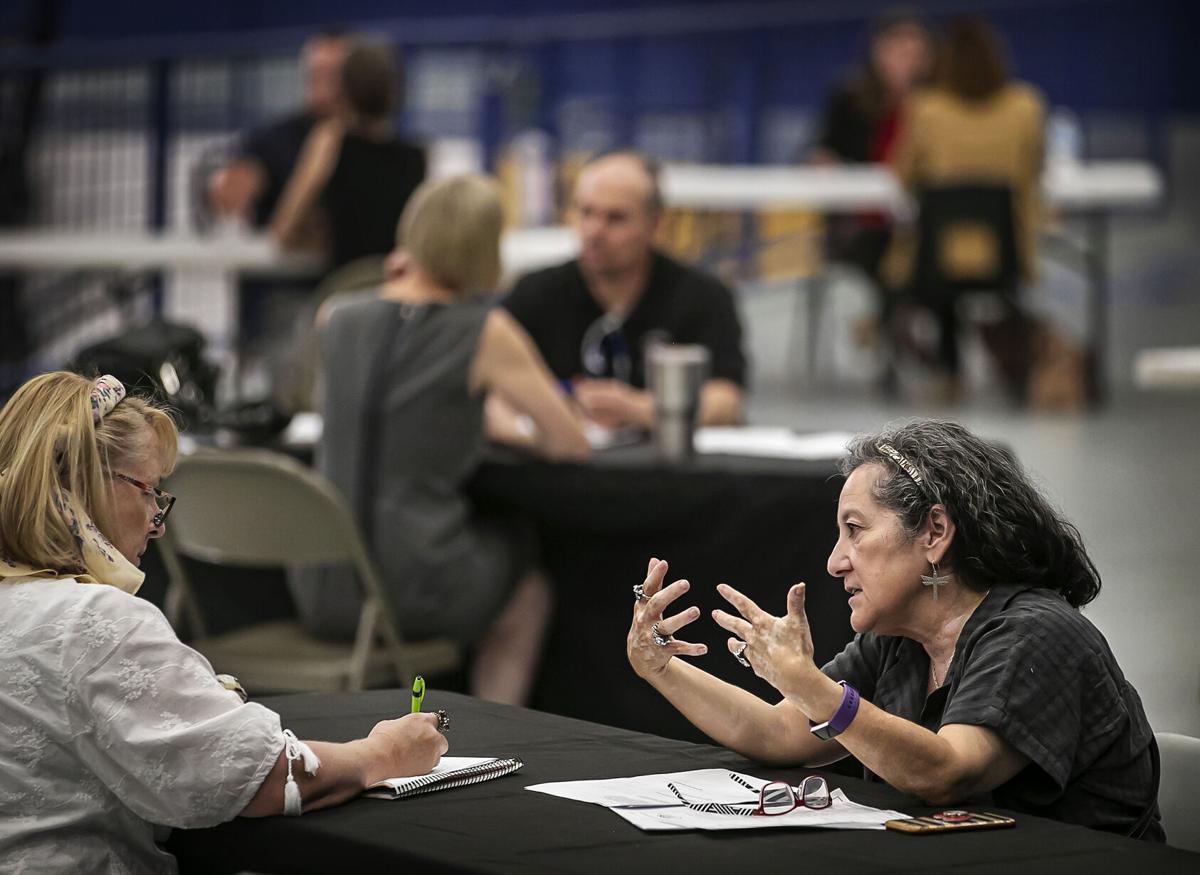 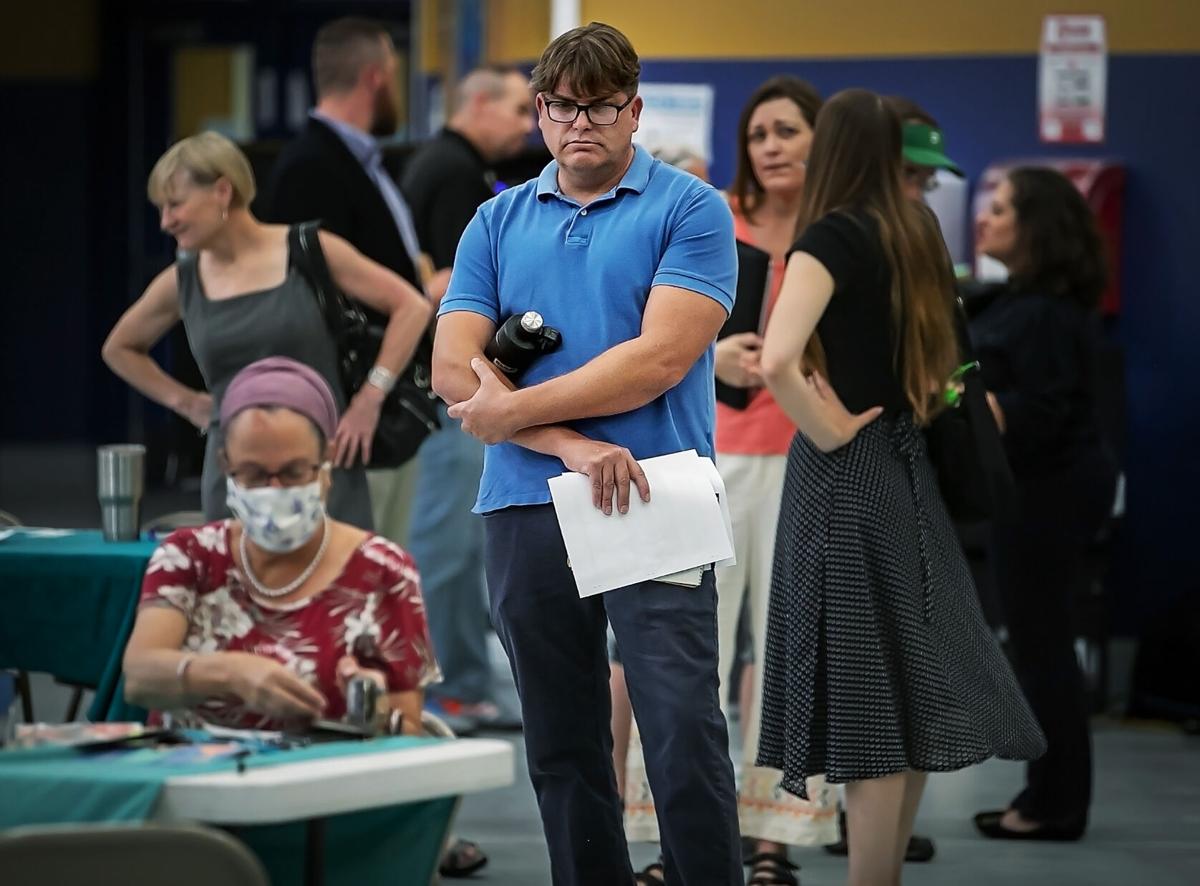 Joshua Winkel waits for his turn to interview during a job fair Wednesday hosted by Santa Fe Public Schools at Santa Fe High School. The goal was to help fill 60 positions for aspiring teachers and substitutes as the new school year rapidly approaches. 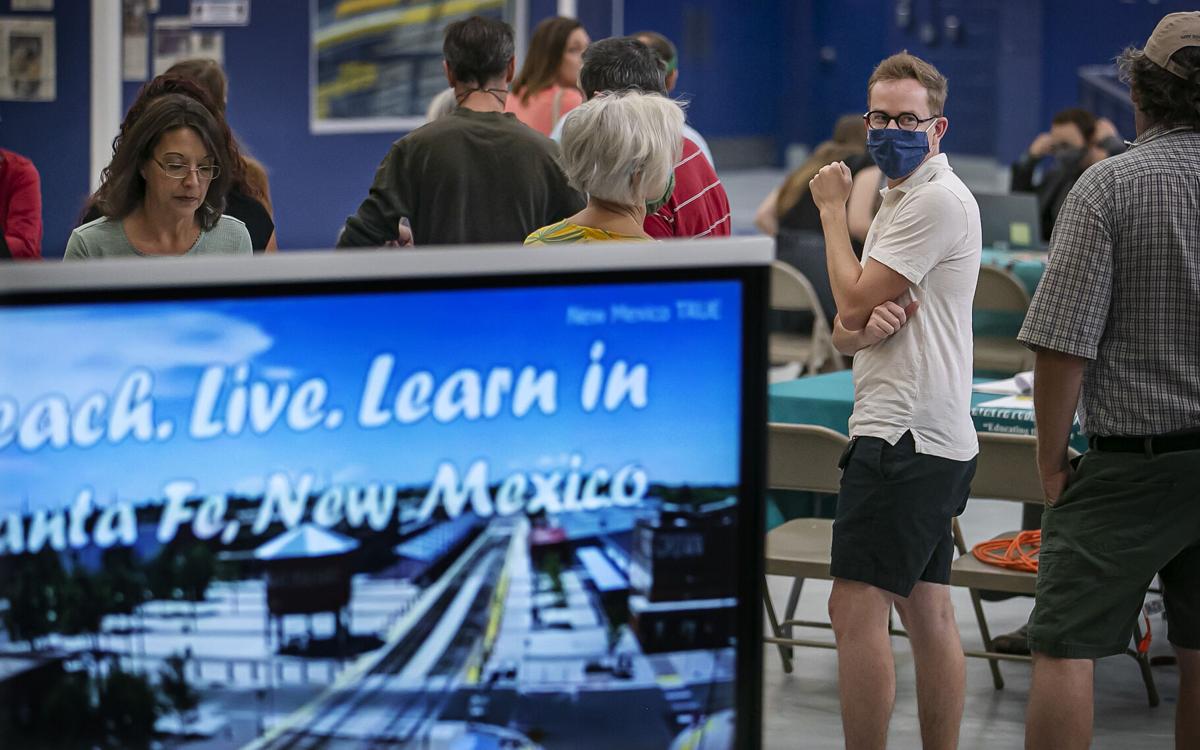 People line up to fill out applications during a job fair Wednesday hosted by Santa Fe Public Schools at Santa Fe High School.

Joshua Winkel waits for his turn to interview during a job fair Wednesday hosted by Santa Fe Public Schools at Santa Fe High School. The goal was to help fill 60 positions for aspiring teachers and substitutes as the new school year rapidly approaches.

People line up to fill out applications during a job fair Wednesday hosted by Santa Fe Public Schools at Santa Fe High School.

A retired justice of the peace, an accountant and a former firefighter could all be heading to classrooms this fall following a job fair for aspiring educators hosted by Santa Fe Public Schools on Wednesday.

Joshua Winkel, who served in the Air Force, worked as a firefighter and has taught at a community college, was among at least 10 people who walked out of Santa Fe High School with a job offer.

Winkel, who grew up in the area and moved back in June, hopes to teach high school students. He has master’s degrees in business administration and emergency management. But now he’s setting his sights on an alternative license to teach either math or science.

He first turned to teaching after health issues forced him to step away from firefighting in Kirtland. He taught fire sciences at a junior college.

“I think I’d start with subbing just to make sure the kids are benefiting, and I’m enjoying it,” Winkel said. “And then kind of work through the program and see how it goes. I think subbing is a good way to start.”

Sharon Eklund, who volunteered at Wednesday’s event and is part of the Interfaith Coalition for Public Education’s leadership circle, knows schools have always struggled to find teachers. But the struggle is bigger this year.

“There seems to me to be some very professional candidates that are standing in line, particularly to [get] alternative licensure,” she said.

Eklund and her colleagues support teachers and school volunteers. She said retaining teachers means having fewer kids per classroom. Having a large pool of substitutes also helps because its allows teachers to pursue professional development opportunities.

“The schools really need substitutes that can free up time for the teachers,” she said.

Winkel and others who received offers were interviewed by principals and district administrators in Toby Roybal Memorial Gymnasium.

Organizers said there was a line waiting out the door 15 minutes before the event began. Howard Oechsner, the district’s human resources director, was pleased with the turnout. He hopes to hire another 60 teachers before the school year begins Aug. 6.

“We’ll put a healthy dent in that number,” he said.

The district has already filled 50 teaching positions and has other openings for counselors, assistants, nursing aides, maintenance workers, administrative assistants and more. But the goal is to find substitutes with bachelor’s degrees and people interested in getting an alternative license to teach in classrooms.

Oechsner said he likely signed more offer letters for potential substitute teachers than he did those interested in pursuing an alternative licensure Wednesday. Those who received an offer will have 48 hours to accept and will need to undergo a background check, Oechsner said.

He noted that the end date for contracts was a week later than last year’s, and because school is starting several days earlier this year, teachers must be back in the classroom a week earlier.

At a recent district town hall on pandemic relief funding, at least one educator in the district raised concerns that area private schools started their hiring process earlier in the year, and that could be part of why the district is left to fill so many spots so close to the first day of school.

Oechsner said the larger amount of openings this year was likely related to the uncertainty of the pandemic.

According to the state Public Education Department, 9 percent of New Mexico teachers were teaching with an alternative license during the 2018-19 school year.

During the 2019-20 school year, 791 students were admitted to alternative licensure programs. According to the Legislative Education Study Committee, those numbers represent a rise, while the traditional teaching workforce continues to see declines across the state.

In the traditional pathway, aspiring teachers obtain a bachelor’s degree in education while studying classroom management and pedagogy. Alternative licenses allow prospective teachers who have a bachelor’s degree to get paid to teach as they work to fulfill license requirements.

But Oechsner isn’t too concerned about the potential for turnover, following the district’s push for alternatively licensed teachers and substitutes. He hopes pandemic relief funds can help pay for licensing programs in the coming school years.

“We have strong supports and mentor programs that they’ll all participate in,” he said. “There are all sorts of opportunities for them to gain support.”