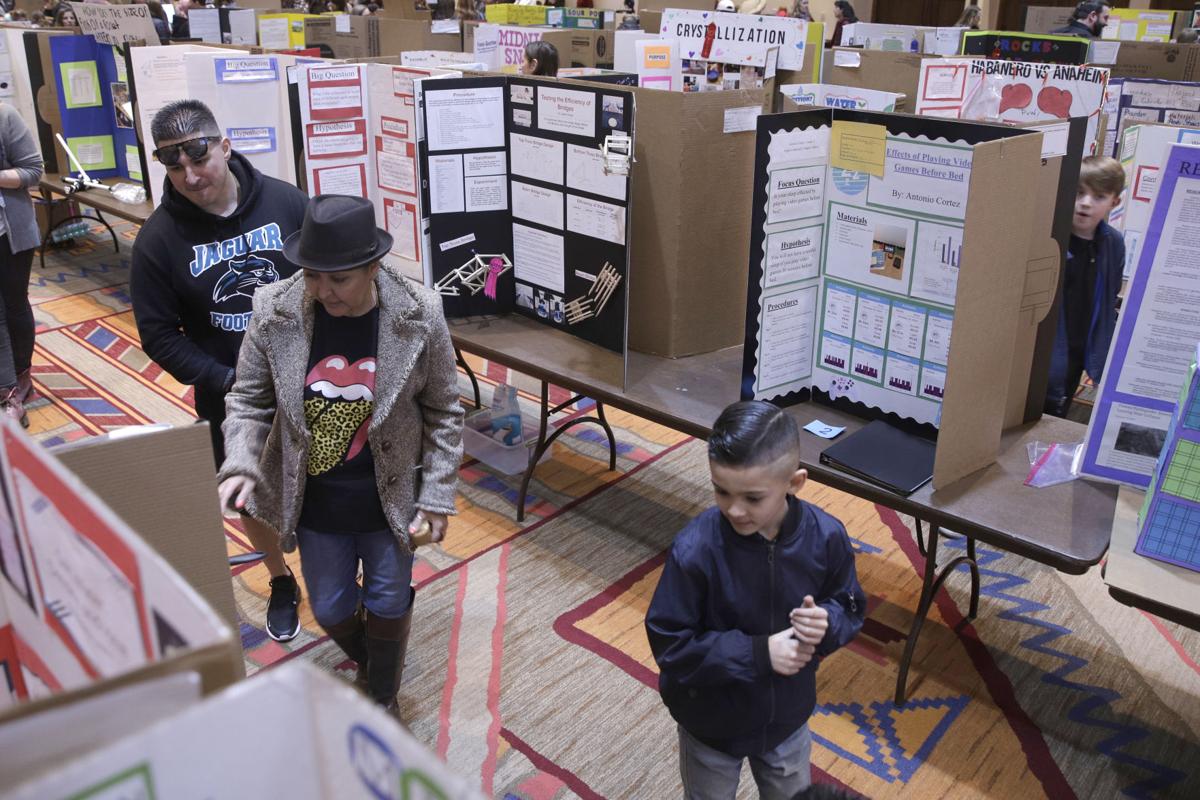 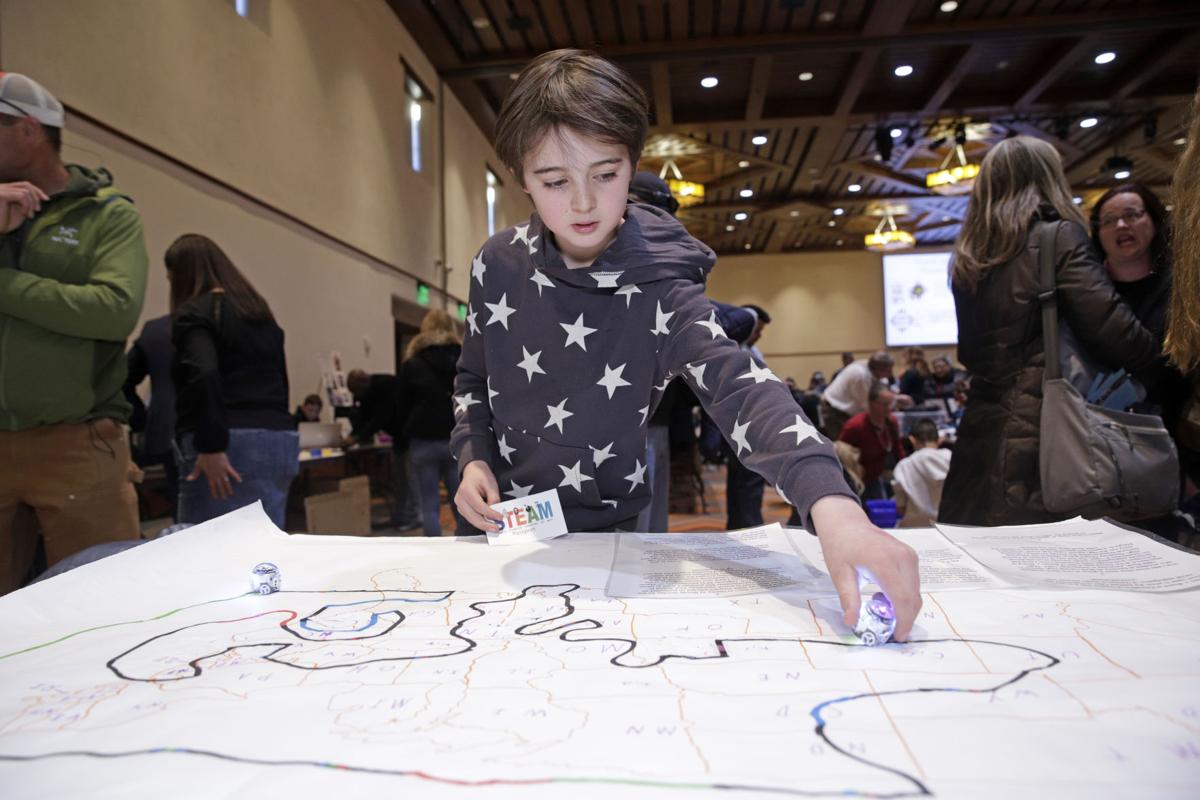 Montgomery Waltz, 12, a student at Acequia Madre Elementary School, sets programmed robots to follow a path through various civil rights events on a map of the United States. He was one of hundreds of students taking part in the Santa Fe Public Schools’ 2020 Innovation Expo. 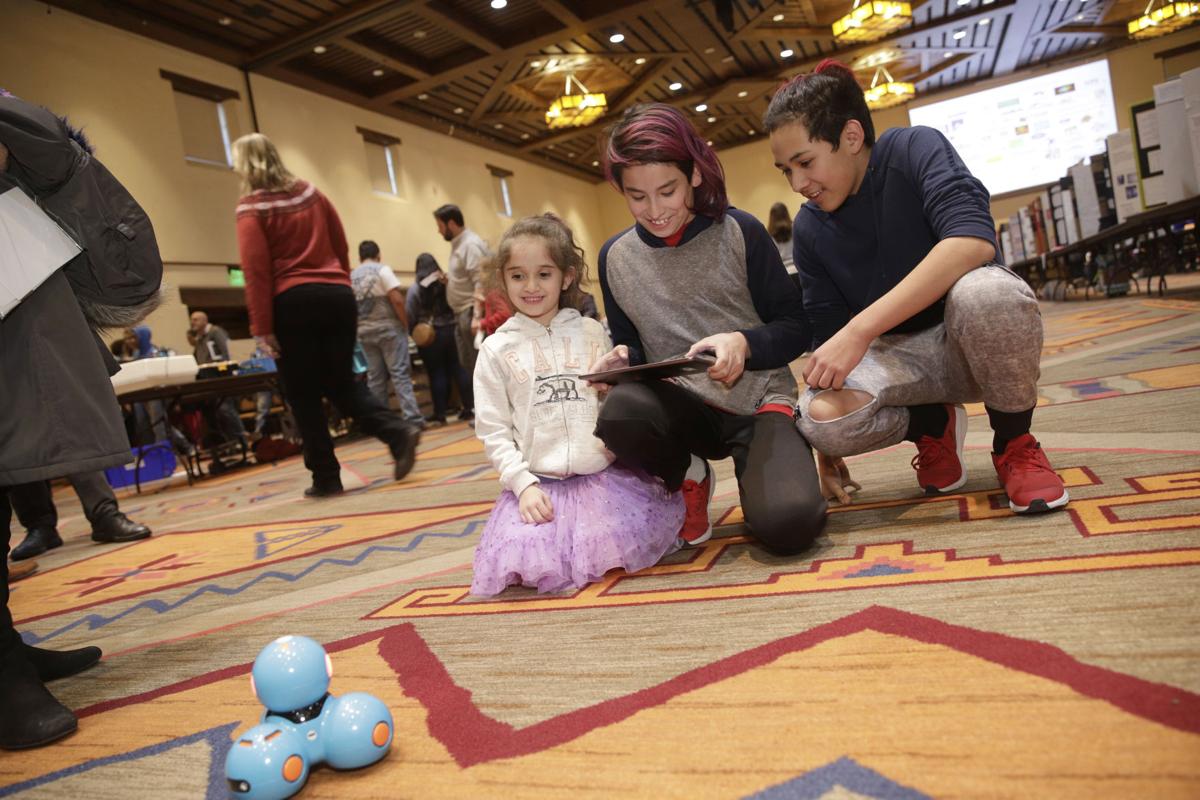 Montgomery Waltz, 12, a student at Acequia Madre Elementary School, sets programmed robots to follow a path through various civil rights events on a map of the United States. He was one of hundreds of students taking part in the Santa Fe Public Schools’ 2020 Innovation Expo.

While he grew up playing store-bought PlayStations, Aaron Encinias can now play video games on a system he built himself.

The Academy at Larragoite senior spent the last two months successfully building his own PC.

“Freshman year, I didn’t know anything about this. I was so clueless. I’m very surprised how far I’ve come in four years,” he said Thursday during Santa Fe Public Schools’ 2020 Innovation Expo.

The science fair at the Santa Fe Community Convention Center featured hundreds of students from every school in the district, who highlighted how a recent emphasis on computer science has pushed them to problem-solve with technology.

In Encinias’ robotics class, students used a 3D printer to produce parts before constructing robot limbs and coding them to move and shake. While teacher Erem Birkan provided loose instruction, there was no textbook.

“We don’t learn how to do this ahead of time. We learn as the process goes on,” junior Isabelle Banner said. “We did make mistakes and we had to take things apart and start over, but I like the fact that we’re learning while doing.”

Trinity Lucero said she also hit snags in her own robotics class. The Piñon Elementary sixth grader presented constructed, motorized carts and measured their speed with and without a container of sea salt attached to the back.

“If they don’t work, you have to take it apart and fix it,” Lucero said. “I like problem-solving like that.”

Jonathan Flanakin, a technology teacher at Ortiz Middle School, whose students identify a community problem, design an app and create a business model aimed at solving it, said computer science works best when kids are finding their own problems to solve.

“These projects are relatable and kids can take ownership of them,” Flanakin said. “It’s all about them choosing the problem they think is important and then learning to solve it with technology.”

In September 2018, the Santa Fe school board passed a resolution directing district leaders to develop a K-12 computer science curriculum within five years that would have the support of the local science and technology sector. Dozens of New Mexico businesses, colleges and universities were present Thursday night.

“When the resolution was originally passed, we were hoping to engage the community in computer science, but we had a long way to go,” said Jennifer Nevarez, director of Community Learning Network, a local nonprofit dedicated to hands-on, real-life learning.

“This is good evidence of all that’s going on to make STEAM [science, technology, engineering, arts and math] available to our kids in Santa Fe so they’re ready to be part of the new workforce,” she said.

Exciting to see the collaboration creative problem solving and creativity in our schools. The Computer Science curriculum is needed well before 5 years. In Education, change moves slowly in times of rapid change.