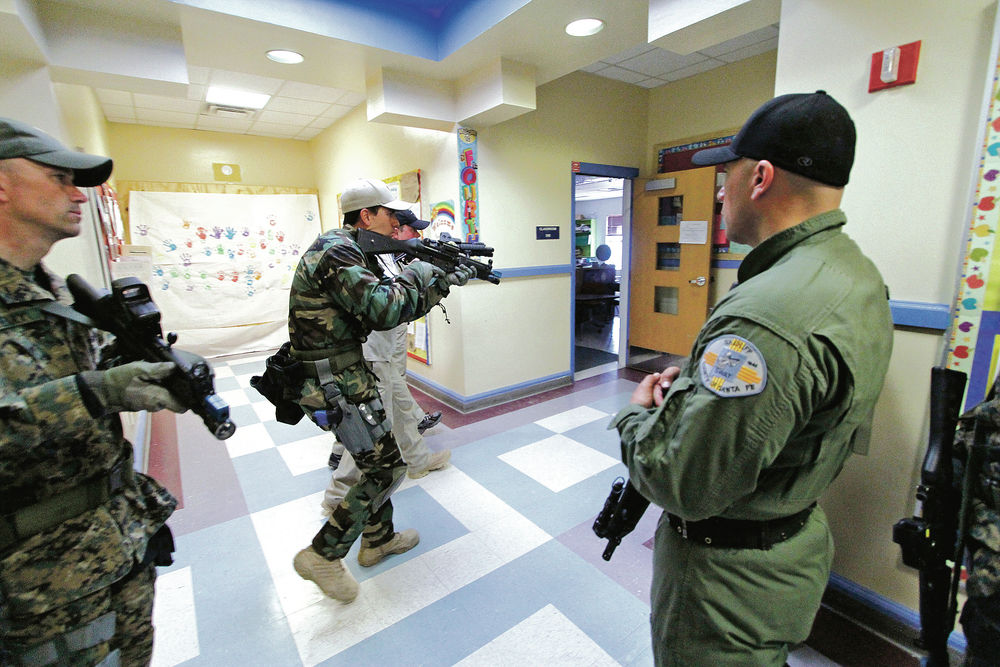 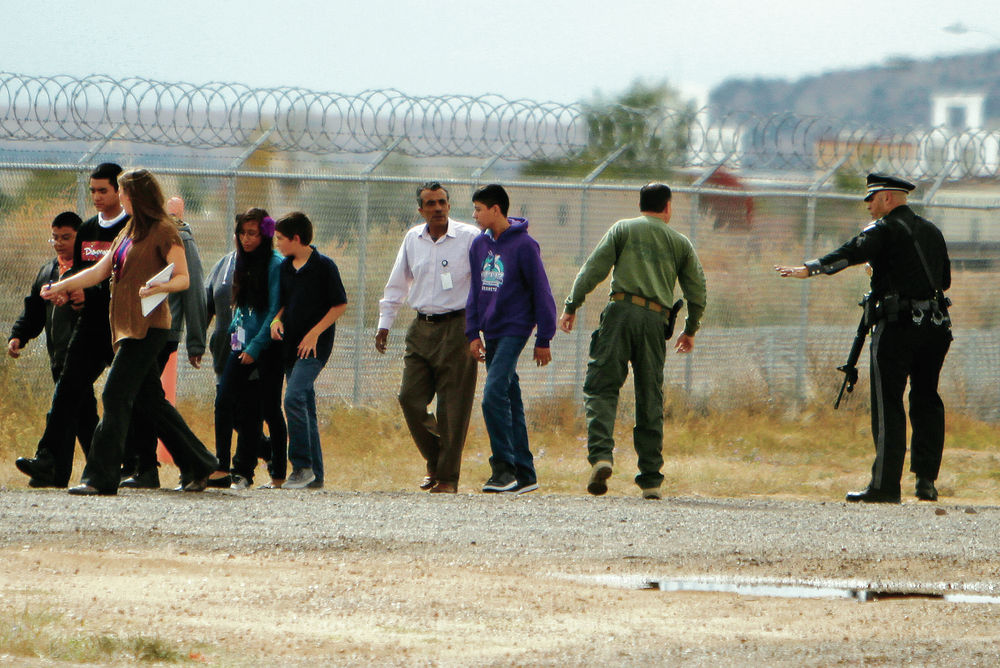 A state police officer escorts a group of Ortiz Middle School students to the New Mexico Law Enforcement Academy on Oct. 9 after the school was evacuated when a starter pistol was found in a student’s backpack. The school was put on lockdown, and students were released to their parents one by one. Luis Sánchez Saturno/The New Mexican 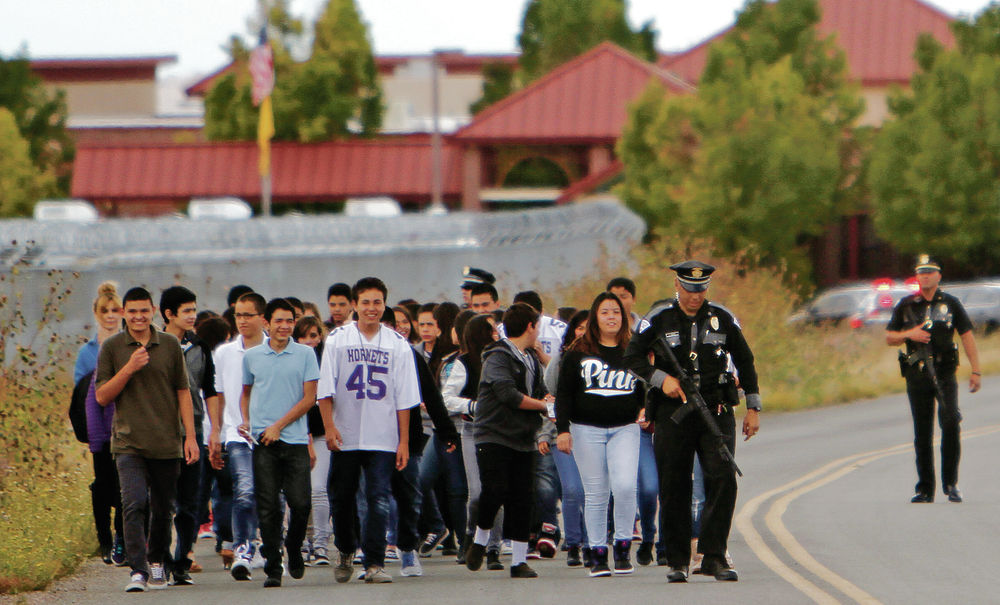 A state Police Officer escorts a group of Ortiz Middle School students to the New Mexico Law Enforcement Academy on Thursday, October 9, 2014, after the school was evacuated. A gun was found in a student's backpack and the school was put on lock down. Students were released to their parents one by one. Luis Sanchez Saturno/The New Mexican

A state police officer escorts a group of Ortiz Middle School students to the New Mexico Law Enforcement Academy on Oct. 9 after the school was evacuated when a starter pistol was found in a student’s backpack. The school was put on lockdown, and students were released to their parents one by one. Luis Sánchez Saturno/The New Mexican

A state Police Officer escorts a group of Ortiz Middle School students to the New Mexico Law Enforcement Academy on Thursday, October 9, 2014, after the school was evacuated. A gun was found in a student's backpack and the school was put on lock down. Students were released to their parents one by one. Luis Sanchez Saturno/The New Mexican

When Ortiz Middle School Principal Steve Baca ordered a lockdown after a security guard found a gun in a student’s backpack earlier this month, English teacher Alexandra Robertson knew exactly what to do. She locked her classroom door, got her kids to help barricade it and said she was ready to use books, staplers and any other blunt objects she could find to fend off anyone who might try to enter.

Robertson’s response was far from fear-driven. It was part of a new approach to dealing with on-campus threats from outsiders called Run, Hide and Fight.

For years many schools relied on a basic lockdown approach of sealing off doors, turning off lights, shuttering windows, and silencing cellphones and other technological devices as a way to deal with an outside threat. But the 2012 massacre at Sandy Hook Elementary School in Newtown, Conn., that left six adults and 20 first-graders dead — as well as a raft of other school shootings in recent years — have forced school safety experts to rethink their approach.

The newest thinking advises escaping if possible, using all means to block the door and — as a last resort — doing everything you can to stop an armed assailant, including throwing a three-hole punch at the shooter.

The idea has added to a continuing debate over how schools should respond to armed assailants on campus. Some of the ideas overlap, with proponents of Run, Hide and Fight advising the “fight” part as a last resort and opponents agreeing that if need be, fighting back is better than acting as a stationary target.

Brad Spicer, president of Safe Plans, a Missouri-based security firm that offers training and advice for implementing security measures to organizations — including school districts — around the county, is an advocate of Run, Hide and Fight. He added that it is not realistic to expect teachers and students to be trained in responding quickly to an armed assailant and that running does not guarantee safety. But he thinks the odds are better for those who plan an escape route.

“We have to get people away from the lockdown response, the idea that hiding under the desk or in the closet makes you safe,” he said.

Not all safety experts agree. Michael Dorn, president of Safe Havens International, a campus safety and security firm based in Georgia, said lockdown, if implemented quickly and correctly, will work. He said Run, Hide and Fight can induce panic and is not a good idea when classes of students jam the hallways in an effort to escape someone who might be in that hallway with a weapon.

Expecting educators to plan a counterattack against an armed intruder is unrealistic, he added.

Dorn’s organization put out a recent report on causes of death in K-12 schools in the United States that uses data from various national groups — including the National Center for Education Statistics — from 1998 to 2012. That report shows that active-shooter cases only account for 4 percent of all deaths in that time period. Rates for homicides (33 percent), school transportation accidents (36 percent) and suicides (9 percent) are much higher.

The Santa Fe school district has begun teaching the new model to schools. The night before the Oct. 9 incident at Ortiz, the Santa Fe Police Department had given a presentation to parents and teachers at the school.

“You have children who are counting on you getting them out of there alive,” Santa Fe police Sgt. Ben Valdez told the assembly of about 50 educators that evening. Active shooters, he said, “are looking for the path of least resistance.” And they know law enforcement officers are coming for them, so they are racing against the clock to inflict damage fast, Valdez said.

Anything educators and students can do to distract or slow down a shooter’s efforts buys emergency response personnel more time, Valdez said. He said previous active shooter tragedies show that, overall, students and teachers who either ran or blocked entrances to their classrooms survived.

Valdez said running is an option if you feel confident that the shooter is far away on another part of campus and if you are not in charge of young children or special-education students. Likewise, escaping out of ground-floor windows is advised, whereas a jump from a second-story window can result in more injuries and more vulnerable targets.

“If they can get out, then we’d like them to get out,” Valdez said.

At both the Virginia Tech shootings of 2007 and the Sandy Hook shootings of 2012, some teachers and students who locked themselves in under traditional lockdown methods did survive or at least bought others more time to escape. Valdez noted that at Virginia Tech, shooter Seung-Hui Cho inflicted the most damage in open classrooms where teachers and students did not always have time to barricade doors. But he also killed some people who attempted to block doors.

Both Spicer and Horn agree that having an armed officer on a school campus is a deterrent. Earlier this month, the school board unanimously approved placing two Santa Fe Police Department officers at the city’s two main high school campuses. However, the Santa Fe City Council last week delayed the move after councilors said the plan wasn’t fully vetted.

Santa Fe police Sgt. Ben Valdez offers the following tips to educators to prepare for any lockdown situation, particularly if there is an active shooter on campus:

• Keep a first aid kit in your room.

• Keep bottled water and snack food appropriate for all students, including those who may have food allergies.

• Have a bucket or two and toilet paper lest you are locked in for a long duration and need to create makeshift bathrooms.

• Keep a roll of duct tape handy and use it to seal your door from the inside, as it can slow down or deter an intruder.

• Know every nook and cranny of your school so you can work your way through it should you choose to escape.

• Tape a piece of paper with your room number on the exterior of one of your windows so emergency crews can find that room quickly if needed.

• Make yourself familiar with firearms so you know how they work and how they might jam or misfire so you and your students have a chance to escape if that happens.

• If it’s clear an armed intruder is going to break into the classroom, teachers should do what they can to muster support from students — particularly at the middle and high-school level — in discouraging entry by joining together to throw books, coffee mugs and other classroom objects at the intruder. He said it is unrealistic to think that elementary school children could help in such a situation.

This is simply unacceptable. They shouldn't let kids even see this weaponry on the territory of school, let alone allow even a slightest chance for student to access it. And then they claim how harmful video games and TV shows are. Moreover they could spend resources where they are actually needed. My son has to use online admission essay writing service because school library can’t afford enough new books. And what about healthcare and sports equipment? I really, hope they will get what education is about. It’s really disappointing to see this kind of priorities.

Utah has allowed concealed carry at all public schools for nearly 10 years. Parents, teachers, staff, administrators, ANYONE can do it. In that time they have had no problems and NO school shootings. Probably just a coincidence huh?

Politicians and the media continue to ignore the lack of access to mental health services/care in this country while accepting that our children have a greater chance of encountering a shooter at their school.
More guns in our schools and police presence in an educational environment are not the answer. How about money spent on meaningful outreach & intervention for troubled or at-risk youth?
Never money for these much-needed services, but yes, by all means, let's throw iPads at the kids and hire an armed guard for every hallway.

What I can't stomach, is all the money spent on the schools and they can't incorporate correct design to hinder these situations. All the doors in my sons school pull out ward. I'm surprised that the Fighting Chance sleeves were not thought about. http://fightingchancesolutions.com/
The teachers have no strap to secure the doors shut. Bad design only equates to mis use of funds.