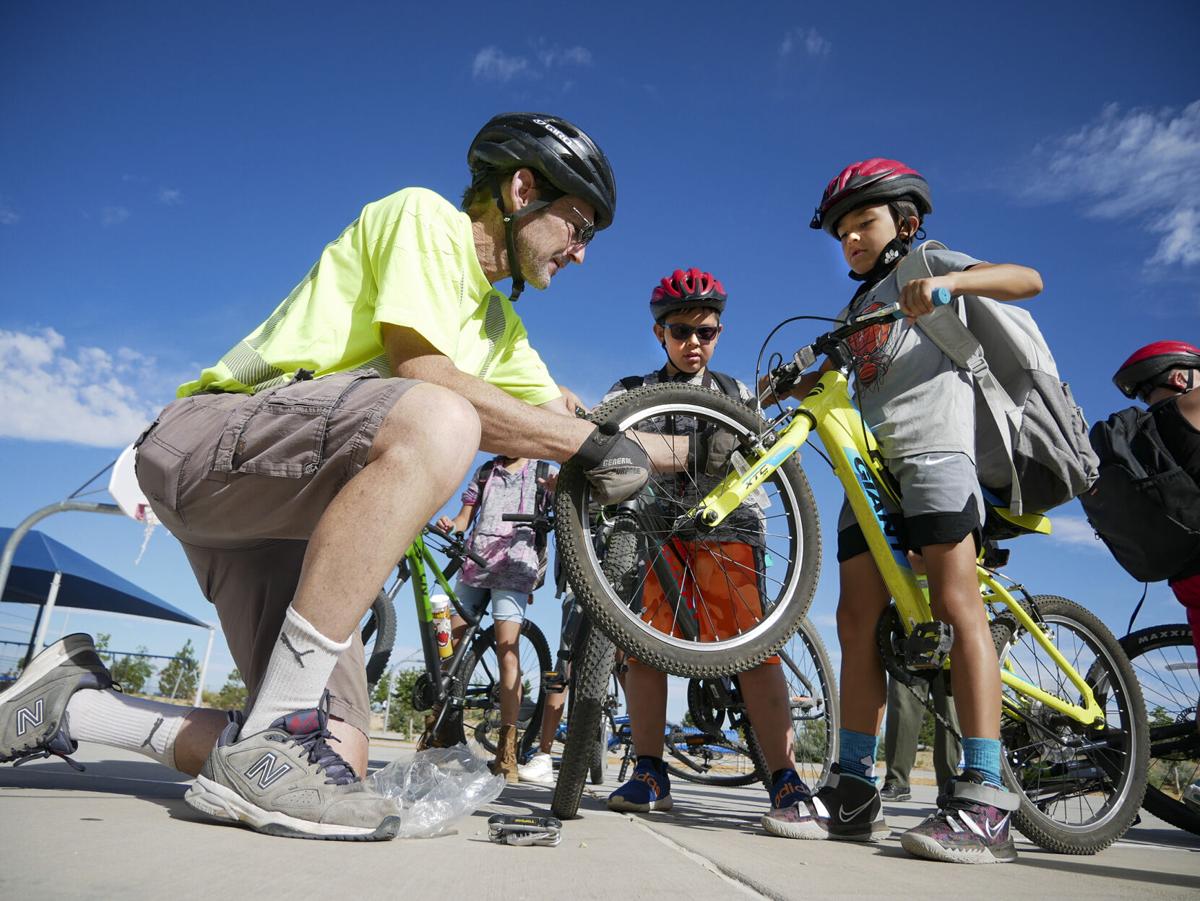 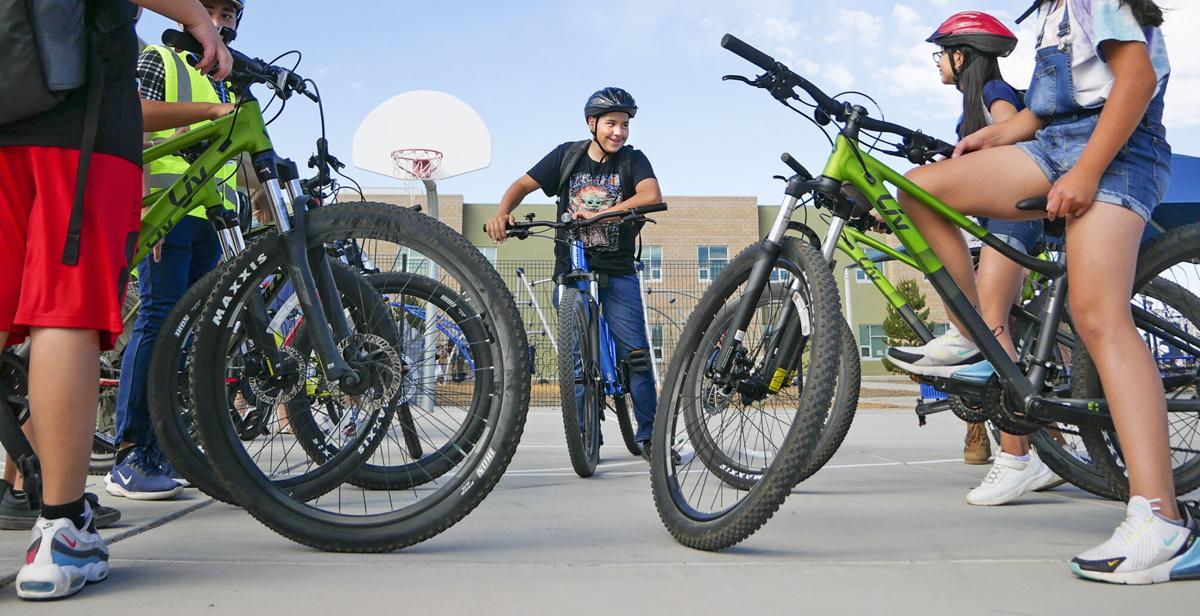 Students of Nina Otero Community School gather June 24 to go on a bike ride. The Safe Routes to School program is working to enable kids to bike or walk to school. 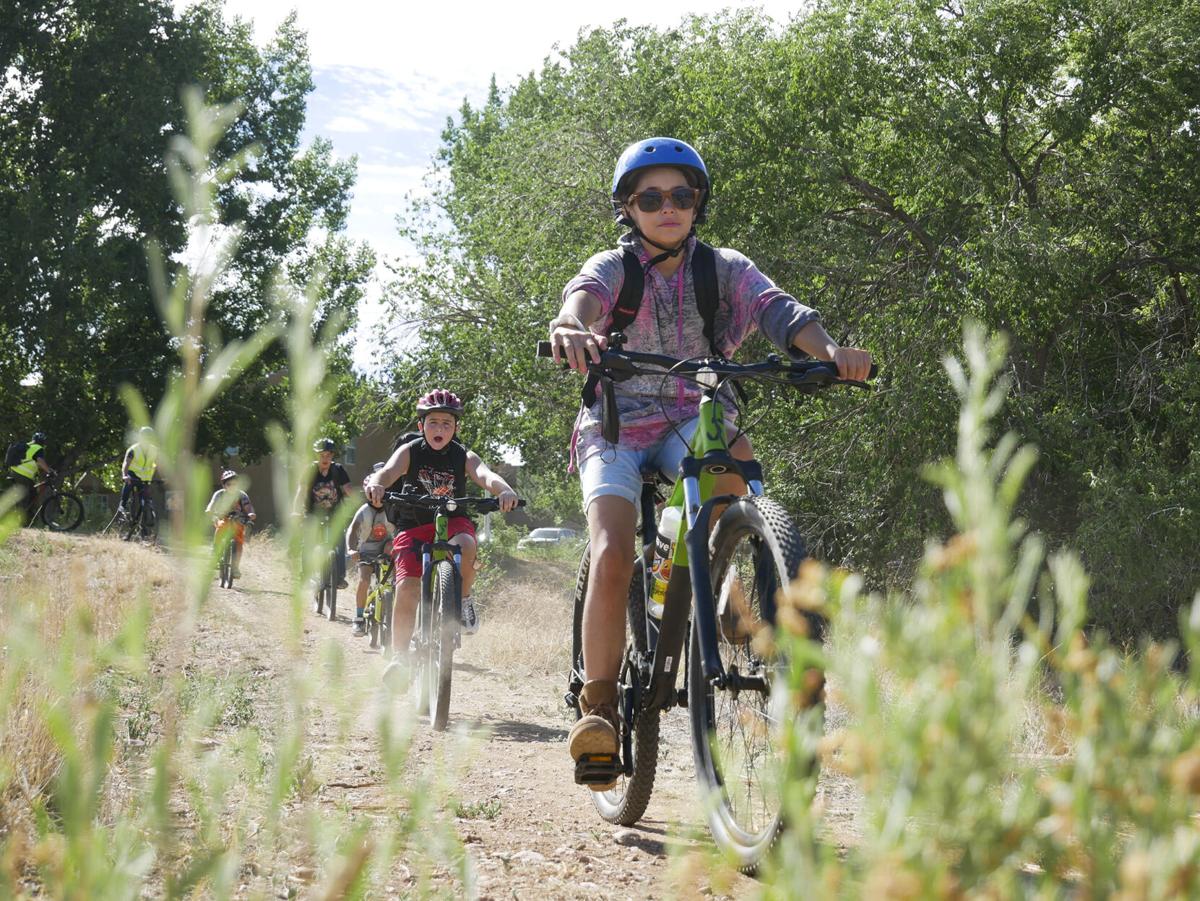 Students of Nina Otero Community School gather June 24 to go on a bike ride. The Safe Routes to School program is working to enable kids to bike or walk to school.

Jalea Mendoza will return to Nina Otero Community School in the fall with a whole new set of ABCs: air, brakes and chain.

Only it’s not for spelling. It’s for making sure her bike is safe to ride.

She’s one of dozens of students at Nina Otero and El Camino Real Academy who are receiving bike safety lessons this summer as part of a citywide effort to get kids biking and walking to school.

On a recent Thursday morning, Jalea and other students rode along the Acequia Trail from Nina Otero toward Sweeney Elementary. Jalea, who will enter the fifth grade, maintained a medium speed on her bike, mindful of rocks and bumps along her path so as not to fall. She said the ride was awesome. Quick, but tiring.

Jalea lives near SWAN Park, she said. Her family has bikes at home.

“I’ve been wanting to bike to school,” she said. “But I’m too young to go by myself. But maybe my mom could bike us to school sometimes.”

Santa Fe is piloting a Safe Routes to School initiative through the city’s Conservation Trust with a heavy focus on the city’s south side.

The program is funded with $300,000 in federal grants and a nearly 15 percent match from the city of Santa Fe.

The money will pay for staffing and a Safe Routes consultant, Chuck Malagodi, who will help build staff and volunteer groups to keep bike safety a top priority in and out of the classroom.

Funding will also be spent on experts in fields like geographic information systems so people involved in the initiative can recommend improvements to trails, sidewalks and crosswalks around town.

“We’ll be looking into improvements on campus areas,” said Tim Rogers, Conservation Trust trails program manager who’s also the Safe Routes coordinator. “We have all been working primarily on the south side.”

Safe Routes initiatives span the nation, emphasizing pedestrian and bike safety for kids getting to school. A Safe Routes program in Las Cruces, Rogers said, is possibly the only comprehensive one in the state.

A 2015 study showed that the longer Safe Routes initiatives were in place, the more kids started walking and biking to schools.

This past spring, 118 bikes were brought to Santa Fe schools from a nonprofit called Free Bikes 4 Kidz New Mexico.

In fall, fourth graders at César Chávez, Ramirez Thomas and Sweeney elementary schools, as well as at El Camino Real and Nina Otero, can expect bike and pedestrian safety lessons as a regular part of their physical education classes.

Kayak has dreams of a Santa Fe where kids are free to safely bike and walk to and around school. In the Netherlands, she said, there are zones surrounding some schools where cars are prohibited.

Reliance on biking and walking have obvious benefits, she said in an interview.

“We reduce the congestion that’s around the schools. We reduce the amount of air pollution that’s colorless and odorless,” she said. “The obvious is that we’re reducing our use of fossil fuels.”

It could also be a big cost saver. According to a 2020 analysis conducted by district transportation director Alyce Leck, eliminating one bus route around Cottonwood Village Mobile Home Park, where a third of El Camino Real’s 700-plus students live, could save the district more than $29,000 a year.

Of course, Kayak said, none of these benefits could happen without community support and funding.

“If the infrastructure really doesn’t support this, as a parent, I’m not going to say, ‘OK, kids, let’s jump on our bikes and cross Airport Road,’ “ she said. “We’re not going to do it. Cerrillos is also a very difficult crossing.”

Rogers said connecting the two entities was a top priority. As the city works to complete its 10-mile River Trail, which would pass through the area, Rogers hopes this connection is made first.

“It’s a short connection that’s needed; the demand is obvious,” he said.

It advocated for the completion of multiuse trails in the area, including the connection between the mobile home park and El Camino Real.

It said the area has been “severely overlooked” during past development and infrastructure planning around the city, specifically examining a 3.3-mile portion of southern Santa Fe just west of Agua Fría village, which encompasses both El Camino Real and Ramirez Thomas Elementary.

The area is more diverse than other parts of the city, with many residents who are lower income. Overwhelmingly, people who live there face long commutes to their jobs.

It’s near the busy Veterans Memorial Highway and Airport Road, where speed limits range from 40 to 55 miles per hour in a state with the second-largest amount of pedestrian deaths from 2010-19, according to U.S. News & World Report.

And while 58 percent of Santa Fe County lives within a half-mile of a park entrance or trailhead, on the south side, it’s more like 27 percent.

Rogers and Kayak both hope to see that change.

Rogers said the initiative focuses on the south side to create equity, and because Nina Otero and El Camino Real have staff who are particularly excited about making biking part of school culture.

“The main objective is getting more kids walking and biking to school,” he said. “And if we’re successful in doing that, then that will be a visual change, and hopefully a self-reinforcing thing.”

He hopes it will encourage safer driving habits and encourage others to try walking and biking themselves.

While the south side has the infrastructure for more comprehensive trail networks, it is often too far for biking to places like grocery stores, Rogers said, though he believes better trails could easily get kids to area schools.

Correction: This story has been amended to reflect the following changes: An earlier version gave an incorrect name for an organization providing free helmets to kids. The group is the state's Brain Injury Advisory Council. The story also wrongly attributed a nearly 15 percent local match to a federal grant for Safe Routes to Schools to the Santa Fe Metropolitan Planning Organization. The city of Santa Fe provided the grant. The story incorrectly said sustainability coordinator Elena Kayak pointed to car-free zones around schools in Norway. She was referring to the Netherlands.

The issue of making sure our infrastructure supports these projects is spot on. If we build roads like Cerrillos and Airport and somehow expect our kids to get across them rather than providing safe passage, we are really embracing Darwin's Survival of the Fittest, as an Espanola transportation manager once quipped to me at a regional meeting when I was chair of the Los Alamos County Transportation Board.

I doff my helmet off to all who are working to make this project a success.

If the kids are expected to ride or walk to school, shouldn't the teachers and staff be doing so and setting the example?

Well for one thing, the teachers often have to haul reams of paperwork because they haul massive piles of papers home to correct and haul them back, while at the same time having to schlepp boxes full of school supplies for the kids on a regular basis. But on the occasions when there isn't major cargo to haul, yeah, the teachers could benefit from a walk or bike ride as well.

There are a number of staff at El Camino who do already bike to work.

I don't know if that guarantees the staff are living that closely but if our infrastructure and home prices encourage folks to live close to where they work, I imagine many will do so.

In a related story, we see that the median price of a home in Santa Fe is likely putting home ownership out of reach of teachers, cops, firepeople, and other civil servants. We can't have it both ways.

By the time I graduated from high school I had lived in and attended school in twelve districts around the country, some urban, some suburban, some rural and some on Air Force bases. For the vast majority of them, I walked or biked to school (or used a skate board). I think it's great if kids can do this, it would help reduce the obesity crisis, would give them a better frame of mind for the day for having had the fresh air and a little exercise. Of course so many drivers today are impatient, inconsiderate, pathologically uncaring about child safety if it inconveniences them, so we'd need safe routes that are monitored and the follow-through to hold bad actors accountable. I see no reason why this couldn't be possible. I hope a way is found to have more kids get to school self-propelled. Happier, healthier kids with better capability to learn.

It looks like there is a gate open in someone's backyard the kids might use to walk or bike to school from the Cottonwood development. I remember cutting through people’s backyards as a kid to shorten the walk to the bus stop even, as well as biking on busy streets to get to school (before there were such things as bike lanes) My parents must have been so trusting!

There are apartments going up on the other side of El Camino Real Academy. Is there a sidewalk planned to get the kids who will live there to school easier? Gated & fenced developments like this should have some provision planned to get pedestrians and bikes to close by places more conveniently like a pedestrian gate. If outsiders really need to be excluded, maybe put a lock on the gate with a code?