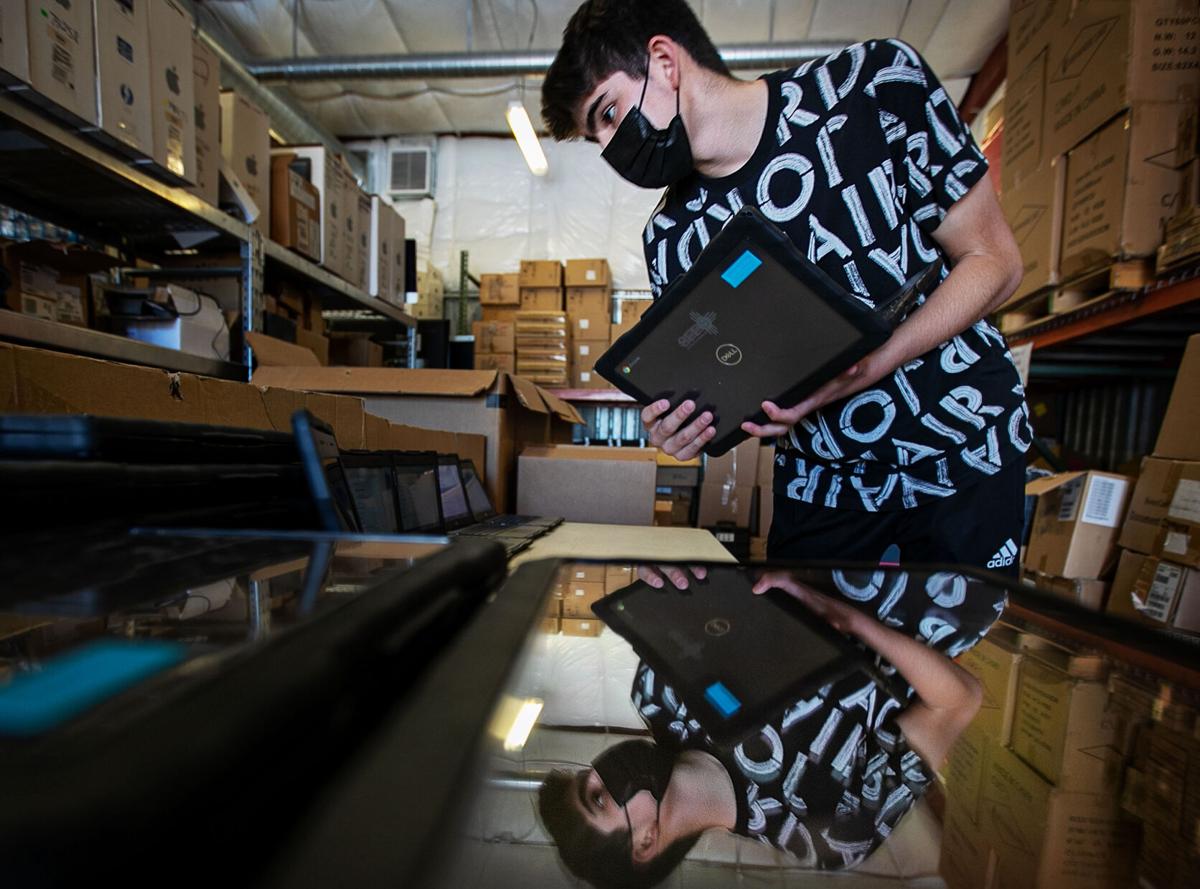 Isaiah Montoya updates the software on laptops in the Santa Fe Public Schools Technology Department warehouse as technicians distribute new Chromebooks on July 15 to replace tablets issued to younger students. A strategic plan released this summer by the state Public Education Department aims for every high school to offer at least one computer science class by 2023, and in some cases kindergartners would receive hands-on computer learning. The state also plans to fund scholarships to aid teacher recruitment in the subject. 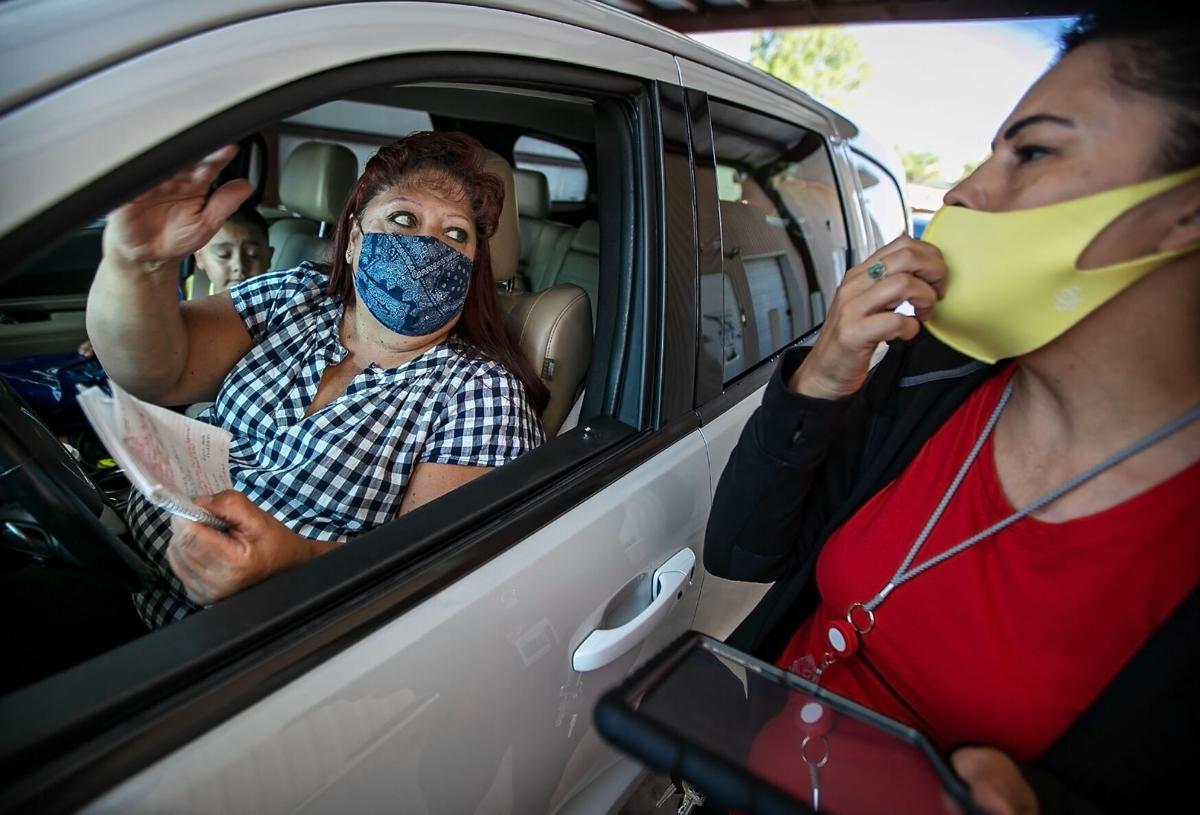 Isaiah Montoya updates the software on laptops in the Santa Fe Public Schools Technology Department warehouse as technicians distribute new Chromebooks on July 15 to replace tablets issued to younger students. A strategic plan released this summer by the state Public Education Department aims for every high school to offer at least one computer science class by 2023, and in some cases kindergartners would receive hands-on computer learning. The state also plans to fund scholarships to aid teacher recruitment in the subject.

Math, science and language arts have long been pillars of a public school education. Paige Prescott would like to add computer science to that group.

In virtually every industry, people need to know how to use a computer. Yet just 32 percent of New Mexico schools taught computer science during the 2019-20 academic year.

“In order for New Mexico to remain competitive to bring in companies of high value, they’re going to need to have students that are capable of jumping into tech jobs,” said Prescott, executive director of the Computer Science Alliance, a Santa Fe-based nonprofit. “We have such demand in the workforce in New Mexico.”

A strategic plan released this summer by the state Public Education Department aims to meet that demand. Under the plan, every high school would offer at least one computer science class by 2023, and in some cases kindergartners would receive hands-on computer learning.

By 2026, teachers would get computer science endorsements through state-funded scholarships and incentives, and computer skills would be fully integrated into the high school curriculum.

The state touted the plan as an expansion of Gov. Michelle Lujan Grisham’s goal to get more students ready for the 21st century. As part of the plan, computer science will be taught as a standalone class and incorporated into other courses.

“It will be critical to facilitate support for educators in knowing how to teach computer science and fit it into their day,” said Gwen Perea Warniment, the state’s deputy education secretary. “I think it’s not so much a question of something else moving away.”

She added: “It’s going to be something that’s integrated in what we teach and how we teach.”

The first year Brian Smith, the sole computer science teacher at Santa Fe High School, taught the programming language JavaScript, he was taking the class himself. He managed to stay a couple of chapters ahead of his students as he worked his way through the textbook.

“That’s a little nerve-wracking,” he said.

Smith, who sat on the advisory committee that helped develop the state’s strategic plan, hopes it will make it easier for teachers to bring computer science to their schools.

During the last legislative session, state lawmakers adopted a policy that requires the education department to design a computer science endorsement for the state’s secondary school teachers by the end of the year.

It also calls for universities to offer classes on computer science and the methods behind teaching it to different age groups.

Santa Fe Public Schools is one of the few districts in New Mexico that has a strategic plan for computer science education. The subject is incorporated into other classes as part of the districtwide plan, Smith said.

But without state policies, visions of universal computer science learning in New Mexico won’t come to fruition, she warned.

“You can put a plan in place, but we will want to see a little bit of teeth behind that,” Prescott said. “Things like policy can get that last level of schools, where it’s harder for them for whatever reason, getting them to that level of taking on computer science and scheduling it.”

There is talk of advocating for a bill that would make computer science classes a graduation requirement for high school students, she said. But a mandate would require funding.

In 2018, the Public Education Department adopted K-12 standards from the national Computer Science Teachers Association on computer science in schools. That puts New Mexico a couple of steps ahead of other states, she said.

Students who take up a subject in elementary or middle school are more apt to build confidence and stick with it in high school, studies show.

In Las Cruces Public Schools, programmable robots, computer circuits and other technology are incorporated into the elementary school curriculum. By the time students hit middle school, they have opportunities to learn the coding language Python. Next year, eighth graders will be able to take a class on data science and cybersecurity.

It wasn’t always that way. A few years ago, gaps in computer science education were wide. Some elementary school students had access to 3D-printing technology, while others only used computers when taking tests.

Interest in computer science classes among students entering high school is growing — almost beyond the district’s capacity to teach those classes, Hufstedler said.

“We wanted to make sure every student had a minimum foundation, and a minimum set of opportunities to join in and engage in computer science,” she said.

Congratulations. This is one of the most important steps the schools can make. Technology touches every subject without exception. Tech is the passport into good paying jobs.

I agree with Tom. Developing skills in technology and computer science is critical in our 21st century world. Imagine if New Mexico was a hotbed of talent for leading edge, high paying professions like cybersecurity and data analytics. Imagine the industry that this could create in New Mexico. The new strategic plan is a great start!