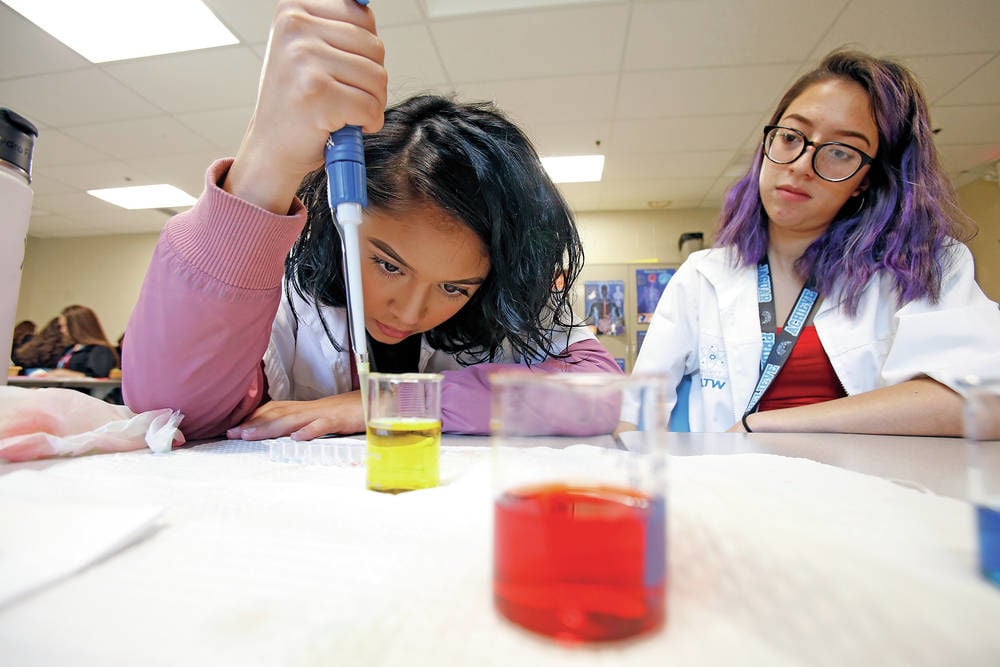 Keiry Lopez Ruvalcaba, left, and Samantha Olivas, both 17, practice basic lab skills with pipettes Friday in a medical interventions class at Capital High School. Such classes are intended to help students who may go straight into a career after high school as well as those who may go on to college or later medical school. Luis Sánchez Saturno/The New Mexican 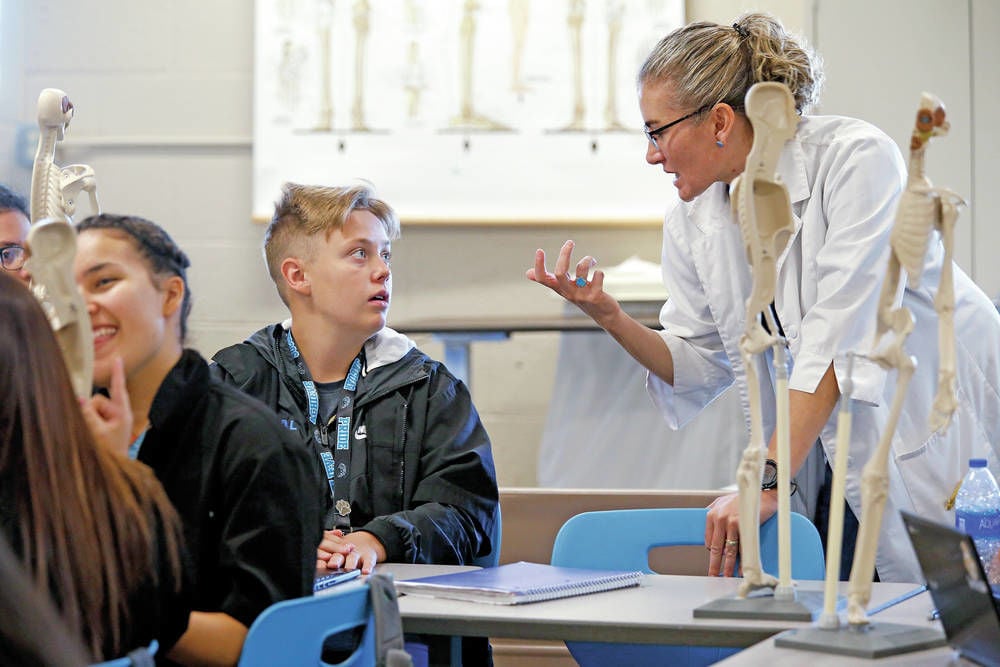 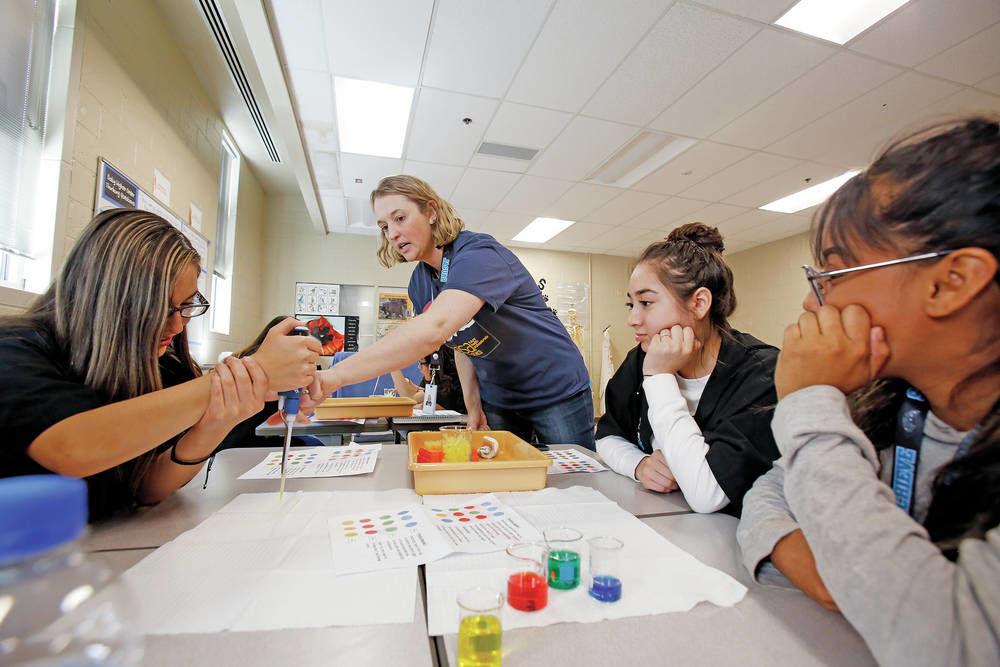 Keiry Lopez Ruvalcaba, left, and Samantha Olivas, both 17, practice basic lab skills with pipettes Friday in a medical interventions class at Capital High School. Such classes are intended to help students who may go straight into a career after high school as well as those who may go on to college or later medical school. Luis Sánchez Saturno/The New Mexican

In the science wing at Capital High School, sophomores learn to zoom in and out with microscope lenses while juniors poke rubbery muscle tissue on mannequins.

They are learning in a class that feeds into a medical sciences career pathway, one that culminates with a senior internship in a hospital or doctor’s office.

In Santa Fe and elsewhere, the old curriculum model that once separated students pursuing blue-collar skills from those headed toward higher education has been replaced by a strategy that exposes students to both possibilities — career options and college-track courses.

In other words, Capital’s medical science classes include students who want be ambulance technicians and those intent on becoming brain surgeons.

That’s no accident. Reacting, perhaps, to old criticisms and new realities, public schools, community colleges and local employers are trying to create better training grounds for students. And as the nation marks Labor Day, observers say such an effort has never been more important.

“People would go into career and technical education 20 years ago because, oh, you know, they were good with their hands and they kind of got shuffled of to areas like automotive or welding,” Santa Fe Community College President Rebecca Rowley said. “And there’s nothing wrong with that, but now I think career technical education is seen as much as a viable option as any other road. These are well-paying jobs.”

Some numbers bear that out. With two-year community college degrees, nurses, film technicians and auto mechanics often start with salaries around $40,000 a year. At Los Alamos National Laboratory, a technician with an associate’s degree and a few years’ experience can make more than $60,000 a year.

For business owners looking to recruit more high school graduates into these fields, the hope is that money talks.

“The community college route doesn’t seem to me like the hardest sell,” said Capitol Ford Vice President and General Manager Zach Brandt, who notes there are 30,000 openings across the country for automotive technicians with an associate’s degree .

“Good technicians in our shop make six figures. And it’s something you can do without huge student loans.”

At Santa Fe High, such tracks are optional, but about half the students are enrolled in engineering, culinary arts or computer science.

At Early College Opportunities High School, each student can enter one of three automotive pathways as well as building trades, welding or agriculture.

Most pathways contain a three-course succession as well as dual-credit and certificate opportunities at Santa Fe Community College. This year, a pilot program between Capital High and the community college is giving 14 juniors in the medical science pathway a chance to graduate from high school as licensed practical nurses. Those students gain both an immediately employable skill as well as insight into other potential medical careers.

“I’m not entirely sure what I want to do in the medical field, so I’m kind of using this opportunity to know if I have what it takes. I want to know what I want to do by the time I graduate,” Capital High junior Isabel Jurado Herrera said. “If you don’t have a plan for what you’re doing in school or after school you kind of feel like you don’t have control over your life. Being in a pathway gives you some choice in what you’re going to do.”

While a student at Capital, Breanna Palmer thought she was bound for the Santa Fe University of Art and Design. When it closed during her senior year, the scholarship she’d won there was useless.

But she’d been on the film pathway and decided to carry over some of the dual credits she’d earned to a film program at Santa Fe Community College. There, she met mentors who are union members in the International Alliance of Theatrical Stage Employees. Once connected to the industry, she landed a job as a grip and electrical technician on a television show shooting in New Mexico.

When she graduates from SFCC in May, Palmer said she will have enough hours to join the union and start earning around $30 an hour.

Stories like Palmer’s buoy those who champion career and technical education, in part because it shows the influence schools and industry can have on a student — and how that combination can be of value to the workforce.

“You need higher ed and community colleges partnering with school districts, but the third piece of this puzzle is industry,” state Public Education Department Deputy Secretary Gwen Warniment said. “That industry-driven piece is almost more important in New Mexico because we are such a rural state.”

In Santa Fe, finding local talent at an early age is key in the hospitality industry, where there are plenty of jobs and too few people to fill them.

“Labor is tight here. We have a lot of a lot of open positions here,” said Tom McCann, regional vice president of operations for Heritage Hotels and Resorts, which operates hotels throughout the state. “That’s why we need the community college. The more successful the community college, the better off our industry and every industry will be.”

This fall semester, the Santa Fe Lodger’s Association is providing 14 students with a partial scholarship to the college’s Hospitality and Tourism program. McCann said seven of those students are his own employees looking for a promotion from server to supervisor or to add some industry knowledge.

McCann and other hiring managers around Santa Fe say community college programs are successful at producing the skilled workers they need. The problem is in quantity, not quality.

“Quite simply, we need more kids,” said Brandt, who notes the automotive industry, like hospital and health care, is looking for students who can transition to the workforce.

“We’re committed to building that bridge to the community college and the high schools because we want to catch any kid who might be interested in any automotive career and keep them local,” he added, noting his garage has helped implement part of the curriculum for the college’s auto-tech program and has donated an engine for students to work on at Early College Opportunities.

In some ways, Santa Fe is fortunate: Existing school and industry infrastructure has eased the expansion of the district’s career technical education program. Elsewhere in the state, dollars are thin when it comes to launching new career technical programs off the ground.

“It’s almost impossible to start on of these programs if you haven’t already had it,” said SFCC’s Rowley, who spent much of her education career in rural Eastern New Mexico. “They’re expensive programs to run. All of their equipment is expensive. You can’t grow without adding faculty.”

Still, some try. In Western New Mexico, some of the Gallup-McKinley County Schools’ nine high schools are more than 100 miles apart. But by next school year, the district is planning to require all students to enter one of at least three career pathways at each high school.

To ease the transition, the district received a $360,000 grant from the state to buy 3-D printers, lab materials, and other technology needed to bring curriculum into the modern day.

That shift requires staff changes as well. When a teacher drops one science class to take over an engineering course, the rest of his or her science classes become more crowded. For other career pathway classes, such as a medical coding class at one rural high school, Lovato said she is turning to an online course because no licensed teacher is available.

“When making this transition, you have to get creative to get around some barriers. The system isn’t set up to provide you a teacher who can teach biomedical engineering and architecture,” Lovato said. “It’s a huge shift from when we though of career education as Welding I, Welding II and Welding III. In a career pathway like architecture or health science, you develop a three-course sequence that allows students to explore that profession from a four-year college lens to an entry-level job out of high school.”

Gallup-McKinley County Schools provides dual credit to its high school students by either busing students up to 100 miles to the University of New Mexico-Gallup campus or Navajo-Technical University in Crownpoint — whatever it takes to combine public schools, higher learning and local industries to put students on a career path.

Across the state, educators and employers say the career pathway is the educational model of the future in New Mexico. And those who who have already benefited say the more pathways, the better.

“I think New Mexico should do career pathways with as many programs as possible. I remember hearing about how good the medical program was at Capital,” said Breanna Palmer. “When high school and colleges partner up, and then colleges have working professionals to guide you, that’s what really worked for me. I didn’t know what I was doing at 16 and 17, but I was able to slowly figure it out.”

Dig this: Miners to replace Redskins as school mascot