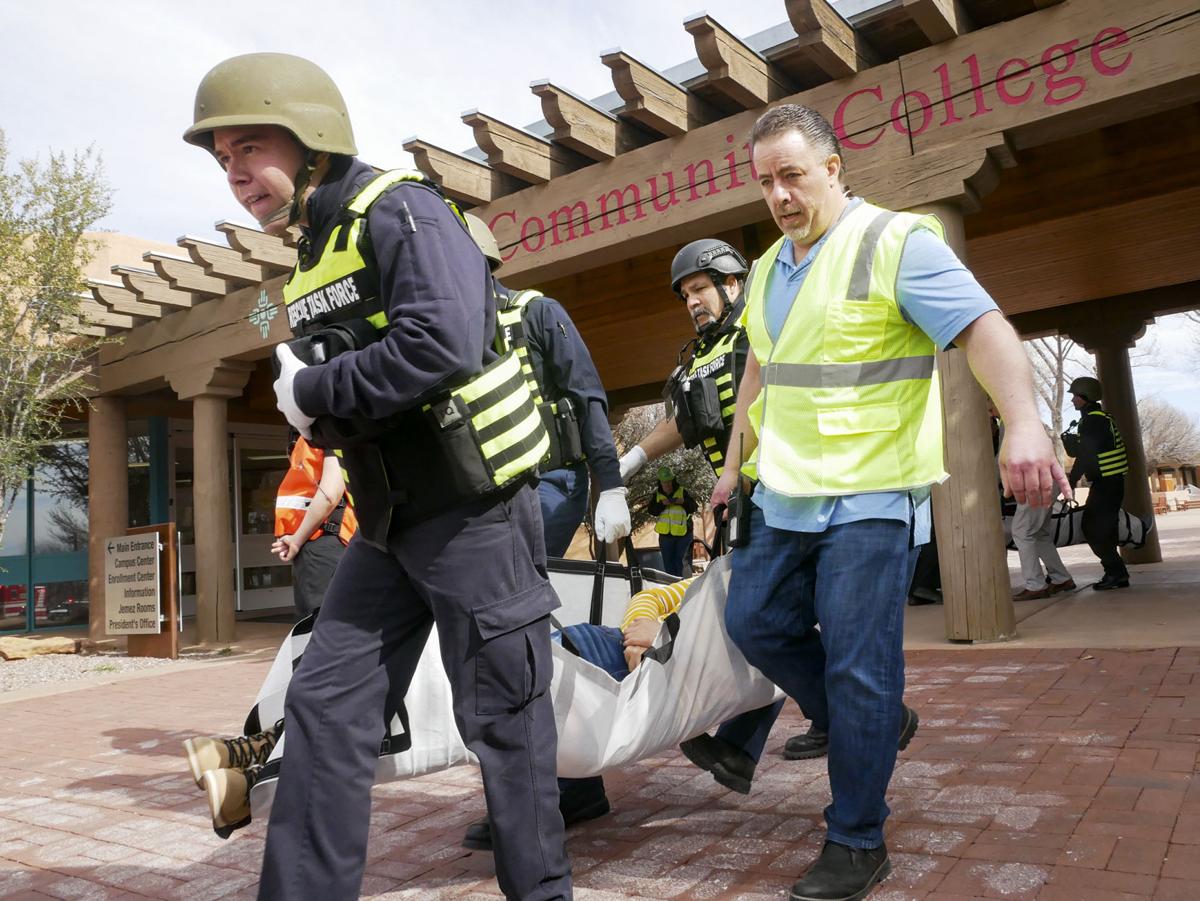 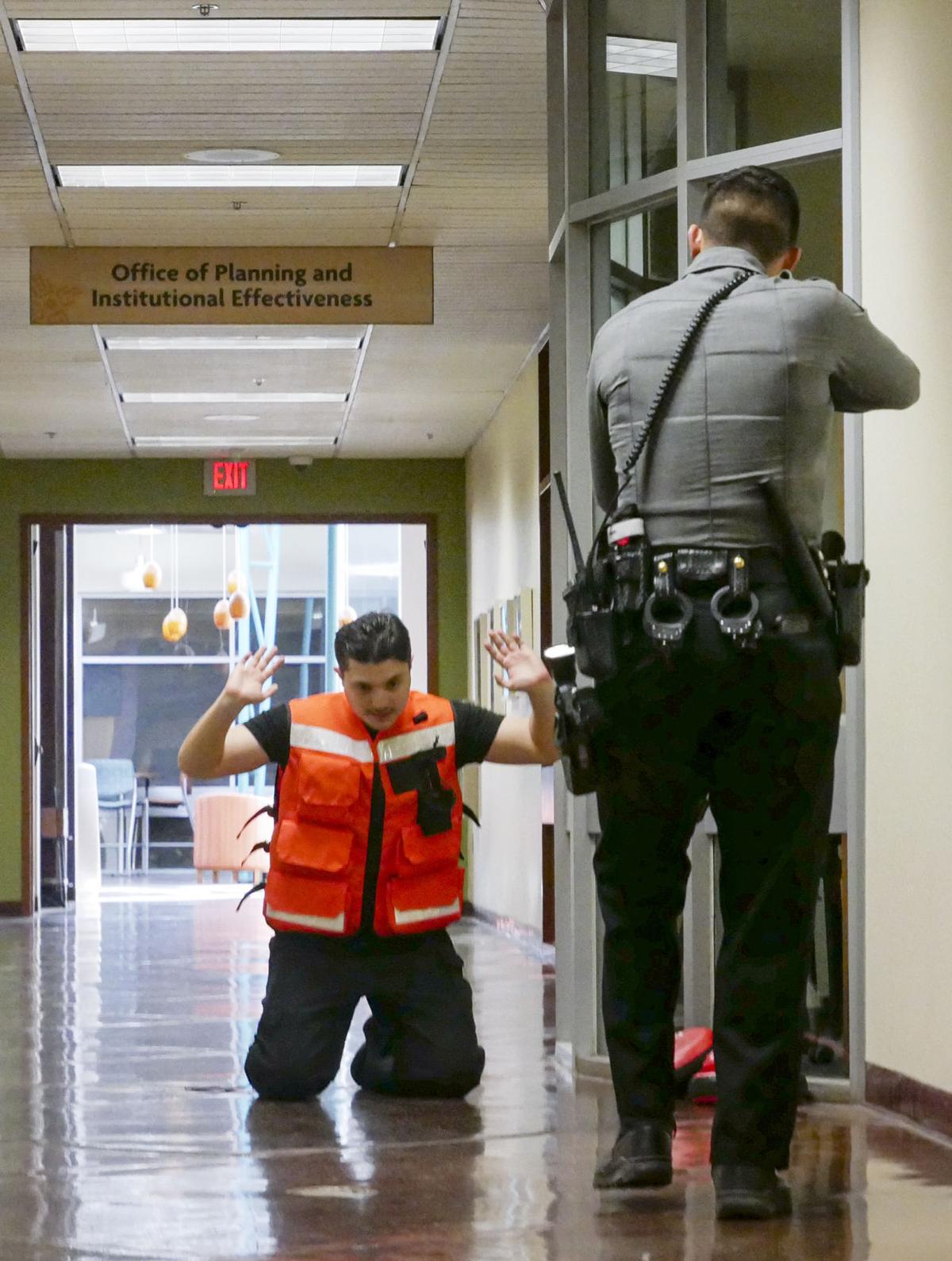 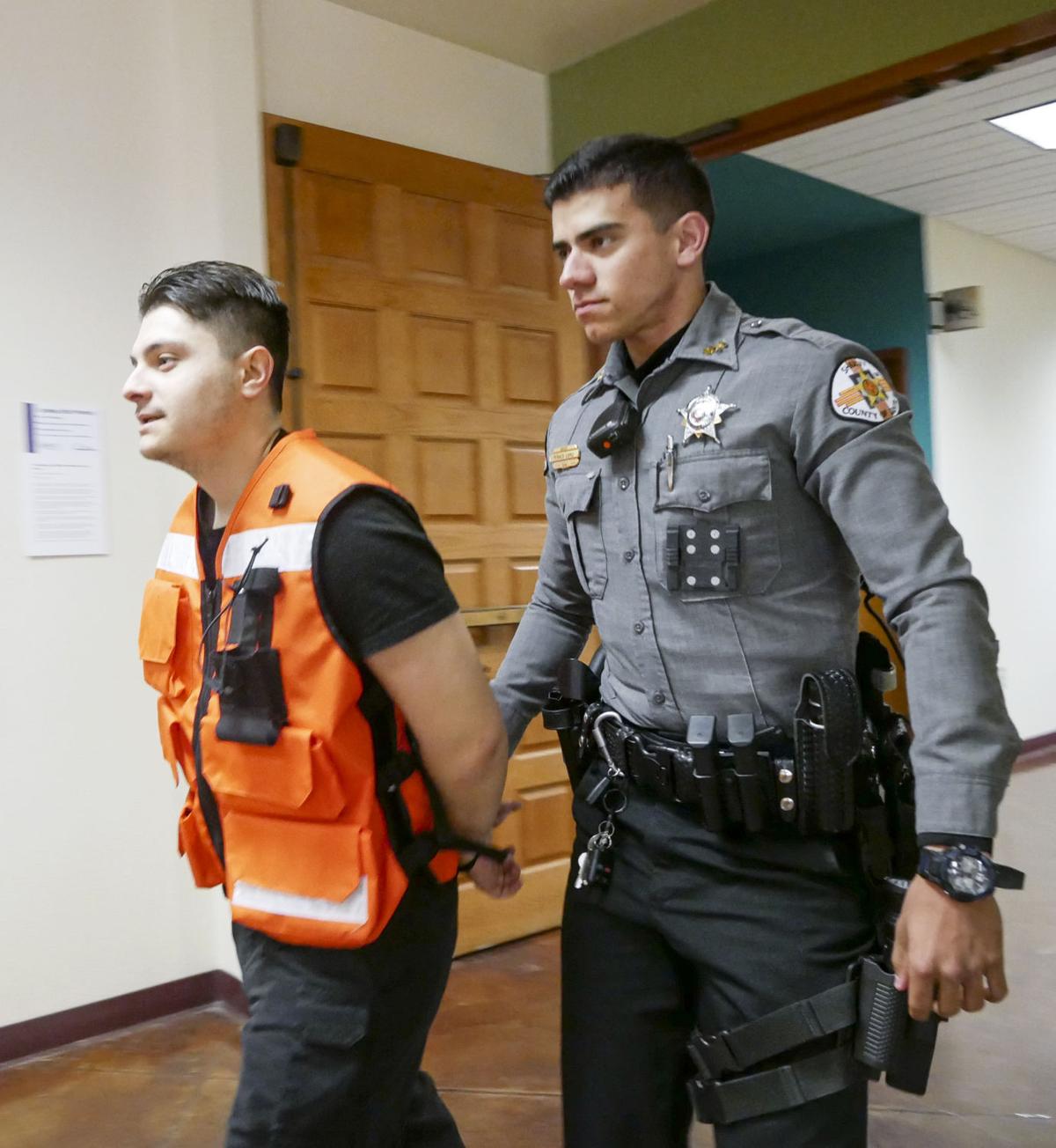 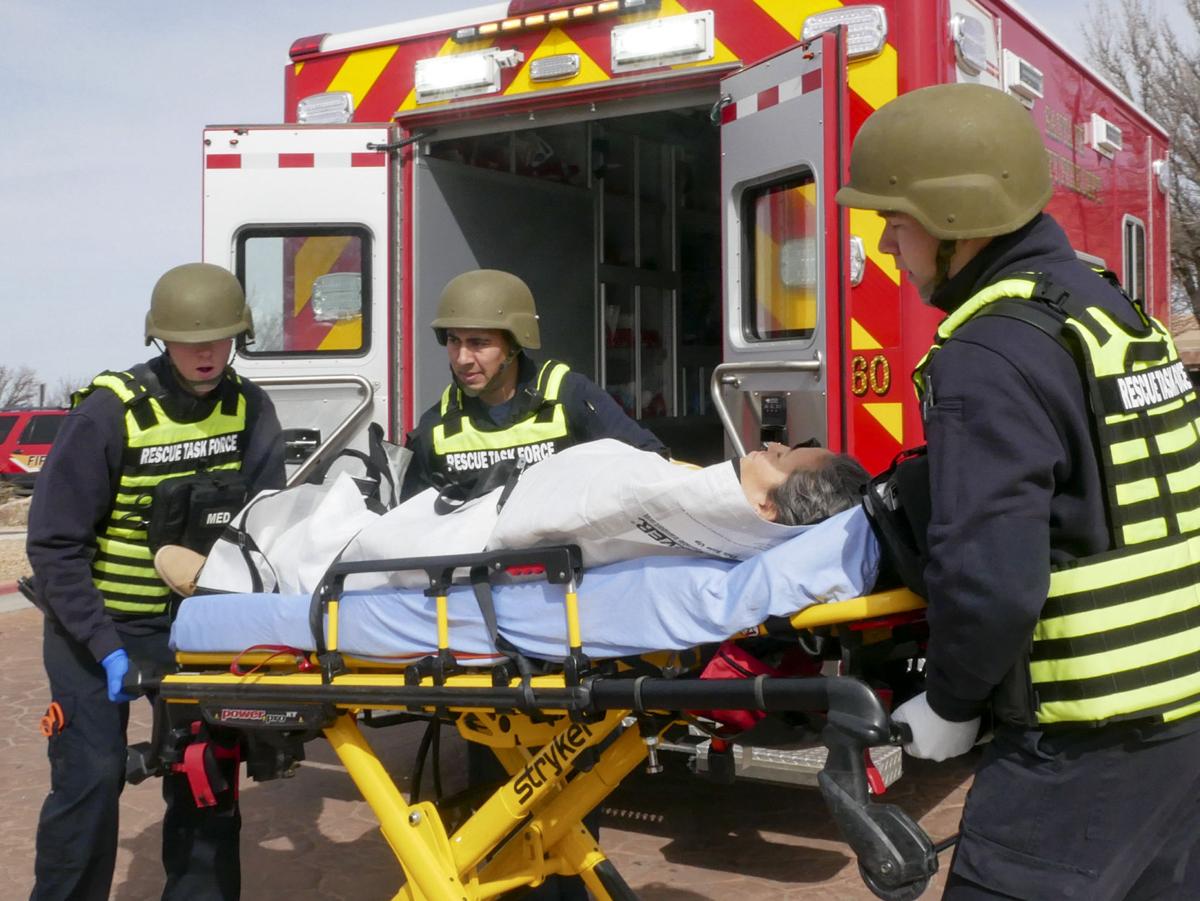 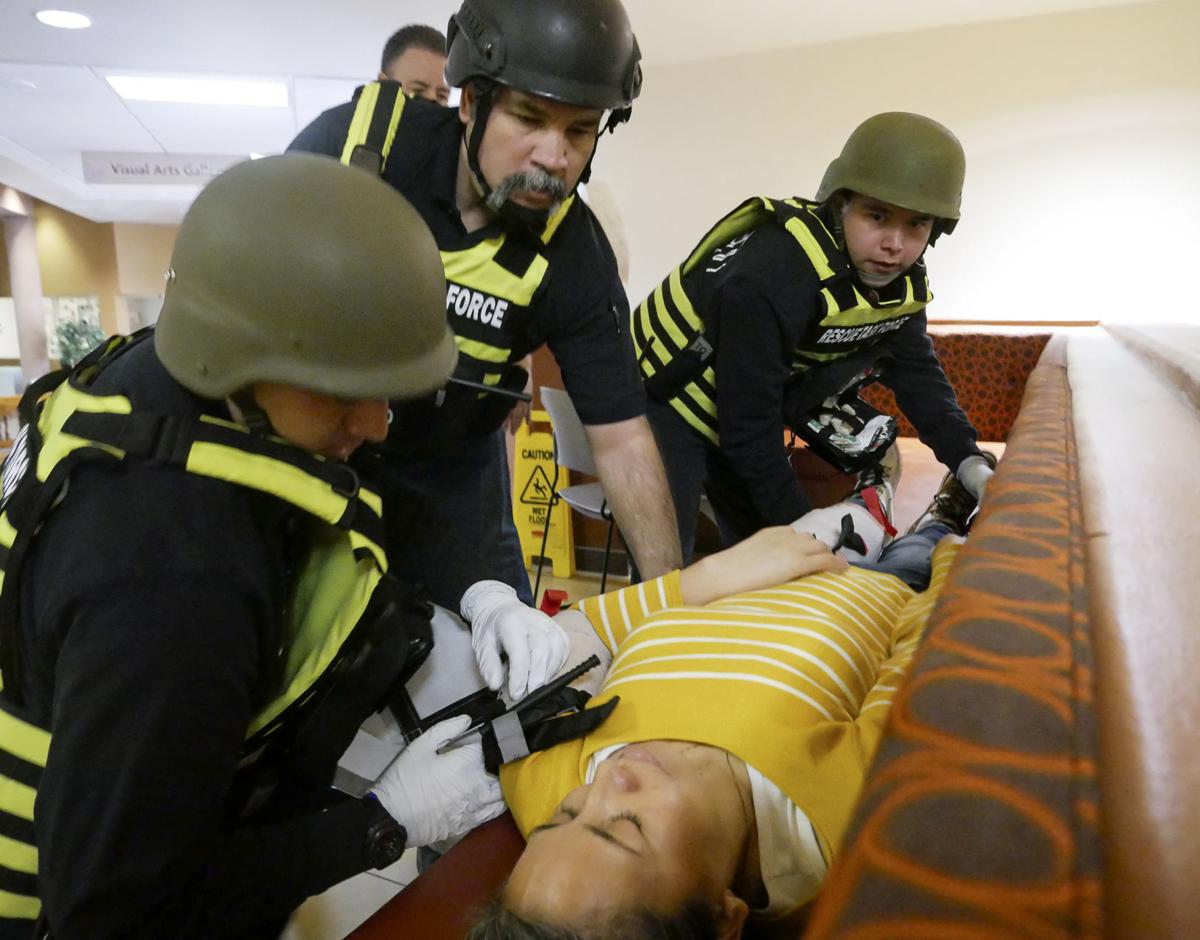 Maria Flores, portraying a victim during an active shooter drill Friday at Santa Fe Community College, is tended to by members of the Santa Fe Fire Department’s Rescue Task Force.

Maria Flores, portraying a victim during an active shooter drill Friday at Santa Fe Community College, is tended to by members of the Santa Fe Fire Department’s Rescue Task Force.

Outside a classroom at Santa Fe Community College, a sheriff’s deputy with his firearm drawn silenced a series of blasts that sounded like gunfire.

He had just passed a custodian who was crying out for help for wounded colleagues. But Santa Fe County Deputy Ronald Lopez had a mission: “Locate the shooter and neutralize the threat.”

The community college conducted an active-shooter training drill Friday morning to practice its emergency response to a threat on campus.

“It’s important to be prepared,” custodian Karina Tovar said in Spanish. She played the role of shooting victim who suffered bullet wounds to an arm and a leg.

“I carry the keys to all the rooms, so this is something I think about working in a school,” Tovar said.

Colleague Humberto Navarez agreed. “It’s important to learn not to panic,” he said.

The drill, a professional development exercise for faculty and staff, took place on a day without students on campus and involved a dozen sheriff’s deputies and other county emergency responders.

If follows a larger effort last year, when students were in class. That drill involved 40 first responders.

This year’s version was designed to emulate the first 10 minutes of a response to a 911 call about an active shooter. During the drill, Gallegos made his way past the KSFR radio station to the lobby of the college’s visual arts gallery, where he shot Tovar and fellow custodian Maria Flores.

As Navarez cried out for help, Deputy Lopez walked past with his gun drawn, following the sound of gunshots.

“That would be rough to see somebody spewing out blood in pain and have to just walk by, but that’s why you train,” said Lopez, who was carrying five tourniquets on his belt. “My main goal in that situation is to locate the shooter and neutralize the threat. After that, I could render aid.”

A handful of college employees joined first responders in providing emergency aid, carrying the two shooting victims to ambulances outside.

The drill lasted a little over 17 minutes.

A few hundred yards away from the action, 130 children ages 2 months to 4 years old at the college’s Kids Campus conducted a lockdown drill. Director Michelle Rosen-Hatcher said teachers learned from past drills to pass out worry stones and stuffed animals to the children.

“We’re practicing being safe. We frame it that way,” Rosen-Hatcher said. “The kids accept it. I guess that’s the world we’re living in. It’s like holding hands to cross the street or not being locked in a hot car — this is what we do to be safe.”

Santa Fe Community College President Becky Rowley said the drill was a valuable way to reveal improvements in the safety plan for a campus with numerous doors and access points.

“This reveals gaps in our plan,” she said. “This morning, we found out the PA system in a certain area wasn’t working. Those are the sort of things you find out.”

Rowley was working at her hometown Clovis Community College in August 2017 when a 16-year-old high school student killed two people and injured four more at a public library nearby.

“I don’t want to scare anybody, and this isn’t something that we need to practice every month,” she said. “But we have to do it often enough so that most of the people who work here have gone through it.”

Scruffy medians take a hit, but maybe your park will be nicer