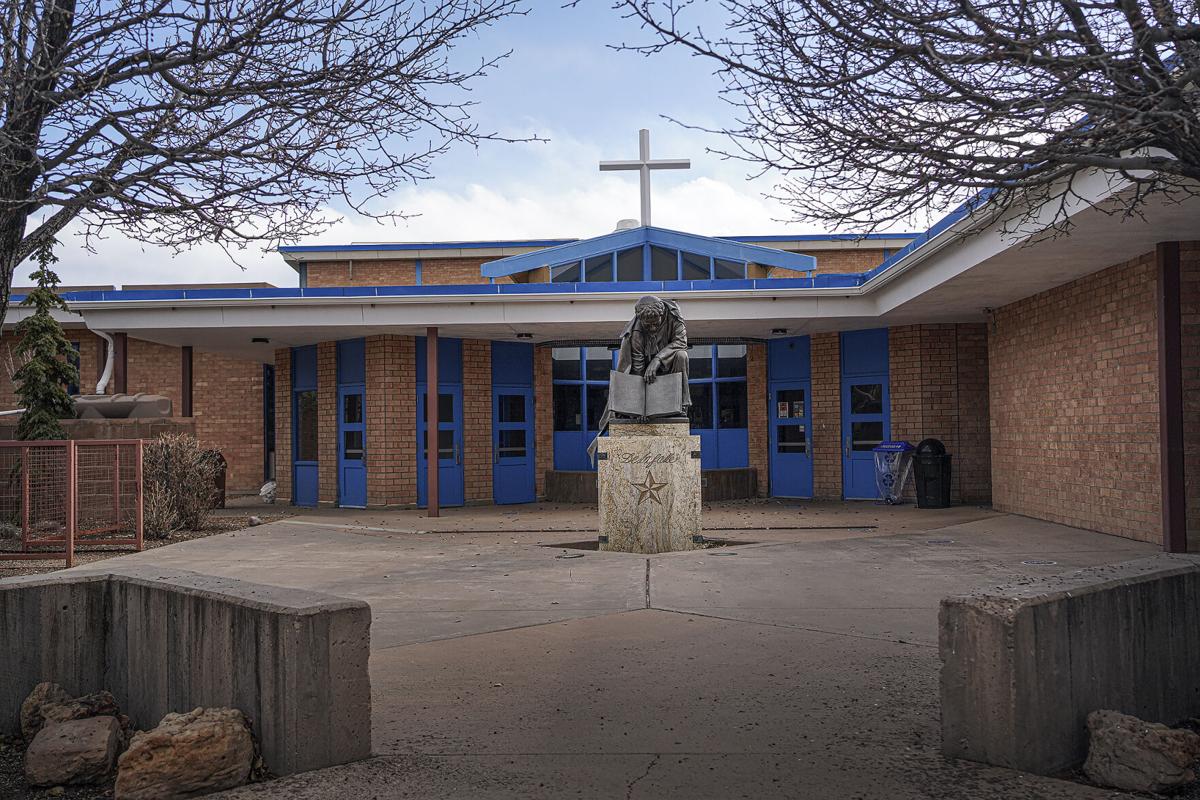 The entrance to St. Michael’s High School on Friday afternoon. The coronavirus pandemic has stymied traditional private schools’ fundraising efforts, so St. Michael’s has had to get creative to raise money, using virtual events such as online auctions. 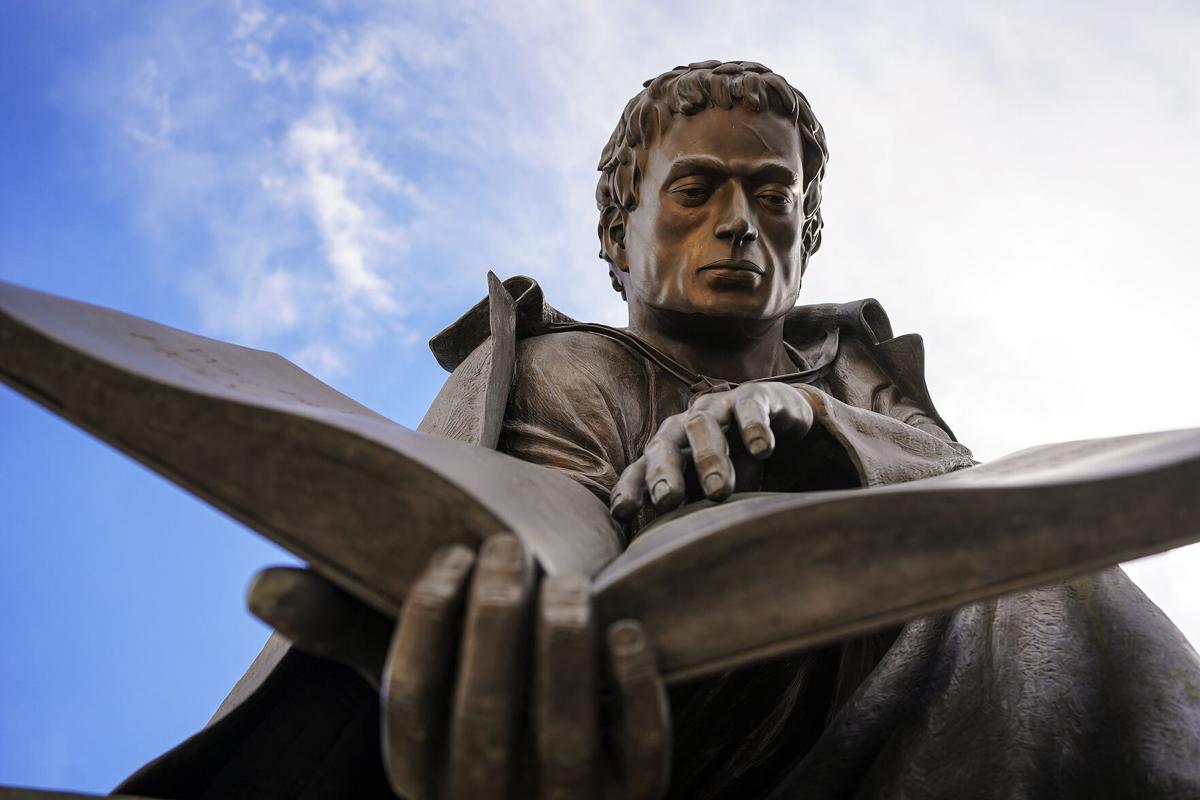 A view of the statue of St. John Baptist de La Salle at the entrance of St. Michael’s High School. 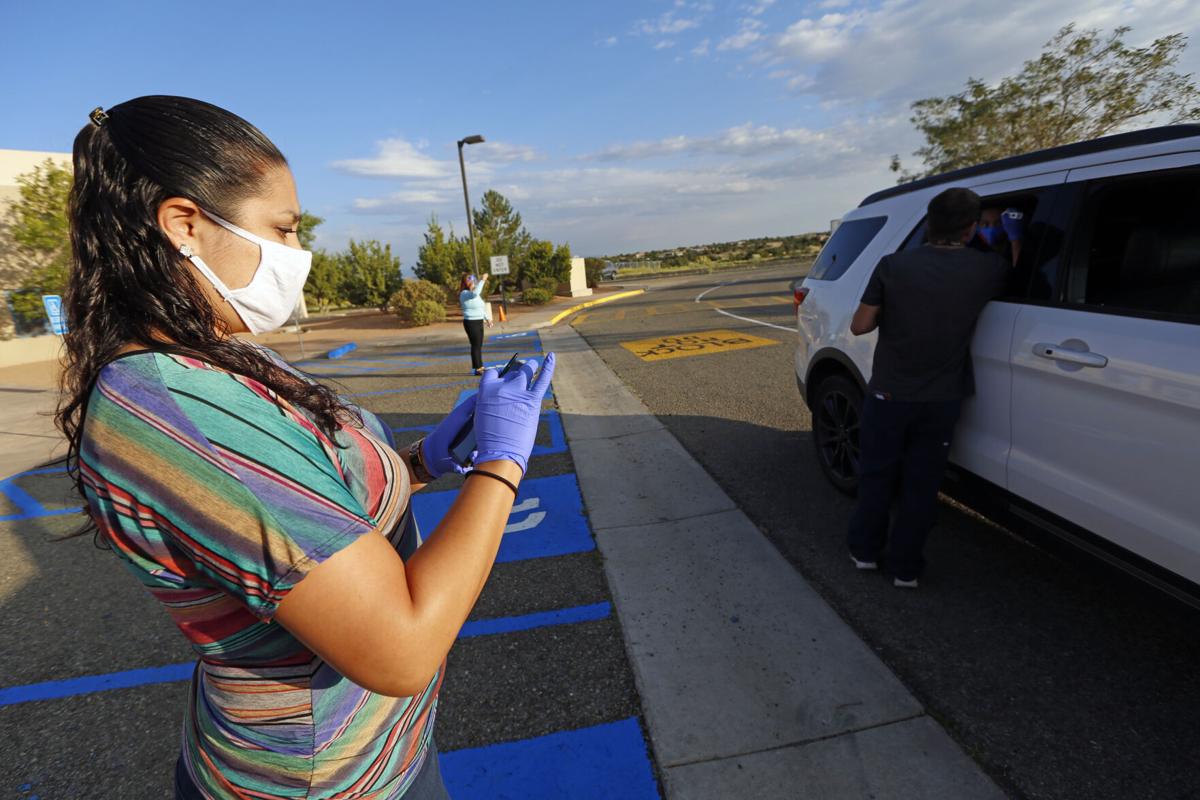 Santo Niño Regional Catholic School receptionist Christine Lopez records students’ temperatures as they arrive for class in early September. Santo Niño had in-person instruction until the Thanksgiving break but will shift to a remote model until January.

The entrance to St. Michael’s High School on Friday afternoon. The coronavirus pandemic has stymied traditional private schools’ fundraising efforts, so St. Michael’s has had to get creative to raise money, using virtual events such as online auctions.

A view of the statue of St. John Baptist de La Salle at the entrance of St. Michael’s High School.

Santo Niño Regional Catholic School receptionist Christine Lopez records students’ temperatures as they arrive for class in early September. Santo Niño had in-person instruction until the Thanksgiving break but will shift to a remote model until January.

It started with a leaky roof.

Normally, an unexpected expense for a private school can be offset with a hearty fundraising effort, but the COVID-19 pandemic has thrown a wrench into those plans.

St. Michael’s canceled its regular fundraising events, like the Horsemen Stampede party in the spring and the Horsemen Roundup auction in October, to adhere to the state’s public health order prohibiting large gatherings.

Those fundraisers have raised tens of thousands of dollars for the school, and they provided opportunities for alumni to develop personal relationships with their alma mater.

“The Roundup is a major fundraiser, which assists us in so many areas throughout the whole school, from tuition assistance [for students] to whatever else we need it for,” St. Michael’s Principal Sam Govea said.

Raising funds without such events during the pandemic has been a challenge.

St. Michael’s officials, like those at many local private schools, were forced to think outside the box. One of the results at St. Michael’s was a fundraising campaign interim President Leslie Romero-Kilmer set up for Giving Tuesday, which is Dec. 1. The school set a goal of $200,000 for Giving Tuesday, which has been held since 2012 as a global holiday fundraising effort to benefit nonprofits.

Santa Fe Preparatory School used its social media platforms and online meetings to solicit donations from alumni and opted to turn its Dancing with the Santa Fe Stars event in the spring into a virtual fundraiser.

Santa Fe Waldorf School canceled its holiday fair and Wolf Pack Trail Run because of COVID-19 restrictions and instead is focusing on an online holiday auction, in which potential donors can purchase art, jewelry, restaurant gift certificates and even stays at hotels.

St. Michael’s, Santa Fe Waldorf and Santo Niño Regional Catholic School applied for federal CARES Act funds in the summer to help with payroll and other costs. Officials at those schools also are considering applications for a portion of the $330 million in pandemic relief the state Legislature approved Tuesday.

“We’ve not explored that yet, but we’ll be looking at it next week,” said Santo Niño Principal Robin Chavez.

Finding new revenue streams became crucial for private schools as they were forced to adapt to the changing landscape the coronavirus created in March.

Aaron Schubach, head of school at Santa Fe Prep, said the school even bought tents to create outdoor classrooms so it could accommodate more students on campus under the state’s restrictions allowing private schools to operate at only 25 percent of capacity.

Santa Fe Prep hasn’t had the opportunity to use the tents because students have been learning remotely since the start of the year, he said.

Schubach hopes to break them in when the school opens its doors Jan. 16 to a hybrid learning model combining in-person and remote learning.

“I think every school, every institution has had to respond [to the coronavirus pandemic],” Schubach said. “Our teachers, our administrators, they have always been strong, and we’re real proud of them.”

As the pandemic affected families’ employment and income, the need for tuition assistance also has become more acute.

Govea estimated about 45 percent to 50 percent of St. Michael’s students get some form of financial aid to help cover a portion of the $10,100 tuition cost. He added that the Lasallian Region of North America, which runs the Catholic school, also has provided financial help for St. Michael’s and its families.

Santa Fe Prep allocated more than $1.5 million in aid this year, and one-third of families have used it. The average grant amount each student receives is $13,870, which covers more than half of the school’s nearly $24,000 tuition.

The rising number of private school families requesting financial aid has increased the need to ramp up new types of fundraising efforts.

“This is an opportunity to do something different,” Romero-Kilmer said of the pandemic. “Sometimes, we get stuck with how we do things. It’s like, ‘This is how we always do things.’ Well, whether it’s teaching students, fundraising or even going to the grocery store, we’re learning how to do things in a different way.”

Perhaps surprisingly, some area private schools don’t appear to be struggling with their enrollment. Some have even increased their student numbers this year.

Waldorf Administrator Gerson Pérez said his school, which has 171 students this year, had to turn away applicants to meet the state’s 25 percent occupancy guidelines for private schools. He has a waiting list for next year.

Before the pandemic hit, Pérez anticipated an enrollment of about 220 from prekindergarten through the 12th grade for 2020-21.

“This has been an opportunity to reach out to a new group or a niche of families,” Pérez said. “Certainly, I would seem to say that families who did not consider private education previously now do.”

Pérez said he has spoken with parents of children in public schools who are opening up to the idea of a private school education because of the opportunity for in-person instruction. While Santa Fe Prep and St. Michael’s have remained in remote learning throughout the semester, Waldorf had most of its students in the classroom four days a week until Nov. 16, when Pérez made a decision to go remote until mid-December.

Rio Grande School has provided classroom instruction for students from kindergarten through third grade, while grades 4-6 were in remote learning for the past two months.

Chavez said Santo Niño made it to the Thanksgiving break with in-person instruction but will shift to a remote model until January.

Even as interest grows in private education, schools are having to limit campus visits for families of prospective students. Some allow only virtual tours or set up in-person appointments for times when the campus is empty. Pérez said Waldorf’s admissions coordinator, Kate Pavuk, sometimes uses her tablet computer to walk families through the campus for their “virtual visit.”

“The whole experience for prospective parents has been different,” Pérez said. “But it also is true that families are looking more at independent or private schools that are making this effort to stay open and keep as many people on campus as possible.”

I really do not think NM private schools should have access to $330 million in pandemic relief the state Legislature approved Tuesday. Private schools have access to deep-pocket private donors, wealthy parents, etc. Public schools can only rely on generosity of tax payer. I mean there are thousands of NM public school kids today who do not even have basic internet access, unable to achieve a fair and equitable public education in this CV19 environment. Yet these private schools want pandemic relief monies? How selfish and inconsiderate. They should feel embarrassed for even asking.

Public school kids can get all the education they need (with or without internet access) if you can just get the teachers unions to reopen the schools.

When you can stay home with pay, why would you want to return to the class r00m.

Already the lowest education performance in the country, these kids will suffer the rest of their lives. That's just on the academic side. Loneliness, depression, as well as undetected child abuse also are there. The Teachers Union is irresponsible and selfish.

To say private schools should be excluded from Covid relief, and then call them selfish in the next sentence is about he least self aware thing I've read here in ages.

Private schools relieve the state of the burden of educating tens of thousands of NM children. Many of those students rely on grants and other financial aid to pay the tuition, because they don't have deep pockets, as you suggest. Thirty years ago, my Dad did plumbing for the St. Mike's brothers to barter for my tuition. I had classmates that cleaned up the school to help pay for their tuition. The school let them work in the summer to minimize any stigma. The tuition, BTW, is continues to be well below market due to the generosity of the school and others.

Well said Steve. But most private schools don't have and aren't run by the teachers unions. And that's what many have against them even though they provide a better education and a produce a better product (i.e., student).

If you mean a more elitist product (i.e. student), you may be right, lee.

Not sure how business savy your father was. Bartering valuable plumbing skills to send his son to SMHS? Free public education would have been equivalent. Glad I live in the real world.