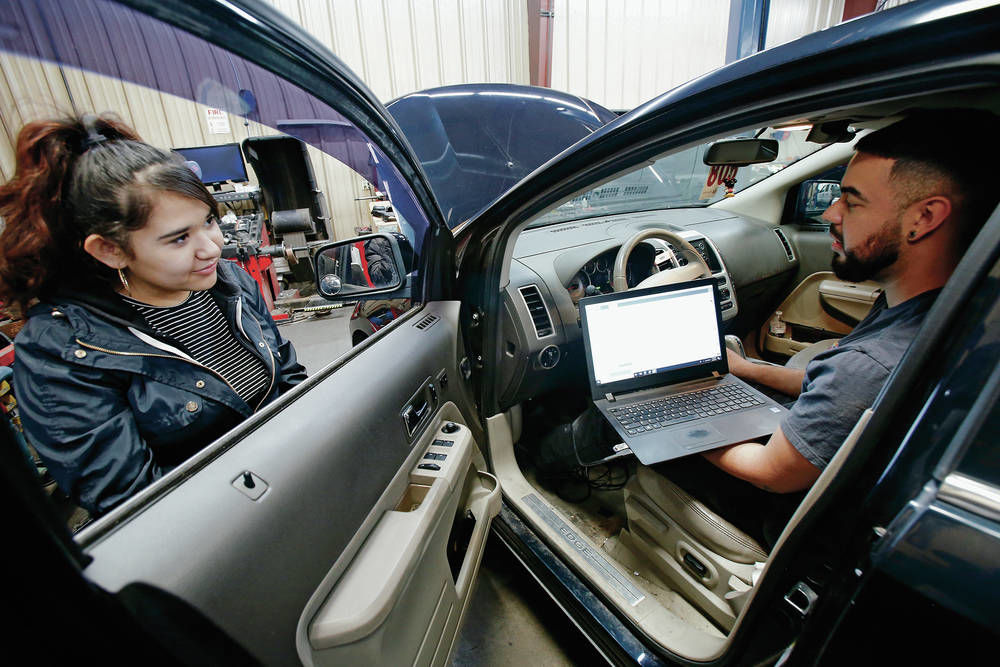 Nayeli Delgado, 16, watches as Santiago Larañaga, a service technician at Capitol Ford Lincoln, does an engine diagnostic on a customer’s car in December. Delgado was at Ford with some of her Early College Opportunities High School classmates during a career exploration day. Luis Sánchez Saturno/The New Mexican 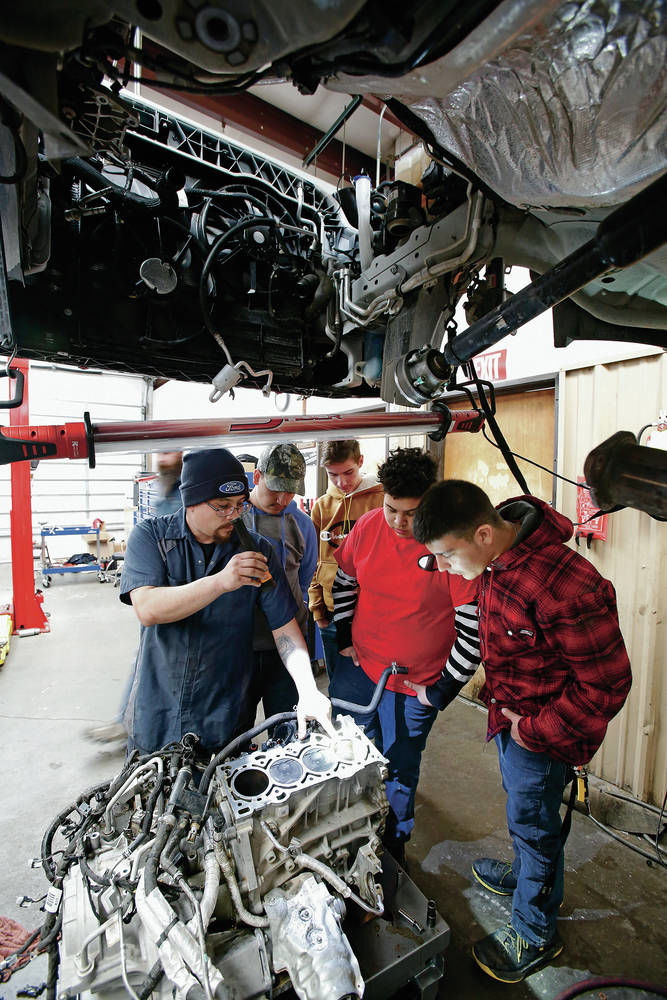 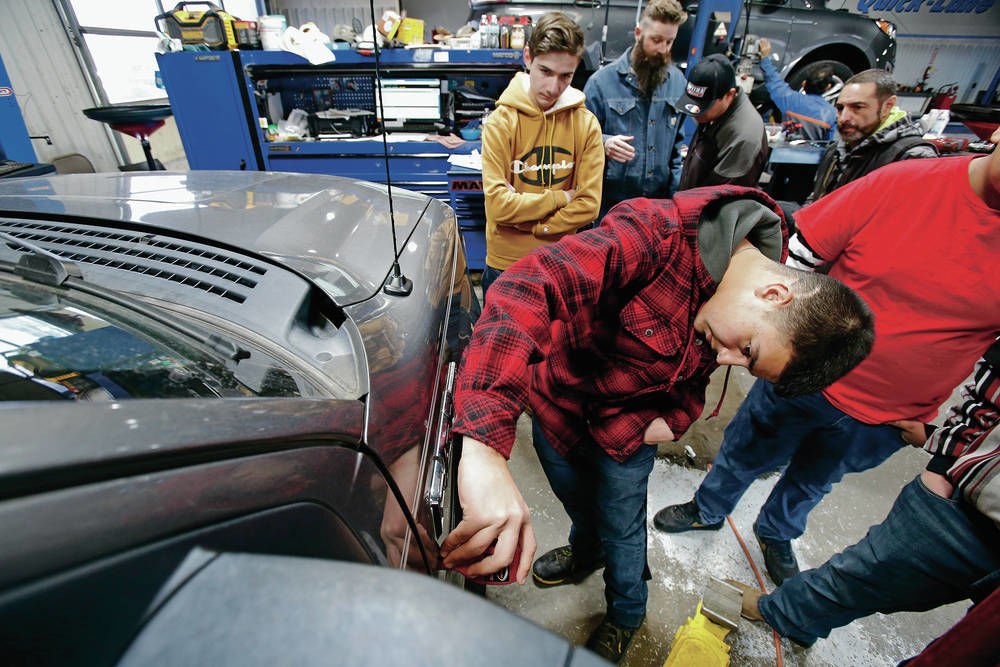 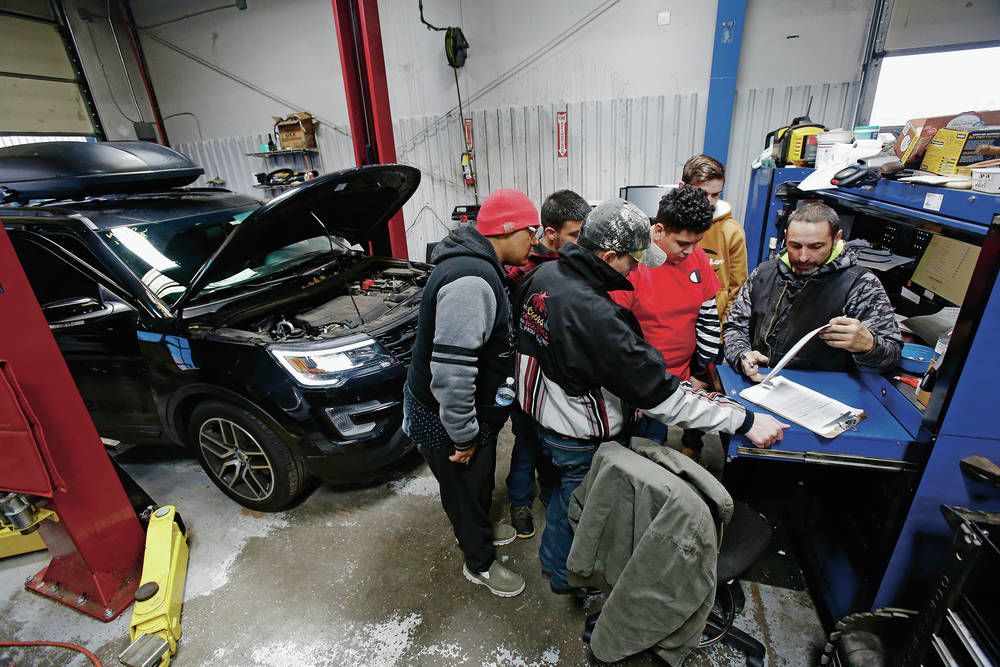 Nayeli Delgado, 16, watches as Santiago Larañaga, a service technician at Capitol Ford Lincoln, does an engine diagnostic on a customer’s car in December. Delgado was at Ford with some of her Early College Opportunities High School classmates during a career exploration day. Luis Sánchez Saturno/The New Mexican

Another Jeep is in Chris Coriz’s garage, waiting for repairs. This one looks worse than the one that came in last year. His students put a semester’s worth of improvements into that Wrangler, which brought $56,175 at auction.

“It was actually worth closer to $70K,” said Coriz, an automotive technology instructor at Santa Fe Public Schools’ Early College Opportunities High School. “We should have gotten a little more for it.”

But the project was about education, not profit.

In Coriz’s garage, students learn to finish a vehicle’s outside and tune its inside. In science class, they break down the physics of braking systems and the chemistry of paint. Social studies class covers the history of the automobile, and English class offers lessons in writing invoices and thank-you notes for customers.

The roughly 120 students at ECO take community college courses alongside core high school classes. They strive to earn associate degrees and vocational certificates — as well as employment in Northern New Mexico — while working toward a diploma.

But ECO, which opened in August 2016, received F’s in its first two years from the state Public Education Department, largely because of poor results on academic proficiency exams. Last spring, just 18 percent of students at the school passed the reading proficiency tests, and less than 5 percent scored proficient in math.

Leadership at the school also has been an issue. Principal Michael Hagele is the third person to serve in ECO’s top job. Founder Dana Richards left after the school’s first year, and the second principal, Will Wade, moved out of state after the 2017-18 school year.

As part of a package directed to the 86 public schools in New Mexico that performed in the bottom 5 percent, ECO received a $222,422 grant from the state in May. Veronica García, superintendent of Santa Fe Public Schools, said the money will go toward literacy and math programs.

“This school has grown in terms of its vision and where it is going,” García said. “… We’re in the middle of a ground-up revisioning of ECO that will graduate students with a wide range of credentials.”

Vocational education, still relevant, has been rebranded as “career technical education,” García said, adding that it “costs money and takes time for teachers to be able to plan and implement a curriculum” for a specialized school like ECO.

Instead of responding to students’ low scores in math and reading with increased test preparation, the school is working to strengthen its use of project-based learning — like refurbishing the Jeep — in an effort to help students learn the state’s Common Core Standards.

ECO is housed in facilities that used to be known as the South Campus of Santa Fe High School, where the district offered vocational programs in the past.

While the welding, auto mechanic and construction classes at ECO have been available in the school district for decades, access to internships at places like Ford dealerships and Los Alamos National Laboratory — and a chance to earn professional certificates — are newly available to high school students through the alternative program.

“The vo-tech program — the South Campus of Santa Fe High, whatever the name was — this has always been a school that gave kids opportunities beyond the traditional classroom,” Hagele said. “What we’re doing now is enhancing those opportunities by melding the early college model with the career technical education model.”

Hagele is an Iowa native and philosophy major who started working in the school district in 2000 as a substitute teacher. He has since served as dean of students at Santa Fe High and assistant principal at Capital High.

Since the start of the school year, Hagele has been gathering every teacher — from automobile collisions to social studies — for an hour after school three days a week to collaborate on how to balance hands-on assignments with basic reading and math lessons.

“What I like about this school is that it’s not just mechanics class and math class,” said Michael Osborn, a sophomore at ECO who plans to graduate with associate degrees in welding and auto mechanics, and maybe even culinary arts. “It’s mechanics and math and welding all combined.”

As an eighth-grader, he said, he thought the only reason to go to high school was so he could later move on to college.

“I came here. I shadowed for a day,” Osborn said, “and they taught me, ‘Listen, that’s not the only route, dude. You have an option to come here.’ “

An ECO student’s day is a mix of core classes in math, English, science and social studies, and technical classes such as welding, automotive mechanics, construction sciences, sustainability and architectural design.

Through a dual-credit partnership with Santa Fe Community College, ECO offers students five possible associate degrees and five certificate tracks to prepare them for employment. Starting in the 2019-20 school year, the school will provide afternoon transportation to the community college for dual-credit classes that can count toward high school graduation and an associate or bachelor’s degree.

Beyond diplomas, ECO has built pathways to employment with local industries.

Upon graduation and completion of a community college certificate program, ECO welding students have automatic acceptance into a 2½-year apprenticeship at LANL, which could result in a $35-per-hour job.

This semester, a handful of senior auto mechanics and collision students are working as paid interns at Capitol Ford, with the chance for a full-time job after graduation.

And construction science graduates have automatic entry into an apprenticeship with the New Mexico Building Trades Council.

“It’s about leveraging student interests to create motivation,” Gephart said. “This is what is new about our approach with ECO. Before it was vo-tech in isolation. The old vo-tech model was very focused on an individual skill — like working on a car, painting a car or welding. What we’re doing now is more about a head start on industry certifications and college degrees while providing the academic core ability of reading and math.”

The district hopes to expand ECO to around 300 students in coming years.

To make way for the enrollment increase, the district will use a $10 million bond approved in 2017 for campus improvements. The renovations, tentatively scheduled for completion by 2021, include a new administrative entrance designed by the school’s architecture students, a new building for core classes and upgrades to existing training facilities.

In its third year, ECO is starting to live out its name.

“With auto mechanics, I could go work at Ford out of high school and make $50K a year. Or I can go up to Los Alamos to weld for $70K a year,” Osborn said as he watched classmates replace brakes on an old Jeep.

“That’s what I like about this school,” he said. “It’s in the title. It’s opportunities.”