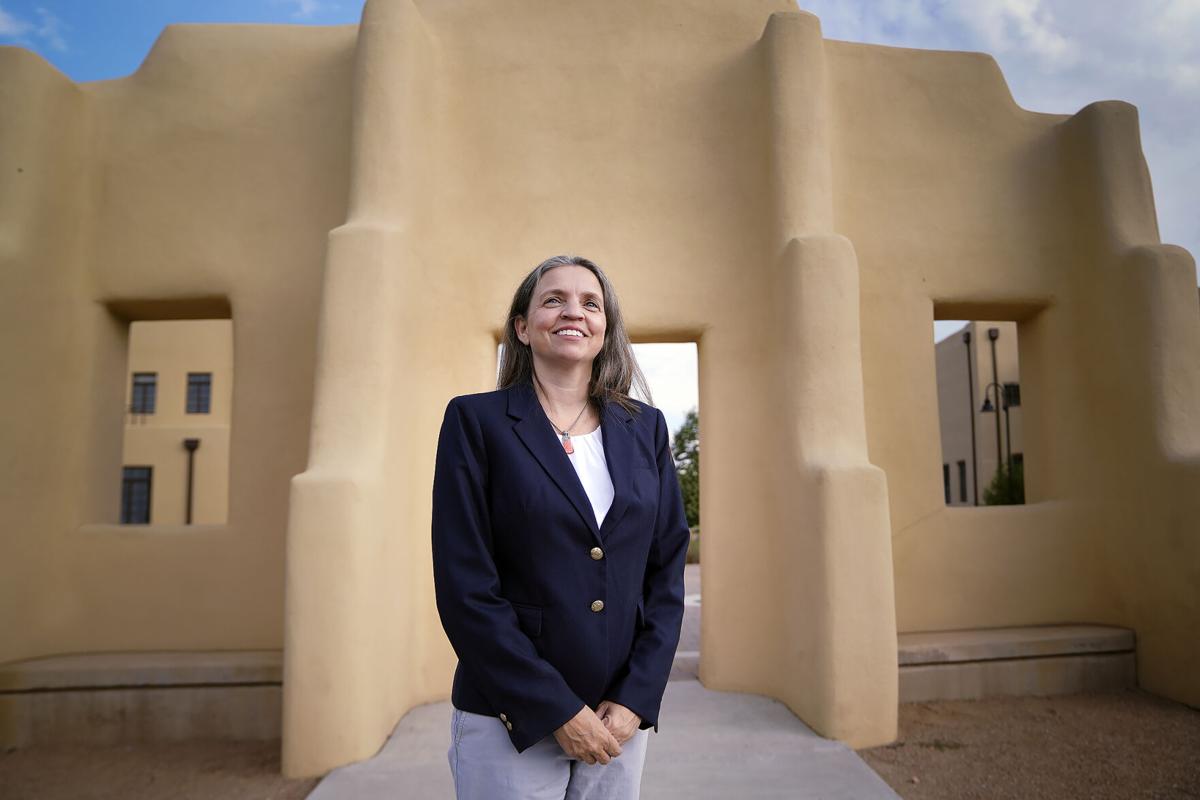 Jennifer Herbold, the new superintendent for the New Mexico School for the Deaf, at the school’s campus on Tuesday. Herbold is the first deaf woman to lead the historic school. 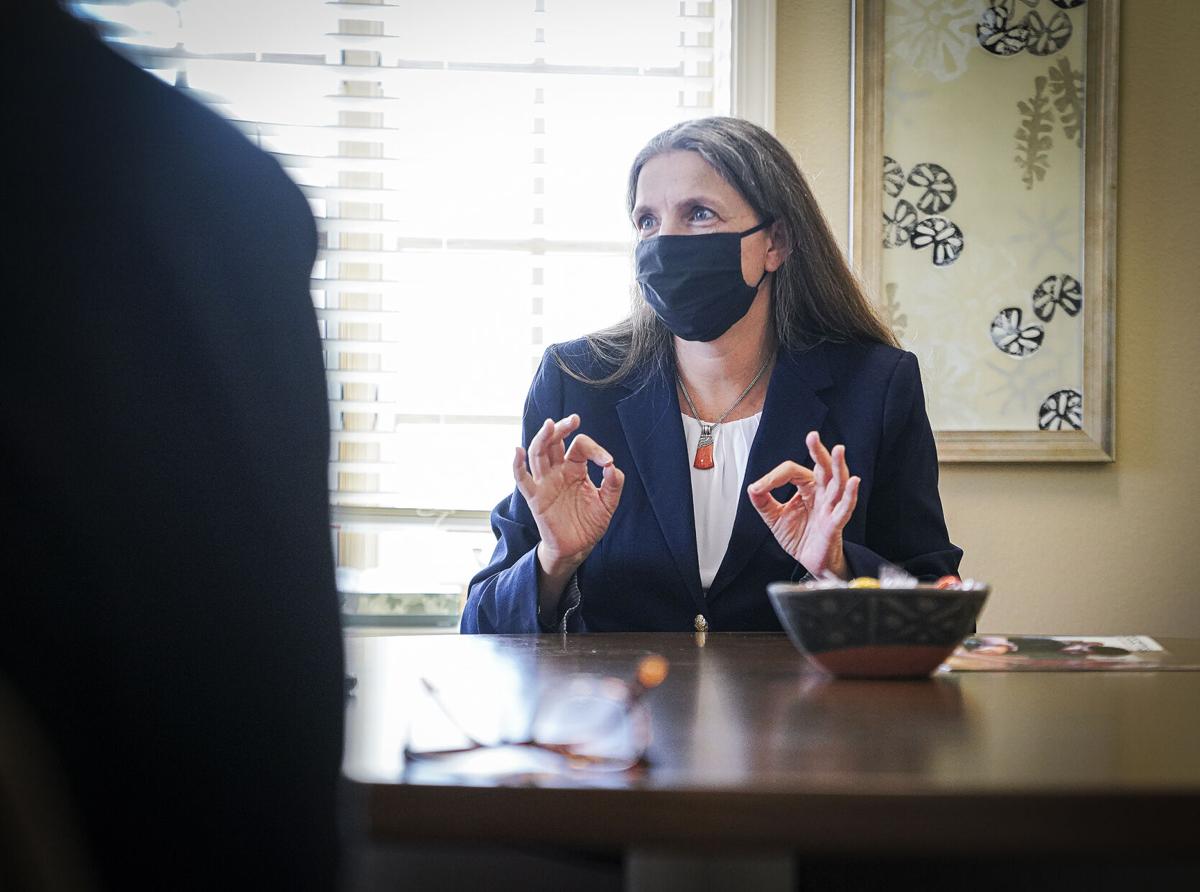 Herbold began at the New Mexico School for the Deaf in 1999 as a language arts teacher.

Jennifer Herbold, the new superintendent for the New Mexico School for the Deaf, at the school’s campus on Tuesday. Herbold is the first deaf woman to lead the historic school.

Herbold began at the New Mexico School for the Deaf in 1999 as a language arts teacher.

Jennifer Herbold likes to joke she’s been working at New Mexico School for the Deaf since the last century.

Still youthful at age 45, Herbold has a new role as superintendent of NMSD, the oldest public school in the state. But her ascent is about more than longevity.

Herbold is the first deaf woman to head the K-12 school in its 136 years.

She said she wants to be a good role model for young students, but her focus is on the present and her students as they navigate the coronavirus pandemic, a difficult period marked by online learning and shuttered dorm rooms.

“I’m not new in any way to the school, but there are still a lot of things that are new to me,” Herbold said in a recent interview on campus. “I’m going to be spending a lot of time learning the processes.”

Herbold, who grew up in Washington, D.C., entered her undergrad years with ambitions of becoming a lawyer. She acknowledges she first gravitated to teaching for the schedule that offered some free time in the summer. But it was a love of reading that helped seal the deal as her first education class was a success.

“Fortunately, it worked out for me,” she said of the leap.

She later earned a Ph.D. at the University of Arizona in language, literacy and culture.

Herbold — whose three children also are deaf, with the two youngest, ages 10 and 15, students at NMSD — said she wants to forge stronger relationships with districts across the state since the school provides services to hundreds of deaf students in other areas and also oversees three preschools around the state.

The school also leads an early intervention program for babies and kids who are deaf or hard of hearing. Studies show the sooner a child can make contact with some type of language, be it through signing or hearing implants, the more successful they’ll be.

In a given year, staff members drive around New Mexico enough to circle the Earth several times in order to conduct at-home visits for new parents and help other schools meet the needs of kids with individualized education plans.

“The school here on campus has a very strong role in the state, but also we have to support families who don’t want to send their children here and that’s OK,” she said.

A bill introduced by Reps. Rebecca Dow, R-Truth or Consequences, and Antonio “Moe” Maestas, D-Albuquerque, during the last legislative session called for a reevaluation of the funding formulas for the school, in an attempt to allocate more per-student funds to deaf children elsewhere.

The bill, tabled in February, called for shifting the responsibility of services in part to a new state coordinator position. It was met with great concern by New Mexico School for the Deaf administrators.

Herbold said the issue could be raised again next legislative session.

“There are varying perspectives on our funding from legislators, and some with a limited understanding of what we do,” she said. “We have so much support from legislators in general. But how people perceive us and how we’re funded, we can agree to disagree.”

Like other schools statewide, the School for the Deaf is still on the hunt for qualified teachers this year following months of learning rattled by the pandemic.

The main campus on Cerrillos Road still lacks a math and science teacher for the school’s 145 students. NMSD uses a bilingual model to teach students American Sign Language — which has its own linguistic properties — as well as English.

Herbold said administrators started hiring licensed local teachers who aren’t fluent in American Sign Language, with the expectation they’ll learn along the way in order to fill the gaps.

There are no deaf education programs in New Mexico’s higher education system, and Herbold said people pursuing programs elsewhere may have halted their studies to avoid virtual learning during the pandemic, so the hiring pool is smaller.

“We’re figuring it out for this year and making it work,” she said.

NMSD high school English teacher Laurie Anderson said she sees the new superintendent as someone with endless institutional knowledge and a sense of diplomacy. Last year, the two worked side-by-side for a semester.

“I feel like she’s a visionary; she has an idea and she puts it in place well. The ideas become a reality in a very successful way,” Anderson said. “I think she takes time to think. She will listen to you.”

The School for the Deaf spent most of last year online, and as the director of instruction, Herbold said she saw firsthand how the pandemic affected education.

Some students entered this school year ready to read, write and sign. Others missed out on the behavioral lessons of early in-person learning. Kids with multiple disabilities had a more difficult time with remote learning at the K-12 school.

The computer screen, Herbold said, turns the three-dimensional nature of sign language into a 2-D experience.

“A hearing child can watch a screen for a second and look away, but deaf children have to have their eyes on the screen all the time. It’s exhausting,” she said.

For kids who are hard of hearing and don’t attend the School for the Deaf, the last year could have been especially isolating for those raised in hearing households or rural areas, Herbold said.

There also are concerns about how the lack of in-person visitations could affect early interventions for the state’s youngest children who may be deaf or hard of hearing. Staff members who usually do home visits to families statewide are still doing much of that work virtually.

“I don’t want to be alarmist about it, but I think there are many students who need to catch up,” Herbold said. “Early language is so important. … If that is put off, there is an impact that can be long-lasting.”

The school’s residential program, which houses dozens of students from hours away to immerse themselves in deaf culture, shut down completely for most of last year. It is still operating at a limited capacity.

The School for the Deaf has a vaccine mandate for all staff, a unique move compared to other K-12 schools in the state.

The struggles the school faces as the pandemic grinds onward, while challenging, are not unlike some faced by others in the state. And Herbold said her new position — she succeeded Rosemary Gallegos, who retired earlier this year — has been an easy transition. There are no problems to fix, she said, other than a need to expand statewide services.

“I’m dedicated. I love this school. I believe in this school, and I think this school does amazing, outstanding work,” she said. “And I’ll do whatever I can, anything within my power to make sure this school sustains itself and keeps doing the wonderful work that we do.”

Congratulations Dr. Herbold! I hope you're able to protect the schools resources from Mr. Maestas and others.