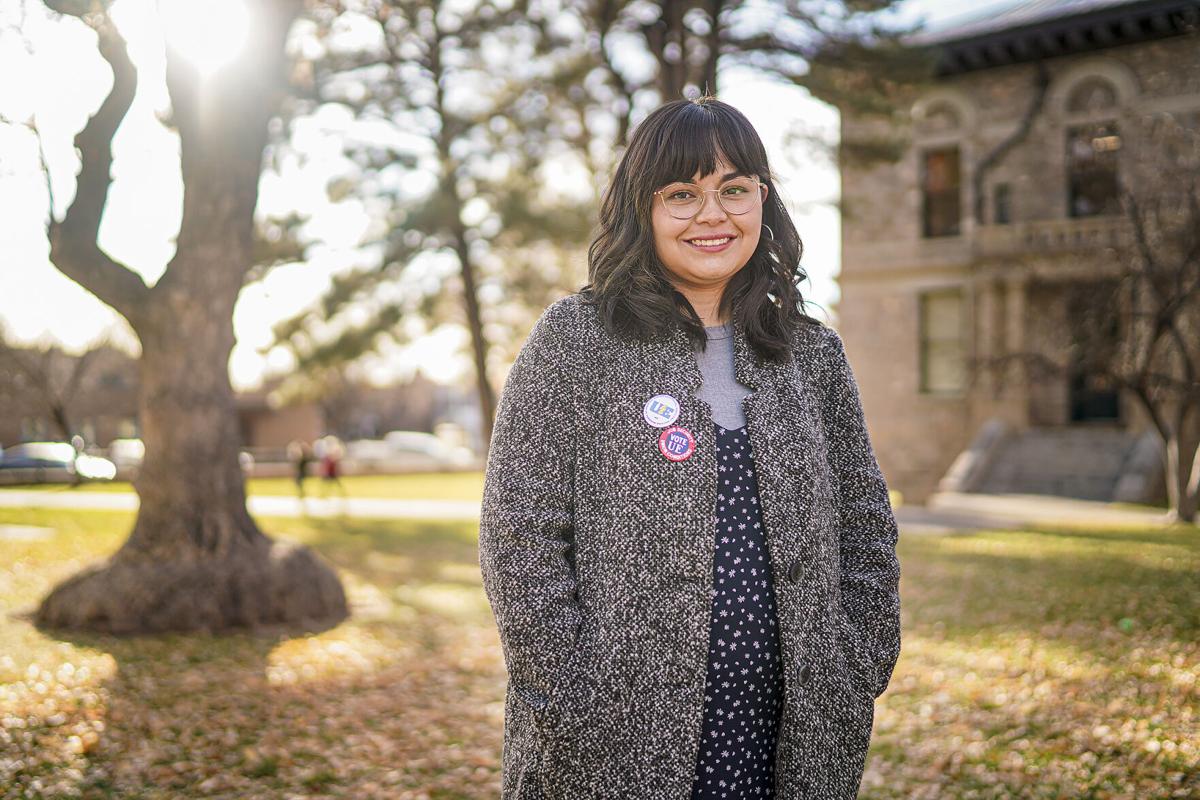 Alana Bock, fifth-year Ph.D. candidate at University of New Mexico, stands for a portrait Friday in Santa Fe. Bock currently works 30 hours a week teaching alongside her dissertation research on Filipino American history. She hopes to become a college professor after her dissertation. 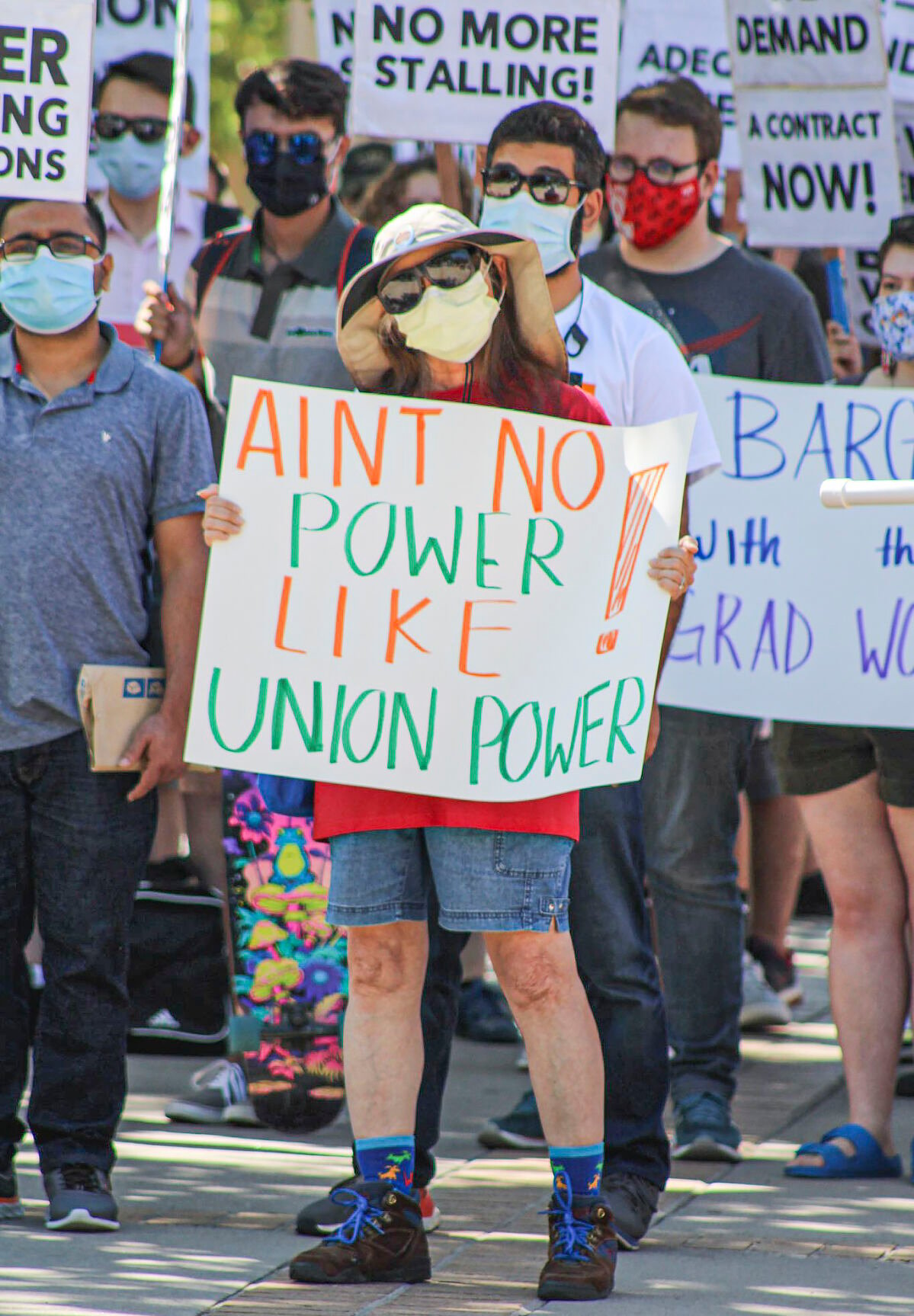 Alana Bock, fifth-year Ph.D. candidate at University of New Mexico, stands for a portrait Friday in Santa Fe. Bock currently works 30 hours a week teaching alongside her dissertation research on Filipino American history. She hopes to become a college professor after her dissertation.

University of New Mexico fifth-year Ph.D. candidate Alana Bock said that if her rent rises by $100, she’ll have to find new housing.

Brad Hanson said he works extra hours leading introductory classes at New Mexico State University, but he doesn’t get insurance coverage for it.

Both are graduate students who’ve taken on teaching jobs at the state’s two largest universities to help pay for their schooling. Both say it’s time graduate workers are recognized as public employees in New Mexico, with the right to bargain for better pay and health care benefits.

Both are working with United Electrical, Radio and Machine Workers of America to try and make it a reality — and are running into opposition from the universities.

In August, the Public Employee Labor Relations board ruled in favor of graduate workers at the University of New Mexico, saying they count as public employees eligible to unionize and reversing a June decision from a hearing officer.

Now, Bock and other members of United Graduate Workers of UNM say they await their recognition from the state.

They started unionization efforts in spring 2020 amid the start of the pandemic, after graduate workers fought to extend graduation deadlines while juggling both distance learning and distance teaching. They got little response from university officials, they said.

“We’re hoping to start bargaining by January,” Bock said in a recent interview. “We can’t go another year with these really horrible working conditions.”

The decision, which came after months of declining revenues and enrollment loss at the state’s colleges and universities, drew a mix of responses from the school’s Board of Regents in August.

“I wonder how the graduate students would feel if we were to declare that we’re going to double the salary but have half as many positions as now, because there is a limit on the resources we have and we have to figure out which pot it’s going to come from,” said Regent Rob Schwartz during a board meeting following the state’s ruling.

Bock said that when she began teaching classes as a graduate student worker, she was put in charge of her own class in the American studies department with “no formal training.”

“It was a lot of material I wasn’t familiar with. I had to teach myself … and create PowerPoints when I wasn’t being paid,” she said.

Bock said she made about $14,000 doing 20 hours of work a week over a 10-month contract, turning to student loans and family support to foot necessary expenses.

She added, “It definitely impacts undergrads when graduate students are already so overworked.”

Bock now teaches 30 hours a week as she researches Filipino American history for her dissertation. She hopes to become a college professor after finishing her degree.

She said she came to the university from California because the school’s American studies program “is really great.”

She and others lack dental and vision benefits — and more than half of graduate workers in a bargaining survey said they delayed medical care due to affordability concerns.

But Bock said that conditions are worse at New Mexico State University, where most graduate workers aren’t offered insurance benefits or tuition coverage for their work. Instead, they become eligible for the New Mexico Health Insurance Exchange and are given stipends.

Graduate assistant positions at New Mexico State University made up 22 percent of full-time-equivalent instructional staff, according to budget documents from the 2020-21 school year — and of the budget allocated to paying all educators, their pay totaled 12 percent.

“Even if NMSU provided tuition remission, we’re still below a liveable wage,” said Matt Varakian, a fourth-year Ph.D. candidate in the astronomy department at the southern New Mexico school, during a recently livestreamed forum on unionization efforts held at the schooling.

Kathy Key Tello, a first-year Master of Fine Arts candidate in the English department at New Mexico State University, said at the forum she makes roughly $18,400 this school year teaching a required English course alongside her research — but she predicts she’ll use more than $6,000 of those earnings to pay her own school.

The lack of insurance benefits for part-time faculty and graduate workers, along with “unlivable wages,” were listed in a no-confidence resolution recently passed by faculty senate against the administration. The student body government passed a similar resolution.

The faculty resolution argues administrators are failing to uphold the school’s mission by misspending funds on nontransparent administrative hires and circumventing faculty and student input on decisions.

Last month, the university launched a review into the claims. The results of an audit will be made public when complete, according to university officials.

Hanson, who is working toward a doctorate in geography, said graduate workers at the school had long attempted to advocate for themselves through task forces and meetings with administrators.

He said prior attempts at unionizing at the school were squashed by administrative delays and graduate student turnover.

In May, hundreds of graduate workers, Hanson included, signed union cards at the school.

Unlike the University of New Mexico, New Mexico State University has a local labor board for union decisions. The board did a “card check” and confirmed graduate student workers had adequate support for a bargaining unit but decided to delay further action until the state’s August ruling.

In October, the labor lawyer hired by the school, Dina Holcomb, maintained because the ruling is “interim,” anything could change — even as union advocates see it as a green light for all graduate workers in the state.

The University of New Mexico hired Holcomb in 2019, and she represented the school through the graduate union petition there.

According to financial documents provided by United Electrical, Radio and Machine Workers of America, the school paid $195 an hour for her services this year.

The statement was a source of ire for graduate workers and some faculty at the school.

The answer might wind up in the hands of the state’s labor board.

Shortly after that October meeting, the school’s local labor board saw two resignations — which could render it defunct, according to state rules.

A hearing Monday will determine if the union petition is transferred to the state board, where precedence from August’s decision could spell a favorable outcome for graduate workers.

I wish the grad students luck. Hope they are able to get an election to certify.

I do find it hilarious that Regent Rob Schwartz claims his pockets are empty when our state university system is happy to lavish six and seven figure salaries and bennies on coaches, not to mention on mountains of administrators and administrative assistants that add almost nothing to the value of a university. Meanwhile, grad students, especially in the social sciences and humanities, often carry a major chunk of the teaching workload while being paid peanuts and not offered any benefits. It should embarrass our regents.

Back when I was finishing up my Ph.D. at SUNY Stony Brook in the 1980's, the grad students in the arts, humanities, social sciences, and some in the sciences, tried to unionize. That was put down harshly by the administration, including the use of the campus cops when a tent city was set up to protest low grad stipends coupled with the high cost of housing on Long Island.

This situation has become normal as campuses increasingly load up teaching duties on grad students, adjunct faculty, and part timers. As Bruce Cockburn once sang, the trouble with normal is it always gets worse.

[thumbup]Right Khal, and most regents are pretty clueless about most important areas in the university I have found, since they are political appointees and usually unqualified to do the job. And the fact that tuition continues to rise out of proportion to CPI or any other inflation measure, and that administrative bloat and number of positions skyrocket is no accident.

This is an excellent idea. During my graduate school years, as a research and teaching assistant in 2 universities, I felt representation was lacking and abuses of our good intentions and ambitions were exploited.