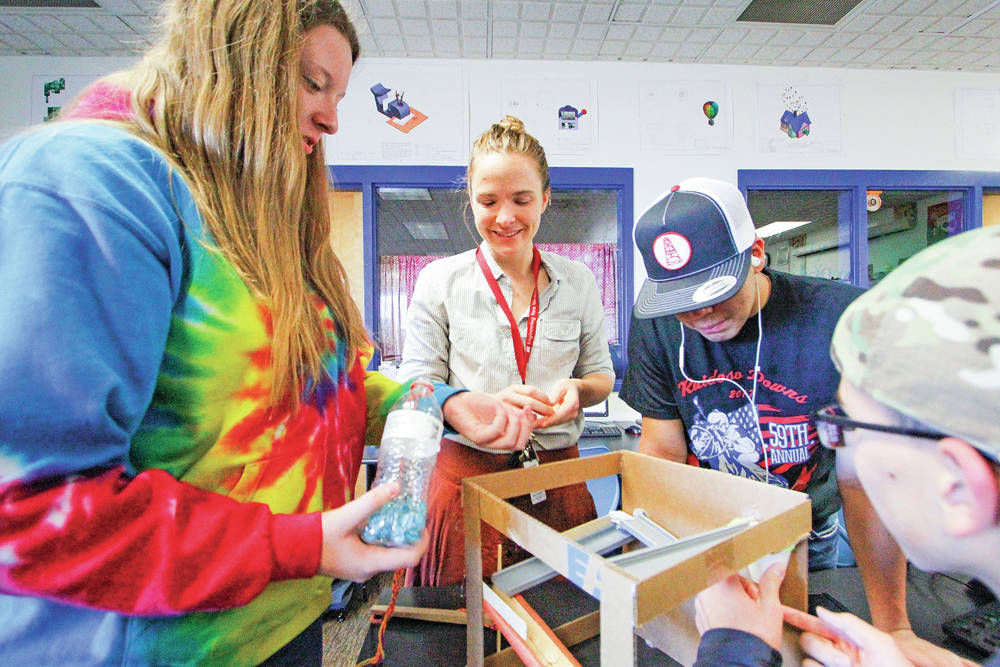 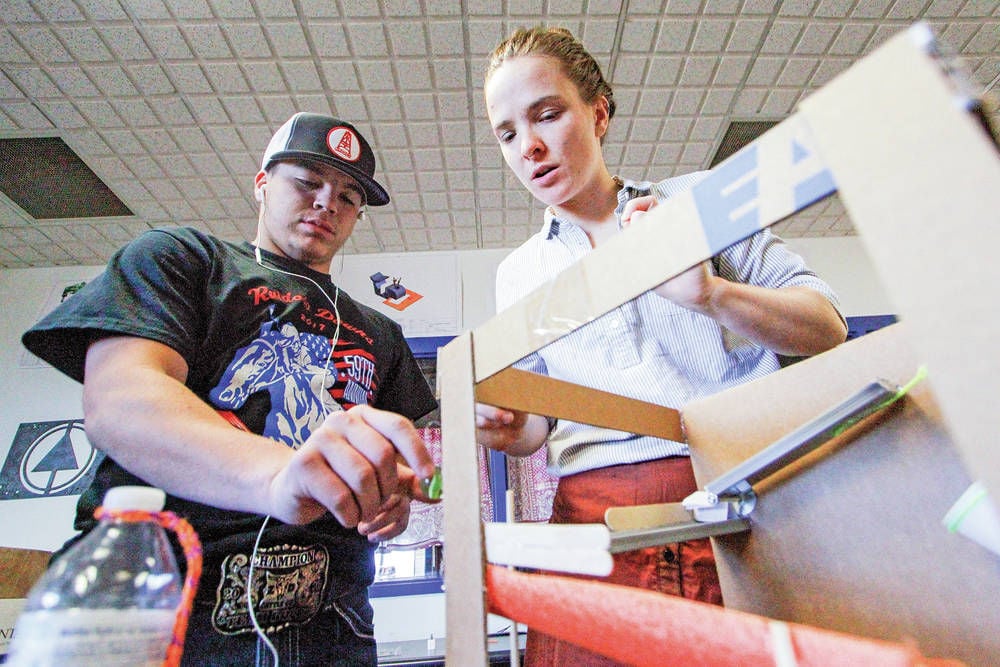 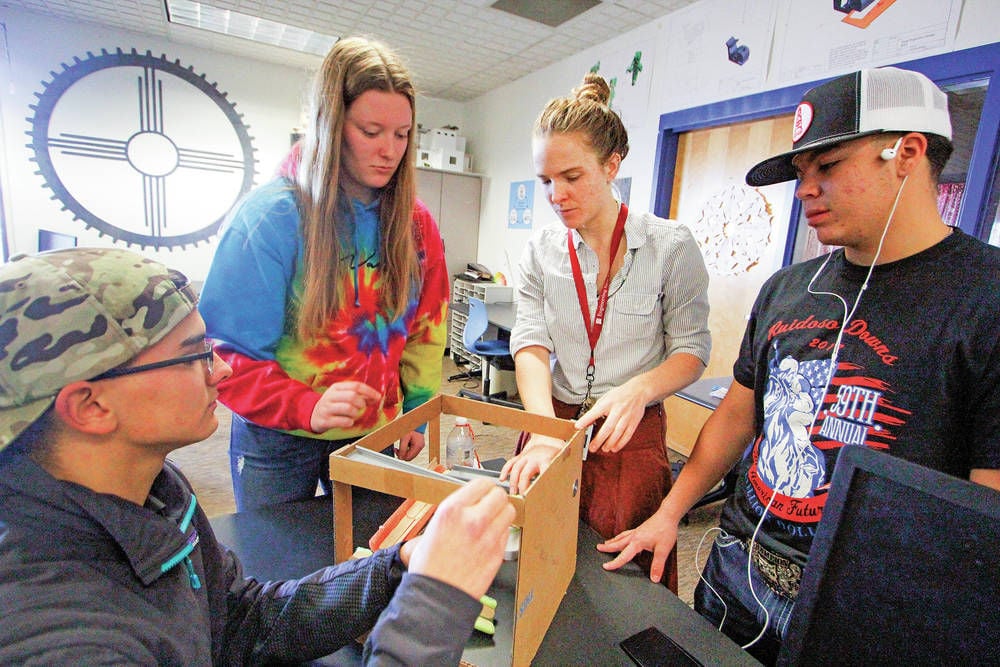 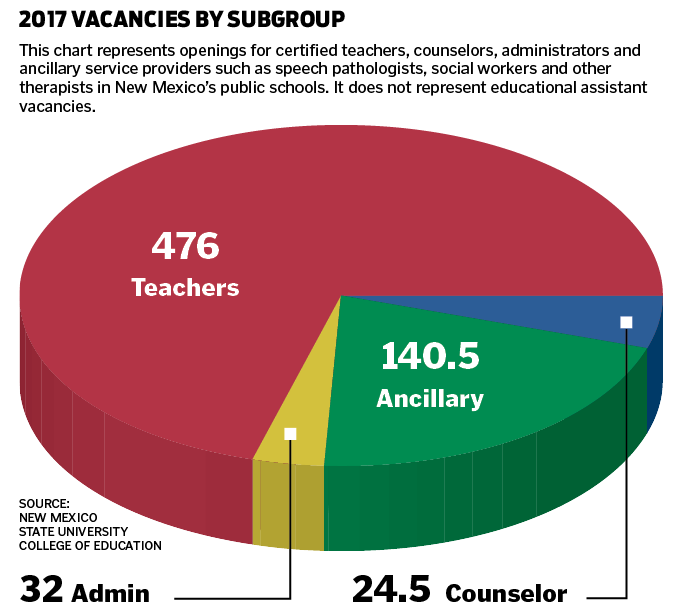 Christina Romero has nearly 25 years of experience as a public school teacher in Santa Fe. She can’t imagine any other way to live.

“If someone asked me, ‘Should I go into teaching?’ I’d say, “ ‘Go for it, do it,’ ” said Romero, who taught for 23 years at Gonzales Community School before taking a digital learning coach position last year at Nina Otero Community School.

“The best way to enjoy your life is to do something you are passionate about,” she said.

Thousands of New Mexico teachers would tell you the same thing. But some are troubled by the future of the profession. A new report, issued late last month by New Mexico State University’s College of Education, indicates the number of people in New Mexico with a passion for teaching is on the decline, with more than 800 public school jobs remaining vacant, a more than 60 percent increase compared to last year’s vacancies.

Just as troubling for a state that has struggled to move up from the bottom in national rankings of educational measures, says the report, is that the number of New Mexico college students choosing to enter teacher-training programs also is declining — dropping by nearly a third between 2010-11 and 2014-15, the most current figures available.

Romero sees the effects firsthand at Nina Otero, one of the schools in the Santa Fe district with teacher vacancies, and it saddens her.

“It’s hard on the kids,” she said. “They want someone in there who wants them to learn.”

According to NMSU’s College of Education, 475 teaching positions — a nearly even split between special-education and elementary teaching positions — are among the 830 vacant jobs in public schools in New Mexico, which means hundreds of long-term substitute teachers likely are heading up classrooms, teaching tens of thousands of children across the state.

While many substitutes are retired teachers or teacher-training grads hoping to gain some classroom experience, the requirements to obtain a substitute license in the state are minimal: A high school or GED diploma, completion of a substitute workshop and three hours of classroom observation are sufficient.

In a state with nearly 21,000 teachers, the number of vacancies represents just under 2.5 percent of the state’s teaching population. In Santa Fe Public Schools, there are 18 teacher vacancies, 11 of them in special-education classrooms.

The new report says that along with the teacher vacancies, New Mexico is down 158 educational assistants and 198 counselors and administrators.

“The trend does not seem to be changing,” said Karen Trujillo, director of the Alliance for the Advancement of Teaching and Learning at the NMSU College of Education.

And if that trend doesn’t change, she added, “what will happen is larger class sizes, distance education — where one teacher is teaching a math class at one school and other schools will have to pipe in digitally — and the quality of education will not be where it needs to be.”

Stephanie Ly, president of the American Federation of Teachers for New Mexico, said she is alarmed by the report’s statistics showing that most of teaching vacancies in the state are for educators who serve students with special needs or elementary students.

“The report is telling us that our youngest learners and special-education learners are at the greatest risk because they have the highest teacher vacancy rate and highest educational assistant vacancy rate,” Ly said. “And that is concerning.”

But the state Public Education Department says that despite the open positions in public schools, the number of teachers in the state is growing.

“One thing the report may not be taking into consideration,” she said, “is the fact that we also have more teachers coming to our schools and classrooms through nontraditional venues — attracting educators with diverse professional backgrounds.”

The College of Education study reports that 1,355 teachers working in the classrooms either have alternative teaching licenses or are long-term substitute educators.

The state has been working to recruit and retain educators in a variety of ways, including the creation of a program called the New Mexico Teacher-Leader Network — a 600-strong network of educators who share practices, voice concerns and champion other teachers, Alikhani said.

The state has offered stipends to help fill hard-to-staff positions in struggling schools and funds for classroom supplies to reduce the amount of money educators spend out of their own pockets.

Earlier this week, the National Council on Teacher Quality, a Washington, D.C.-based research and policy organization, gave New Mexico a B for its success in hiring teachers from outside the state.

Who wants to be a teacher?

The NMSU report cites a recent survey that its College of Education conducted, asking teachers if they would recommend a career in education.

To NMSU’s Trujillo, that is the most troubling sign.

Parents, community members and business leaders need to encourage willing students to enter the teaching field, she said, even if they just see it as a stepping stone to a better profession. She believes the state as a whole should look at the issue as an economic development tool.

“If we look at some of our communities, particularly our small, rural communities, your highest-paid people may be the teachers,” Trujillo said.

Good teachers, she said, help create a good workforce, which in turn attracts businesses to the state.

But Betty Patterson, president of the National Education Association union of New Mexico, said that may not be such an easy path to take. One problem deterring students from pursuing an education career is that they want to see the financial impact of their college investment to pay off down the line.

“They want to get out of teaching even if they went into teaching because they have to pay back the student loans, and salaries don’t encourage that,” Patterson said.

Though the NMSU report did not emphasize salary as a factor in vacancies, teacher pay is an issue with which the state has struggled.

The National Council on Teacher Quality recently gave New Mexico a C for teacher compensation. And the state’s Legislative Education Study Committee issued a report in 2016 that ranked New Mexico 43rd in the nation for teacher pay, with an average salary of $47,163 — a figure that makes it hard for the state to attract and retain talent, the report said.

Patterson recalled a recent conversation with a veteran teacher who is acting as a mentor to a younger colleague. The more experienced teacher told her: “ ‘I am earning $35,000 a year and the new teacher I am mentoring started at $34,000.’ ”

“That’s got to change,” Patterson said, adding the state should invest more money in middle-tier teachers so they will stay in the profession.

Romero, the Nina Ortiz digital learning coach, said that for her and many other teachers, “it’s not about the paycheck.” It’s about a love for working with children, she said, and knowing you can make a difference in their lives.

But, she added, “If I had to retire on a teacher’s salary, I’d have to get another job.”

The NMSU report includes a number of policy recommendations, including the need to create a comprehensive report of the supply and demand of education careers through 2030. Trujillo said most school districts do not conduct exit interviews, for example, to find out why teachers are leaving the profession.

“I’d rather think from the positive standpoint of finding a solution,” Trujillo said.

Otherwise, she contends, the education system in New Mexico could fail.

“And I don’t think that’s an option,” she said.