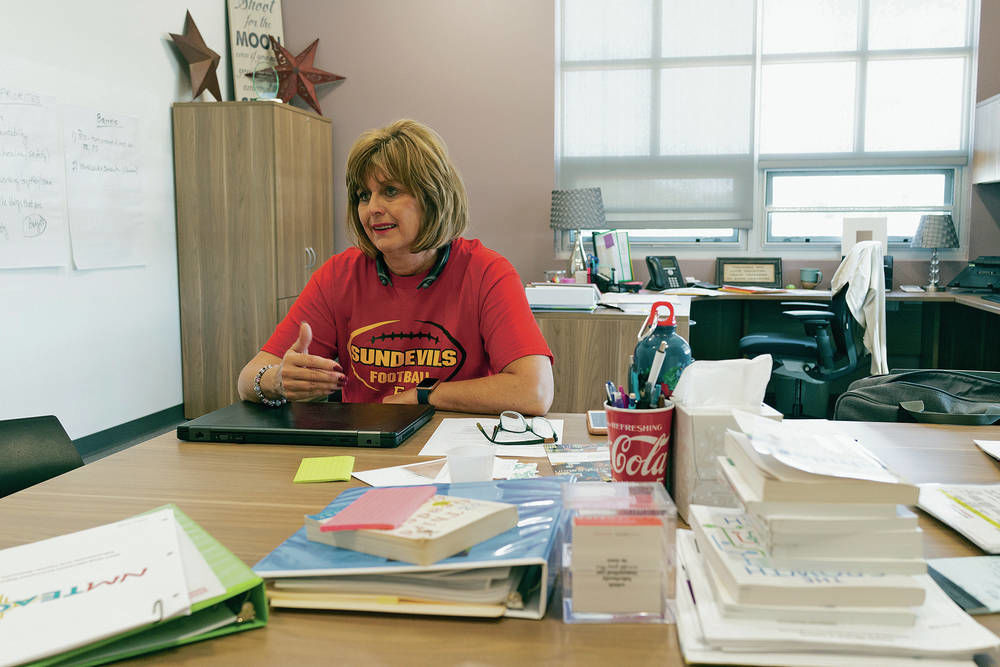 ‘The system that was designed to create equity with funding for facilities has not created equity,’ said Bobbie Gutierrez, superintendent of Española Public Schools. ‘They made a good attempt, but poor communities are still poor communities.’ Searchlight New Mexico 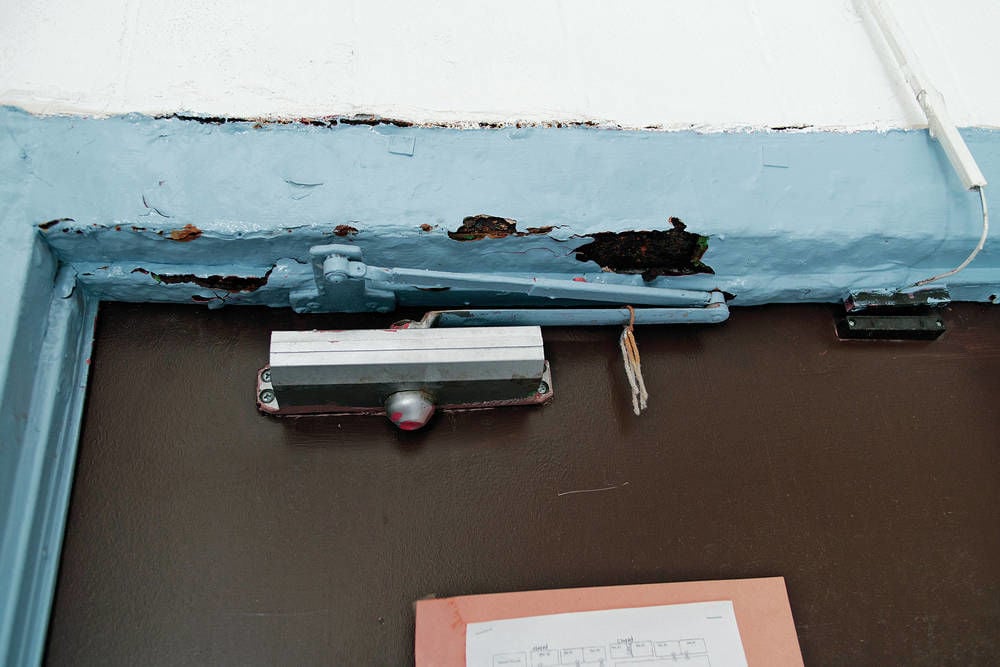 Paint is cracked around a door at Hernandez Elementary School in Hernandez. Some school maintenance issues around the state are cosmetic, but others pose a safety risk. Searchlight New Mexico

‘The system that was designed to create equity with funding for facilities has not created equity,’ said Bobbie Gutierrez, superintendent of Española Public Schools. ‘They made a good attempt, but poor communities are still poor communities.’ Searchlight New Mexico

Paint is cracked around a door at Hernandez Elementary School in Hernandez. Some school maintenance issues around the state are cosmetic, but others pose a safety risk. Searchlight New Mexico

Problems with school “systems” — which include everything from broken furnaces to mildewed carpets and shredded electrical wires — are rampant, according to a Searchlight New Mexico analysis of data collected by the state agency charged with awarding money to help keep public schools running.

Searchlight reviewed records of 18,000 separate systems in 700 schools and found:

• Four out of 5 have reached or surpassed their recommended lifespan.

• Twenty-two percent are on the edge of system failure.

• Nearly 150 schools are operating despite systems that have been judged to pose a risk to life, safety or health.

In March 2018, inspectors with the state’s Public School Facilities Authority found six sets of exterior doors at Newcomb High School in San Juan County that were hard to open, posing a safety hazard in the event of a fire or other emergency.

In January, inspectors from the Public School Facilities Authority came to Española Valley High School’s gym and found electrical panels with tape over breakers and a sign that read “Do not touch. Ever.”

Researchers have found that poorly ventilated classrooms increase the chance of illness and lead to lower attendance rates for students and teachers. Poorly maintained school facilities are associated with truancy and suspensions, while decent lighting and acoustics have been widely linked to healthy attention spans and better memory.

Searchlight New Mexico sought comment for this story from superintendents of 15 school districts, as well as the Public School Finance Authority, the agency charged with helping districts assess and maintain their facilities. Only two districts responded, despite multiple phone messages and emails.

The state has a mechanism to award capital funding to schools. But it historically has prioritized buildings over systems, and school districts are required to clear a range of hurdles to win money. The effect, according to people interviewed for this article, is that schools typically have struggled to pay for the maintenance they need.

“The system that was designed to create equity with funding for facilities has not created equity,” said Bobbie Gutierrez, superintendent of Española Public Schools. “They made a good attempt, but poor communities are still poor communities.”

Gutierrez decries the problems of the high school in her district — with its dilapidated electrical panels, broken lights, decrepit floor tiles and toilets that don’t flush.

“I look at a facility like Cleveland [High School in Rio Rancho] — a beautiful facility, one of the highest-performing schools in the state — then I look at Española Valley High School,” she said. “I want for my kids here in Española what my granddaughter had at Cleveland High School. I think my kids deserve that, and we don’t have a way to pay for that.”

New Mexico has come a long way in improving schools, said to David Abbey, director of the state Legislative Finance Committee and chairman of the Public Schools Capital Outlay Council, which governs the facilities authority. He pointed to nearly two decades of state investment in renovating school buildings — the result of a lawsuit alleging inequities in capital funding — totaling $2.5 billion since 2005.

“We’re a model for the nation in how to manage our school infrastructure in an equitable way and complying with the constitutional requirements for adequacy,” Abbey said. “Most kids are in safe, modern buildings, and the exceptions we’re working on.”

State law offers New Mexico’s school districts several ways to raise capital funds when they need to build, repair or renovate infrastructure. A district can ask voters to approve a relatively modest tax levy. It can sell bonds with voter approval. It can seek money directly from a legislator. Or it can sell off assets.

Each has its limits. Tax levies can be passed only every five or six years, while the value of property in a district caps both its tax levy limit and its bond capacity. Voter approval in a levy or bond election is never certain. Money from a legislator can be struck or vetoed.

Funds from bond sales and tax levies can be used to fund capital projects, but it is up to a local school board how to spend the money.

In recent years, at least two school boards — Española and Chama Valley — have held multimillion-dollar bond elections to fund new football stadiums. Yet both districts are rife with school buildings in which multiple systems are outdated or at risk of failure, according to state data.

In part because traditional sources of capital funds are not equal or dependable for all districts, the largest capital funding pot is in the state’s hands.

A lawsuit, filed in 1998 by the Zuni Public School District, argued reliance on levies and bonding led to inequities for poor, rural areas dominated by mostly Native American populations.

The court agreed, and in 2000, New Mexico was forced to set up a dedicated funding stream for capital improvements. The state now sells bonds backed by severance taxes collected from the oil and gas industry, and part of the money goes into a pot that funds capital outlays for public schools.

The Public School Facilities Authority and Capital Outlay Council rank school buildings from worst to best each year, using measures that consider the condition of a building and its systems, along with how well the facilities match student needs. Schools that are ranked the worst may apply for capital funding.

But the money comes with strings attached. A school district must match a portion of the state’s funding, based on a formula that is set each year and takes into account a district’s relative wealth. That match comes from the traditional sources of capital funds: bonds or tax levies.

And that is where districts can be frozen out if they can’t pass a tax levy or bond.

Daniel Benavidez, superintendent of Zuni public schools, said his district — which is entirely on the reservation and thus has no capacity to bond or levy property taxes — saved five years in order to raise $600,000 for a dirt baseball field.

Compare that, he said, with a district that can bond and pay for a field — or school building — overnight.

“On paper, the [capital funding system] is equitable, just like on paper our school funding formula is equitable,” Benavidez said. “If they put enough money into both systems they would be incredible. Just because it’s equitable on paper doesn’t mean it can’t be improved.”

In 2017, the state estimated that it would take $188 million annually to maintain school facilities in their then-current condition. But that same year, the capital outlay council awarded only $14 million to three districts across New Mexico. The following year, in 2018, it awarded $23 million to 10 projects. For next year, it received 31 applications from 17 districts, with a total cost of $25.5 million; it will announce awards in December.

Abbey noted that despite the billions in capital investment, New Mexico’s students have made modest gains in test scores and other measures of achievement.

“We’ve poured money into fixing the school buildings,” he said. “We want kids to have a safe learning environment, but most of all we want improved outcomes.”

Gutierrez acknowledged the investment and the desire for better outcomes. But she also stressed that the state of facilities and learning are interconnected.

“Our kids and teachers deserve to be in better facilities,” she said. “That’s where it happens, in the classroom.”

Help your neighbors; cut off the politicians

3rd Congressional District could still be a horse race

It's time for the civil courts to shut down