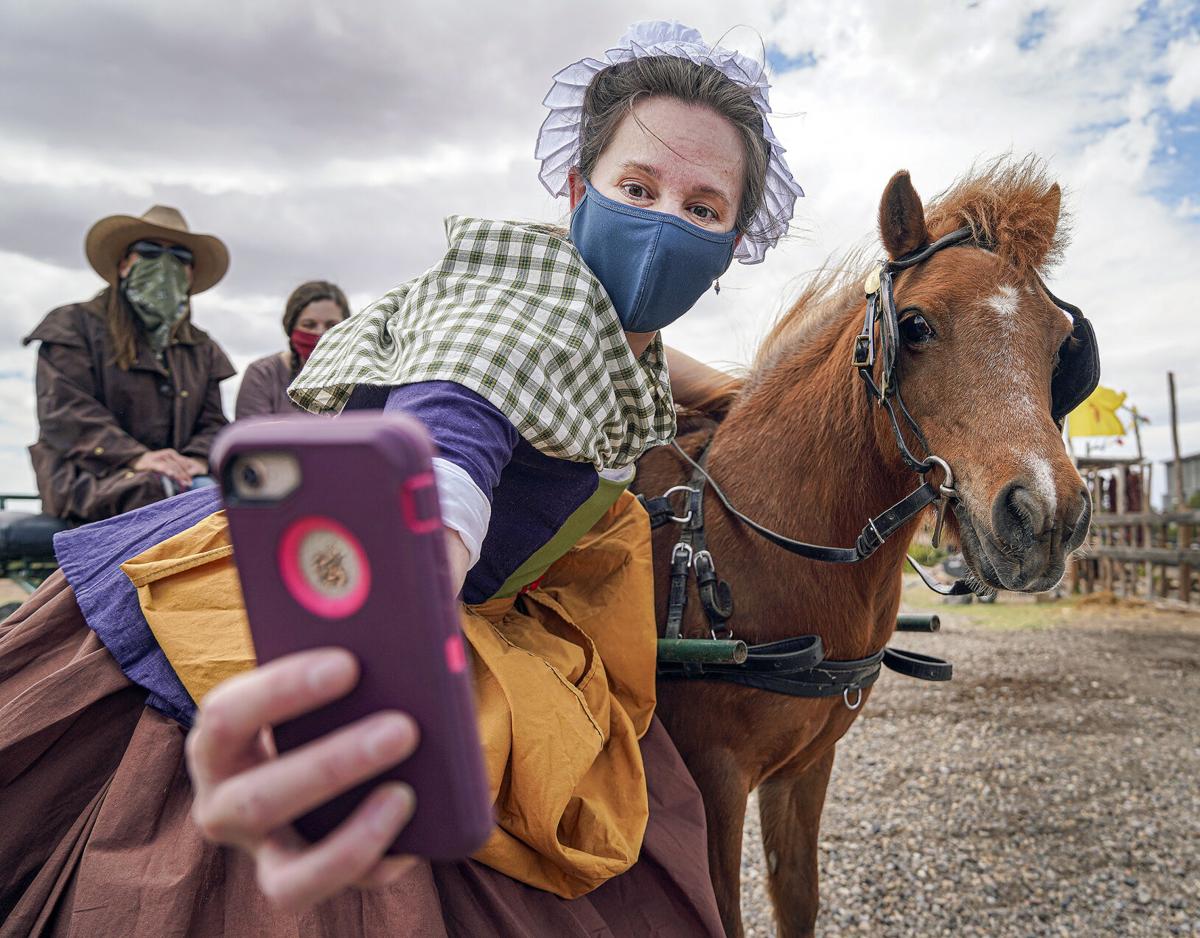 Kim Davis, a French teacher at the Academy for Technology and the Classics, wears a costume Friday at the school’s Frontiers Day event and poses with Pumpkin, a miniature horse owned by math teacher Jessica Victor. 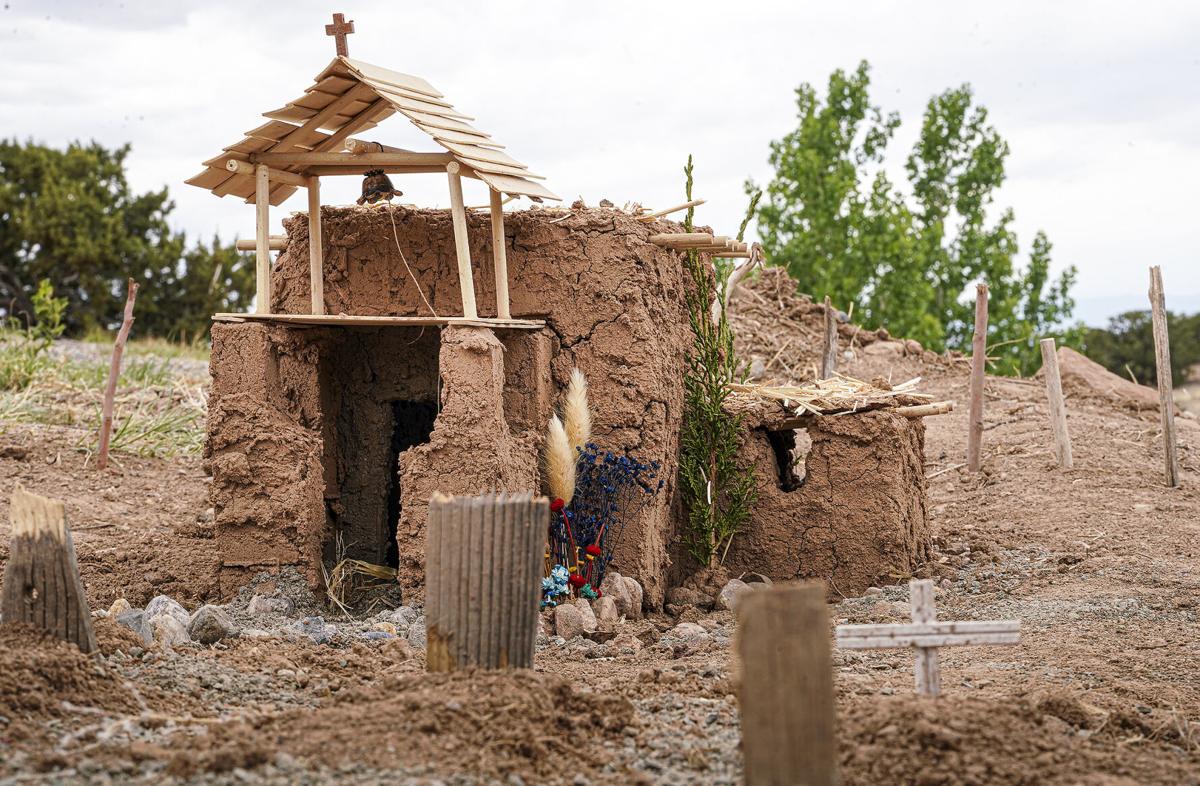 Seventh grade students at the Academy for Technology and the Classics built an adobe church complete with a cemetery as part or their miniature pueblo. 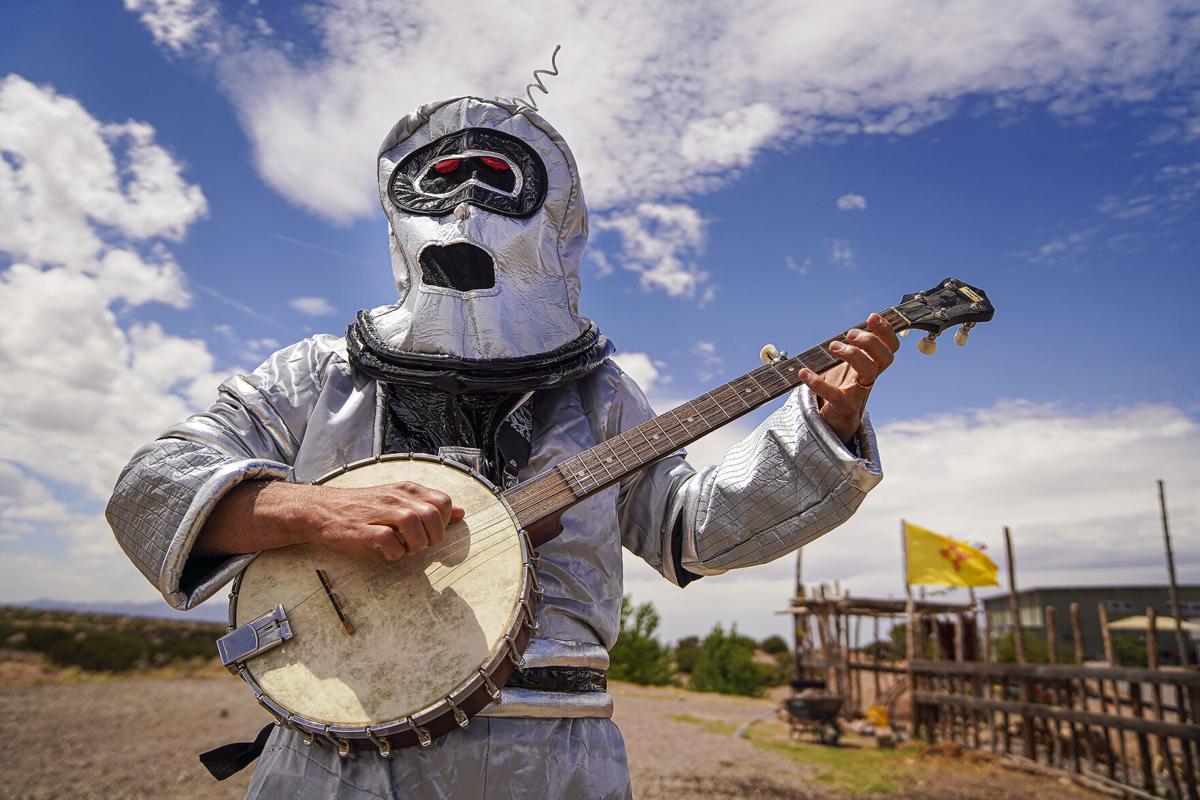 Eric Carlson, music teacher at ATC, strums his banjo as he wanders among the exhibits set up for Frontiers Day. 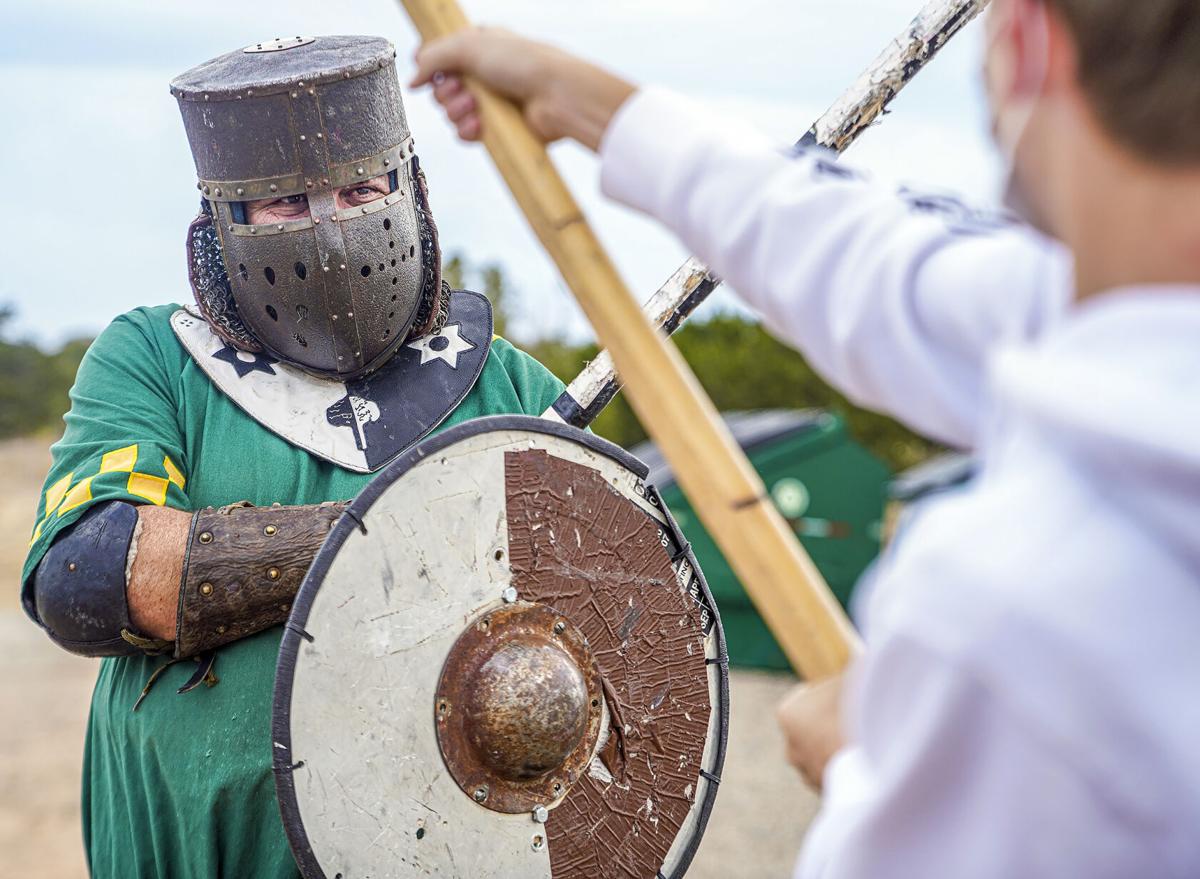 Robert Mathis, history teacher at ATC, is dressed in medieval armor as he spars with students during Frontiers Day on Friday afternoon.

Kim Davis, a French teacher at the Academy for Technology and the Classics, wears a costume Friday at the school’s Frontiers Day event and poses with Pumpkin, a miniature horse owned by math teacher Jessica Victor.

Seventh grade students at the Academy for Technology and the Classics built an adobe church complete with a cemetery as part or their miniature pueblo.

Eric Carlson, music teacher at ATC, strums his banjo as he wanders among the exhibits set up for Frontiers Day.

Robert Mathis, history teacher at ATC, is dressed in medieval armor as he spars with students during Frontiers Day on Friday afternoon.

A miniature pueblo constructed by seventh graders at the Academy for Technology and the Classics is teaching students large-scale lessons about New Mexico history.

The project, headed by history teacher Joaquin Martinez, is alive with farm animals, yucca plants, the recreation of a Catholic church and even a graveyard.

“For a lot of people, history is boring. And for me, it’s just so alive,” said Martinez, who devised the pueblo project as part of his curriculum 21 years ago when he was teaching at now-defunct De Vargas Middle School.

Next spring, the village will be washed-out ruins — ripe for archeological exploration conducted by Martinez’s next batch of seventh graders. But for now, a deep and narrow trail carved into the land at the school leads to the vibrant community.

“Some people made [houses] with adobe molds. We used dirt, and some people used hay or straw to make it stronger,” explained seventh grader Luis Gomez, standing alongside a group of peers.

Last week, heavy rains washed a lot of construction progress away. But Martinez’s students know such risks make the project even more true to life.

“Some survived and some didn’t,” Gomez said.

As they toured the community they built, the group of middle schoolers talked over one another and chipped in with historical dates of note and prominent historical figures.

“It’s one big community that we all made our houses with,” said seventh grader Anna Ochoa. “And some of them have fallen and become ruins and some of them saved … it’s kind of representative of our whole class and our whole culture.”

Martinez said the project gives students a chance to see how New Mexicans in an earlier time lived and survived.

Behind the school, students sold sweets and refreshments to raise money for a field trip, with plans to donate the remaining funds to a charity of their choosing. One teacher brought a miniature horse, offering carriage rides to students. Sweet smoke from a newly constructed horno drifted across the scene. The oven was being prepared to cook up a pizza as local flamenco singer Vicente Griego crooned into the haze.

A new bulto of St. Francis carved by local santero Pete Ortega stood watch from the entrance of the pueblo.

In order to teach New Mexico history, a standard requirement for students in the state, Martinez takes his students through a study of the area’s geography, plus Spanish colonialism and the Pueblo Revolt. But the history lessons also continue into present time. At ATC, a charter school in Santa Fe Public Schools, history requirements for seventh and ninth grade are condensed into the seventh grade year, so it’s a lot of history in one go.

Martinez said he uses an interdisciplinary interactive curriculum that guides students through the creation of a pueblo and asks them to build character identities related to the land’s rich history. Students also produce handwritten manuscripts and art pieces.

Gomez harkened back to his family’s own roots and devised a character story about a farmer from Chihuahua, Mexico, who immigrated to New Mexico in the late 1800s. On Friday, he sported a crisp dress shirt and a cowboy hat. Another student portrayed a scientist at Los Alamos National Laboratory.

Ochoa, donning a black-and-white outfit, created a skeleton who arrived in New Mexico from the spirit world and time-traveled through the centuries to meet Spaniards, the Navajo people and others tied to the state’s culture.

“I learned about how New Mexican culture is a mix between Pueblo culture, Spanish culture, all that good stuff,” Ochoa added. “And it was really neat to find that out.”

Martinez said the hands-on approach appeals to students who aren’t always thriving in traditional classrooms. He said if they were only measured by standardized tests, they might lose confidence in their abilities.

“I have high expectations, clear goals, with an equal amount of freedom and responsibility,” he said. “… It creates an environment where students can develop integrity and push themselves past traditional frontiers.

“One of my favorite parts about this is that students, who I’ve had all year who are shown to struggle academically with the computers, the paper and pencil, will go out and be the superstars of this pueblo,” he added. “They will be the leaders; they will be the ones who help the others build their homes, do the planning. And that’s where those students really shine.”