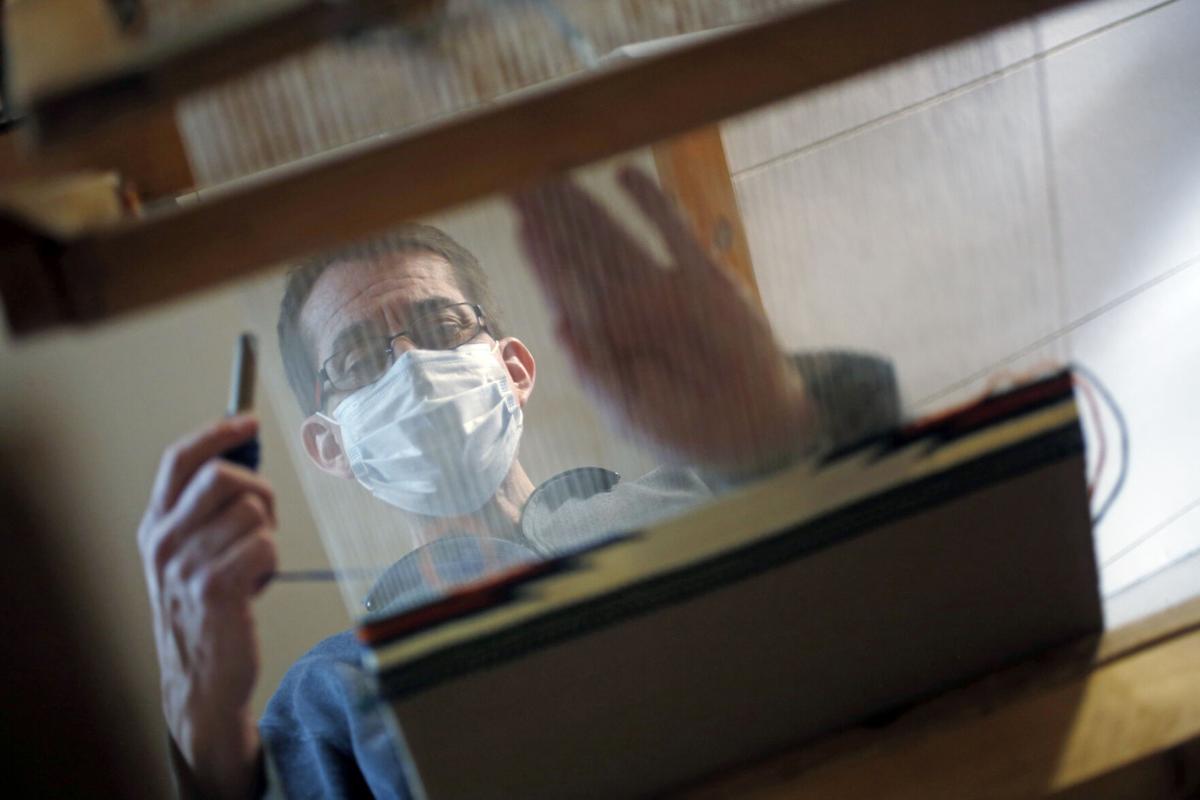 Richard Trujillo works on a table runner Tuesday at his weaving shop in Chimayó. Trujillo is from a long line of prominent master weavers in the area. He’s partnering with New Mexico State University for a new Wool Heritage Project, which aims to highlight the history and importance of the wool industry in New Mexico. 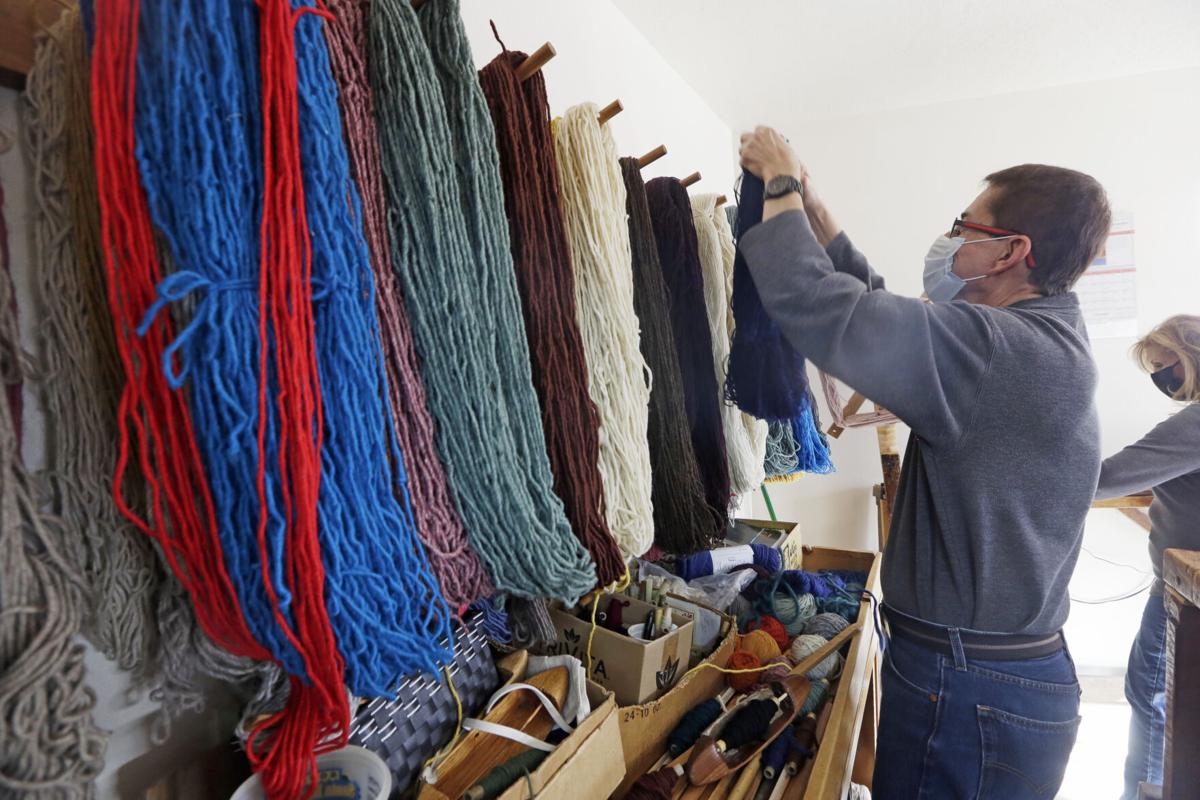 Trujillo grabs indigo wool to work on a table runner. He is a seventh-generation Spanish weaver in the village along the High Road to Taos, where in previous centuries families like his would raise sheep and spin their wool into yarn. 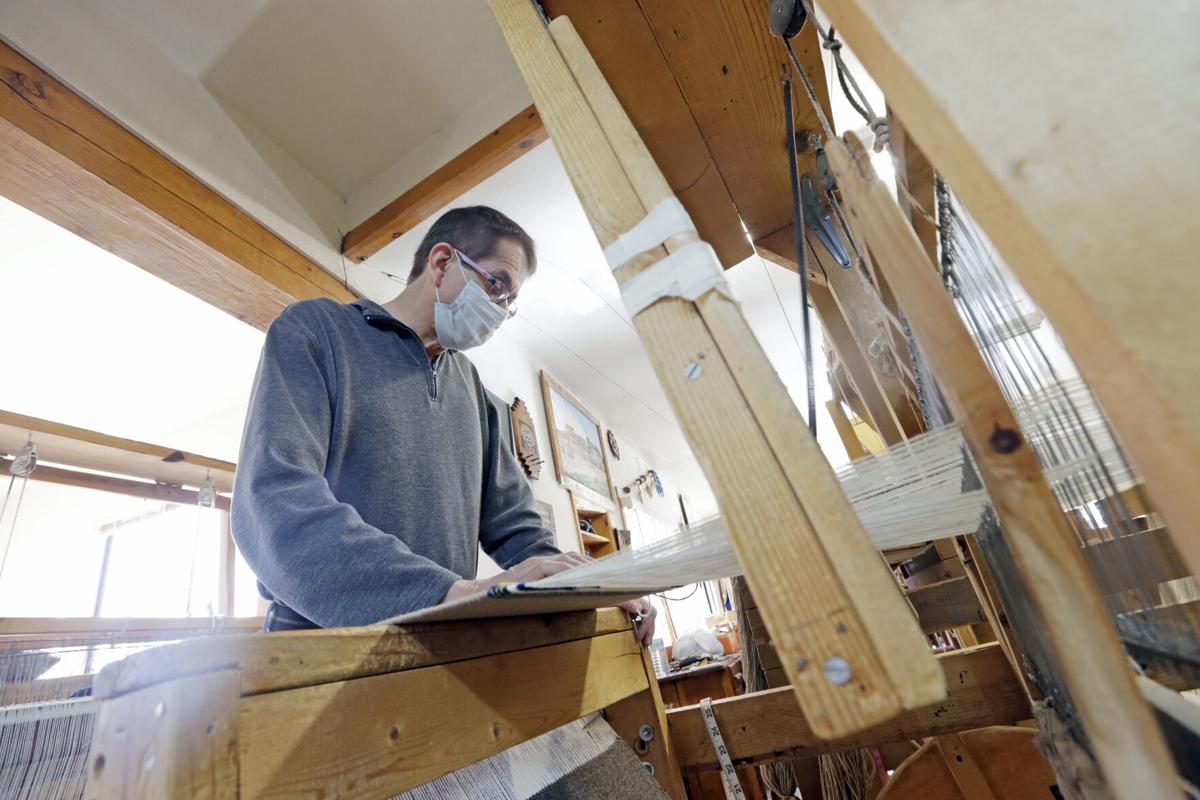 Richard Trujillo works Tuesday on a table runner at his weaving shop in Chimayó.

A New Mexico State University initiative aims to help secure the future of a pair of centuries-old practices in the state: herding sheep and weaving their wool into designs, both spectacular and utilitarian.

The goal of the initiative is to bring attention to two industries, weaving and sheep farming, which advocates say have dwindled in recent years.

The shop where Trujillo completed the rug is packed with handmade wooden two-harness looms, including one built by Trujillo’s grandfather more than 100 years ago. Others were bought from families who no longer take part in the weaving tradition.

“A lot of visitors we get have never seen anything like this,” he said of the setup. “They’re just amazed at the process.”

Trujillo is a seventh-generation Spanish weaver in the village along the High Road to Taos, where in previous centuries families like his would raise sheep and spin their wool into yarn, trading woven textiles for other goods to make a living.

His late father, John Trujillo, opened the shop in the 1950s.

Trujillo himself started learning to weave around the same time most children head to preschool, and while some younger family members are showing interest in the art, “it’s getting harder and harder to find people who are willing to take it up,” he said during an interview, taking a break from weaving a colorful table runner on commission.

There are a few weaving shops in Chimayó, where the tradition is still prominent compared with neighboring villages, including Ortega’s Weaving Shop and Centinela Traditional Arts.

“We’re all pretty much cousins,” Trujillo said of the people running neighboring shops.

The wool used to make the colorful vests and cloths available at Trujillo’s Weaving Shop is harvested and produced from all over, he said. The final products are shipped worldwide, Trujillo said, adding there’s notably high demand for woven vests from a shop in Tokyo.

Trujillo is an alumnus of New Mexico State’s geography program, and the rug he brought to life features the crimson and white shades of the university’s logo.

The wool comes from a flock of roughly 100 New Mexico-bred debouillet and rambouillet sheep of the West Sheep Unit on New Mexico State University’s campus, where students raise them as part of the animal sciences program.

Trujillo said the wool was especially soft and fine.

“We really on campus haven’t, until this project, really done much with linking back into the fiber arts,” she added.

Usually, Hernandez Gifford noted, the sheep are shorn annually as part of their upkeep.

But this year, she saved the wool and sent it to a mill in Buffalo, Wyo., where it was processed into yarn in order to launch this project in cooperation with the university’s fashion merchandising and design program.

Using the remaining yarn, the university has made available 80 blanket replicas of the original rug, which is on display at New Mexico State.

The blankets, at 4 pounds each, cost $500. Hernandez Gifford was worried the price might be a deterrent, but 30 have already sold.

Hernandez Gifford predicts that when the sheep are shorn again, another product will be made available for purchase, with proceeds going toward the cost of processing more items.

Hernandez Gifford said that while New Mexico ranks 16th among states for sheep production, the wool mills and the sheep farms that were once more widely prominent have faded in part since the end of a federal wool subsidy during the 20th century.

“The number of sheep in the state has really dwindled,” she said. “So that’s really is why we have to [mill] out of state. There’s no availability anywhere closer … and they do such a great job.”

Sheep didn’t start calling New Mexico home until Spanish colonizers brought the particularly resilient Iberian Churra breed with them to the Southwest in the 1500s. Those are likely the sheep Trujillo’s family first used for wool for their textiles.

Before that, different groups of Pueblo people practiced weaving baskets and other goods from animal hair, plant fibers and eventually cotton.

The Navajo people living in what is now Arizona and New Mexico acquired sheep from the Spanish, and the resulting livestock called Navajo Churro have since become an integral part of life for their meat and wool.

In the Navajo weaving tradition, fabrics are developed on a frame loom, rather than the standing looms Trujillo’s family uses. But Trujillo said both traditions render geometric designs.

Through the 1930 century, the U.S. government called for stock reductions of the sheep on Navajo land, citing concerns about erosion caused by grazing, which has contributed to the Navajo Churro landing on the endangered species list, according to weaving company Tierra Wools co-founder Molly Manzanares.

She favors the sheep for their low-grease wool and natural color variations, which save resources on cleaning and dyeing.

“They’re not as domesticated as, say, rambouillet or another kind of sheep,” she said. “They’re very self-sufficient.”

Manzanares’ company holds a flock of hundreds of Navajo Churra near Chama.

Part of the decline in sheep farming, Manzanares said, comes because raising sheep was traditionally a communal effort. Neighboring sheep farmers would work together to protect flocks from predators, mainly coyotes.

“They’re hard,” she said. “We’ve been raising Navajo Churro for all these years and trying to bring them back, and finally we’re getting in the groove. The drought … has made a big impact.”

“A lot of weavers in the northern part of the state, you don’t hear a lot about what they do,” Coffeen said. “Some of them work for some of the big designers in New York.”

She added: “That whole industry is looking for authenticity and looking for ways to be unique. … We have to be aware of that and embrace that for what it is in our state.”

For more information on the project or to purchase a wool blanket replica of the original rug, visit facebook.com/NMSUWestSheepUnit.

As a wool spinner myself, I love this new attention to New Mexico's tradition of sheep raising, spinning, and weaving. Managed properly, wool production is beneficial to the environment, and wool has so many advantages over polyester for clothing.