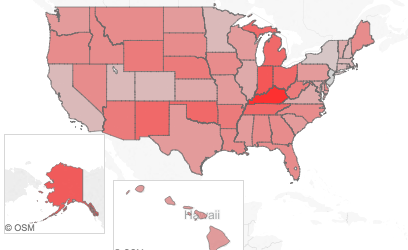 Ten percent of New Mexico children have had at least one parent incarcerated at some point in their lives, one of the highest such rates in the nation, according to a study released Monday by the Annie E. Casey Foundation.

The report, titled “A Shared Sentence,”says only Kentucky, where the rate is 13 percent, and Indiana had higher rates than New Mexico. Five other states — Alaska, Michigan, Ohio, Oklahoma and Tennessee — were also at 10 percent. The national rate is 7 percent.

“This issue carries a lot of stigma with it,” said Ryan Chao, who is affiliated with the Baltimore-based, advocacy-driven Casey Foundation. “There is this silent but very traumatic effect on kids and families — the whispers in the hallway — and the issues that arise for folks who find it difficult to bring [the subject] forward and think there is nowhere to look for help.”

The report described how a parent’s incarceration can affect a family financially, lead their children to want to quit school and contribute to mental health issues. The authors suggest reducing levels of incarceration for nonviolent offenders, get judges to consider the impact on defendants’ families during sentencing and create programs to help families cope with the situation when a parent does spend time behind bars.

Chao said this is the first time the national organization, which compiles the annual Kids Count report on the social, emotional and economic well-being of children, has delved into the subject of incarcerated parents.

The report comes within a year of similar studies looking at the academic impact on students who are struggling to stay connected in school while their father or mother is behind bars. Most of those reports — from such entities as Rutgers University, the Journal of Health and Social Behavior and the National Survey of Children’s Health — say that children with an incarcerated parent are predominantly in low-income families of color, with the majority under the age of 10.

The report lays out some of the negative consequences for children in this situation. When fathers are incarcerated, for example, the family’s income can fall by an average of 22 percent. The trauma a child has to deal with as a result can lead to an increase in mental health issues and higher drop-out rates in schools.

Leah O’Shell, the Santa Fe school district’s director of family and community engagement, has seen firsthand how the situation hurts kids. Many older students immediately feel a responsibility to get a job and help out the family financially, she said. And that means they start missing class.

“It weighs heavily on them, and they get horse blinders on where they can only see the loyalty to their family and survival,” she said. “Then it’s hard for them to look past their immediate program to what their long-term goals are and how much better they would be if they reach graduation day.”

“A Shared Sentence” also reports that even after incarcerated parents return home, challenges remain if they find it difficult to get work or do not have support resources to help them stay on track. “Families with fathers who have been incarcerated are more likely to live in poverty than those who have never experienced the effects of incarceration,” the report says.

The report suggests several ideas for addressing the problem. One is to reduce levels of incarceration for those convicted of nonviolent crimes without compromising public safety. Another is to have judges take the family into consideration during the sentencing process, including ensuring the incarcerated is not imprisoned too far from the family’s home so children can maintain some sort of connection if they want.

Creating support groups, be they in school or after-school, for children and teens with incarcerated parents can offer a place for them to interact with peers and set up visits to prison. The report cites a few successful examples of this idea, such as Atlanta’s Foreverfamily and New York’s Center for Community Alternatives program.

“We need to look at how we as a society work to support our families when someone is incarcerated,” said Veronica Garcia, executive director for New Mexico Voices for Children, an Albuquerque-based nonprofit advocacy group. “For example, many families can find themselves in a situation of not being able to pay the rent and having difficulty paying for food, which creates an instability in the home and adds to the emotional impact to children. Are we providing counseling and other support services to the family?”

Chao said some states place limits on eligibility for food stamps for convicted felons, for example. “What we hope to make a point on is that it is not fair for someone who has served time to be excluded from those opportunities, because you are excluding the whole family, in a sense,” he said.

The report does state that in some cases, including incidents of child and domestic abuse, parents should be incarcerated to ensure the child’s well-being.

Visit www.aecf.org to view the entire “A Shared Sentence” report.

Percentage of children experiencing the incarceration of a parent 2011-12

EXPLORE: Hover over or click on a state in the map for more information. Use the list of states on the right to add or remove information in the chart below the map.
Source: Child Trends’ analysis of the 2011–12 National Survey of Children’s Health for the Annie E. Casey Foundation. These data only include children whose incarcerated parent lived with them at some point.