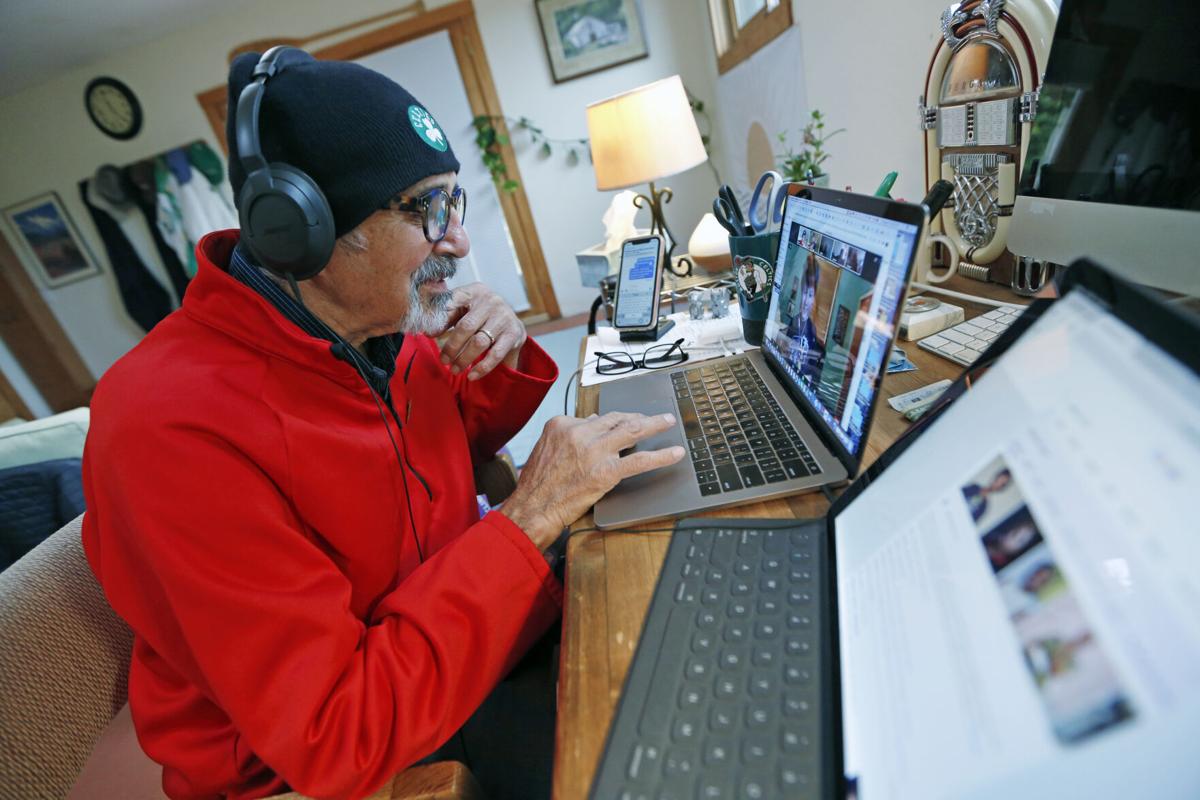 Alfredo Celedõn Luján, a seventh grade English teacher at Monte del Sol Charter School, leads a class of 19 students from his home Thursday. Luján is the first New Mexican and first Latino president in the 111-year history of the National Council of Teachers of English. 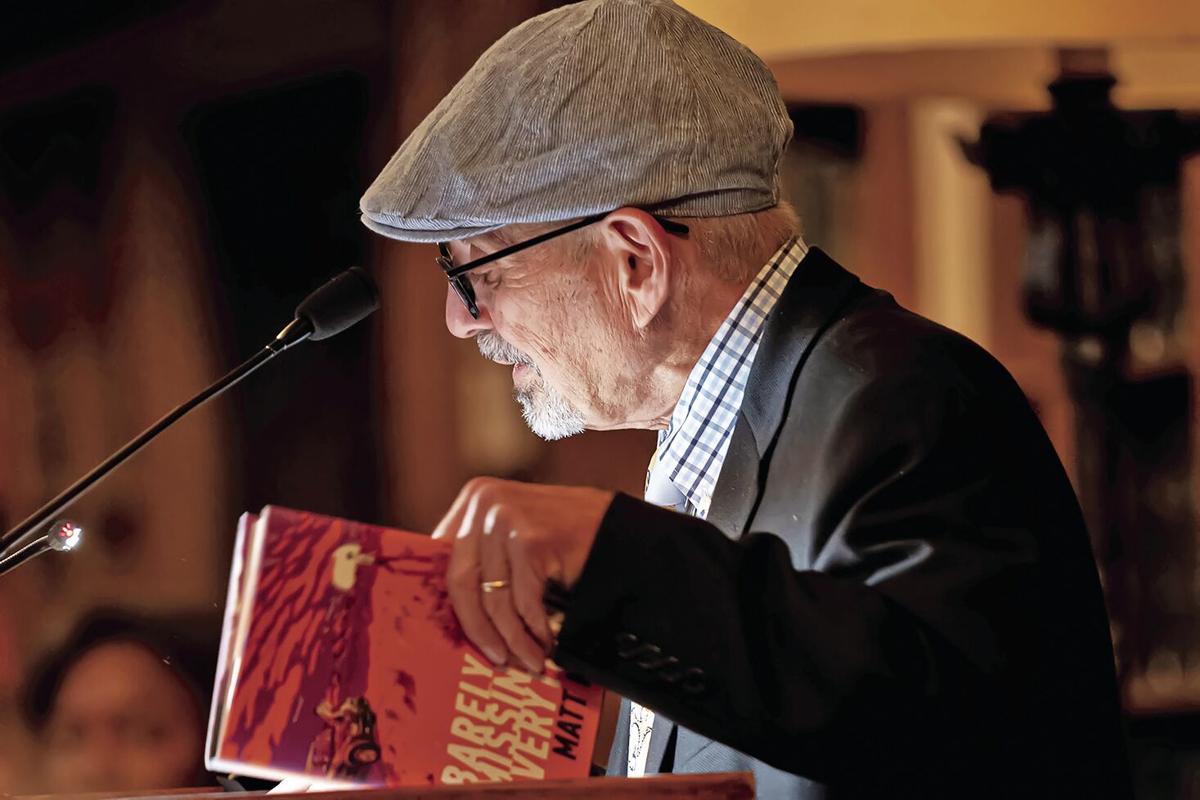 Alfredo Celedõn Luján, a seventh grade English teacher at Monte del Sol Charter School, leads a class of 19 students from his home Thursday. Luján is the first New Mexican and first Latino president in the 111-year history of the National Council of Teachers of English.

When Emily Kirkpatrick dies, she wants Alfredo Celedõn Luján to give her eulogy.

Kirkpatrick, executive director of the National Council of Teachers of English, made that proclamation while she gushed over Luján, the organization’s new president who has spent the past 20 years in a variety of roles at Monte del Sol Charter School in Santa Fe. It stems from watching him introduce keynote speakers at council functions.

In the summer of 2019, Luján, 70, introduced up-and-coming Latino author Matt Mendez for a keynote address at an event at the Folger Shakespeare Library in Washington, D.C., and all Kirkpatrick could think was, “How does Mendez top that?”

“His introduction of Matt was so incredibly touching and vibrant,” Kirkpatrick said. “It was the highlight of the evening, and I’ve seen Alfredo do this a number of times.”

It seems that Luján has a way of making his mark on people through his calm, understated personality. What can’t be understated is the impact he has made in his academic career. Luján is the first Latino president in the 111-year history of the council, which is devoted to improving and teaching language arts at all levels of education. He also is the council’s first president from New Mexico.

Luján ran for a spot on the council’s presidential team in 2017 and was elected vice president, and became president-elect in 2019 before taking his post this summer.

His calm, thoughtful personality is a clever veneer for a teaching passion that burns inside. It was forged as a teen growing up in Nambé who connected more with reading local sports stories in newspapers than the books in his English class. That was because of the dearth of Latino literature taught at Pojoaque High School.

When he first read Rudolfo Anaya’s novel Bless Me, Ultima in 1972 while studying at New Mexico State University, Luján saw himself reflected in the main character, Antonio Márez y Luna, in what was an eye-opening experience. He didn’t want that epiphany lost on the next generation of students.

Luján’s passion since then has been to help students find their voice through the literature they read and the way they write. It also helped him carve a path that led him to teaching positions at Pojoaque middle and high schools, the now-defunct Native American Prep School and at Monte del Sol.

Head learner Robert Jessen said Luján has been an invaluable part of Monte del Sol, having worked as a teacher, coach and dean of students during a 20-year career. Luján won the national Golden Apple Award for Excellence in Teaching in 2014.

“We feel very lucky,” Jessen said. “He is just so rooted in the community. He knows everybody and has so many cousins all over the place. If we need to know something, we go to him.”

Along the way, Luján has been an active member with the council since he started attending its convention in 1987, offering a voice that expressed the value of what he calls “equity.”

His advocacy on that front led the council to recognize him with its Advancement of People of Color Leadership Award in 2017. He also has served on the organization’s Executive Committee, the Secondary Section Steering Committee, the Assembly of Rural Teachers of English and was chairman for both the Commission on Literature and the Committee Against Racism and Bias in the Teaching of English.

Kirkpatrick said Luján is the right person at the right time for the council. He will lead the organization’s journey into its first virtual convention in November. It was to be held in Denver, but the coronavirus pandemic will not allow thousands of educators and members in one setting. So, Luján embarked on creating a virtual event that will provide the kind of learning environment that will be useful for all who watch from their computer.

First came the theme for the convention: ¡Confluencia! Songs of Ourselves. Luján said he liked the concept of confluencia, or confluence, because it fit his idea of merging various concepts and ideas from different backgrounds.

“With the pandemic and political climate we’re in, I think representing the minority and the biculturalism and bilingualism is important in America,” said Luján said, whose cousin is U.S. Rep. Ben Ray Luján of New Mexico.

Luján said the council received more than 2,600 proposals for seminars, sessions and workshops, which Kirkpatrick said was the most it has ever received. Also lined up are a host of notable speakers, including a pair of poets laureate — Joy Harjo and Juan Felipe Herrera — plus Black Lives Matter co-founder Patrisse Khan-Cullors.

Kirkpatrick wasn’t surprised that Luján was able to pull off a list of distinguished guests. It speaks volumes of his stature within the organization as well as an instructor, she said.

“He is known by all,” Kirkpatrick said. “Knowing Alfredo as I do, it is really uncommon where someone is known and beloved like he is. The higher education audience knows and loves him, as does the K-12 audience.”

As does Kirkpatrick, who knows Luján will send her off in style if the need arises.

Congratulations to Mr. Lujan! So wonderful to see a local hispanic win such a prestigious position :)

Congratulations to Alfredo! He has been the heart and soul of the Santa Fe branch of the Middlebury graduate program for years, so I am happy to see him honored nationally.