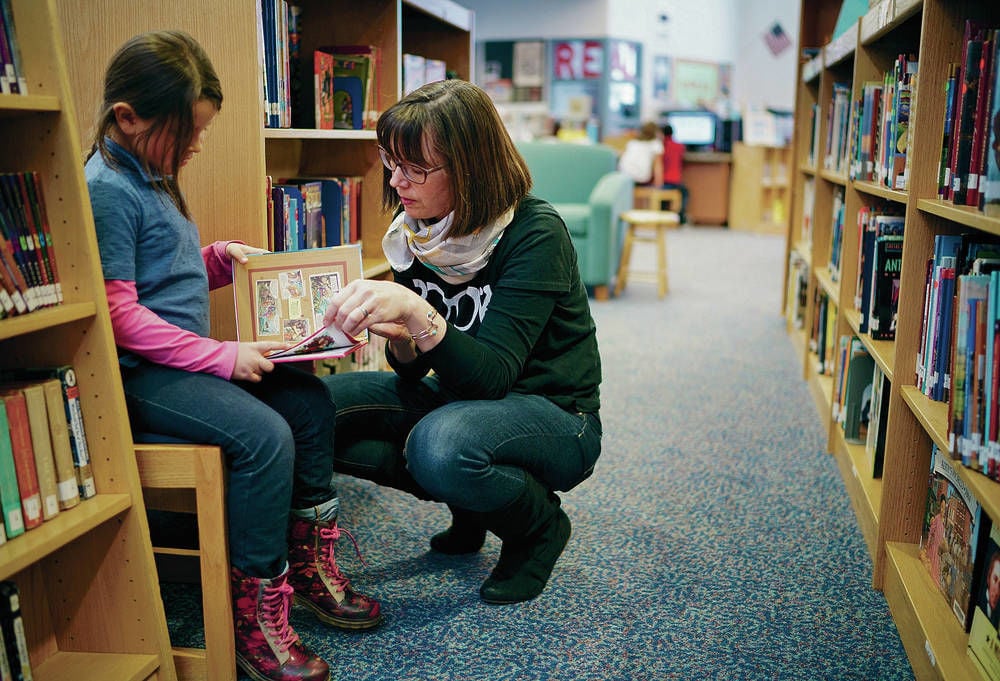 Gonzales Community School librarian Kelly McCabe helps Olvia Santos, 6, find a book to read. McCabe says for students, library time “gives them choice and the chance to explore things that they are interested in.” Craig Fritz/for The New Mexican 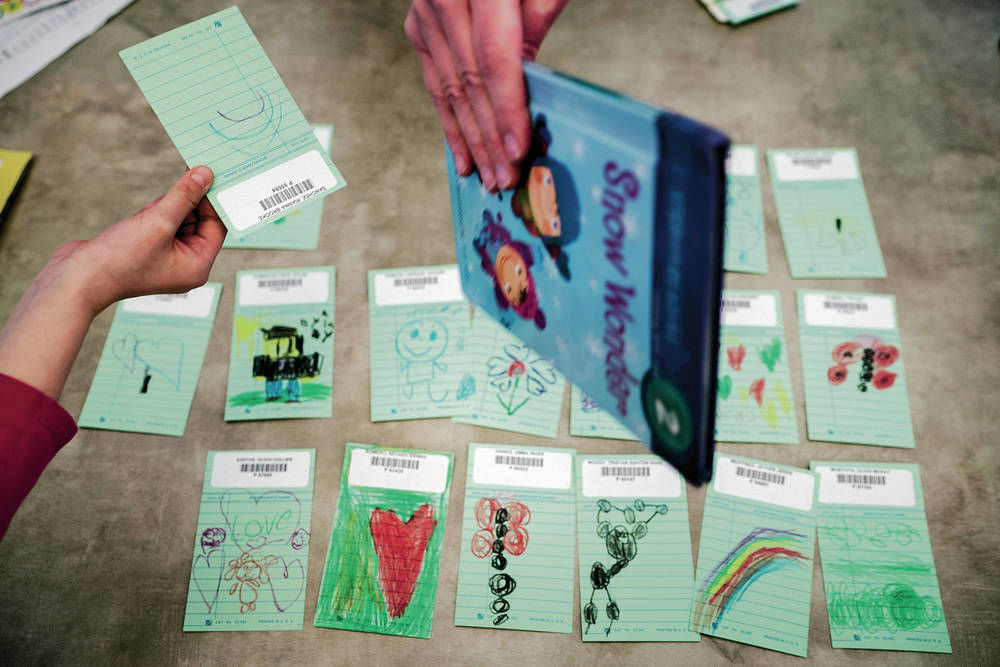 Gonzales Community School librarian Kelly McCabe checks out books last month for students who had made drawings on their library cards. Craig Fritz/for The New Mexican 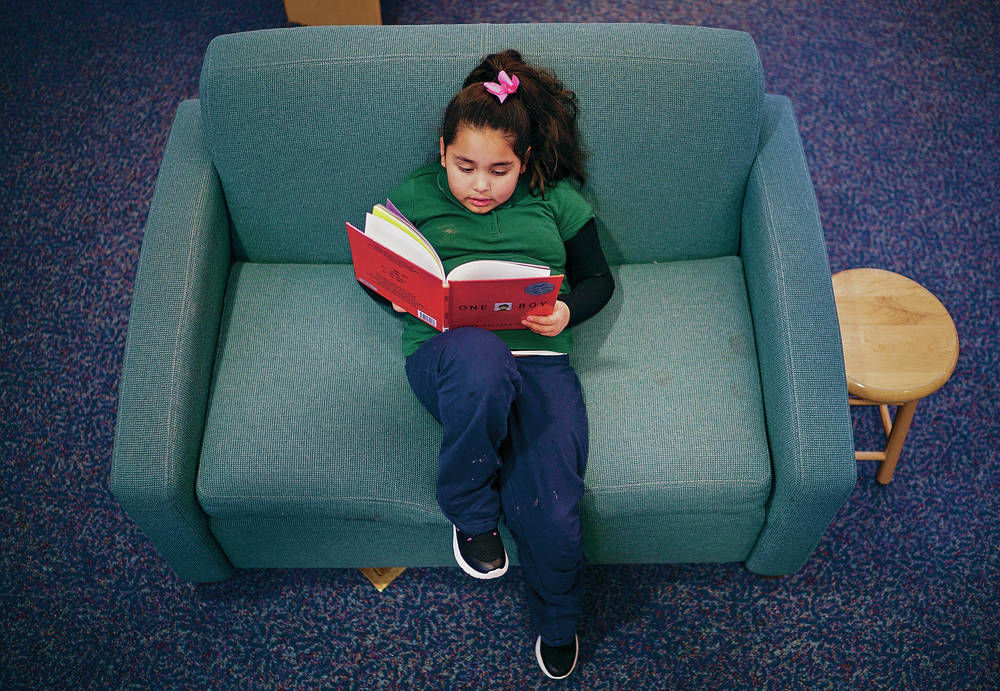 Gonzales Community School librarian Kelly McCabe helps Olvia Santos, 6, find a book to read. McCabe says for students, library time “gives them choice and the chance to explore things that they are interested in.” Craig Fritz/for The New Mexican

Gonzales Community School librarian Kelly McCabe checks out books last month for students who had made drawings on their library cards. Craig Fritz/for The New Mexican

The 18 second-graders sitting on a brightly decorated reading rug in Kelly McCabe’s library at Gonzales Community School listened attentively as she read aloud from Jan Brett’s book The Mitten, based on an old Ukrainian folk tale.

McCabe read clearly and slowly, building time into her presentation to let the children ask questions and comment on the storyline. She reinforced words they were learning in their other classes, such as “adaptation” and “genre” and “myth.”

Then, for the second half of the library session, she set them loose to conduct research, read a favorite book on their own, listen to audio books, visit with the fish and hermit crabs in aquariums in the room and — perhaps best of all — let them play librarian, right down to checking out each others’ books to take home to read.

“I have freedom a lot of teachers don’t have,” said McCabe, an ever-smiling 46-year-old who has worked as the school’s librarian for five years. “For a lot of these students, this [library class] is a break from the regimented curriculum and testing that teachers have to adhere to. It gives them choice and the chance to explore things that they are interested in.”

But McCabe and other school librarians around the state and nation worry it may get harder to offer children that experience. That’s because Santa Fe Public Schools, like other districts in the country, has gradually cut down on the number of certified librarians on staff (just five in a district with 30 school sites). In their place are educational assistants who are paid less — and, perhaps, know less.

Though those assistants may be hardworking and talented, they do not have the background or knowledge that matches that of a certified librarian, some say. For example, educational assistants do not have to earn college degrees certifying them as teachers or take 36 hours of college course work to prepare them for the librarian’s job, including how to develop a book and research collection.

And that’s a “serious problem,” said Marian Royal, president of the New Mexico Library Association and coordinator for district libraries at Albuquerque Public Schools. “It’s bad, and sadly, it’s not an uncommon picture in many states in this country.”

School districts around the nation — including Chicago, Philadelphia and Wichita, Kan. — have been eliminating librarian positions for at least a decade, citing financial challenges and the need to use that money for other human resources, such as counselors, nurses and teachers.

Several years ago, leaders of Santa Fe Public Schools gave principals at each school site more autonomy in building their own budgets, believing they were best suited to determine what types of staff and resources their students need.

Over time, Royal said, many chose to eliminate the librarian position for one reason — funding.

In Albuquerque Public Schools, for example, the average salary for a librarian-teacher is about $42,000, Royal said, while the average educational assistant salary is about $17,000.

But Royal, McCabe and other librarians say their skill set is even more in need now — in large part because of the advent of the internet.

“There’s a lot of talk now about what is ‘fake news,’ ” said Kirsten Johnson, who worked as a school librarian at the now shuttered De Vargas Middle School for 19 years. “And media literacy is what is missing. People don’t have the ability to judge what is accurate information and what is just something that somebody said. With the internet, all information is often treated the same.”

School librarians help students differentiate between reliable sources and questionable ones, she said.

And they work with teachers to reinforce classroom curriculum and encourage reading. McCabe said she meets with each teacher at each grade level at least once a month to discuss what they are working on so she can make that part of her library lesson plan. When she does so in her library, she said, a lot of her younger students say to her, “Hey, I’m learning this in class, too.”

“They think it’s a coincidence,” McCabe said with a laugh.

Libraries and librarians provide a necessary resource for children these days, McCabe says — but that’s not always evident to the average person.

“Some of these students have 100 books at home that their parents help them read,” she said. “Some have none and nobody to read to them. They need to see that [reading] behavior modeled, and a school library allows them to experience that.”

Mike Lee, principal of Gonzales, a K-8 school, said he could “buy” another teacher or two educational assistants instead of having McCabe on hand. But, he said, “I get more bang for my buck having a certified librarian” because McCabe holds classes on conducting research, helps the students with book reports and helps them master reading.

Reinforcing reading skills in a district where young readers are struggling with proficiency rates, Lee said, is a priority. In the most recent round of statewide standardized PARCC tests, 25 percent of Gonzales students scored in the levels of proficiency in English language arts, a little better than average when compared to other K-6 and K-8 schools in the Santa Fe district.

As districts cut back on the number of librarians they hire, those employees often fall back on their teaching certificates to become full-time educators in the classroom. According to the state Public Education Department, 845 teachers in the state are also certified to be librarians, but New Mexico has just 219 teacher-librarians in its 800-plus schools.

That could change — for the better, some hope. The key may be in determining whether librarians contribute to student achievement.

State Sen. Bill Soules, a Las Cruces Democrat who chairs the Senate Education Committee and is a member of the interim Legislative Education Study Committee, wants the latter panel of lawmakers to study and report on the issue by the end of 2018.

“We need to see librarians as part of the whole school culture and not as something that is just an add-on,” Soules said.

He introduced a Senate memorial in this year’s legislative session that called for the Public Education Department to help the New Mexico Library Association assess school library staff and resources throughout the state. But it didn’t get a committee hearing.

Santa Fe Public Schools also is studying the issue and remains open to having more certified librarians in place, said James Luján, the district’s assistant superintendent for equity and instruction. Earlier this month, he met with the district’s five librarians to discuss the issue and learn more about how their jobs affect students.

“Librarians, as professional educators, have a lot to offer … especially as we want to move toward designing libraries for 21st-century learners,” Luján said. “Media literacy, digital literacy, technological literacy and multimedia communications are all specific skills that our librarians must and should develop.

“We have lots of room to improve,” he added. “We are looking at our current conditions with librarians and asking, ‘Where do we go from here?’ ”

While the district will continue to give principals at individual school sites the autonomy to make financial decisions about staffing, he said, district administrators want to know more about how librarians are contributing “toward student achievement, toward student attendance and supporting classroom content across the board.”

He said the district also will meet with its educational assistants to find out what they bring to the job.

McCabe said she doesn’t think anybody is out to get librarians or make them as obsolete as, say, the milkman. But she believes librarians have to advocate for themselves as they find their jobs in danger of being eliminated.

“You’re not going to find somebody who says, ‘I hate librarians,’ ” she said. “But somehow, along the way, it became a nonessential position. It’s not a priority.”