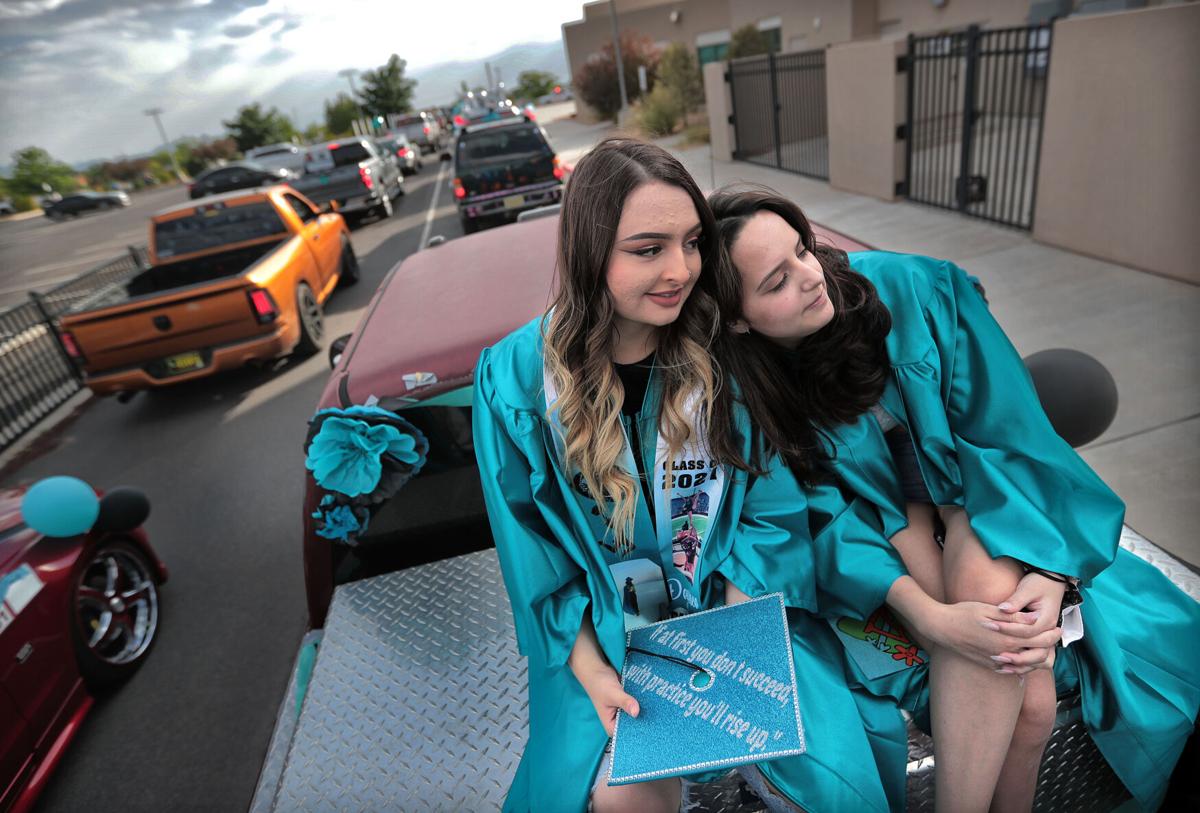 Zoë Martinez, right, and her friend Deyonce Baca relax in her dad’s truck as seniors from Capital High School gather Wednesday at El Camino Real Academy for a graduate parade before their commencement rehearsal. Martinez celebrated her success after a tough year. In addition to the struggles of the pandemic, she required surgery for a health issue unrelated to COVID-19. 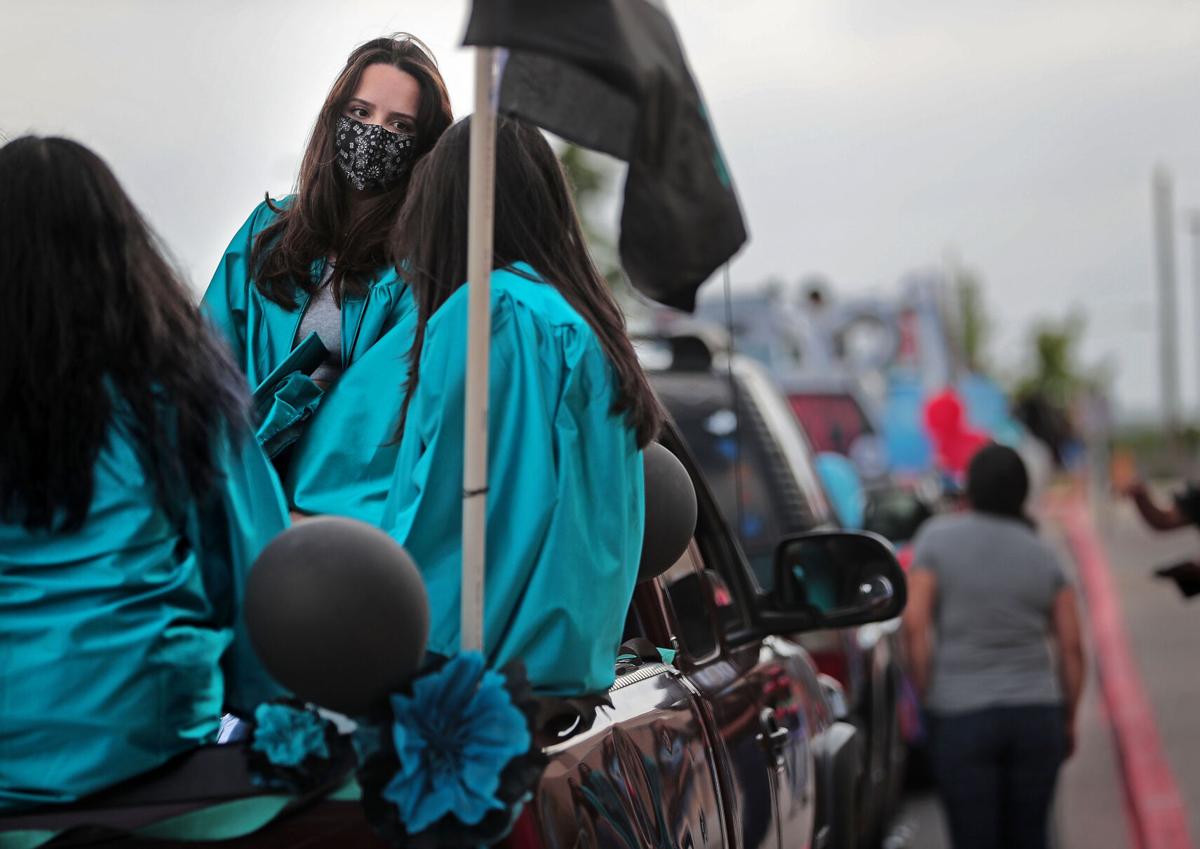 Zoë Martinez, right, and her friend Deyonce Baca relax in her dad’s truck as seniors from Capital High School gather Wednesday at El Camino Real Academy for a graduate parade before their commencement rehearsal. Martinez celebrated her success after a tough year. In addition to the struggles of the pandemic, she required surgery for a health issue unrelated to COVID-19.

As a member of the top 10 percent of her class, Zoë Martinez was one of the first seniors to walk to the graduation stage on the Capital High football field Thursday morning.

With her turquoise graduation gown flowing, Martinez’s ecstatic parents shouted her name from the bleachers stationed on the track.

Families clustered in groups of four held parasols to shield themselves from sun while bouquets of helium balloons threatened to pop in the heat. Some masks slipped below noses as parents and siblings cheered.

This has been a week of celebration like few others for Santa Fe-area graduates, if only because the class of 2021 experienced a school year — and an accomplishment — like no other.

For most, graduating in the time of COVID-19 would have been plenty — with many things to remember, and some to forget.

For Martinez, it was all that and more.

Most of those who saw Martinez step to the stage never would have guessed she’d only recently found answers to a monthslong medical mystery that left her heart skipping beats, her breath too short for her to keep consciousness.

Like others in her class, Martinez readily adjusted to online learning this year. But her world changed radically in early January, when she began drifting in and out of consciousness. After she fainted in mid-conversation with her father, she was rushed to the hospital.

“My heart was skipping beats, and just acting very weird considering my age,” she said in an interview before her graduation.

An echocardiogram later showed that part of her heart wasn’t pumping blood like it was supposed to.

“I felt afraid, and like, helpless,” she said. “I didn’t know what to do and I was just like, trying to stay calm because, obviously, my parents are freaking out because I’m the youngest.”

The scan eventually revealed her problem, a genetic disorder that prompted surgery in April. Though she was forced to quit ballet, volleyball and basketball and endured a recovery that sometimes conflicted with studying for final exams, she’s on her way back to normal.

“I’m able to breathe, I feel happier and also more calm,” she said. “Relieved and energized, as if I can do more.”

The specter of COVID-19, of course, was ever-present: Martinez had to be ultra-careful while physically distancing so she didn’t contract the virus. She missed football games, cheer competitions and basketball games in which her friends participated.

“It sucked that we couldn’t have homecoming or prom,” she said. “Prom is what I was looking forward to my whole high school career.”

She plans to celebrate with her friends in some other way. For now, she’s gearing up to enter the University of New Mexico in the fall to study engineering or science.

But she says her senior year taught her a lesson she’ll never forget.

“You need to prioritize your physical health over school,” said Martinez, thankful to her teachers at Capital for their flexibility and her parents for their support. “But still, understand that school is still important for you to complete and finish.”

Others who went through the pandemic didn’t experience Martinez’s ups and downs, but they can relate to how different this year felt.

For Monte del Sol graduate Axel Lozoya, 18, the year was an emotional roller coaster that ultimately ended in a rainy graduation at The Downs.

“It was a sad day, because we were leaving,” he said.

A self-described auditory learner, Lozoya said he sometimes struggled in online classes — concerned he couldn’t ask many questions. He started getting out of bed just a few minutes before logging in, rather than rising early to get dressed and commute to in-person classes.

That, paired with the demands of a food service job to help his family, started taking a toll on his grades, Lozoya said.

Eventually, he had to cut hours at his job to maintain a better focus at school. And though completing his senior year and planning to play college soccer were big motivators, he said the return to in-person learning was perhaps the biggest boost.

“I think I had the best grades of my life that I ever had when I went back to in-person,” he said.

Lozoya did well enough to make it through, and even spoke at Monte del Sol’s graduation. He hopes to play soccer at the junior college level before transferring to a Division I school to gain his bachelor’s degree in architecture. But he said it was the bonding he experienced with his classmates that helped make it possible.

“We all got closer than we used to be,” he said. “We all saw what we were going through, we all helped each other through the thicks and thins. Being there for each one of my [my classmates] was really important. I don’t think I’ve ever been so attached to my class.”

Deedee Jansen, one of just six graduating seniors at Santa Fe Waldorf School, was able to find those kinds of silver linings.

This year, she did it all. She was student council president, editor of the yearbook and editor of the school’s literary magazine. She also ran track and field.

Jansen is dyslexic, so reading can be a challenge. She opted to learn sign language instead of Spanish at school to meet language requirements. She said the chance to learn more about the deaf community, combined with her own experiences and a burning love for science and math, inspired her to pursue universal design at Austin College in Sherman, Texas. Her goal is to make all environments accessible to everyone.

And while she wasn’t redesigning buildings or anything this school year, she did get to be part of helping make senior traditions happen in a pandemic-safe way.

“I think the idea [that] not everything is accessible for everybody became really prominent this year,” she said. “I think our school has taken huge leaps forward into making sure everything is accessible, and I feel really lucky to be a part of that. A huge part of that is just like, reexamining what makes something special and making sure that that remains while still making it a huge part.”

Santa Fe High Principal Carl Marano, presiding over his final graduating class before he moves to an administrative post at Santa Fe Public Schools, said he saw the transition in this year’s seniors during a recent awards assembly.

As the end of high school neared, he had anticipated a room full of ecstatic graduating seniors. Instead, Marano was met with a calm, collected group of young adults.

“I was just noticing kind of a … almost a sense of calmness. It’s almost like, not that they forgot how to be excited, it’s just a sense of relief,” he said. “I think the seniors really feel a sense of accomplishment for everything they’ve been through. … They had to go through quite a bit.”