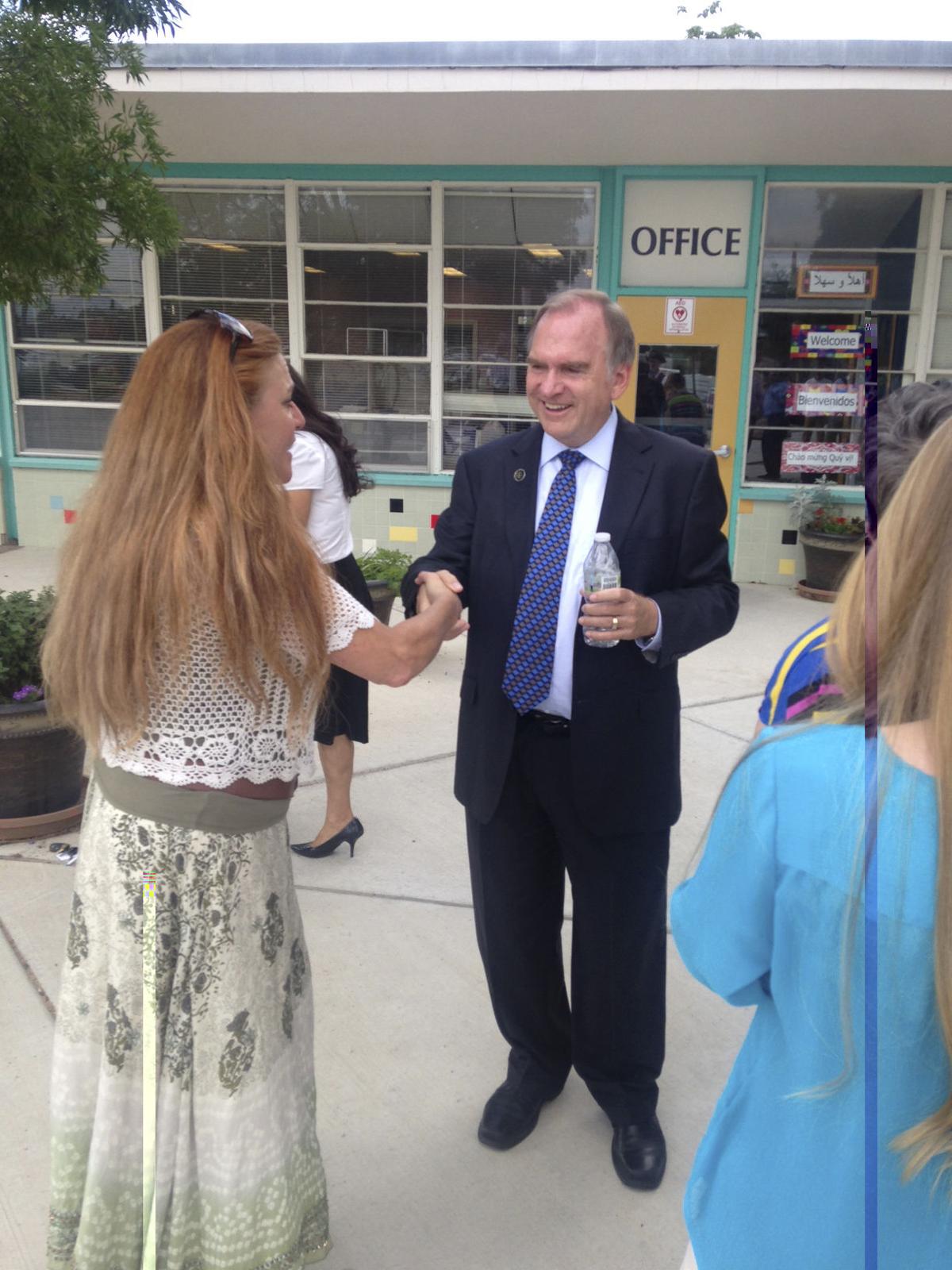 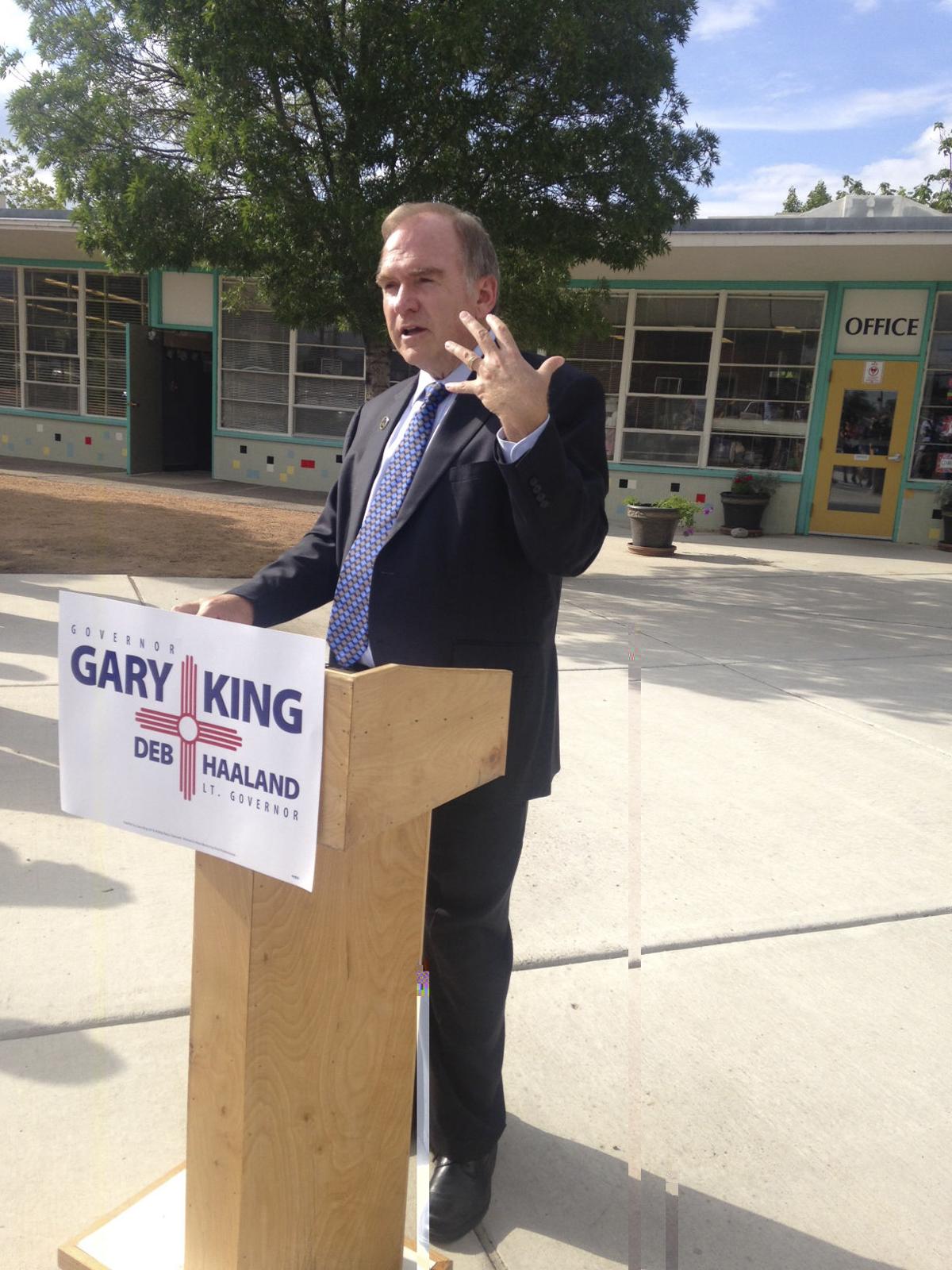 He also wants to fire Hanna Skandera, the head of the state Public Education Department.

Speaking in front of Zia Elementary School in Albuquerque — after the last bell had called all the children inside for their first day of school — King was joined by representatives from teachers unions that have endorsed him over Gov. Susana Martinez in the November election.

A few hours later, Martinez spoke with reporters in Albuquerque following a stint in which she read a big picture book to some first-graders in teacher Rachel Baucom’s class at East San Jose Elementary School. The children told Martinez they like to read because it makes them smarter and that they enjoy books about dinosaurs, sharks, crocodiles and alligators.

The Zia school also is across the street from the American Federation of Teachers offices.

Martinez’s event also drew a few bystanders, some Martinez campaign staff members and a few educators within the school.

King’s education plan clearly puts him at odds with Martinez, who is seeking a second term. He expressed criticism of almost all of her education policies while offering some broad outlines of his own plans to reform education in the state.

“Education is the issue in New Mexico in this campaign,” King said.

Martinez told reporters education will be a dominant theme: “I think everyone will be talking about it.”

Skandera and Martinez have taken heat for implementing hard-to-understand school grading and teacher evaluation systems that remain unpopular with many educators and advocates. Martinez used her executive powers to initiate the teacher evaluations, which heavily rely on student test scores.

King said teachers should not be rated based on test scores, since poverty, hunger and other social factors outside a teacher’s control often influence the results.

“There are no excuses for any child not being able to learn,” she said, citing the success of low-income students in schools in the Gadsden Independent School District.

King said he would commit at least 50 percent of the state general fund to education. About 44 percent of Martinez’s approved budget goes to education, and she said the state is spending more on education than it has in years.

King said he would pull 1.5 percent from the state’s Land Grant Permanent Fund — about $110 million by his estimate — to fund early childhood education programs for every student in the state. Martinez has said she does not want to pull money from that fund for fear of decreasing its future worth.

King said the state should consider forgoing some federal funding if it means reducing the number of federally mandated tests. “We are not in New Mexico bound to do what the federal government wants us to do when it comes to the welfare of the students in our schools.”

Larry Behrens, a spokesman for the Public Education Department, said via email that New Mexico receives more than $400 million in federal education funding every year and that “putting this funding at risk is a bad decision for our students. To our knowledge, there is no state that has ever utilized a partial testing rollback. Such a move would violate state and federal law. Of course we would absolutely lose our waiver from No Child Left Behind and again fall under those rigid requirements, giving the federal government more control.”

King said teachers are supporting him because he listens to their concerns and will work to create a more balanced teacher evaluation system based on classroom observations by educators.

Asked if teachers are bashing her or do not respect her, Martinez said, “No. Absolutely not.” She said every teacher she encountered on a recent visit to the Gadsden School District told her they are on board with her reforms.

King has scheduled nine educational listening events around the state throughout the next month. He will be in Santa Fe on Sept. 15, speaking at the local NEA office on Botulph Road.

Parents have a right to refuse!
http://youtu.be/2ayYajsQjg8

A significant chunk of the funding for New Mexico's schools comes from exploiting our vast natural resources through mining and drilling for oil and gas. Someday, our oil and gas fields will be depleted, our mines will be tapped out, and that steady revenue will dry up. That's the "rainy day" for which our permanent fund was created. Tapping into the permanent fund now reduces the likelihood that it will be sufficient to adequately replace the revenue from depleted natural resources into perpetuity when the time comes.

Gary King is proposing to steal from the children of the future to placate the teacher's unions of today.

I understand that Gov. SM is passionate about education, she's just wrong on going about how to fix our system here in NM. In another article today it is clear that most of the gains are from reforms done in past democratic administrations. You cannot ignore the facts, so why try? There are just enough days until the election for us to get the democratic base to commit to vote, don't keep the status quo because we're too lazy to go vote on Election Day!

The fact is that the Democrats could have gotten rid of Skandera anytime they wanted by just holding a floor vote on her confirmation and collectively voting against her. The same is true if Martinez wins reelection.

The permanent fund is OUR money, money that was made by the resources on our public lands. We are not dragons. We can spend some. Good for King coming up with a plan of action to rescue education in NM! He's got my vote.

The education quagmire is a deep one, and I'm not sure either candidate has offered a politically-acceptable solution to the failures. Test scores simply tell us our system has failed a whole lot of people. The scores don't do Jack to tell us how to solve the problems that created these failures. Do we raise expectations on teachers that the unions will accept? If so, do we raise their salaries? I have scientific techs working for me who make twice what a teacher earns. Do we write binding contracts with parents who promise they will give a damn? Do we worry about kids who lack any sense of scholarly direction or parental guidance? Do we worry about a living wage and broken homes? King is right, of course, but I suspect no one would really accept the strong medicine.

I remain concerned that any real solutions to the education mess we are in will be too painful and too difficult for the pubic to deal with and will range far beyond the DOE. Better to blame teachers and fudge scores. As far as the Education Secretary-Designate? If she can't get confirmation out of the Senate, the Senate ought to have the guts to vote her down. This whole charade where we cannot get an up or down vote reeks of political cowardice by the Donks.

Martinez backers must be pretty nervous about all that Gary King said in this piece, as evidenced by the comments here. It is a FACT that education WILL BE OUR NO. 1 ISSUE. That's because the Skandera-Martinez reforms are not working.

At an APS Board of Education meeting tonight, we learned that the "updated and corrective" summative evaluations -- hinged on TEST SCORES -- are STILL WRONG.

We learned another 20-plus End of Course exams for all matter of subject, from drama to music to art to P.E. and who knows what else -- is being mandated this year.

We know that MILLIONS are being spent on all these mandated tests and the companies that profit from them.

Skandera-Martinez policies will GROW OUR ACHIEVEMENT GAP -- not close it. And I can't wait to be among the Class of 2015 parents who will learn -- or should learn soon -- whether these End of Course exams are the ONE BARRIER to our students received a high school diploma.

What a quandary for Skandera-Martinez: "Raise the Bar" on the end of course exams and 50% of our kids don't earn a diploma and Martinez can't claim success.

OR -- LOWER THE CUT SCORE to a piddly 15 questions out of 50 correct (as has already been done on some of the EOCs) so every kid can get a diploma. But that's not raising the bar, is it???

Oh Please! Education is your #1 issue because its an easy target. King has nothing else to run on as he the WORST A.G. in the nation. He has done NOTHING, ZIP, ZERO, NADA for the state of new mexico during his tenure.
If your strategy is run against Hanna Skandera, don't be surprised when you lose badly. Raiding the states coffers, turning your back on federal funds, and continuing to bend over for teachers unions will surely land you back in the round house....
Voting New Mexicans are not stupid. They know there are more issues facing the state than just poor quality education.

And what has Martinez done for education? For the economy? For behavioral health? NOTHING, ZIP, ZERO, NADA. And I can back up my claims about her failed education policies. I am living them as a mom, a board member, and an advocate of teachers in general (not the union as you claim). Can you back up your claims that Martinez has done anything? Point to anything - and a tortilla making factory doesn't count.

I totally agree Hanna Skandera should be fired, but I'm still voting for Susana Martinez!
Though I'm a Democrat and seen my party causing the disaster our country's in at least Martinez will hold the reigns!

campaign strategy: Whatever susanna does is wrong, I will do the opposite. Get rid of hanna, and spend more money we dont have.

Sure. Lets continue to pour more money into a failing system. Private schools have traditionally spent less per student with better results.

I am not sure if testing and teacher evaluations are the best way to go, but we have to try something other than what the NEA has to offer.

Gary King says he doesn't know who, just who will not serve should send a message that this is the issue of the moment and not much thought has been given to the entire issue.

Again, Not a fan of the Gov. , but we could have done better than King.

"He said the state should consider forgoing some federal funding if it means reducing the number of federally mandated tests." - So instead of getting free money from the feds for simply complying with their testing rules, Gary King wants to raid the permanent fund, stealing from the children of the future to make today's teacher's unions happy?