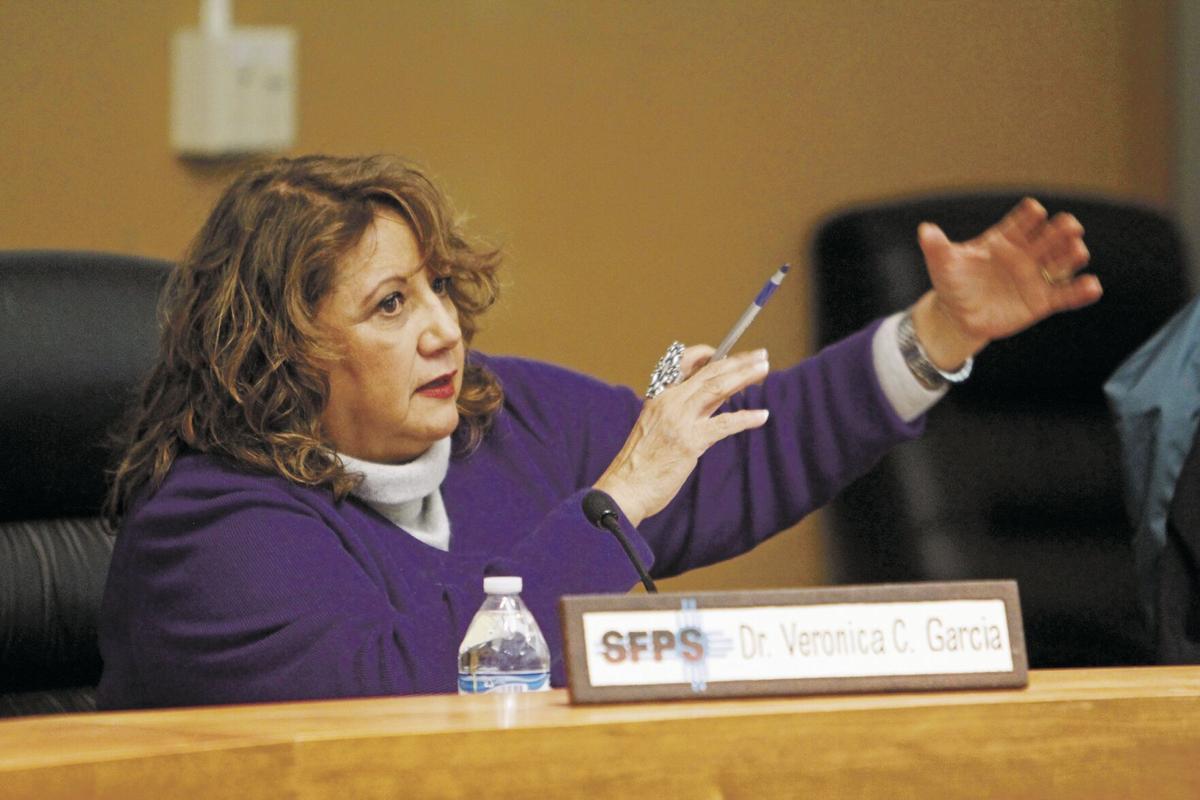 Santa Fe Public Schools Superintendent Veronica García speaks at a school board meeting in 2018. ‘It’s the pressure [of the pandemic] — these are high-stakes decision-making we’re talking about,’ said García, in explaining her decision to retire this year. 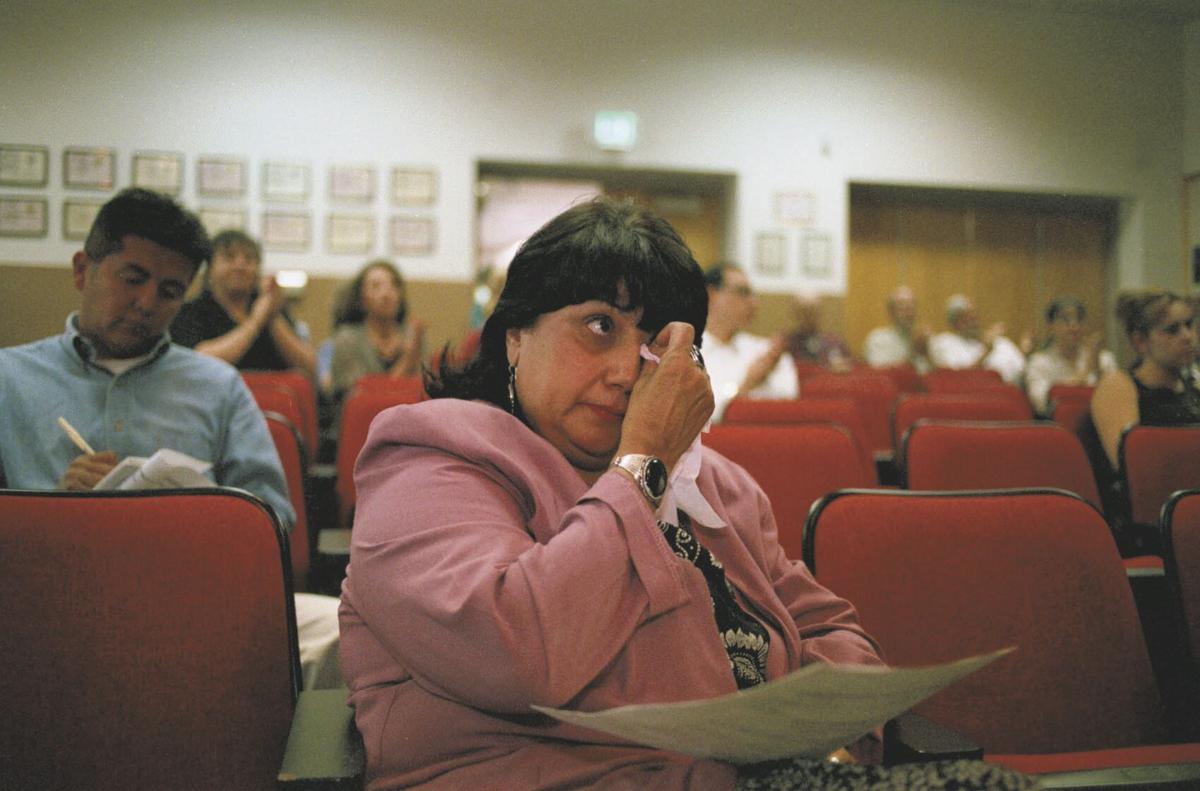 Santa Fe Public Schools Superintendent Veronica García tears up during a 2001 news conference at which her first retirement was announced. 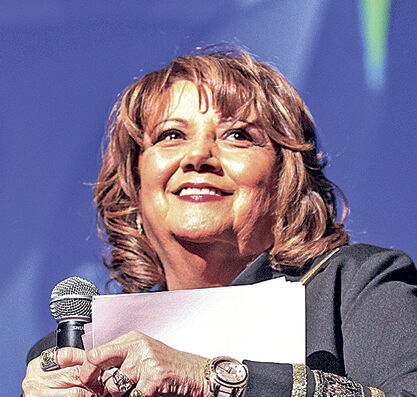 Santa Fe Public Schools Superintendent Veronica García speaks at a school board meeting in 2018. ‘It’s the pressure [of the pandemic] — these are high-stakes decision-making we’re talking about,’ said García, in explaining her decision to retire this year.

Santa Fe Public Schools Superintendent Veronica García tears up during a 2001 news conference at which her first retirement was announced.

Santa Fe Public Schools Superintendent Veronica García, citing the grinding pressure of the pandemic and its implications for the district’s 13,000 students, announced her retirement Monday.

The move, which stunned many in the district, takes effect June 30. It concludes García’s five-year run as superintendent in her second stint in the job. She led the district in the early part of the century before becoming the state’s Public Education Department secretary in the Richardson administration. In all, she has spent 48 years in public education.

But the most recent year was unlike any other, and García, 70, acknowledged the difficulties in navigating the pandemic as she helped the district pioneer a distance-learning model when the COVID-19 pandemic shut down in-person learning for much of the past year.

“It’s the pressure — these are high-stakes decision-making we’re talking about,” said García, who estimated she was working between 70 and 90 hours a week. “We’re talking about our students’ education and their health.”

The Board of Education had offered Garcia a contract extension that would take her through the 2022-23 school year.

Garcia was named interim superintendent in 2016, replacing Joel Boyd, and later accepted the job on a permanent basis.

García described her leadership style as “working from the head and the heart,” but her decisions sometimes came from more the heart, said Santa Fe Board of Education President Kate Noble.

“School and education — raising children and shaping them — has got to be heart driven,” Noble said. “She knows that, but then there’s her competence as an administrator and an educator, and her deep knowledge and savvy with the things that deal with education.”

During her second tenure, García oversaw a rise in four-year graduation rates, from a low of 67 percent for the class of 2015, the year before she arrived, to 86.3 percent for the 2019-20 school year.

She also testified in the landmark Yazzie-Martinez education lawsuit, which determined the state was failing to provide an adequate education for many of its at-risk students.

Stan Rounds, executive director of the New Mexico Coalition of Educational Leaders and former superintendent of Las Cruces Public Schools, said García’s decision to speak out on such a divisive topic demonstrated her desire to put students’ needs at the forefront.

“It speaks more to her wide range of real understanding of the complexities of issues and it put her in a key leadership role,” Rounds said, “And not just in the Yazzie-Martinez court case but also in the design work to find the best way to go [find solutions] for children.”

Grace Mayer, an art teacher at Milagro Middle School and president of the National Education Association-Santa Fe, said García also advocated for educators, especially when it came to the pandemic. García worked with the union to iron out agreements that allowed teachers to volunteer to return to the classroom when the state allowed districts to start hybrid-learning models in the fall and in February.

The district and union also negotiated to allow teachers who were at risk of suffering complications from COVID-19 to receive accommodations to teach remotely when in-class instruction resumed. More than 300 teachers and staff members have received such accommodations.

“She knows what our nutritionists, our bus drivers and our [educational assistants] do, and she applauds their work on all levels,” Mayer said.

García also guided the district’s response to the COVID-19 pandemic as SFPS moved quickly into remote learning. She said voters renewing a property tax-funded Education Technology Note helped pave the way. The revenue generated from its passage allowed the district to purchase take-home laptops and tablets for all students, complete wireless upgrades and beef up other technological support — all of which became crucial when campuses closed.

“She is a visionary. She moved this district forward,” Gonzales said.

García said she wants to continue to be an education advocate, and she envisions doing some public speaking or consulting for school districts. She added it was time for work to take a back seat for a little while.

“I am open to the possibilities at this particular stage,” García said. “But I do need a lot more balance in my life and I need to cut out some of the stress.”

The board will hold a special meeting at 4:30 p.m. Thursday to discuss the upcoming vacancy.

When is it the proper way of spelling her name, with the accent above the "i", is missing from many places in the article?

I have followed veteran educator/champion of early childhood for decades and think she is the cat’s meow. I am so proud of her achievements, thanks to her keen knowledge of the profession. Santa Fe is lucky to have had her for as long as they did.