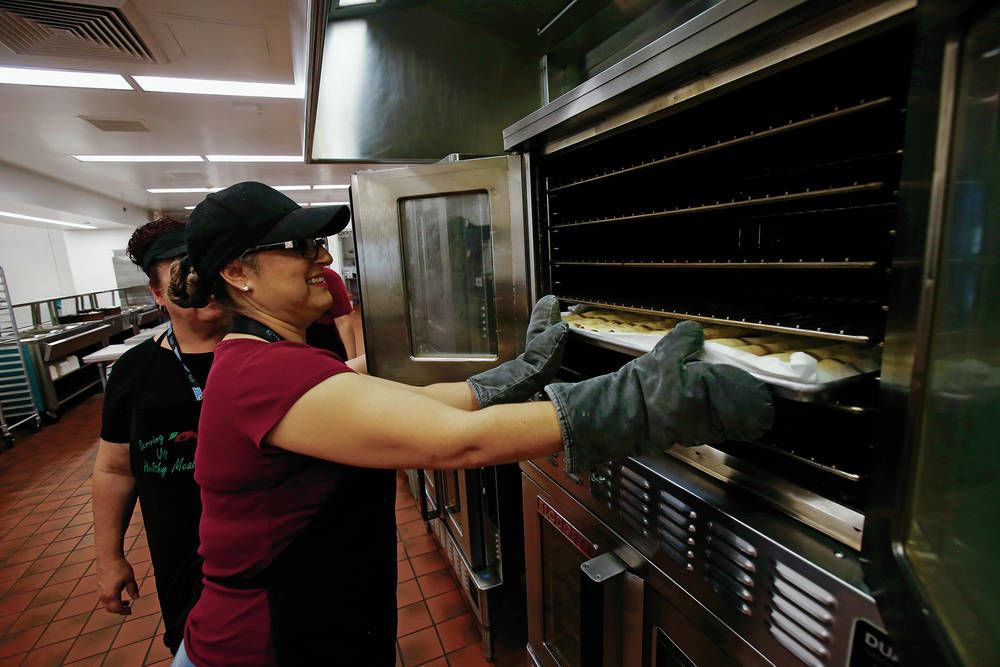 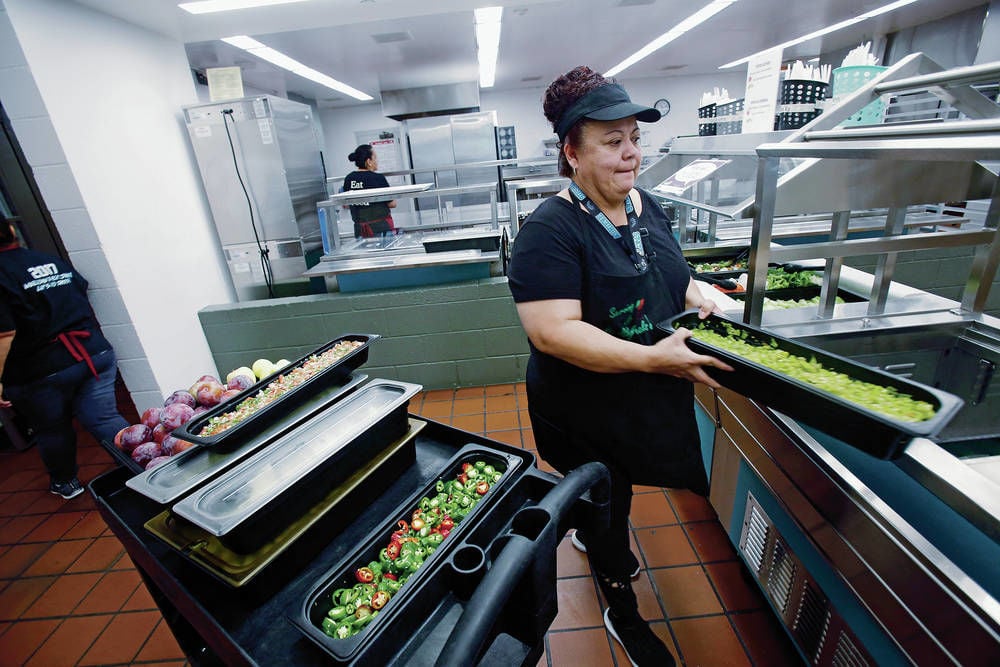 Barbara Lopez, cafeteria manager at Capital High School, puts the New Mexico green chili in the lunch line before the start of the lunch hour on Thursday, October 3, 2019. The Capital cafeteria feeds about 1200 students in total with almost all locally grown food. The only items not locally sourced are the french fries, pizzas and the ranch dressing, said Lopez. "Other than that everything is local." Luis Sánchez Saturno/The New Mexican 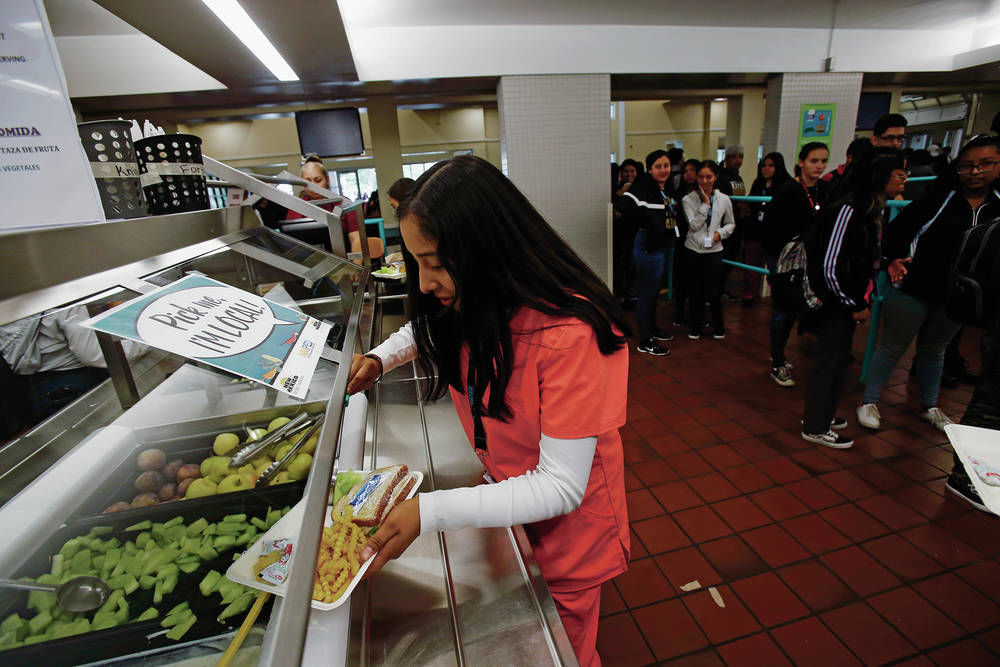 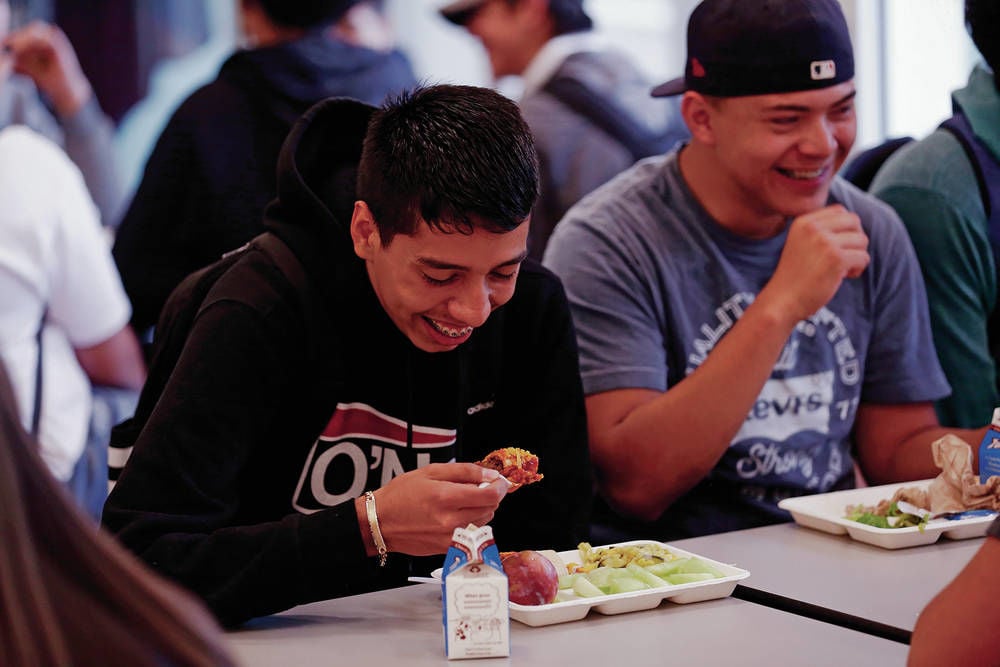 Barbara Lopez, cafeteria manager at Capital High School, puts the New Mexico green chili in the lunch line before the start of the lunch hour on Thursday, October 3, 2019. The Capital cafeteria feeds about 1200 students in total with almost all locally grown food. The only items not locally sourced are the french fries, pizzas and the ranch dressing, said Lopez. "Other than that everything is local." Luis Sánchez Saturno/The New Mexican

Barbara Barela grabbed the last burrito on the tray and smothered it with red chile for another hungry student. Her staff had made 325, but the Capital High School lunch rush left her wishing they had made closer to 400.

“I didn’t know the burritos would be this popular,” the cafeteria manager said while inspecting the salad bar.

“We need more fruit,” she yelled to nobody in particular.

In the busiest kitchen in Santa Fe, Barela said her 12-person staff cranks out 500 breakfasts and 1,000 lunches each day. On Thursday, they served beef burritos as well as calabacitas, green salads, pears and apples that were entirely sourced from local New Mexico ranchers and farmers, except for the lettuce.

“Yes, it was too bad couldn’t find local lettuce,” said Betsy Cull, director of student nutrition for Santa Fe Public Schools. “But that’s what happens when you work with farmers. It depends on the weather. You can have a weird season.”

At Capital and across the state last week, school cafeterias celebrated their partnerships with local farmers during New Mexico Grown Week. Farmington schools served up potatoes grown on the Navajo Nation, while schools in Taos ground blue corn into atole. Kids in Santa Fe Public Schools ate sunflower shoots and those in Albuquerque schools carved watermelons.

Everywhere, schools offered apples from Northern New Mexico and peppers from down south.

In addition to connecting students with the lands where they’re growing up, farm-to-school programs are designed to fight an epidemic of overweight and obese children by improving nutrition — all while providing local farmers with a steady source of income.

“I nerd out on school food being an intervention strategy to change the world. It’s this weird place where everything comes together,” said Kendal Chavez, the farm-to-school specialist with the New Mexico Public Education Department. “Healthy meals help students perform better in schools and live healthier lives. And with consistent, year-round purchases for farmers, my hope is we could bring back and support family orchards and farms all around the state.”

This school year, the Public Education Department’s farm-to-school program, started in 2014, gave out $450,000 in grants to 58 school districts, nine of which used the money to partner with a local farmer for the first time.

Cull said Santa Fe Public Schools, which currently partners with eight local farmers to buy a quarter of its produce, used up its $22,500 grant in the first six weeks of the school year. The district has a food budget of around $2.5 million to serve around 2,700 breakfasts and 8,000 lunches per day, she said.

All around New Mexico, school districts are the largest food service in town and provide reliable income for farmers.

“It’s huge for farmers. If you can figure out what you can supply a school with and focus on that and get good at being consistent, then you’re not having to worry about putting everything in coolers, driving to a farmers market, and setting up your stand,” said farmer Ralph Vigil. He sells around $500 worth of produce grown on his 4.5-acre organic farm in Pecos to the Pecos and West Las Vegas school districts each week.

“Farmers want to be in the field growing,” he added. “So if it’s already sold and I have a place to take it, I can focus on having my hands in the soil.”

Sometime in the last decade, Vigil said, a general store with fresh produce in Pecos closed and gave way to a Dollar General.

State Department of Health officials said farm-to-school programs could be the only way for many of the state’s public school students to access fresh produce.

“Research has shown that people who have access to healthy food choices use them. When you don’t have a lot of choice around you — well, then you eat whatever is available,” said Rita Condon, manager of the Department of Health’s Obesity, Nutrition and Physical Activity Program.

“In some rural communities, there are only convenience stores. And they sell soda and candy — not healthy options,” she said.

Condon said her program is focused on combining community institutions to make the healthy choice of food the easy choice.

In recent years, it has seen success in the form of community gardens and walking paths, cooking classes at the Food Bank of Eastern New Mexico in Clovis, and new farmers markets in Santa Rosa and Grants.

“I always tell my staff you have to love what you do to cook. And it’s much easier to love cooking when you have fresh ingredients,” Barela said while serving up burritos.

“You’ve got to have amor in your food to serve good food.”

Celebrate cooler days with a smothered delight: Biscuits and gravy