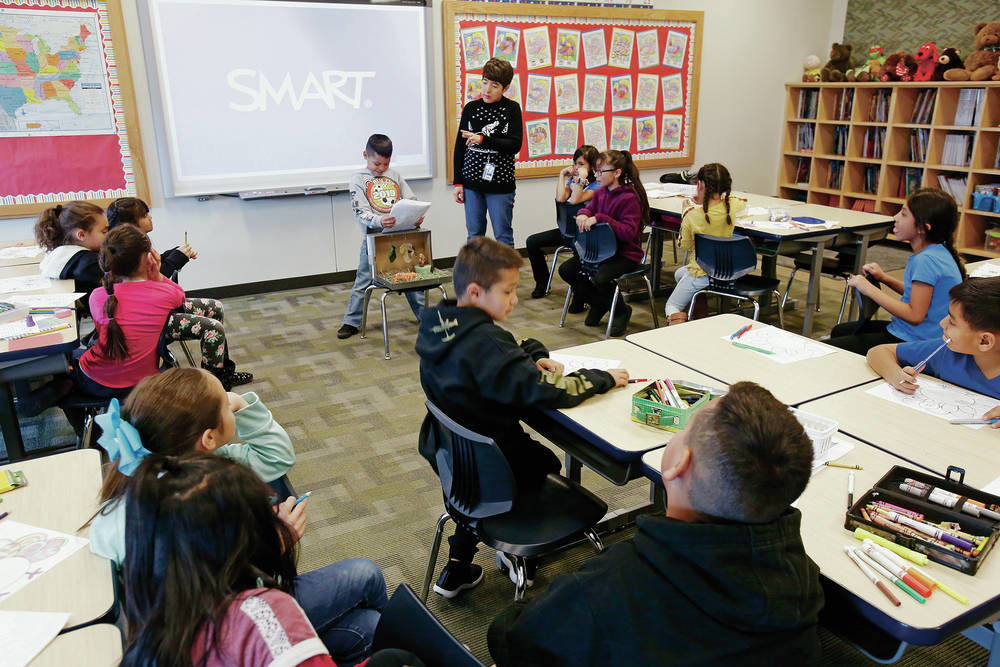 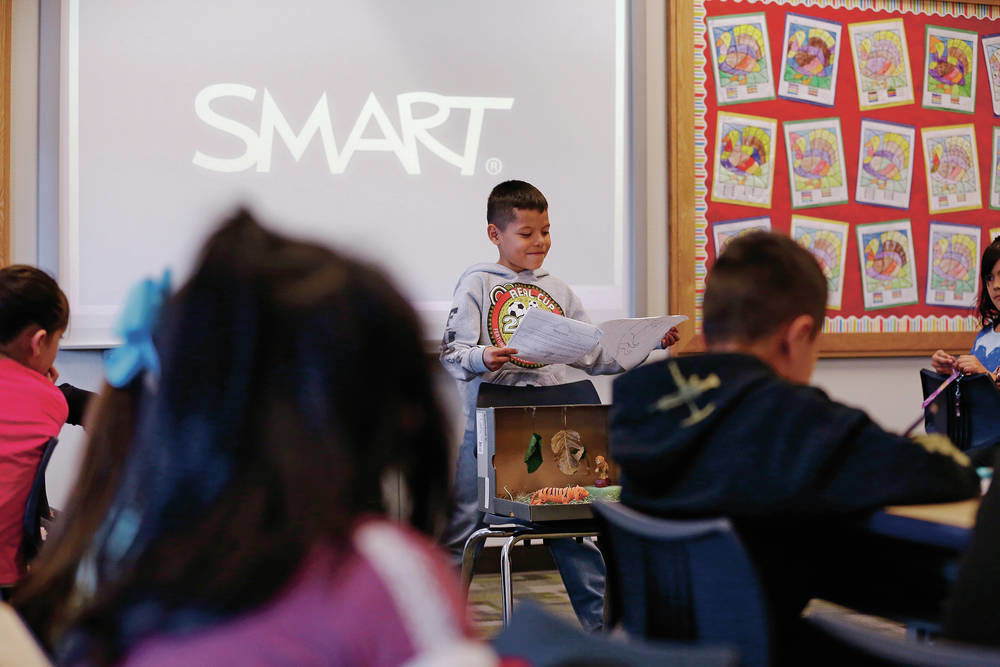 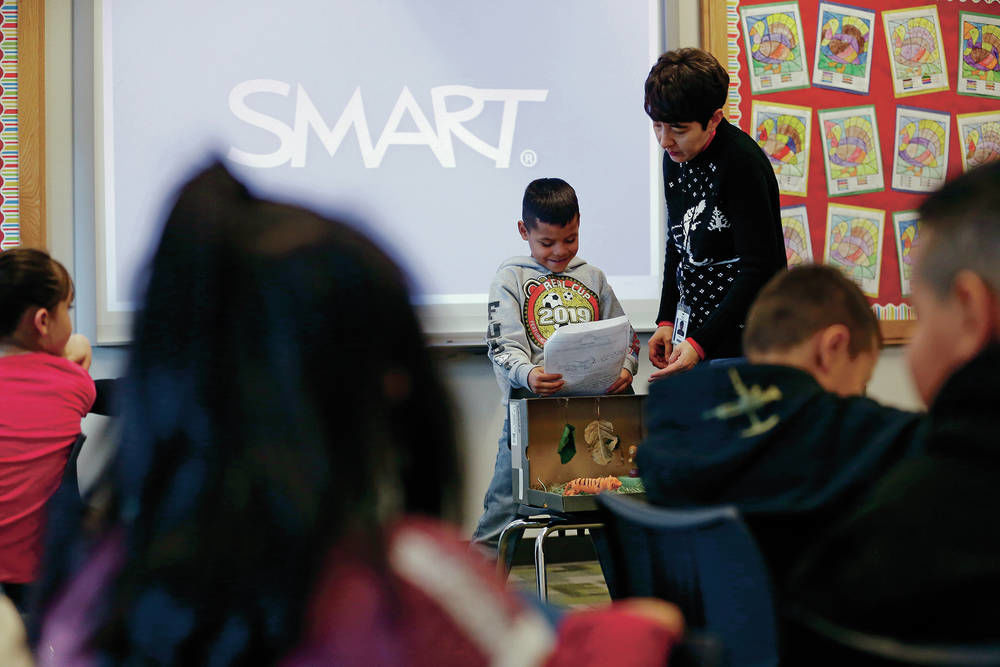 That’s because the school’s dual-language immersion curriculum teaches math, reading and other subjects in both languages.

The landmark Yazzie/Martinez v. State of New Mexico lawsuit ordered the state to direct more resources to public schools. Part of that mandate calls for culturally relevant curriculum and more support for students learning English as a second language. Teachers and administrators at El Camino Real say the school’s dual-language curriculum accomplishes both.

“I believe learning in both languages helps engage every student in the classroom in a way sticking to one language does not,” said Marquita Montaño, a dual-language reading interventionist at El Camino Real who works with students who are new to the United States.

At El Camino Real, 80 percent of kindergarten, 70 percent of first grade and 60 percent of second grade are taught in Spanish, while instruction in third through eighth grade is split evenly between the languages.

The school had the highest rate of English language learners in Santa Fe Public Schools last year at 54 percent. And with more than 800 students, it’s the largest non-high school in the district. Every El Camino Real student qualifies for free or reduced-priced lunch, which is determined by federal poverty levels.

Principal Jack Lain said the hardest part of operating the school, which opened in 2014, is hiring teachers. He has turned to Spain and Mexico to fill vacancies.

“This isn’t a maintenance program set up for Spanish speakers to transition to English. We’re a dual-language school striving to create bilaterally,” Lain said. “And even though you hear larger schools don’t have community, I think that the dual-language program creates community because we’re actively knocking down the language barrier that can be a barrier to community.”

According to the Public Education Department, six of New Mexico’s 89 school districts offer bilingual multicultural education programs in a Native American language — either Keres, Navajo or Tewa. All those programs follow the enrichment or heritage model, and four districts have a bilingual Native language program at more than one school.

Pauletta White, assistant superintendent for student support services in Gallup-McKinley County Schools, said the district has at least one Navajo language teacher at every elementary school except for Ramah Elementary, which offers Zuni.

From kindergarten through second grade, parents have the option to enroll their child in the Native language class. Native American language programs require approval from tribal councils or from other appropriate tribal entities.

Some schools have more than one teacher and can offer Native language classes to more grades.

But White said teachers, who must be certified by both the Public Education Department and the Navajo Nation, are hard to find.

Beyond finding qualified teachers, White said the state’s funding model for Native languages, which is based on yearly grants through the Bilingual Multicultural Education Act, prevents long-term planning.

In 2018-19, White said the district received $866,000 to support its Native languages programs compared to $767,000 this school year, almost all of which goes toward salaries.

“This seems to me to be directly against what Yazzie/Martinez ordered the state to do,” White said. “If the state really wants to be equitable as far as teaching languages, we shouldn’t rely on grants that come and go and change every year.”

In previous years, the Navajo language classes were taught after school. But Nguyen said they are included in the normal schedule this school year to accommodate more students.

“In terms of expanding our Native language program to younger grades, the challenge is we have students from many pueblo nations spread across the district. So it would be difficult to maximize resources and ensure equitable access to those programs for all students,” Nguyen said. “It’s an issue of taking the funding you have and finding that balance to meet everybody’s needs.”

While Spanish and Native languages have different functions in modern New Mexico, educators agree that the languages can serve a common purpose in the classroom.

“I think you hear people say that Spanish is the practical language while learning Native languages is more about preservation,” said Lain, who worked for five years in the Zuni Public School District before becoming principal of El Camino Real.

“But really for me, any dual-language program in any language can be used as a way to engage students better than English does on its own.”

Research has shown that being bilingual or multilingual is good for our brains. I have long thought that, with so many Native speakers of many languages, New Mexico could aspire to having all high school graduates be functionally bilingual. One of the challenges in education now is that we are not rewarding creativity as much as we could. Languages describe the world in different ways, provide alternate perspectives, and make reframing and intentional communication more automatic. Because Native speakers could be engaged for conversational classes, I think we could achieve this more efficiently than most states and we might just love the outcome.