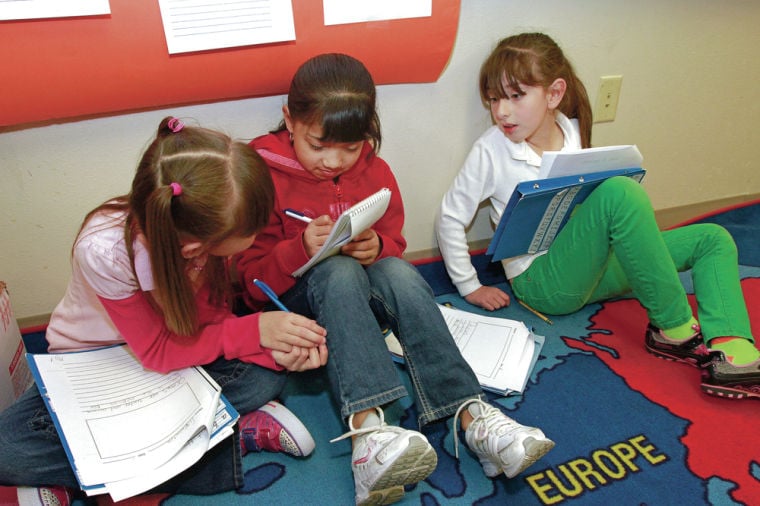 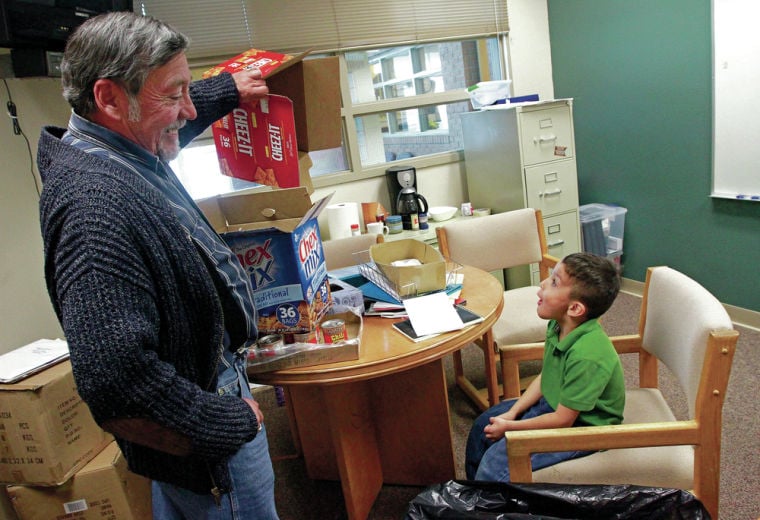 Parent liason Antonio Gonzales spends some time with Ernest Tafoya, 5, as he packs up his office at Ramirez Thomas Elementary School on Thursday. Gonzales is losing his position at the school, due to federal funding cuts. The school was giving funding for extra help for three years to help it improve student test scores, but now three of those positions are being eliminated. Jane Phillips/The New Mexican 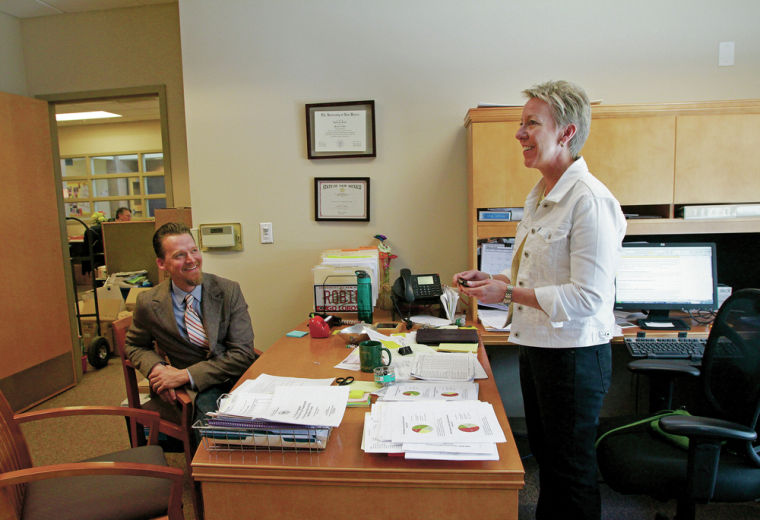 Ramirez Thomas Elementary School Dean of Students Scott Blanchard, speaking with Principal Robin Noble in her office on Thursday, will lose his position because federal funding for the job has run out. Jane Phillips/The New Mexican

Parent liason Antonio Gonzales spends some time with Ernest Tafoya, 5, as he packs up his office at Ramirez Thomas Elementary School on Thursday. Gonzales is losing his position at the school, due to federal funding cuts. The school was giving funding for extra help for three years to help it improve student test scores, but now three of those positions are being eliminated. Jane Phillips/The New Mexican

Ramirez Thomas Elementary School Dean of Students Scott Blanchard, speaking with Principal Robin Noble in her office on Thursday, will lose his position because federal funding for the job has run out. Jane Phillips/The New Mexican

Tim Abeyta called his time at Ramirez Thomas Elementary School “the best three years of teaching I have ever experienced.”

Abeyta, who teaches fifth grade, was hired just as the failing school was beginning a federally mandated “turnaround.” It has received $1.25 million in School Improvement Grants over each of the last three years to improve student performance.

The money was used to extend the school day by an hour, hire a parent liaison, a dean of students and a second learning coach for teachers, and to provide expanded teacher-training opportunities.

The New Mexico Public Education Department gave Ramirez Thomas an F in 2012 under the state’s new A-F grading system. But when the state updated those grades over the summer of 2012, it raised the school’s grade from an F to a C, making Ramirez Thomas one of the few in the district to jump up by at least two grade levels.

Teachers like Abeyta are convinced that both teachers and students at Ramirez Thomas benefited from the turnaround model. “I feel like the professional development we got, the extra learning time for students, the staff development and camaraderie we built within our teams and within our staff has helped me as a teacher,” he said recently. “And I feel I can still learn more.”

But now the extra funding is ending. So are the chances for staff to travel to reading and writing workshops at places like Columbia University in New York City. Time in class will be shorter by an hour. Parent liaison Antonio Gonzales and Dean of Students Scott Blanchard are leaving.

Principal Robin Noble said she will find ways to maintain professional-development opportunities, and she is optimistic that the school will continue its upward swing.

Many within the school credit Noble with leading much of the turnaround by using the federal funding to turn the school into a community center — where parents not only feel welcome but also play an integral role in their children’s academic success, where instructors collaborate on best learning practices for reading, writing and math, and where teachers enjoy the art of teaching.

“I don’t think you can change people’s passion for learning and teaching just because you don’t have the money,” said teacher Peggy Brewer, a 36-year teaching veteran who has spent the last four years at Ramirez Thomas, running a bilingual reading class. She said 71 percent of her students tested at their grade level in English last year, and the other 29 percent made “significant growth.”

Ramirez Thomas is one of the district’s newer schools. Named for former school board member Belina Ramirez and longtime Larragoite Elementary teacher Anita Gonzales Thomas, the school opened in 2003 on Santa Fe’s southwest side. Nearly all of its 460 students in kindergarten through fifth grade currently qualify for free or reduced price lunches, an indicator of high levels of poverty among the school’s students. In its first two years, Ramirez Thomas met Adequate Yearly Progress standards under the federal No Child Left Behind Act. But then it began falling behind. In 2010, Ramirez Thomas was the ninth lowest achieving school in New Mexico and ranked at the bottom among Santa Fe public schools.

Ramirez Thomas is one of nine New Mexico public schools to receive a total of about $11.3 million in federal grants to turn things around. Those schools were given four options:

• They could close and transfer students to better performing schools.

• They could become a charter school or be taken over by an education-management group.

• They could totally transform. The most popular choice for struggling schools nationwide, this option required them to replace their principal, start a new teacher-evaluation system, provide professional-development opportunities and create new support services for students.

• The fourth option — the “turnaround” model — was what the district chose for Ramirez Thomas. This option includes many components of the transformation model, with a few added requirements. Teachers had to reapply for their jobs, and the school had to replace at least 50 percent of them before moving forward. In addition, any principal of a turnaround school who had been on the job more than two years had to go.

Noble had taken over Ramirez Thomas just one year before the district chose the turnaround approach, so she wasn’t replaced. But half the school’s staff members were fired.

A federal report suggests that two-thirds of the nation’s schools using the turnaround model have made considerable gains. But the research is limited.

When the turnaround began at Ramirez Thomas, Noble started a Thursday morning coffee meeting for interested parents to visit with one another and get involved in school activities. Last Thursday, about a dozen mothers and one father — most of whom speak Spanish — sat around discussing the future of the school.

Some felt that it was Noble and the staff, and not the federal money, that has made the difference in the school’s renewed reputation. Other acknowledged that the grant money allowed the district to put the right teachers in place to give the school a shot at success. Almost all said their children have been doing better in reading and math over the past three years, with one proud mother noting that her kindergartner daughter is already reading and writing in both Spanish and English.

Maricela Gomez said she is worried about the long-terms effects of the loss of the additional money. “I’m happy with the way my kids are doing, but I want my grandchildren to receive the same quality of education that my children get,” she said.

Parental liaison Antonio Gonzales spent much of Thursday packing up his office. He said he likes to think that his job “gave parents the sense that no matter what language they speak, they have a voice in this school.” The parents, he said, “are aware that all good things come to an end.”

Noble said school counselor K.C. Dutcher, who speaks Spanish and English, will bridge some of the gap that Gonzales’ absence will create.

Dutcher said he is optimistic the school will stay on course, despite the loss of money, learning time and personnel: “We are going to lose instructional time. We know that. We are going to lose funding. We know that. But the things that will carry over are the professionalism and dedication and morale of the teachers and staff, and all the professional learning that has happened here over the last three years. Those are foundational elements that we can take with us even if the money is not here.”

He said Noble, and not the money, may prove to be the determining factor in the school’s future. “I do not know how it would work if she were not here anymore — she is the glue that holds everything together,” he said.

“It’s not over,” Noble said. “Our commitment to the students at all levels doesn’t end because the grant money ends.We’ve been good stewards of the [federal] money. We utilized national professional development opportunities, established a [reading, writing and math] curriculum, and built a school culture that is committed to changing the lives of our students and their parents. It’s their school. They own it.”

“The school has continuity now,” Blanchard said. “It will have that continuity after the money goes and people leave. Nobody is going to be here forever, but it’s the culture that will carry the school forward.”

Over the past three years, the Public Education Department has overseen the school’s progress, Noble said. On June 6, she will take part in a final meeting with the U.S. Department of Education’s Office of School Turnaround to review its accomplishments and discuss how to sustain them.