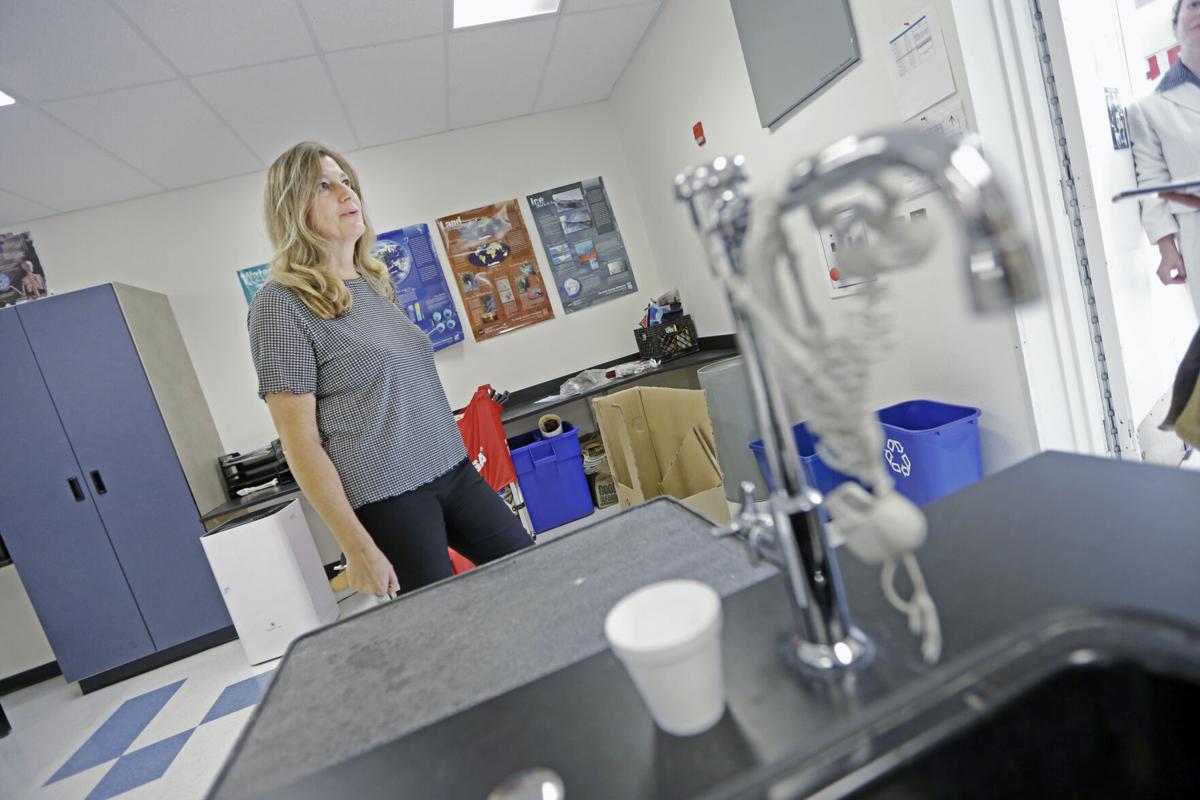 Desert Sage Academy Principal Alice Braden walks through one of the school’s science rooms on Thursday. In it’s second year, the school will offer multilayered online learning, and Santa Fe Public Schools is betting its programming will appeal to a wide range of students and parents. 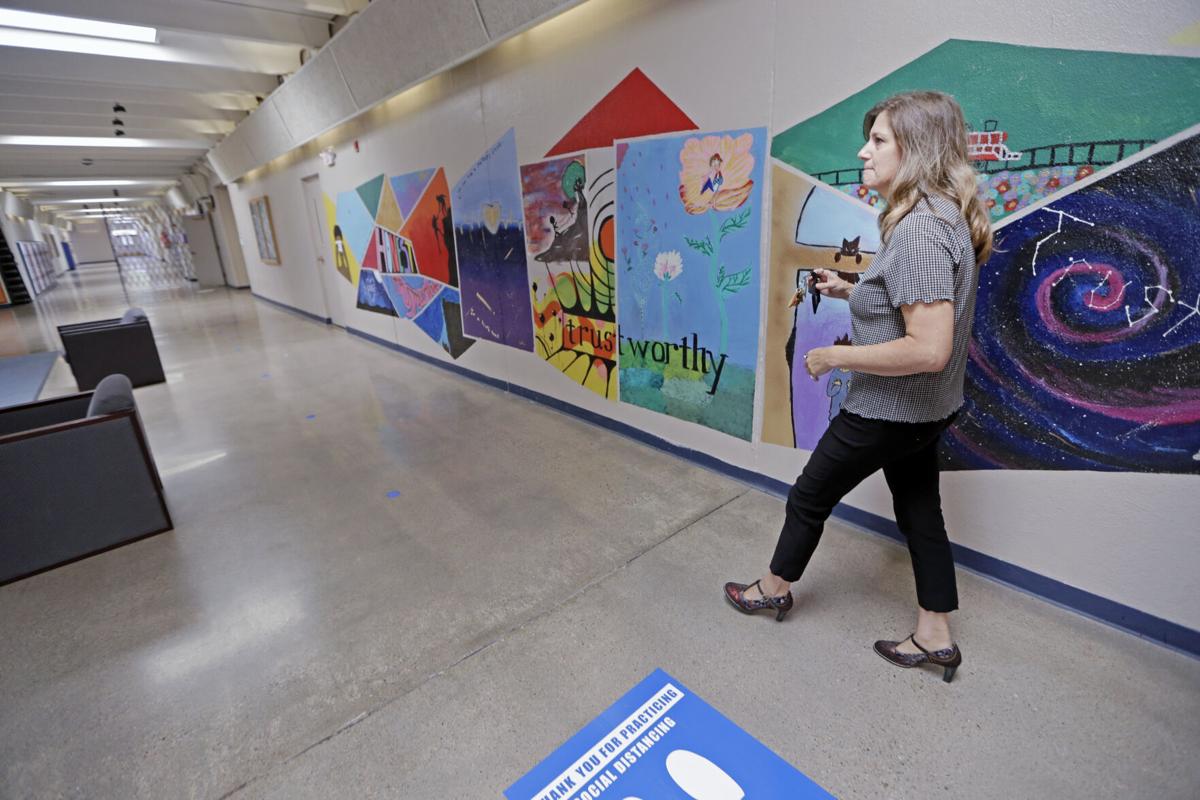 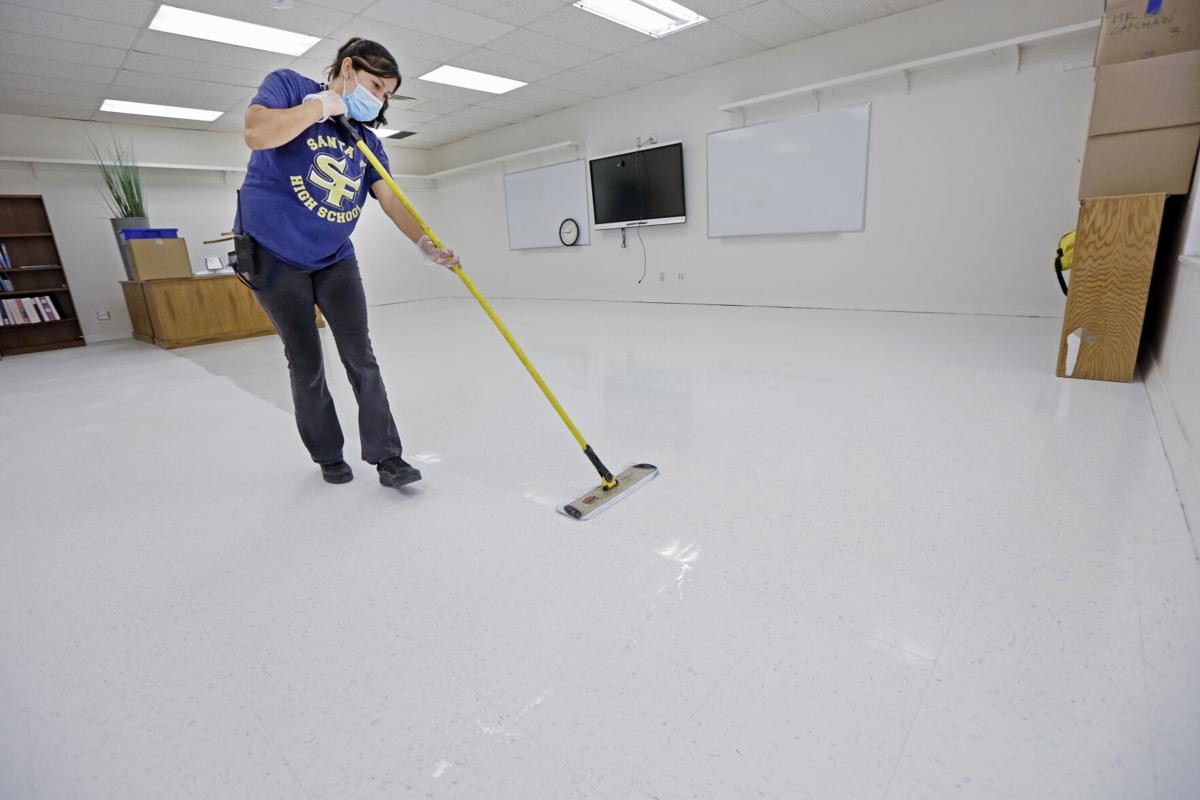 Freida Nevarez, with Maintenance Service Systems, waxes the floor of one of the classrooms at Desert Sage Academy on Thursday. 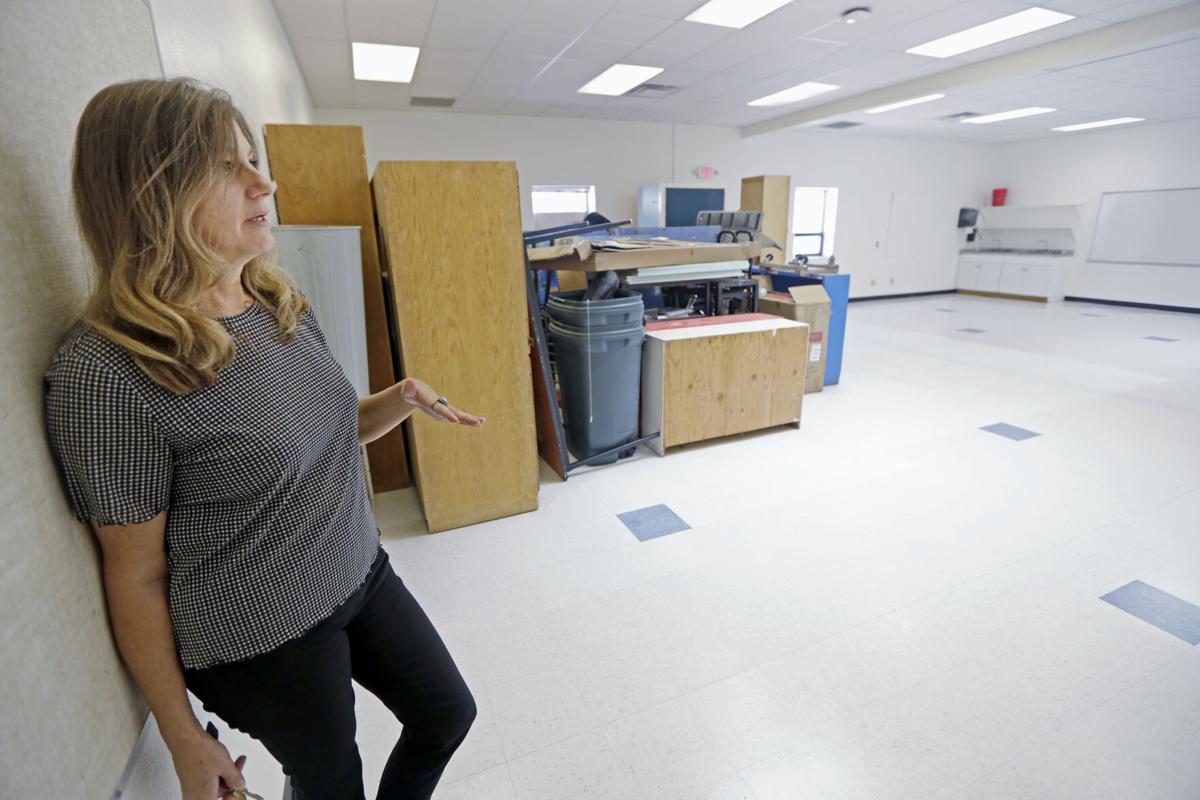 Desert Sage Academy Principal Alice Braden on Thursday checks out a room that will house a maker lab. 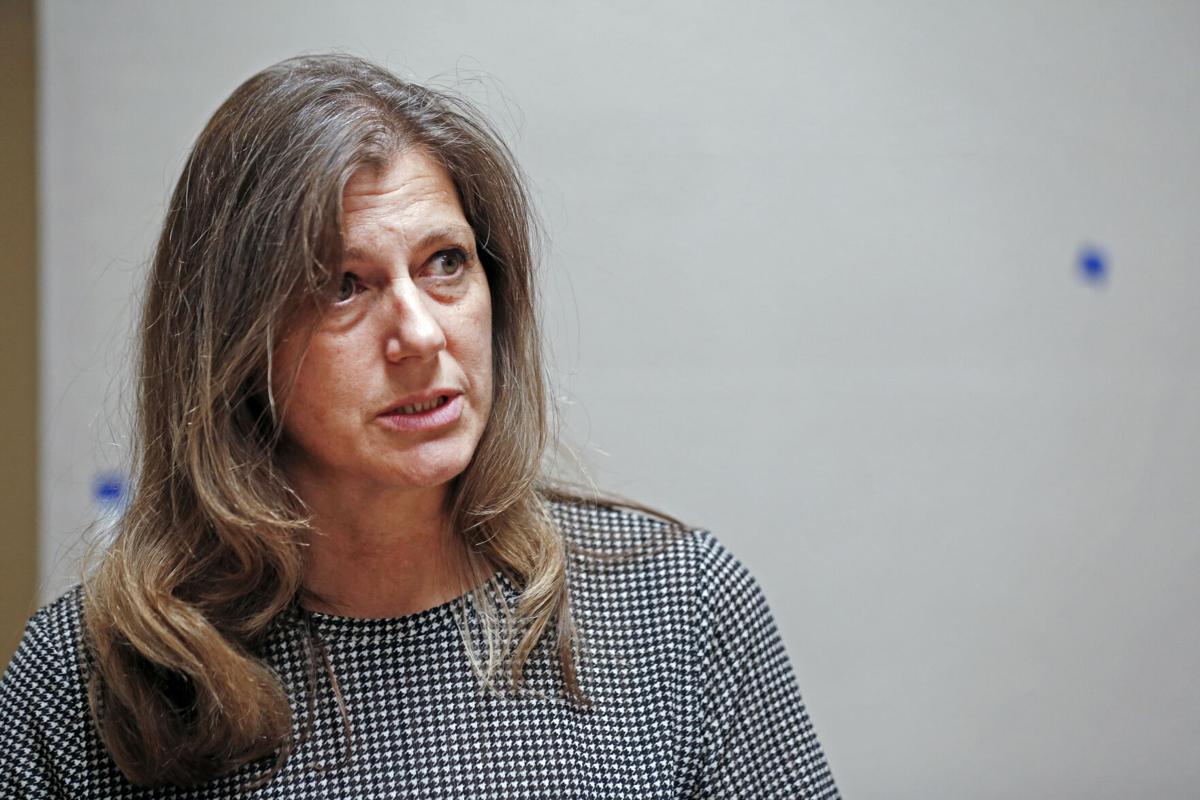 Desert Sage Academy Principal Alice Braden walks through one of the school’s science rooms on Thursday. In it’s second year, the school will offer multilayered online learning, and Santa Fe Public Schools is betting its programming will appeal to a wide range of students and parents.

Freida Nevarez, with Maintenance Service Systems, waxes the floor of one of the classrooms at Desert Sage Academy on Thursday.

Desert Sage Academy Principal Alice Braden on Thursday checks out a room that will house a maker lab.

It’s a Thursday in late July, and the halls of Desert Sage Academy are quiet as Principal Alice Braden prepares for the opening of school.

Braden’s incoming pupils — guided by a crew of fewer than a dozen teachers and support staff — will include all ages. Some will be in the building; others at home. Some may have an interest in computer science or robotics; others have jobs in addition to their schoolwork.

Still others are attending Desert Sage because it will offer multilayered online learning — a much better option than dropping out.

Santa Fe Public Schools is betting Desert Sage could be the hit of the 2021-22 school year, which begins Friday, because its varied programming will appeal to a wide range of students of all ages and parents with varying concerns.

Administrators say staffing at the school is flexible and could accommodate growing interest this year.

And interest is likely to grow because Desert Sage is the only online option for district students at all grade levels as concerns rise over the highly contagious delta variant of the coronavirus.

That doesn’t sit well for some parents. In order to attend the online academy, students must withdraw from their current school. Some would lose interzone transfers in the process.

Other parents fear their kids would be too isolated if they attended Desert Sage; they wish all schools in the district would offer an online option.

“They need social interaction with peers they know and have relationships with,” one parent wrote in a public comment to district administrators during a virtual town hall Tuesday night. “Not to be exiled from their school because they want to be safe and sent to another school.”

As of last week, there were 152 new applications from students hoping to attend Desert Sage, and 96 students had registered, including those returning from last year.

Braden noted that when the Academy at Larragoite was rebranded as Desert Sage in 2020-21 — envisioned as a computer science magnet school for secondary students — it enrolled nearly 40.

Still, it’s not a school for everyone, she said. “There has to be a reason why you’re choosing to go online, especially in the upper grades.”

Starting this year, Desert Sage will offer online-only learning for children in kindergarten to fifth grade. Those students will work with teachers on the same districtwide curriculum they would see if they attended in person at another school.

Sixth graders may continue the online-only curriculum, but they’ll also have an option to attend some lessons on campus while following an online program called Edgenuity and engaging in project-based learning. They will be graded on a combination of the two.

Students in grades 7-12 may choose between learning online from home through Edgenuity or learning both in person and online, a mix educators call blended learning.

Edgenuity, developed by a tech company based in Scottsdale, Ariz., is the same program students at Santa Fe Public Schools use to catch up on credits during summer school.

Earlier this year, NBC News reported the online platform has faced parent backlash. Throughout the pandemic, it has drawn protests from families across the U.S. over a curriculum they contend is impersonal and flawed.

Proponents argue, however, the Edgenuity curriculum is best in a blended classroom — where in-person learning and online coursework coexist.

“I think online learning is for some students and not for others,” Braden said.

Though it hasn’t been around long, Desert Sage has worked for some: Lestat Arnold, 18, was part of the school’s first graduating class. After moving to Santa Fe from Las Cruces for his senior year, he said he opted for Desert Sage because he needed only a handful of credits to graduate.

“I had applied to go to Santa Fe [High School],” he said. “But then my mom actually applied me for Desert Sage because it seemed like a better fit. Or at least, like, a little bit easier to manage compared to what Santa Fe High was going to be like. Plus, Santa Fe High wanted to make me take a couple of classes I didn’t need.”

He spoke on the phone amid the clang of dishware at his new job at Joseph’s Culinary Pub, where he works as a prep chef. It’s a gig a teacher at Desert Sage helped him secure, he said. He’s looking into attending a college culinary arts program in Doña Ana County next year.

Arnold said he felt teachers gave him flexibility as he navigated his final year while managing mental health issues. Before he arrived, he said, he would have described his high school transcripts as “terrible” as he struggled to manage a mood disorder.

But he left the school feeling better about his grades and said he intends to return to coach esports at Desert Sage, located at what once was Capshaw Middle School. The video game-driven club will be one of the school’s activity offerings.

District officials say that while Desert Sage came of age during the pandemic, it’s here to stay. But the concept is catching on, with other forms of remote learning taking root statewide.

Last week, the Public Education Department announced the launch of a new “consortium” of public school districts and charter schools offering online courses for students anywhere in the state.

Several school districts and charters are providing online courses to students in other districts, including Cuba, Tucumcari, San Jon and Carlsbad.

The purpose is to leave students enrolled in their original school districts, which will pay a fee of $375 per course for each student to attend classes that may not be provided in their home district — often in subjects that districts might have trouble staffing.

As Desert Sage embarks on its first year as a K-12 school, Braden knows returning students are well acquainted with digital learning. She’s eager to dig into the in-person, project-based learning that’s meant to set the school apart.

“Our goal is to really be able to provide a way for students to learn how to use technology and computer sciences so that when they graduate, they can actually be leaders in [those] areas,” Braden said.

Turquoise Trail Charter School has developed a primarily virtual (there are two dedicated classrooms at the physical campus for in-person, small group instruction as needed and with parent/guardian permission) school-within-a-school called "The Academy of Extraordinary Circumstance" for students in 5th-8th grade. It has a dedicated faculty and staff, is free and open to any student in New Mexico, and "Academy" students will have the opportunity to attend Turquoise Trail after this year. More information can be found here: https://www.turquoisetrailcharterschool.org/the-academy-of-extraordinary-circumstance

Edgenuity is a great program for a blended learning option for students who have guidance by certified teachers in high school and for limited population in middle school. It would be beneficial and prudent to have elementary students participate in an online program with a learning environment conducive to project based activities that are engaging, relevant, and build upon students learning. Additionally, with the pandemic, the elementary students should be afforded support in social and emotional learning as they have experienced some trauma during this time.