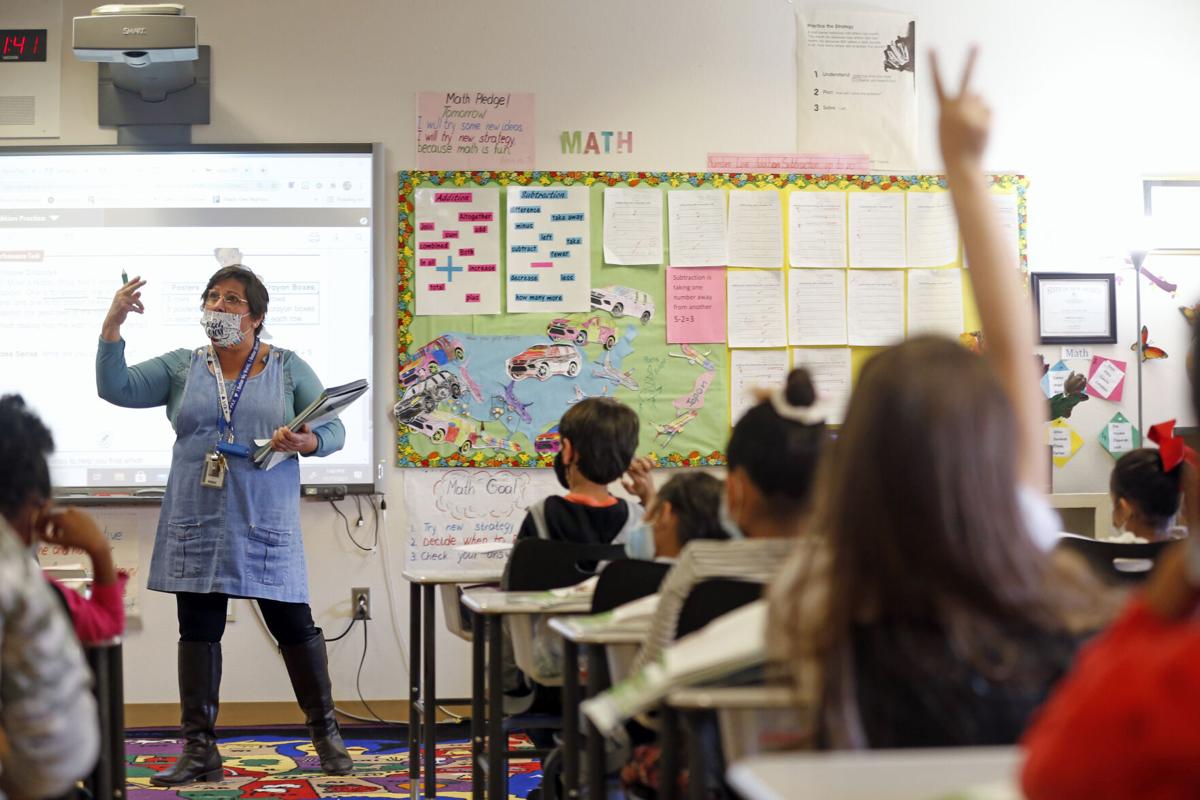 Xhevahire Krasniqi teaches a combined grade level class last month at Sweeney Elementary School. Due to a drop in enrollment, almost all classes are combined classes at Sweeney. Enrollment dropped from 361 last year to 309 this year. With such a dramatic decline in students, is it time for the district to consider closing campuses? 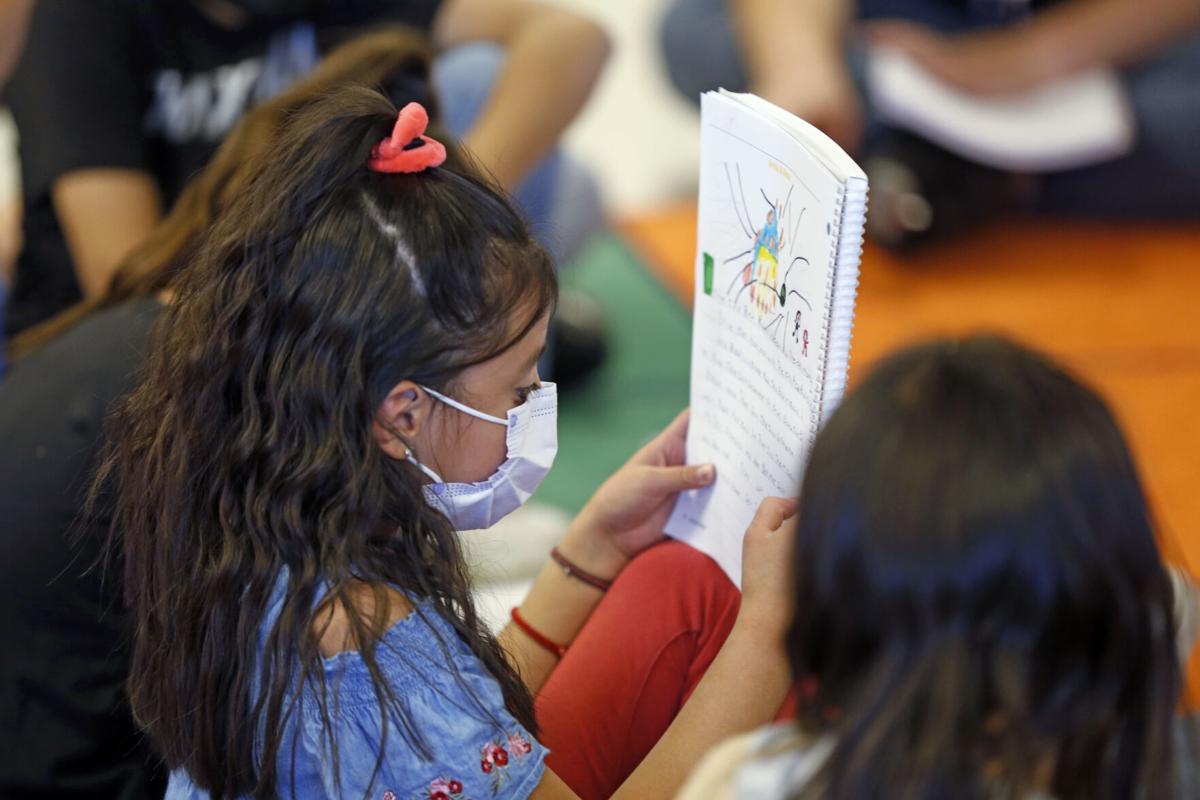 Kenya Forseca, 8, reads from her notebook last month in Julie Hill’s combined third and fourth grade class at Sweeney Elementary School. There are only 12 students in the class due to a drop in enrollment.

Xhevahire Krasniqi teaches a combined grade level class last month at Sweeney Elementary School. Due to a drop in enrollment, almost all classes are combined classes at Sweeney. Enrollment dropped from 361 last year to 309 this year. With such a dramatic decline in students, is it time for the district to consider closing campuses?

Kenya Forseca, 8, reads from her notebook last month in Julie Hill’s combined third and fourth grade class at Sweeney Elementary School. There are only 12 students in the class due to a drop in enrollment.

In 2018, the K-8 south-side school, in the Rancho Viejo area, was 28 kids overcapacity. Now it has empty seats.

A year after student enrollment at Santa Fe Public Schools took a big hit from the coronavirus pandemic, administrators had hoped to bring back some of the more than 600 kids it lost as schools shut their doors and classrooms went remote. Instead, the district saw another steep decline — even at schools like Amy Biehl that once drew concerns about overcrowding.

An enrollment count on the 40th day of the current school year showed overall student numbers dropped by nearly 250 — to 11,176 — since the year-end count in 2020-21, which would mean the loss of more than $1 million in state funding for the next year if number holds steady.

But student counts fluctuate throughout the year.

Public school funding in New Mexico is based on a complicated formula tied to enrollment, using the average number of the counts at 80 and 120 days. A comparison of this year’s 40-day count at Santa Fe Public Schools to last year’s 40-day count shows a drop of more than 850 kids.

That year, the district’s enrollment climbed to nearly 13,000 students before the pandemic hit; five years earlier, the number was closer to 14,500. The pandemic has accelerated a trend that has troubled the district for years.

Superintendent Hilario “Larry” Chavez said middle schools saw the biggest declines in past years. But “this year, as we’re looking at enrollment numbers, it’s across the board.”

Chavez said he hopes to “stabilize” enrollment, preventing a further drop in kids this year — and, therefore, a decrease in state funds to operate schools.

Schools that saw the biggest student losses between the year-end count in 2020-21 and this year’s 40-day count were Amy Biehl and the southwest-side Sweeney Elementary School, with roughly 70 fewer kids each.

Torres said she feels the effects at Amy Biehl. The number of school clubs has declined, as parents and teachers who once led them are no longer around. There are staff openings at the school, but there aren’t enough students to justify filling them.

Many former students have either moved out of town or are choosing online learning until they are fully vaccinated, Torres said. She holds out hope of seeing some of them again.

“We are hoping we’ll get a majority of [students] back next year,” she said. “Or even in January. We’ve had some say they’re coming back in January.”

Losses at some schools in the district were gains for others: The online Desert Sage Academy increased by 271 students since the the end of last year.

Officials at Santa Fe Public Schools are advocating for state lawmakers to pass legislation during the 2022 regular session that would call for districts to receive funding for 2022-23 based on their pre-pandemic enrollment levels.

“The pandemic really did accelerate the number of students we lost,” Chavez said. “This just helps us absorb costs, because everything has increased.”

Such a bill failed during the regular 2021 session earlier this year. Instead, lawmakers allowed districts to receive funds for projected enrollment growth. Districts had to opt into the initiative; if they gained 1 percent of their students back by the 40th day, they could keep the funding boost.

Santa Fe Public Schools didn’t participate. If it had, Chavez noted, it would have had to refund the state because its enrollment continued to decline.

The statewide enrollment numbers for the 40th day have not been released to the public. Last week, Public Education Department spokeswoman Judy Robinson said the data was still being “certified” and should be released this month.

Santa Fe Public Schools saw an enrollment decline of about 250 kids between the end of the 2020-21 school year and this year's 40-day count.

Limited things the schools can do really. This city is loud and clear that it doesn't appreciate young people and really only wants to serve boomers. That's why all the public investment is downtown, why little is being done about affordable housing, and why school funding and resources are so poor. This is a wealthy town. It's time everyone start paying their share for the future of this community.

NewMexico is in the middle of funding schools if you look across the country, Montana spends the same as N.M. but has the highest graduation rate 94% and 29 states spend less with better outcomes.. If we did a voucher the parents could send their kids to the best Charter and private’s schools like the wealthy.

Comrade, you make a lot of assertions without proof or realization of facts, but I will ask you this question percentage-wise what is everyone's share, and dollar-wise what is the level one should aspire to be considered wealthy?

California is looking at School Vouchers, maybe NM should look at the same. It gives everyone the same opportunity at the education they deserve.