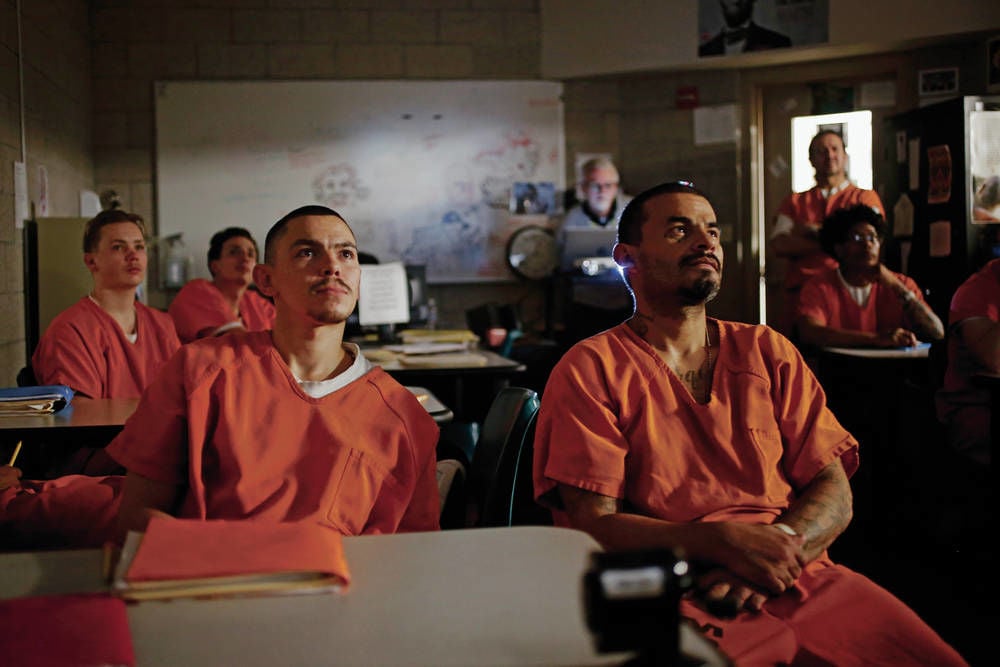 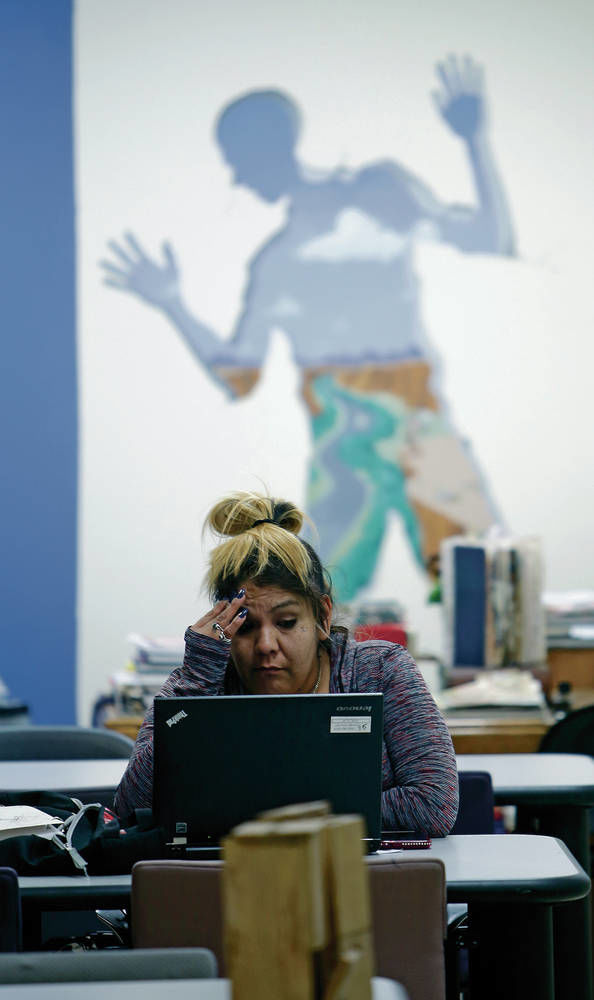 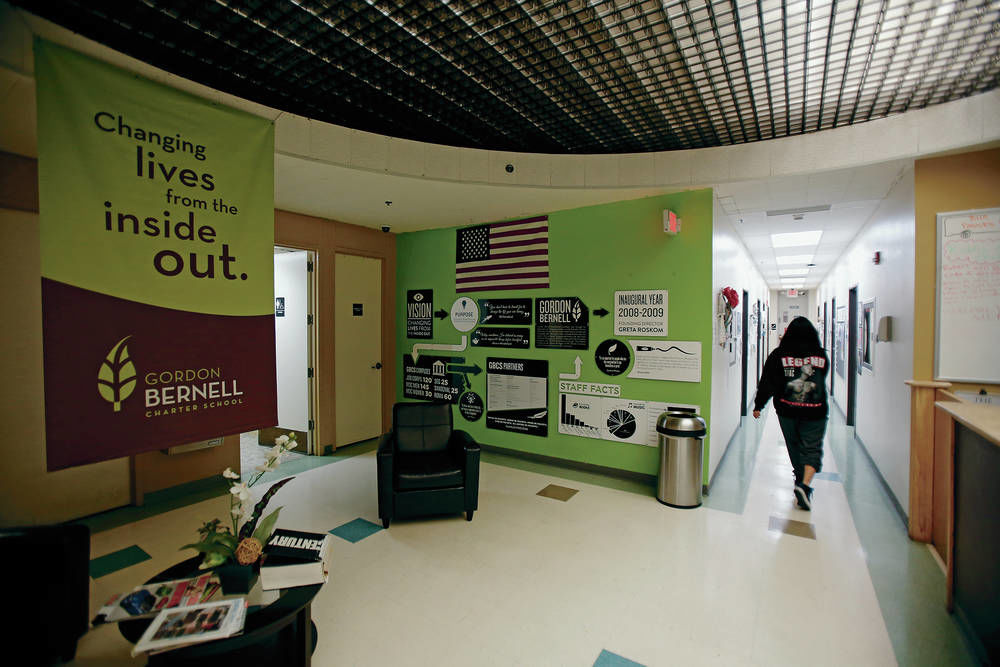 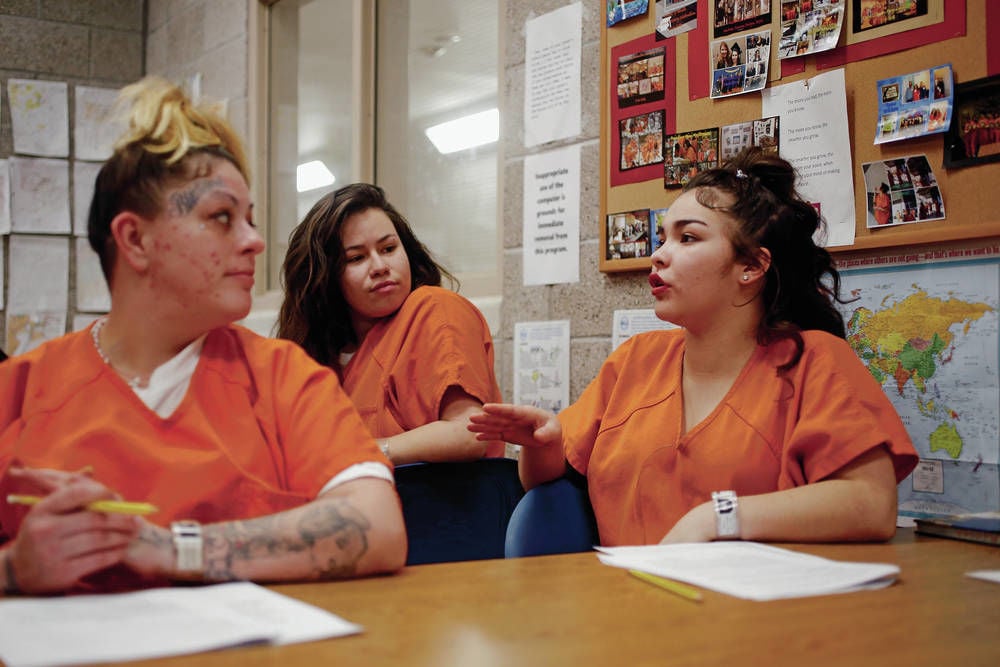 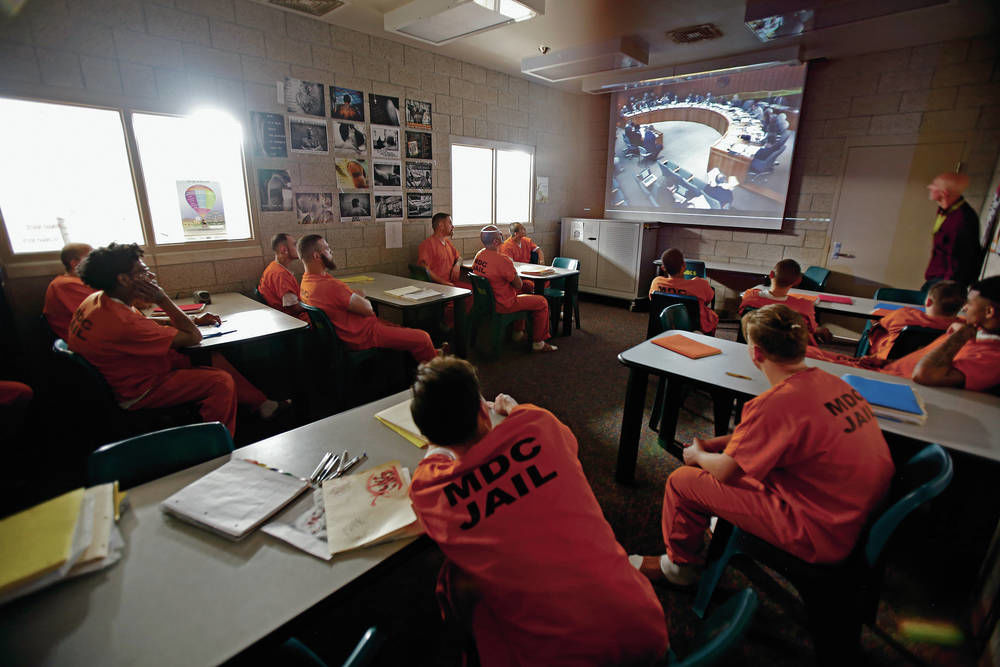 Gordon Bernell Charter School students at the Bernalillo County Metropolitan Detention Center campus watch a committee hearing where House Bill 5 was discussed last week. The bill would limit public education to students to 21 and under, but 90 percent of the school’s students are over 21. Luis Sánchez Saturno/The New Mexican

Gordon Bernell Charter School students at the Bernalillo County Metropolitan Detention Center campus watch a committee hearing where House Bill 5 was discussed last week. The bill would limit public education to students to 21 and under, but 90 percent of the school’s students are over 21. Luis Sánchez Saturno/The New Mexican

ALBUQUERQUE — Nobody has to be in Leilani Maldonado’s life skills class. The women housed in the F-unit at the Bernalillo County Metropolitan Detention Center can choose whether to attend school.

A dozen students are present, and Maldonado starts the session with a broad question.

“Let’s talk about short-term and long-term goals,” the social worker asks. “What are yours?”

“I want to finish my high school diploma,” responds Rogers, who was arrested after a 16-year-old passenger in her car was accused of shooting and killing a teen in another vehicle last May and is awaiting trial on 13 counts. “My long-term dream is to go to college.”

This course inside the jail is offered by Gordon Bernell Charter School, which also has several other campuses in greater Albuquerque. In addition to classroom instruction, the school provides adults attempting to transition back into society with a wide range of support they need to progress toward a high school diploma.

At the Capitol, Senate Bill 1 and House Bill 5, currently being considered by the Legislature, would change the definition of school age to those 21 and under on the first day of class. If the legislation passes, Gordon Bernell, where more than 86 percent of its 430 students are 22 or older, would lose the vast majority of its per-pupil funding and likely be forced to close.

And adult students would lose the opportunity to choose to work toward a high school diploma.

“I need this place. It provides me all these things that I can’t give myself,” said Jesse Cockrum, a 33-year-old student at Gordon Bernell’s downtown campus who takes the bus to a methadone clinic after class. “I’m almost off methadone and close to my diploma. I see old men at the clinic and think ‘That’s not going to be me. I’m going to finish this education and get a job.’ ”

On the 40th day of school this past fall, the state’s public schools had 736 students who were 22 or older, most at Gordon Bernell. If the 21-and-under age cap passes and Gordon Bernell closes, adults in New Mexico seeking a high school diploma would be left to choose between online high schools and GED classes. Beyond classroom content, those programs do not offer the comprehensive support that is vital to adult learners.

“MDC used to have a GED class, but they replaced it with us because we come with so much more than just classroom teachers,” Gordon Bernell Executive Director Kimberlee Hanson said. “Plenty of our students come to us reading at a third- or fourth-grade level. Around 65 percent are aged-out special education students. They can’t roll out of jail and seek out an online program. Some of our students don’t know how to log on to a computer. How can you expect them to take a GED class?”

The school, named after the man who advocated for inmates’ education in Bernalillo County and around the state, has seven campuses. Hanson estimates 85 percent of its students are either currently incarcerated or former inmates. In addition to the main county detention center west of Albuquerque, there is a campus downtown and another at the federal Job Corps Center. Elsewhere, there are campuses adjoining recovery and substance abuse treatment centers in the South Valley, Los Lunas and Rio Rancho.

Along with core classes like math, reading and science, Gordon Bernell offers life skills and parenting courses. Its campuses have social workers, occupational therapists and academic counselors. The staff develops individualized academic plans for each student.

One of them was Katrina Lucero, 23, who dropped out of Albuquerque’s Valley High School in 2012 before unsuccessfully enrolling in a GED class at a public library. She graduated from Gordon Bernell’s downtown campus in December and is now studying electrical trades at Central New Mexico Community College.

“The GED is a lot of studying for one test you can fail and try again. [Gordon Bernell] is totally different because you can show up each day and make a little progress toward your diploma. It’s not all or nothing on one day,” Lucero said. “At Gordon Bernell, I had four teachers that really really showed they cared. If I missed class they would call. I knew if I didn’t show up they would call. That’s why I kept going to school.”

New Mexico spends around $40,000 a year on each prison inmate. According to the latest data from the U.S. Census Bureau, the state spent an average of $9,693 on each public school student in 2016. Since opening in 2008, 508 students have graduated from Gordon Bernell. Fifteen percent of those graduates have been incarcerated again.

That recidivism rate is much lower than that of the general population. According to a July 2018 report by the New Mexico Sentencing Commission, 49.9 percent of males and 44.1 percent of females who were released from a state prison in 2014 were incarcerated again within three years.

Last week, classrooms of detention center students watched on a projector as some of their classmates and teachers gave testimony at the Roundhouse in support of amendments to SB 1 and HB 5 that would remove the age cap.

“It is tough because you’re not sure how long this school is going to be around. Every day we are dealing with these students who are really trying to turn their life around. Knowing this program could be cut from under them, it’s tough to see them every day,” said Chris Cozzone, principal of Gordon Bernell’s MDC campus. “None of the teachers want to work in a regular school. This is the population we want to work with.”

For now, under the cloud of uncertainty, class must continue. After Rogers explained her short- and long-term goals, other students in Maldonado’s life skills class talked about graduation, reconnecting with family, staying off drugs and finding steady jobs as their own goals.

Rogers attempted to complete her freshman year at Albuquerque’s West Mesa High School four straight years before dropping out. She has taken and failed the GED exam but is now on course to graduate high school inside MDC by June.

“A lot of us here don’t have those skills to leave and get a job. We don’t know how to multiply or divide or even read. If most of us took that GED exam, we wouldn’t pass,” Rogers said. “Being able to go to this school gives us a future. We don’t have to go back to selling drugs or doing stupid things that will end us back up in here.

“Instead of going out there and having no hope, this gives us hope.”