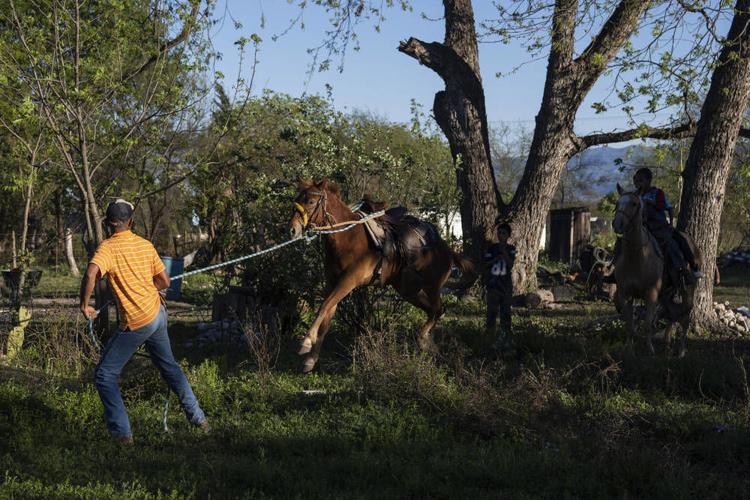 Celso Salazar Bosques leads a horse over a ditch in the rural area of Mexico where the Mascogos live and work is hard to come by. Carolyn Van Houten/Washington Post 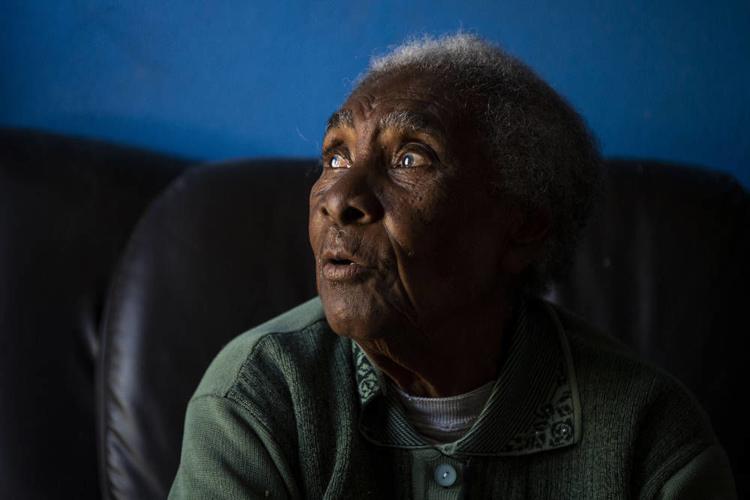 Lucia Vazquez Valdez, 86, sings hymns from the slave tradition in English, though she remembers little of the language. She’s the oldest living Mascogo, a descendant of escaped slaves who lives in Mexico. Carolyn Van Houten/Washington Post 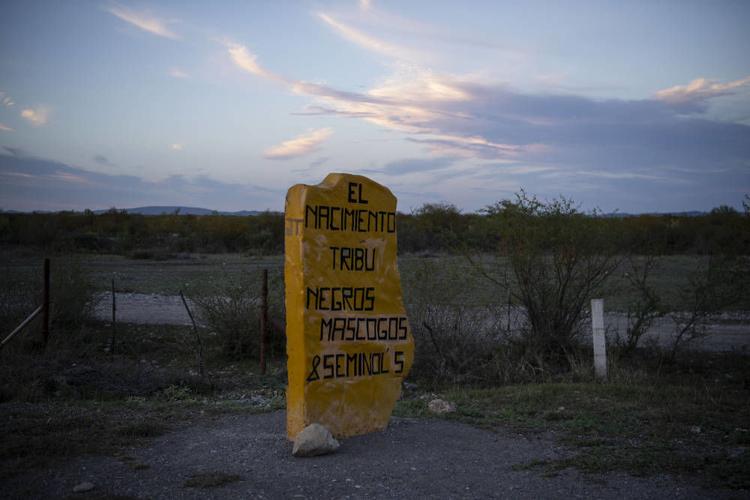 Celso Salazar Bosques leads a horse over a ditch in the rural area of Mexico where the Mascogos live and work is hard to come by. Carolyn Van Houten/Washington Post

Lucia Vazquez Valdez, 86, sings hymns from the slave tradition in English, though she remembers little of the language. She’s the oldest living Mascogo, a descendant of escaped slaves who lives in Mexico. Carolyn Van Houten/Washington Post

NACIMIENTO DE LOS NEGROS, Mexico — Their ancestors were African-Americans who escaped from the United States to Mexico in the 19th century, fleeing the slave trade for a desert village at the base of the Sierra Madre. They were called the Mascogos, roughly 60 black families who spoke and prayed in English as they hid from the white men who wanted to put them back in shackles.

That was six generations ago. Since then, their English vocabulary has dissipated, replaced by the Spanish of Northern Mexico. Droughts destroyed their farms. Drug cartels have inched closer to their village, whose name translates literally as “Birth of the Blacks.”

Now members of this community of 300 are heading back to the United States. It’s another vector in a history of migration, sometimes voluntary, sometimes forced, from slave ships across the Atlantic to the cross-border scramble for 21st-century jobs.

At a time of unprecedented debate over immigration, and the current surge in border crossings, the history of the Mascogos reflects the long view on human migration, the way a community can be pushed and pulled across borders over centuries, eventually returning to the place from which they fled.

Their relationship with the United States is fraught, but their reason for returning — both legally and illegally — is not unique: They’re looking for work. Dramatic droughts have desiccated the corn and bean farms of Mexico’s northern Coahuila state. More than half the village’s livestock has died. Where there are agriculture jobs, they pay just a few dollars a day. New factory jobs in Mexico are hours away and don’t pay much more.

“There’s one thing we all know now,” Juana Vazquez, 50, said in Spanish. “If you want work, you cross the border.”

This week, Vazquez was packing her bags for West Texas, where she’s been hired to clean a ranch house in the town of Fort Stockton. She has received a temporary work visa. She expects to earn about $10 per hour.

Hundreds of thousands of Mexicans receive temporary work visas in the United States every year. Thousands more cross the border illegally in search of jobs. But for Vazquez and the other Mascogos traveling to the United States, those decisions come with a complicated subtext: How does it feel to return voluntarily to the country where your ancestors were enslaved?

“That was a different time,” Vazquez said. “Yes, it makes us sad, but it’s over. There is work in the United States, and I have no problem crossing the border to do it.”

Other Mascogos have made deals with their children: They can work in the United States, but they must not settle there. That’s the agreement that one of Vazquez’s cousins, Julio Cesar Salazar, made with his five kids, two of whom are now in the United States.

Vazquez, like the rest of the Mascogos, grew up vaguely aware of her community’s circuitous trajectory through history. The village celebrated Juneteenth, the holiday on June 19 that commemorates the abolition of slavery in the United States. Women wore dresses that had changed little from the Antebellum South. Her grandmother, Lucia Vazquez Valdez, still sings hymns in English; she attached her family’s American name, Payne, to her Mexican one.

But even if Vazquez wanted to forget the history of the Mascogos or her connection to the group, it would be nearly impossible. Her dark brown skin and her hair are rare features in this part of Mexico. When she travels outside Nacimiento, people call her la negrita — the little black one. They look at her quizzically and ask: Where do you come from?

“I tell them, ‘There are black people in northern Mexico!’ ”

The Mascogos descend from slaves who escaped from plantations in the American South during the 17th and 18th centuries. They fled first to Florida, which was then owned by the Spanish, who generally allowed escaped slaves to live as free men and women. Some lived alongside members of the Seminole tribe and eventually became known as Black Seminoles — or, in Spanish, Mascogos.

The United States took control of Florida in 1821. Nine years later, President Andrew Jackson signed the Indian Removal Act, which forced native tribes in the Southeast, including the Mascogos, along the Trail of Tears, to Oklahoma.

That move made them once again vulnerable to Southern slaveholders. So in July 1850, 309 Mascogos escaped to Mexico, where slavery had been abolished decades earlier, crossing the border near what is now Eagle Pass, Texas.

They settled in Nacimiento, in the state of Coahuila. But many returned to work as “Indian Scouts” for the United States, defending military installations in Texas from other tribes. In exchange, the Mascogos were offered land and citizenship in America, a pledge that apparently dissolved at the end of the 19th century.

For much of the 20th century, the Mascogos lived and farmed in Nacimiento, a two-hour drive from Eagle Pass. But by the 1990s, it had become increasingly clear that the job prospects in the United States were better.

“For a lot of the Mascogos, they don’t look to the United States as a place where they were enslaved but as a place they were able to escape as free people, a place they can now freely choose to return to. It’s a narrative of resilience and strength,” said Rocio Gil, who is completing her Ph.D. dissertation on the group at the City University of New York.

Some got tourist visas and overstayed them. Others took the short swim across the Rio Grande.

Starting in 1999, Servando Cervantes crossed the border illegally once a year to work on farms. Eventually, he says, he secured permanent residence.

He thought about what it meant to return to a country that had enslaved his ancestors. He didn’t see the choice as a moral dilemma — it was strictly economic.

“I’m not going to blame a child for the sins of his father,” he said.

He’s back living in Nacimiento now. He says he lost his green card and was deported a few years ago after being arrested for fighting in a bar. Now he watches as neighbors leave the village, one by one, to join what has become a torrent of migration.

Some are farmworkers who save up to $2,000 to pay smugglers to get them over the border. Some are students at John Horse Secondary School, named after the Mascogo who led the group to Mexico in 1850.

Enrique Salazar, a 17-year-old senior in a New York Yankees shirt, said: “As soon as I get the chance to go to the U.S., I’m out of here. I care about the culture of our tribe, but I also need to make some money.”

A neighboring tribe with historic ties to the United States and Mexico, the Kickapoo, has been granted citizenship in both countries. The Mascogos have made several attempts, but so far have not been recognized by the U.S. Bureau of Indian Affairs. A feud with the Seminoles, who argue that “Black Seminoles” aren’t genuine members of the tribe, has made their chances of securing U.S. citizenship unlikely.

That has left Mascogos to weigh the same options as many in Northern Mexico: Wait for a visa, or take your chances with the river.

“This place is emptying out,” said Evangelina Barnes, 50, a Mascogo who was born in Nacimiento but now lives in San Antonio.

This week, Barnes was one of several Mascogos back from the United States for a visit.

Corina Harington, 45, was a small child in the 1980s when her father took their family from Nacimiento across the border to San Antonio. She’s lived there since, now as a U.S. citizen. Last week, she was back in the village with her cousin, Dina Rodriguez, also a Mascogo, who lives in Lubbock, Texas.

“I understand why they want to migrate,” Harrington said. “I love this place, but the fact is, there’s really not much here. This is not an easy place to make a living anymore.”

During their visit, Harrington and Rodriguez sat down with Lucia Vazquez Valdez, the oldest living Mascogo.

At 86, Valdez is blind and has difficulty hearing. She remembers little of the English her parents and grandparents spoke fluently. But, like magic, she can sing the English words to the hymns and gospels her ancestors once sang.

This week, Rodriguez and Harrington sang with her, recording videos on their phones. When Vazquez Valdez sang, her voice was louder and more assertive than when she spoke, as if she was channeling an entire chorus.

“Thy kingdom come, thy will be done,” she intoned in perfect English.

“That’s something we’ll share back in Texas,” Harrington said.

Fix CYFD, and you've got a great governor

Ready-made casitas are cool, but not yet scalding-hot

Animals teach us about diversity