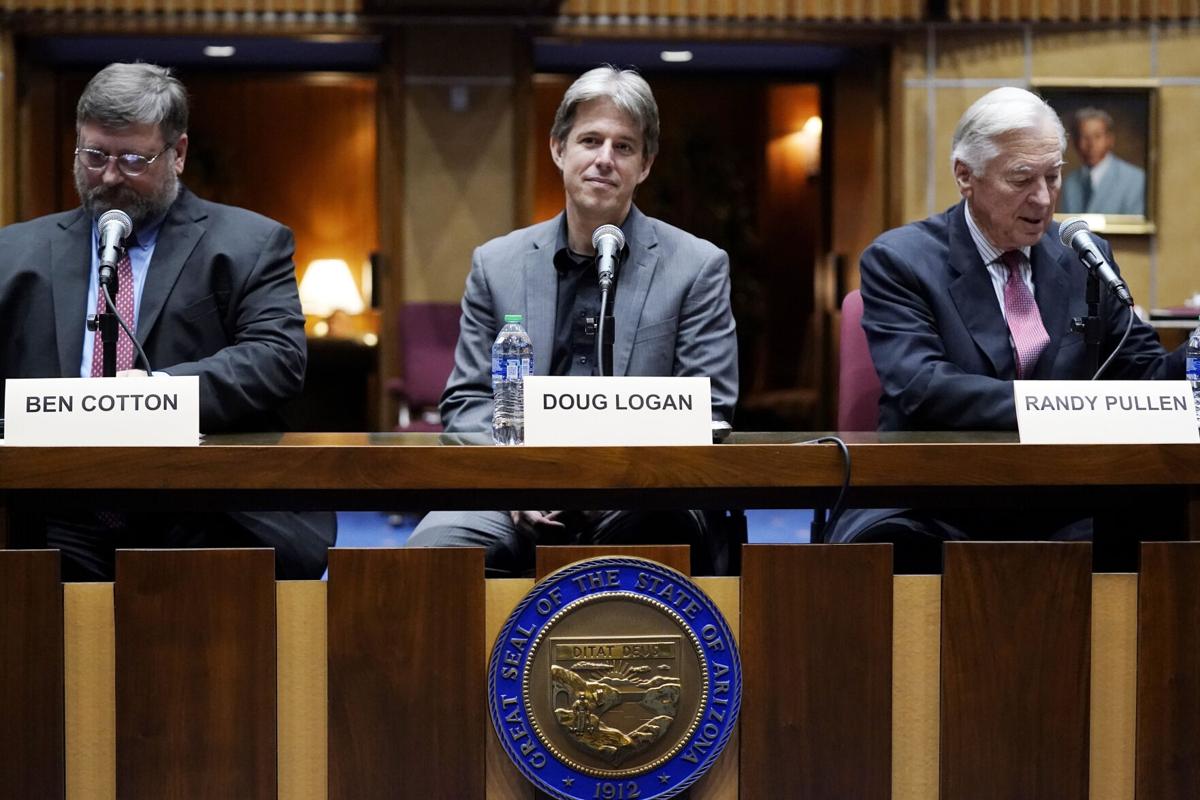 Cyber Ninjas CEO Doug Logan, center, is flanked by Ben Cotton, left, founder of digital security firm CyFIR, and Randy Pullen, right, the former chairman of the Arizona Republican Party, prior to the Arizona Senate Republicans hearing review of the 2020 presidential election results in September in Maricopa County at the Arizona Capitol in Phoenix. 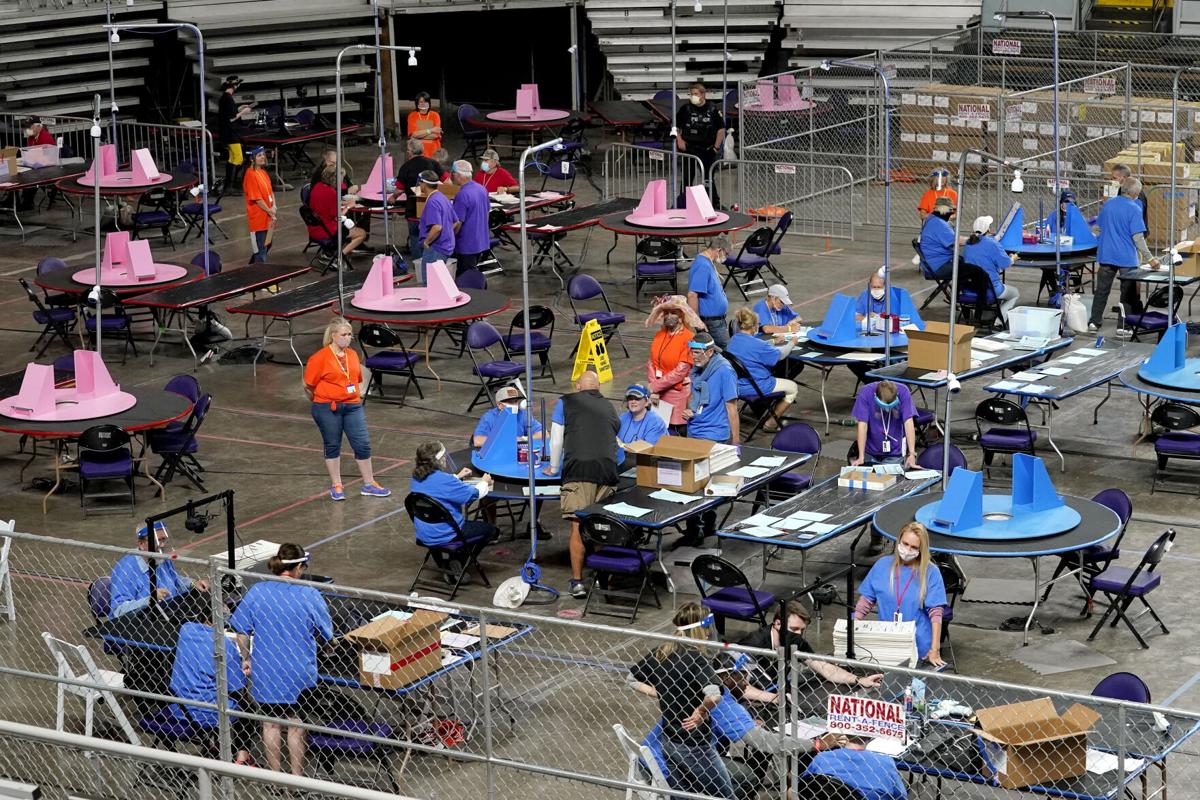 Maricopa County ballots cast in the 2020 general election are examined and recounted in May by contractors working for Florida-based company, Cyber Ninjas at Veterans Memorial Coliseum in Phoenix.

Cyber Ninjas CEO Doug Logan, center, is flanked by Ben Cotton, left, founder of digital security firm CyFIR, and Randy Pullen, right, the former chairman of the Arizona Republican Party, prior to the Arizona Senate Republicans hearing review of the 2020 presidential election results in September in Maricopa County at the Arizona Capitol in Phoenix.

Maricopa County ballots cast in the 2020 general election are examined and recounted in May by contractors working for Florida-based company, Cyber Ninjas at Veterans Memorial Coliseum in Phoenix.

PHOENIX — The Donald Trump supporter hired to run a review of the 2020 election in Arizona told the state Senate president he’s starting a new company with some of the same employees as Cyber Ninjas, the old firm he’s closing as it faces massive court fines for refusing to release public records.

Cyber Ninjas founder Doug Logan told Republican Senate President Karen Fann in text messages that he was unable to sell the firm because of “too much negativity around the name,” but he plans to sell off all its assets to pay debts and eventually file for bankruptcy. His lawyer says Logan can’t fulfill a court order to release public records because the company has no money, even though Trump allies raised millions of dollars for the unprecedented partisan election review.

Logan did not say whether his new firm would do essentially the same work as Cyber Ninjas, but he said his efforts have been running into obstacles. He told the Associated Press he’s not trying to circumvent the court fines and public records orders, but he needs to work.

“If Cyber Ninjas goes out-of-business I either need to get a job with someone else (which was considered), or start from scratch with a new company,” Logan wrote in an email to the AP. “The latter is the route I chose to go.”

The text messages also suggest a growing rift between Fann and Logan, a cybersecurity consultant with virtually no experience in elections or auditing until Fann hired him last spring to conduct what she called a “forensic audit” of the 2020 election in Maricopa County, home to Phoenix and 60 percent of Arizona’s voters.

Logan’s team oversaw a hand recount of ballots that confirmed President Joe Biden’s narrow victory in Maricopa County, examined vote-counting machines and analyzed a trove of election data. His report claimed to find a number of irregularities, which Trump and his allies have repeatedly trumpeted to support their false claim the election was stolen, but election experts said the claims were inaccurate, misleading or based on a flawed understanding of the data.

The text messages were sent from Logan to Fann on Monday and released to the Associated Press on Friday in response to a public records request. Chris Kleminich, the Senate’s public records attorney, said Fann did not respond to Logan.

“I’m not niave enough to think for a second that the Senate has my back,” Logan wrote in the messages. “The actions chosen through all of this speak quite a bit louder than the words; and make it clear the Senate has no intention of honoring what was committed to. The choice has been made to try what can legally be gotten away with rather than what is ethical or right.”

Logan told the AP his dispute with Fann stems from the outstanding $100,000 payment and the Senate’s refusal to pay his legal fees in the public records dispute, which he believes is required under their contract.

“I have no intention of throwing you or anyone else under the bus, but I expect the time has also come for me to stop completely covering for decisions I didn’t make,” he continued to Fann.

Cyber Ninjas has been fighting two public records lawsuits filed by the Arizona Republic newspaper and the watchdog group American Oversight, arguing it is not subject to the public records law because it is a private company. Judges in both cases and the state Court of Appeals have disagreed.

Judge John Hannah of the Maricopa County Superior Court said Thursday he will fine Cyber Ninjas $50,000 a day starting Friday if it doesn’t release public records. He warned that he’ll extend the fines to “individuals who are responsible for compliance with this order” and not just the company, if necessary.

“The court is not going to accept the assertion that Cyber Ninjas is an empty shell and that no one is responsible for seeing that it complies,” Hannah said.

Logan told the AP he plans to comply with the court order, but he wants more clarity from the judge and money from the Senate to cover costs, which he said the court is underestimating.

“When the rulings of the court are no longer ambiguous, and are within our capabilities to execute; it will happen,” he said.