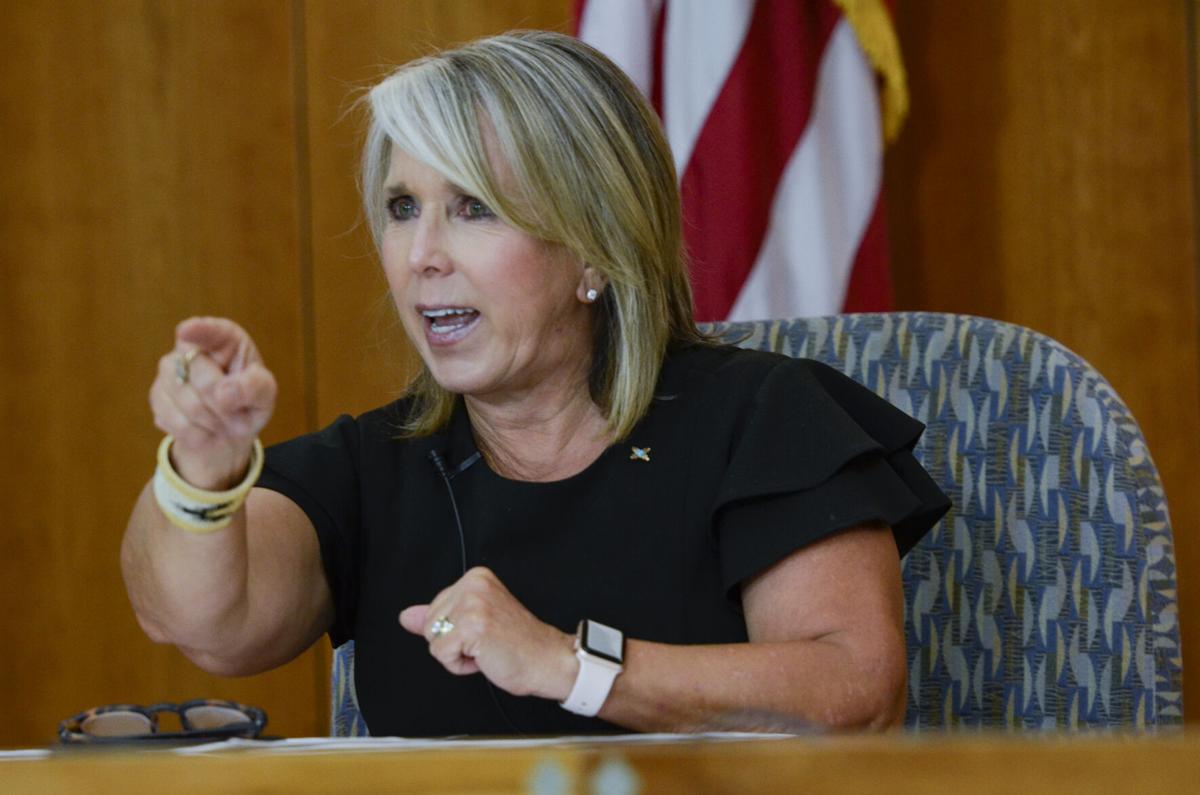 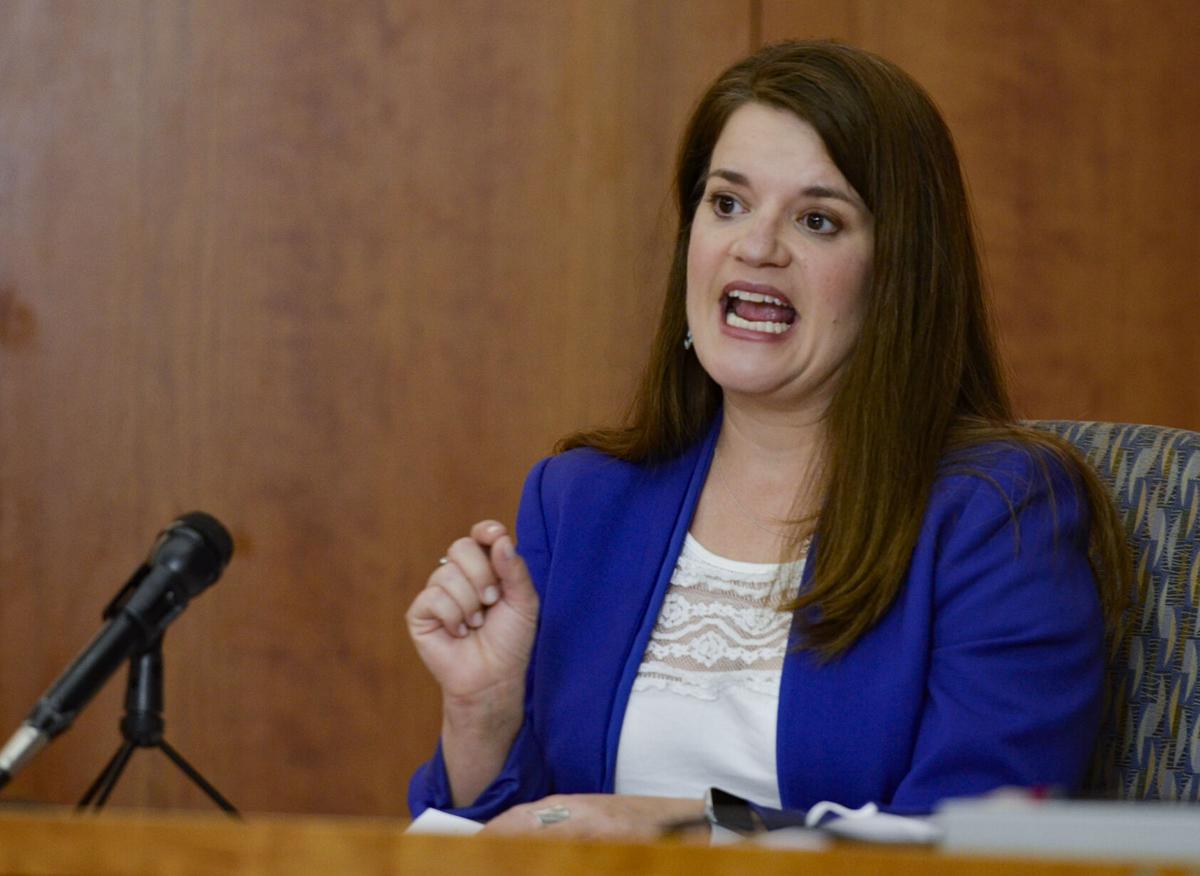 New Mexico Secretary of State Maggie Toulouse Oliver on Thursday discusses the November election during a news conference addressing the state’s response to the coronavirus pandemic.

New Mexico Secretary of State Maggie Toulouse Oliver on Thursday discusses the November election during a news conference addressing the state’s response to the coronavirus pandemic.

While the state is still meeting the majority of its target criteria in the battle against COVID-19, the disease caused by the virus, rapid responses to workplace reports of infections among employees rose last week by 100 compared to the previous week.

“This is a poor indicator about where we’re heading,” Lujan Grisham said in her weekly news conference broadcast on Facebook Live. “We have to do better.”

Additionally, New Mexico’s transmission rate for the coronavirus remains slightly above the state’s target, and there were 239 new cases reported Thursday — much higher than recent daily averages.

Officials have attributed the upticks to the state’s recent easing of some public health restrictions and increased activities over Labor Day weekend. On Thursday, the governor also said activities involving groups of more than 10 people were to blame.

New Mexico last week relaxed some restrictions to allow youth sports teams to resume noncontact practices with no more than 10 participants. Swimming pools, ice skating rinks and pumpkin patches also are allowed to operate with a maximum of 10 in a group.

Overall, the state is still doing a good job of battling the virus, the governor said, remaining within targets in areas such as contact tracing and statewide health care system capacity.

New Mexico’s test positivity rate, which measures how many people who are tested for COVID-19 turn out to have the disease, was 2.1 percent as of Tuesday. That’s significantly below the state’s target of 5 percent.

New Mexico also has done a good job so far at partially reopening its public schools without triggering a major uptick in cases, the governor said.

With 65 schools statewide now operating under a hybrid model in which students attend class in person part of the week, there have only been 71 new cases among students and staff since Sept. 7.

“We are seeing successful reentry into public schools,” the governor said.

Until Labor Day, all public school students in New Mexico had been learning via online programs since the COVID-19 pandemic forced campus closures in March. Many districts, including Santa Fe Public Schools, are waiting until October or later to begin a hybrid plan.

Human Services Secretary David Scrase said earlier this week it would take a couple of additional weeks for the state to have data on how reopening schools has affected the spread of the virus.

The governor expressed concern Thursday about the rise in rapid responses, which shot up 250 percent in Bernalillo County and 133 percent in Sandoval County in the week of Sept. 14-20 compared to the previous week.

A rapid response occurs when state agencies immediately contact employers after one or more of their employees tests positive for COVID-19. In an effort to prevent further spread of the disease, businesses are typically required to temporarily halt operations, test employees, disinfect workplaces and implement COVID-safe practices.

Rapid responses at restaurants increased to 24 from seven during that period, while rising at retail and wholesale locations to 40 from 19.

“I need folks to double down on your good COVID-safe practices,” she said.

The governor added that not enough New Mexicans have been getting testing for the novel coronavirus.The state’s COVID-19 transmission rate was at 1.09 as of Tuesday, above the state’s target of 1.05. Anything above 1 means an infected person will spread the virus to at least one other person, causing a steady increase in COVID-19.

The current transmission rate had remained consistently below 1 since late July, according to state figures.

The seven-day rolling average of new cases was 110 as of Tuesday — a figure well under the state’s target of 168 but calculated before Thursday’s report of 239 new cases. There were two new deaths reported Thursday for a total of 859.

As of Thursday, 66 people were hospitalized statewide and 16 were on ventilators. Some 885,000 tests had been conducted statewide.

While restrictions were relaxed in some areas last week, officials are not yet willing to expand indoor dining capacity or reopen bars, theaters and other venues where larger groups can gather. The governor said last week that New Mexico would have to show improvement for at least five weeks before she would consider further reopening.

She mentioned the five-week benchmark again Thursday, saying that if key coronavirus numbers decline, “then we can talk about what are the next set of openings.”

That next wave of openings could include New Mexico’s racetrack and casino operators, which the governor said have been in talks with the state as they remain closed per public health orders.

“We are clear that racinos — particularly because of their COVID-safe practices — are certainly an area we are hopeful we can get to,” the governor said. “But [it’s] premature to tell you that’s on the immediate horizon.”

The governor also said it is too soon for New Mexico to begin allowing contact sports.

New Mexico Secretary of State Maggie Toulouse Oliver also spoke at the news conference, reassuring voters about the electoral process 40 days before the election for president, most of the state’s congressional seats and all of its legislative offices.

“Voters should rest assured that you will be able to cast your ballots safely and securely,” she said.

The state has 1.3 million registered voters, and more than 247,000 people — or around 20 percent — have have applied for an absentee ballot, she said.

More than three times as many Democrats as Republicans have applied for an absentee ballot, according to numbers released Thursday by the state.

Lujan Grisham also addressed the recently reported depletion of the state’s $465 million unemployment benefits trust fund and the Workforce Solutions Department’s reliance on about $35 million in borrowed federal funds to pay out benefits.

“We knew that we were going to deplete the available resources in the state fund because we have unprecedented — across the country — unemployment related to COVID,” the governor said.

She said New Mexico hopes Congress will give more support to help states fill their funding gaps to pay for the benefits.

“If that doesn’t occur, we’re going to have to work with the Legislature on a long-term plan,” she said.

Coronavirus is surging worldwide. The fact that we have less of a surge shouldn’t make anyone less vigilant.

To the dozen people (and their dozen kids) who were having a non-masked, non-distanced party in a private park in my neighborhood this evening: YOU are the problem, and shame on you! (I'm reasonably certain that you're not quarantining together, because you came in 7 separate cars.)

I know, we've all been in quarantine for 6 months and we're getting antsy. But the only way to beat the virus is to keep up the preventive measures, and every gathering like this raises the chance of infection.

Just today the Dept of Health had an illegal Rules Hearing, allowing 16 and 17 year old high school students to work as direct caregivers in nursing homes. This is down from a requirement to be 18 years old. What a wonderful idea, we can open up the schools and transport Covid directly to the nursing homes!!! All this with zero public input, and using an Emergency Rulemaking with no public input to lower the age. Are they nuts??? Or simply intent on killing off the old folks?? The very least they should have done was have a very open discussion on this change. Nope, secrecy is their thing... Thanks Michelle. Her administration is very much into secret "Emergency Rulemaking", even in 2019 before Covid. This shows their contempt for public input and our laws. Michelle needs to wake up, her Cabinet is out of control, with illegal Rule Making, in violation of the Rules Act, the norm under Michelle. But then, as Queen, why bother with public input? She's beyond that...

Nice watch, nice ring. I would like my wife to file for unemployment, your website governor said initially that it would be the sevond week of September so after checking in everyday guess what? It said the money ran out sept 5th! Is that how you bought that watch and ring?

Where's your mask, you hypocrite?

You remind me of my scolding, self-righteous 3rd grade Sunday School teacher.

Oh my, what would we do without the weekly scolding and sanctimonious BS by this tiny tyrant.

blah, blah, blah, blah, another day of the mouth talking. Trying to be a perfectionist to make up for her psychological inadequacies. People have long stop listening just do what you do best BEG THE FEDS FOR MORE MONEY, since there are no jobs, and education is sinking faster than the titanic

I don’t know if the line in your article “ The state’s COVID-19 transmission rate was at 1.09 as of Tuesday, above the state’s target of 1.05. Anything above 1 means an infected person will spread the virus to at least one other person, causing a steady increase in COVID-19.” is a direct quote from the Governor. However the statement is very misleading. The number indicates the illness is indeed spreading, however it by no means that an infected person “WILL” spread the virus. This is a dangerous mis representation of the number as many people never spread the illness to others, while some spread it to several. Gross mis-statements like this are very irresponsible.

How fascinating that she wants another 5 weeks of lockdown.... hmmmmm, hey, thats when the election is! What a coincidence. No way this is politically motivated.