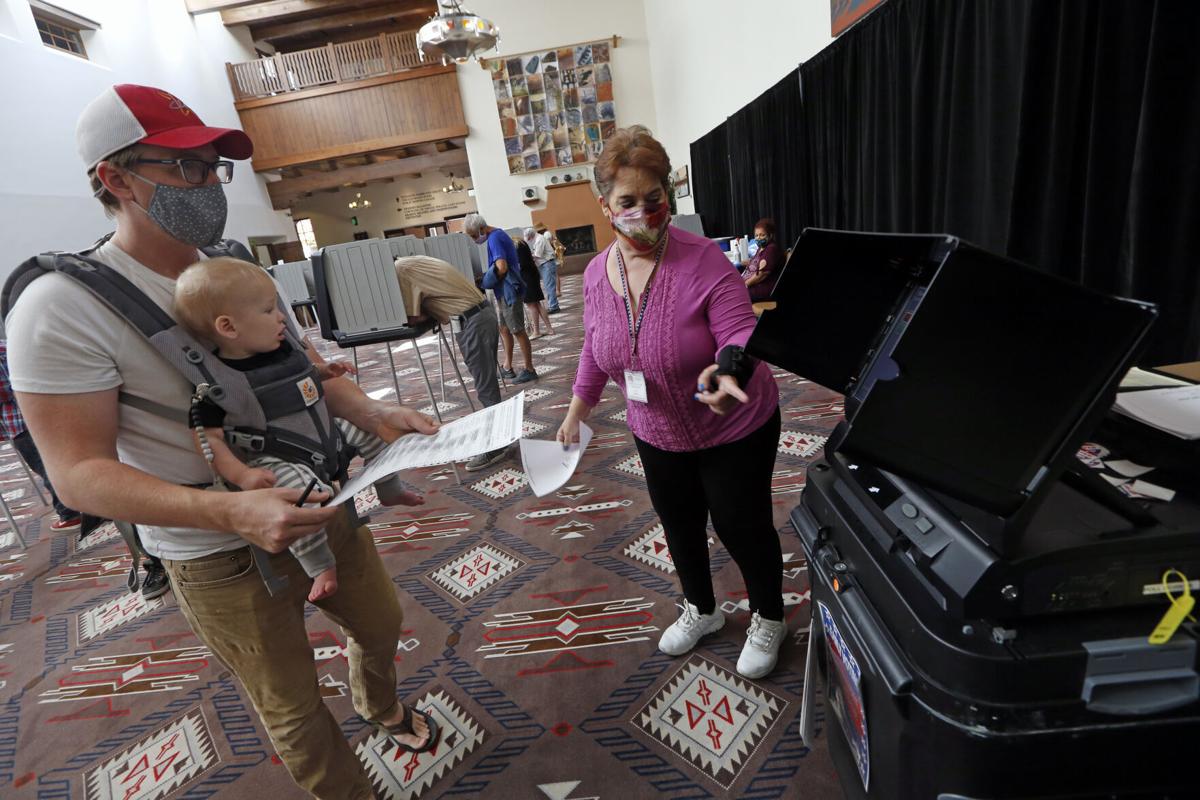 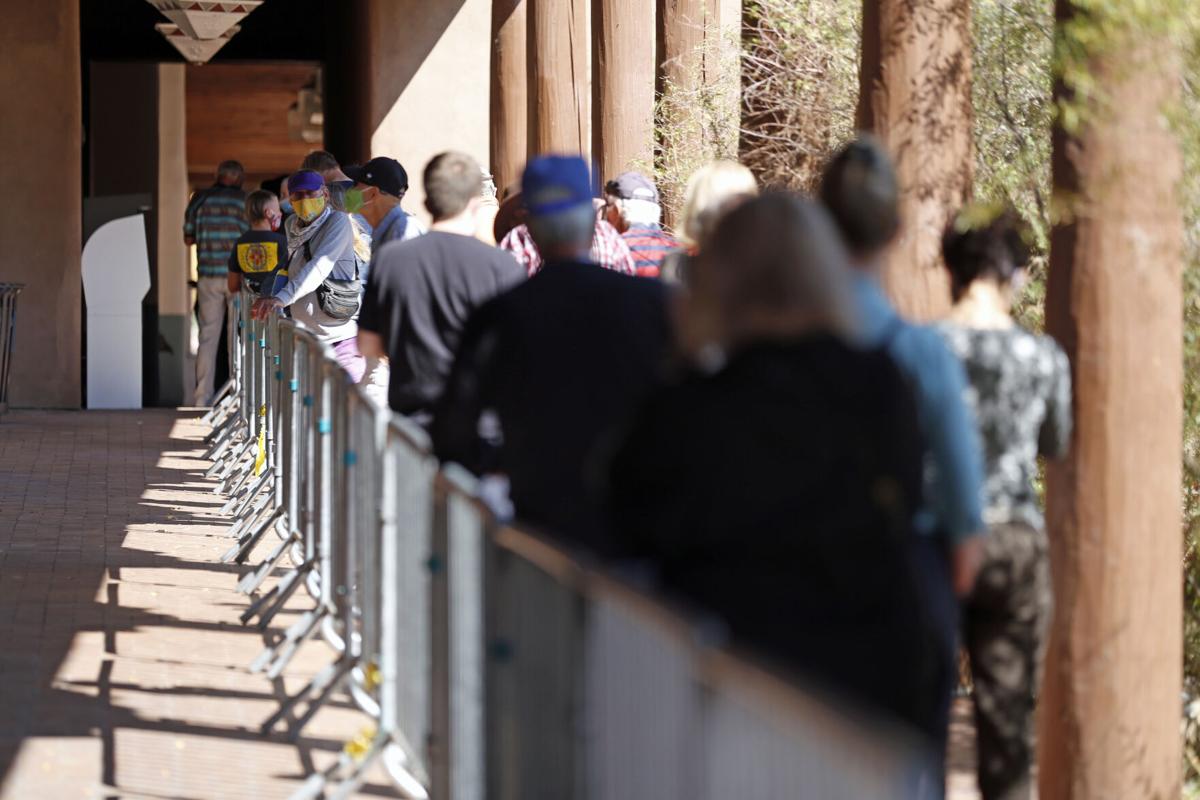 Voters line up outside the Santa Fe Community Convention Center on Friday.

Kathy Jackson of Santa Fe fills out her ballot at the Santa Fe Community Convention Center on Tuesday, the first day of early voting. 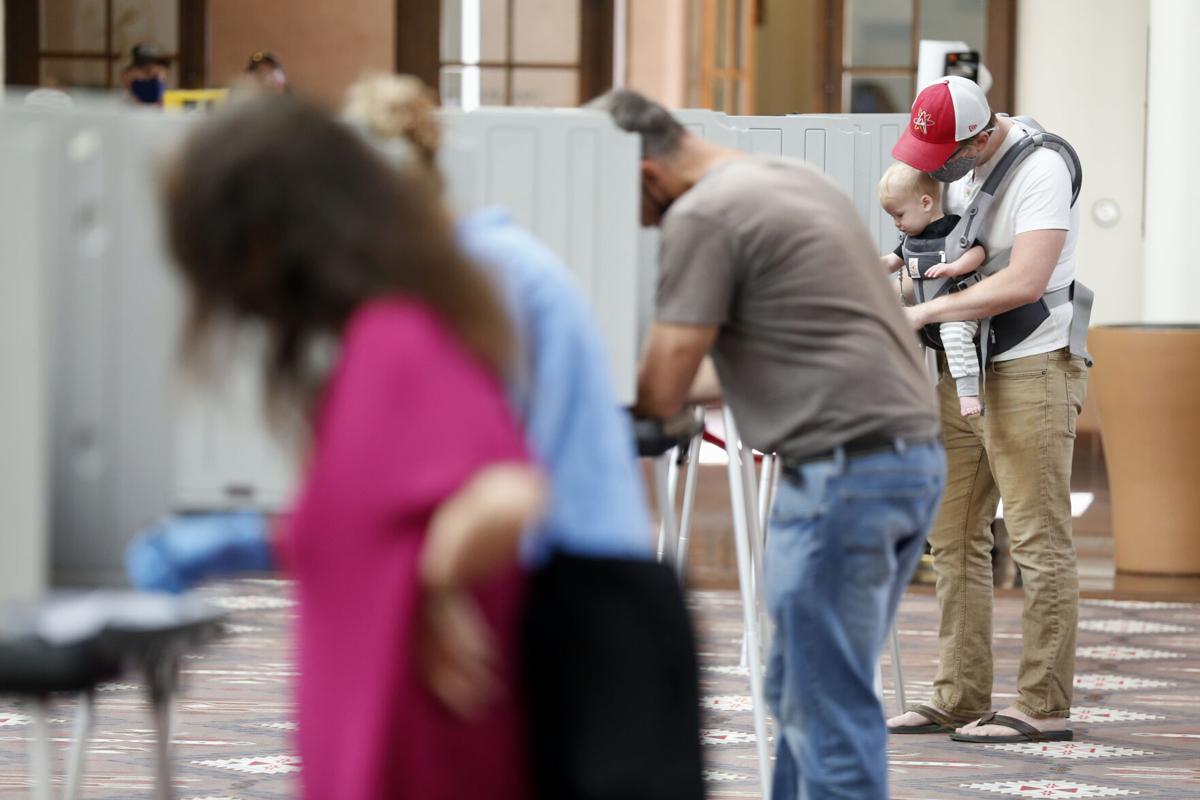 Joshua Dennis of Santa Fe holds his 10-month-old son, Aleksander, as he fills out his ballot Friday at the Santa Fe Community Convention Center. 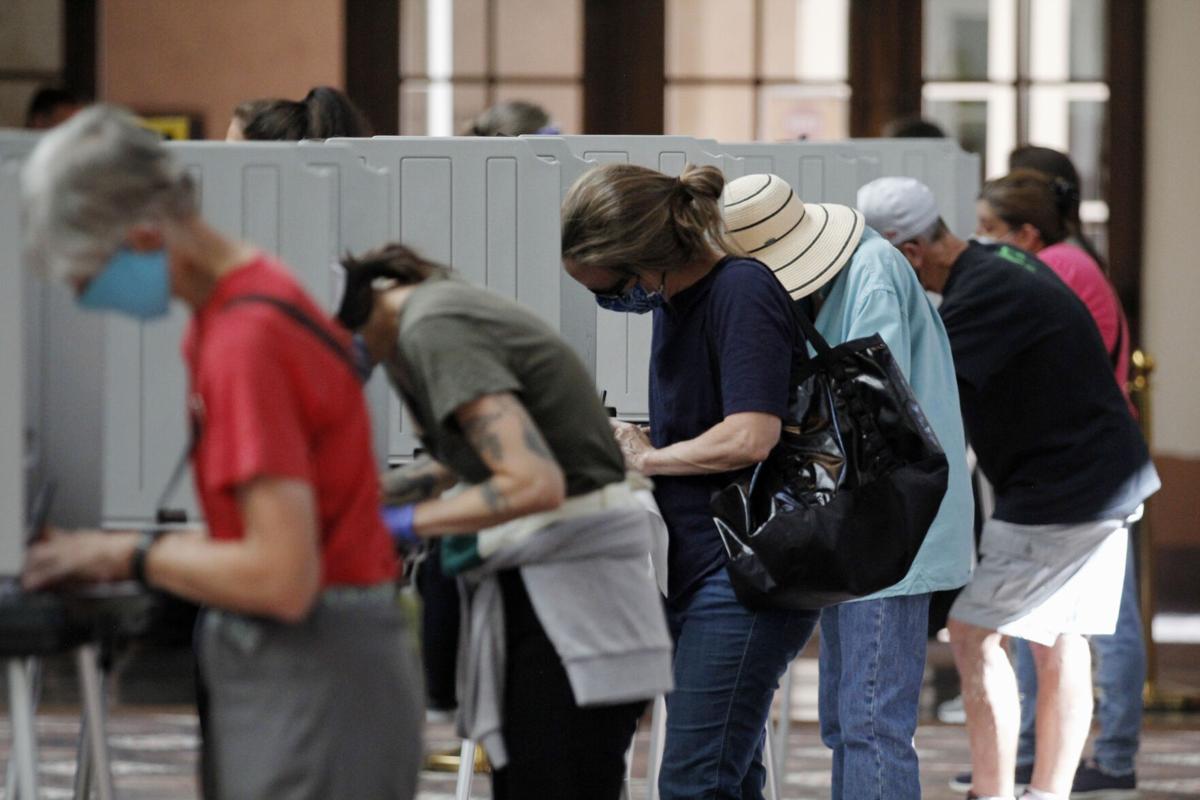 Voters fill out ballots at the Santa Fe Community Convention Center on Oct. 6, the first day of early voting.

Voters line up outside the Santa Fe Community Convention Center on Friday.

Kathy Jackson of Santa Fe fills out her ballot at the Santa Fe Community Convention Center on Tuesday, the first day of early voting.

Joshua Dennis of Santa Fe holds his 10-month-old son, Aleksander, as he fills out his ballot Friday at the Santa Fe Community Convention Center.

Voters fill out ballots at the Santa Fe Community Convention Center on Oct. 6, the first day of early voting.

The intense partisan atmosphere of the presidential election is fueling fears of voter suppression and distrust in the election process as routine procedures and hiccups could become magnified, some New Mexico election officials worry.

During the first several days of in-person early voting, multiple counties experienced problems when people who had requested an absentee ballot tried to vote in person amid worries about how changes within the U.S. Postal Service might affect voting by mail.

Those issues, coupled with a heightened anxiety about the election amid the coronavirus pandemic, have added to the headaches clerks are facing in the first several days of voting.

“All these people communicating with me by email and phone and it’s like a panic,” said Santa Fe County Clerk Geraldine Salazar. “It’s concerning, because if someone finds a rumor … I’m having to react to everything to correct the information. And so it’s very time-consuming and tiring.

“Every step of the way we have to be on alert to figure out what’s going on. But it’s a massive endeavor, especially now. What’s happening at the national level, and then COVID — yes. It’s amplified to the — how would you say? — power of a thousand,” Salazar added. “It’s incredible. And that’s why I’m trying to put out so much information.”

In the first several days of voting, nearly 20,000 people statewide voted in person or sent absentee ballots. Statewide, 334,672 people had requested an absentee ballot as of Friday morning.

U.S. Postal Service officials and Secretary of State Maggie Toulouse Oliver have assured the public that voting by mail is a safe and secure way to cast a ballot during the pandemic.

But President Donald Trump has repeatedly called into question the integrity of the process and even called on supporters to police polling locations. The latter call spurred fears among Democrats and others that Trump supporters might try to intimidate Democratic voters, sparking conversations between elections officials in New Mexico and the state Attorney General’s Office and other members of law enforcement, said Alex Curtas, a spokesman for the secretary of state.

Trump and others have talked about the nation’s election process “in a way that is frankly ignorant of the actual ways and procedures that are in place,” Curtas said. “It does real harm. The president shouldn’t just be telling armies of people to go watch the polls. That’s not helpful for anyone.”

Bernalillo County Clerk Linda Stover and Salazar said they’ve had conversations with local law enforcement similar to those the Secretary of State’s Office has had.

The fiery political atmosphere has turned glitches and misunderstandings into suspicion of voter suppression and has the power to continue to fuel concerns, elections officials say.

In Santa Fe County, voting machines were not at first programmed to allow people who’d already requested an absentee ballot to instead vote in person. Salazar said the problem was corrected by 11:30 a.m. Tuesday, the first day of early voting, and the line was flowing smoothly by that afternoon.

But moments like that amid intense concern over the process are spurring people to pepper clerks with questions, Salazar said.

Salazar said she likely will open all of the polling locations in Santa Fe County as a result of concerns over voting by mail. The county had limited locations open during the June primary as a pandemic precaution.

In another example that fed fears online of voter suppression, several voters were turned away in Roosevelt and Curry counties Tuesday when they tried to vote in person after requesting an absentee ballot. Clerks said they weren’t at first aware of a 2019 election law change that no longer requires voters to surrender their absentee ballot to cast a regular one if they sign an affidavit swearing they will not send the absentee ballot.

Roosevelt County Chief Deputy Clerk Nathalia Baca said it was a simple mistake on her part because she wasn’t aware the law had changed.

But the issue led to frustration from one voter and fueled concerns that the largely Republican counties were trying to suppress Democratic voters. A bus with a Trump insignia also was parked more than 100 feet from a Clovis polling location and there were reports that the Fox News channel was on at the poll, Curtas said.

After a phone call, an office worker switched off the broadcast and both counties began allowing voters who’d already requested an absentee ballot to vote in person.

State chapters of Common Cause and the American Civil Liberties Union also have launched an election protection program to help ensure no one is unfairly or unlawfully turned away from the polls.

The biggest challenge for county clerks across the state might just be the sheer volume of people showing up to vote in person and the massive flood of ballots being mailed in while trying to ensure safe and clean polling locations as COVID-19, the disease caused by the novel coronavirus, continues to spread, said Bureau of Elections Director Mandy Vigil.

During the 2008 presidential election, New Mexico saw a 56 percent voter turnout level. In 2016, it was 62 percent. Despite the challenges, Bernalillo County’s Stover said she expects 2020 voter turnout to surpass that.

“I’m sure that we are gonna break every record that Bernalillo [County] has ever had in an election, be it a primary or a general election,” she said. “We broke those numbers in the primary.”

This article is ridiculous and ginning up even more uncertainty. Instead of reporting "conflict," especially when it comes to the nuts and bolts of how our elections are run, please report the FACTS.

The law you're looking for to explain how a voter may cancel their Absentee Ballot and vote in person is section 1-6-16 of the Election Code, amended by the 2019 Election Laws 50-Year Tuneup bill, HB407.

If the polling place has "has real-time synchronization between the early voting locations and the qualification of mailed ballots," the voter, after signing the affidavit that they will not return the original mailed ballot, shall be given a regular ballot and it will be fed into the regular tabulator. Only if the polling place does not have real-time access to the database to ensure the mailed ballot was not returned would the voter have to use a provisional ballot.

This is a change from previous elections, when voters had to sign a statement swearing that they never received the mailed ballot, and then would vote provisionally to make sure two ballots were not submitted.

Provisional ballots are counted by the Canvass Boards, about a week after the election. If they are qualified as valid, they ARE counted and added to the official totals. The results totals you see on election day are *always* preliminary.

I was told by the Secretary of State’s Office in an email that indeed your vote is provisional and counted last if you change your mind and vote in person instead of casting your mail in ballot.Can someone at the New Mexican please find out the truth and publish it in the newspaper. This is clearly an issue worth reporting. People are confused.

Yes the ability to sign an affidavit and vote in person after changing your mind about voting by mail was confusing. One Santa Fe county clerk employee told me they would be counted last but another told me no--your vote is counted immediately. Obviously Ms Salazar needs to give her staff updates on a law that passed a year ago.

I was pleased to see the line of dedicated voters at the SFCCC on the second day of early voting---by then it is usually just a couple of voters. STAY SAFE VOTE