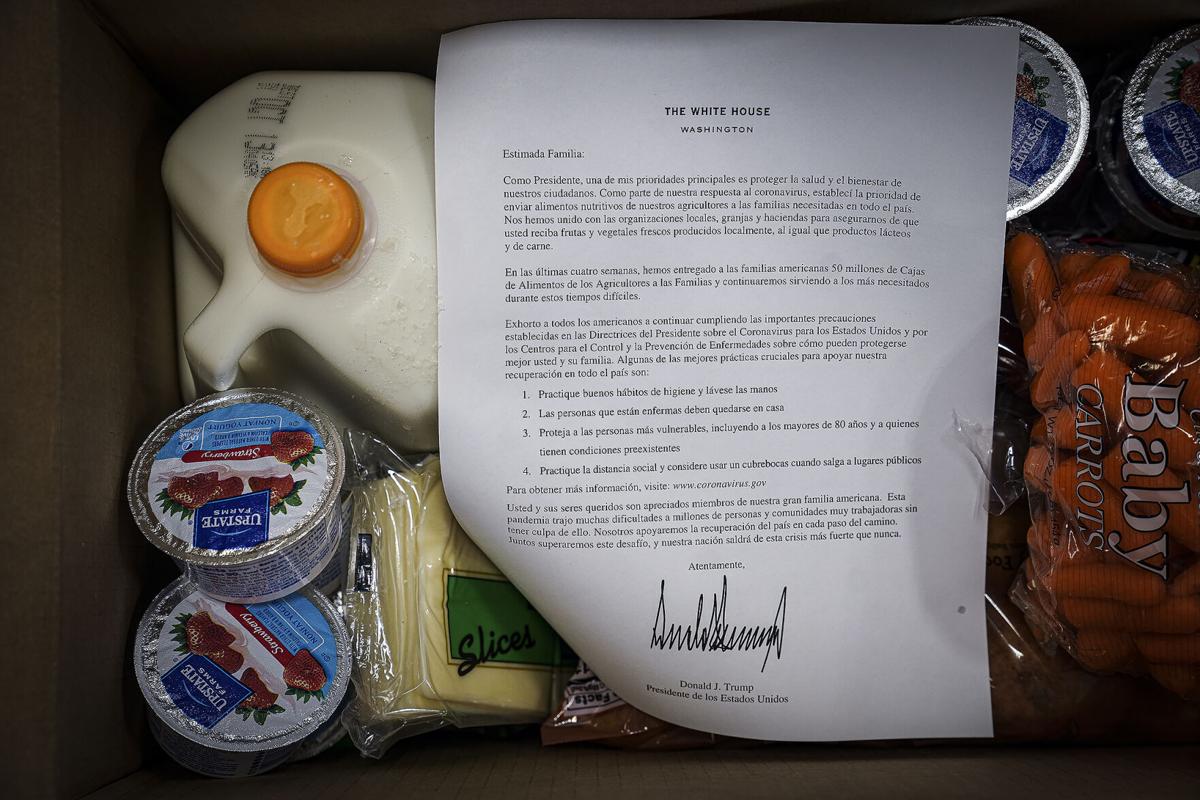 A letter signed by the president alongside an assortment of groceries at the Food Depot on Wednesday afternoon. The letters were sealed into thousands of boxes of food distributed to families across Northern New Mexico causing nonprofits to worry whether they are spreading a political message amid an election season. 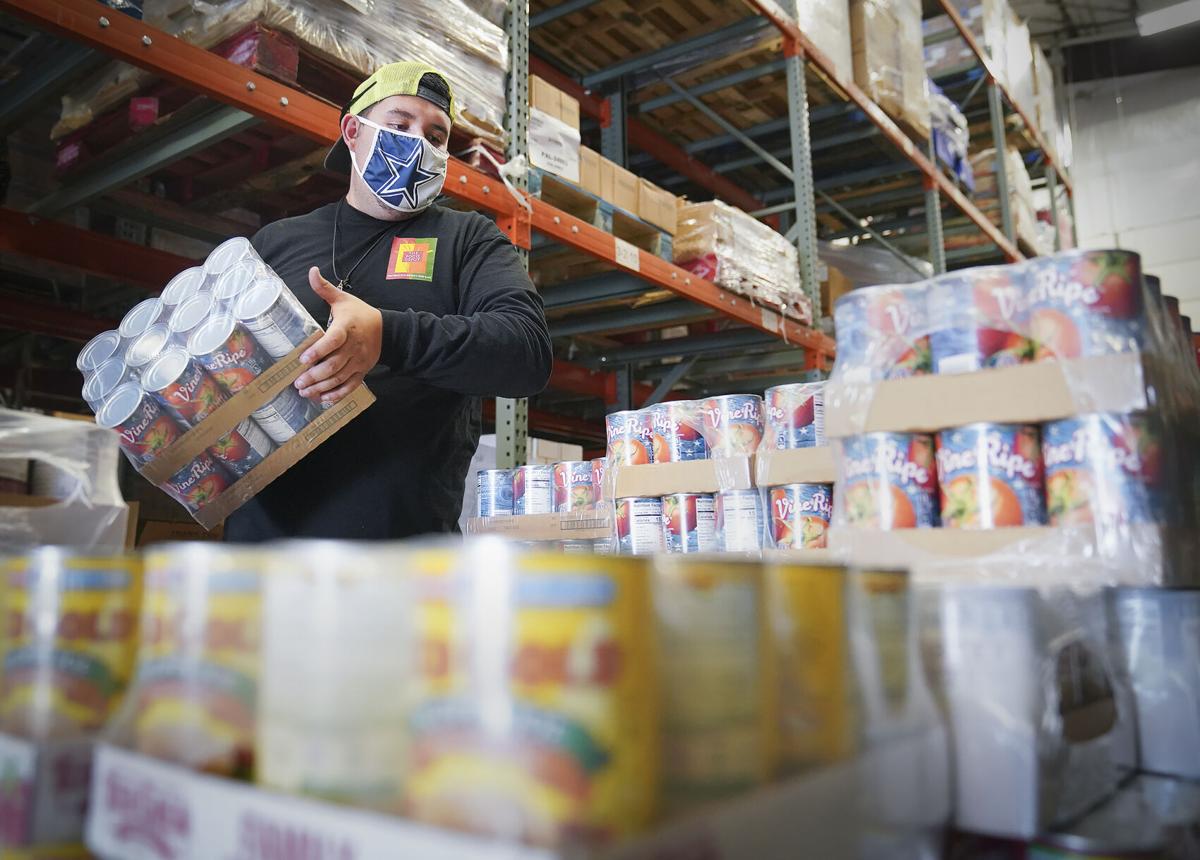 Jerome Sanchez stacks canned goods at The Food Depot in October. The nonprofit has seen high demand throughout the pandemic. 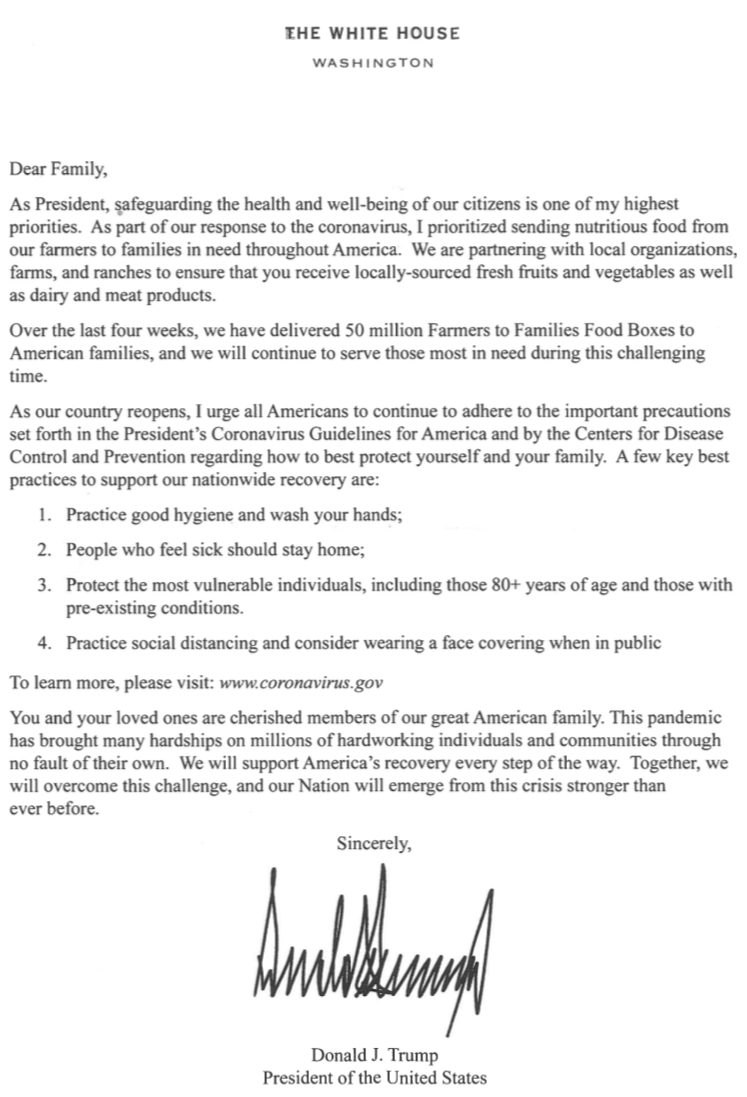 This letter from President Donald Trump is included in food boxes being distributed to food banks across the country. 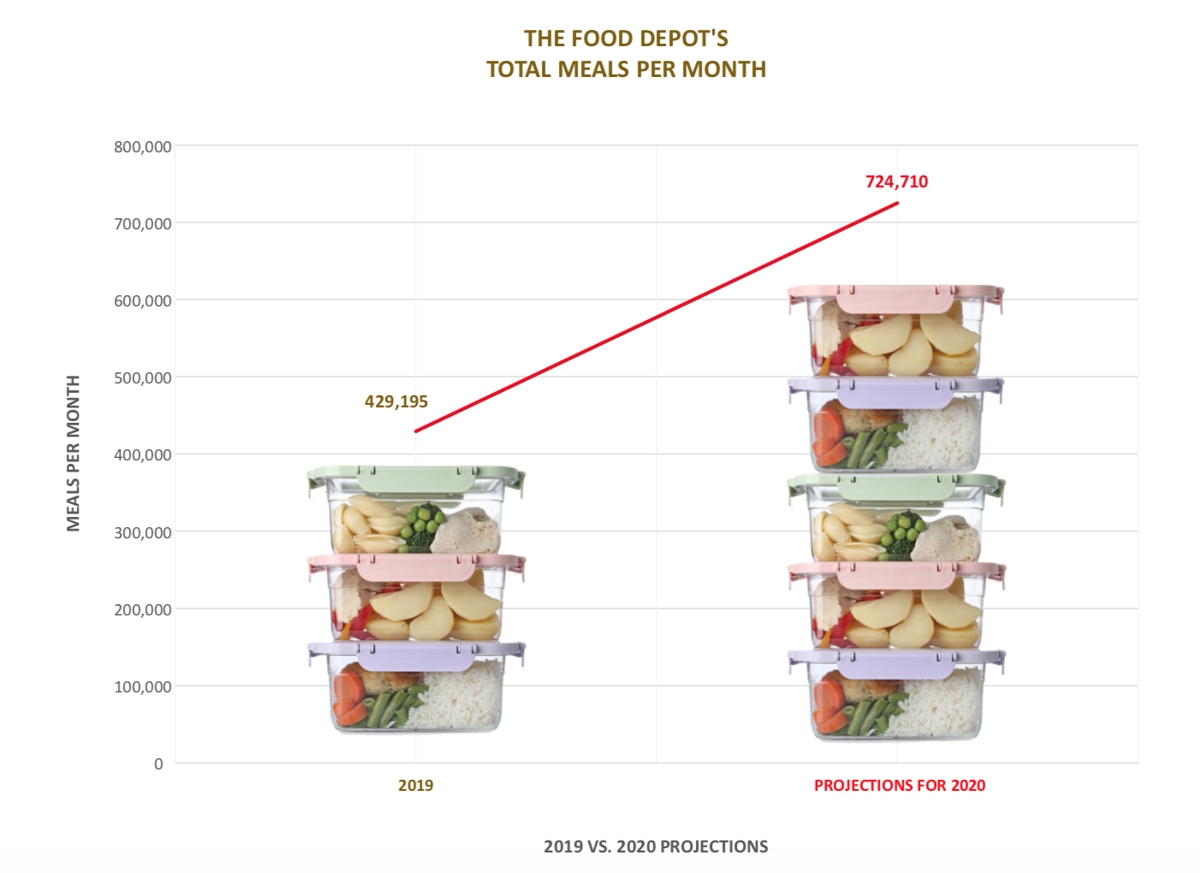 The Food Depot is experiencing a sharp increase in demand during the pandemic.

A letter signed by the president alongside an assortment of groceries at the Food Depot on Wednesday afternoon. The letters were sealed into thousands of boxes of food distributed to families across Northern New Mexico causing nonprofits to worry whether they are spreading a political message amid an election season.

This letter from President Donald Trump is included in food boxes being distributed to food banks across the country.

The Food Depot is experiencing a sharp increase in demand during the pandemic.

A letter signed by the president and sealed into thousands of boxes of food distributed to families across Northern New Mexico has nonprofits worried they're spreading a political message amid an election season.

Contractors with the U.S. Department of Agriculture that are distributing goods to food banks nationwide through the federal Coronavirus Food Assistance Program are required to include a letter in each box from President Donald Trump. The letter reads, "You and your loved ones are cherished members of our great American family. This pandemic has brought many hardships on millions of hardworking individuals and communities through no fault of their own."

In the letter, Trump, who recently tested positive for COVID-19, also urges Americans to "consider wearing a face covering when in public."

Jill Dixon, development director at The Food Depot, a regional food bank based in Santa Fe, said she had worried the organization would violate its charter with a parent group, Feeding America, by showing partisanship if it distributed the boxes to partner nonprofits throughout Northern New Mexico.

However, she said, it received clearance from Feeding America to move forward with distributions.

Still, the letter, which has generated controversy across the nation, has left her a little rattled.

"This is all deeply unfortunate because the focus has shifted away from our purpose — people in our community are hungry," Dixon said. "We have had to double our monthly food distribution during the pandemic. That's what is important. Hunger isn't political."

Pandemic-related assistance for families and businesses affected by the virus's economic toll has, however, become embroiled in politics, with Democrats and Republicans unable to agree on new relief measures.

On Tuesday, Trump publicly rejected a $2.4 trillion relief bill passed by the Democrat-controlled House of Representatives and said no aid packages will be considered until after the November election.

Through the five-week USDA food aid program, The Food Depot will receive weekly shipments of 4,000 25-pound boxes of food — mostly perishable vegetables, meat and dairy — that contain the Trump letter.

The nonprofit receives the boxes from Shamrock Foods Co., which secured the federal contract requiring it to include the Trump letter in each box.

The first boxes were distributed in Santa Fe and Taos last week.

So far, Dixon said, she hasn't received any questions from regional partners about the letter, although she expects she will.

While some food banks in the nation have said they are removing the Trump letters, The Food Depot doesn't have enough staff to go through each box and take out the letter, she said, especially as demand for food assistance increases during the pandemic.

"Our capacity doesn't allow anything close to that," Dixon said.

In 2018, The Food Depot said 23 percent of children in its nine-county service area in Northern New Mexico experienced food insecurity, meaning they lacked consistent access to sufficient food. The nonprofit projects that number will jump to 33.7 percent in 2020. It has been distributing the equivalent of more than 724,000 meals per month this year, up from around 429,000 per month in 2019.

Despite the Trump letter, Dixon said, "We're really excited about these boxes. They contain some perishable foods that food banks aren't always able to provide.

"Our sole purpose is to feed hungry families, so we really don't need to be distracted by this controversy right now."

• For more information about The Food Depot, or to find out how to help, visit thefooddepot.org.

Add a second letter from Pelosi on behalf of the House

This letter in no way promotes political advertising. Many people are so full of hate for Trump that any little excuse to bash him is used. Most likely if a similar letter had been included by Obama, Clinton, or any past president it would have been applauded.

In keeping with the nonpolitical agenda of non-profit food banks around the country, can we PLEASE not get caught up in an informative letter from the federal government on ways to stay safe during this pandemic? Unfortunately, the media is focusing on the controversy and not the Farmers to Families Food Box Program which not only supports our U.S. farmers & distributors, but is getting fresh & nutritious food to those who need it most. The program is helping to fill the hunger gap in our communities through their truck to trunk distributions. What have YOU done during the pandemic? Please consider becoming a volunteer at The Food Depot — it’s FUN & rewarding -- people will feel the impact of your work every day![thumbup]

This is really no different than the stimulus check letter signed by Mr. Trumpf that the IRS sent out. It's all about appeasing his insatiable appetite for applause and recognition. He's nothing but a very low IQ narcissist and it's absolutely disgusting.

In the Michael Cohen, Bob Woodruff, Kenny Smith (assistant to the Homeland Security Director), General H.R. McMaster (National Security Advisor), etc. books---they talk of a willingness to please Trump at all costs even if it violates the law or rules that have existed for the last 60 years. Plus some of the junior staff (we are now on the third and fourth string quarterbacks) have never worked for the federal government. This is one of those cases. Apply it across the board and in health care that is dangerous----pandemic response, the national weather service (nuke the hurricane and sharpie gate), defense (the botched job in Syria).

This is absolutely despicable just like DT throwing paper towels at the struggling impoverished Puerto Ricans....this monster could care less if the majority of struggling Americans live or die....his fake Christian base also....it should be stopped immediately! Do he, Jared and Ivanka think Americans are so stupid to not see thru their corruption? How about pay your fair share of taxes Trump family....Maybe the families with children and senior citizens could have more than one meal a day....

Helping needy people with volunteers and a shoestring budget is hard. To see tax resources poured into political advertising filled with utter BS is just offensive. Anyone who misses the political thrust of these letters is being willfully ignorant.

The letter is an advertisement for the present administration during election season and may violate the Hatch Act. The letter is coercive, because it links the USDA distribution to the President, when it is Congress that is responsible for appropriations. The president tweeted a day ago that he does not wish to negotiate stimulus relief to address the crisis.

So what is so political about this letter. It basically states that they are committed to helping folks through this not "vote for me." After all that is the currant administration.

What if Obama did it

President Obama has ethics and BTW isn’t running for office.

What's political about it? Seriously? Wow!!

Seems like it would be easy to put stickers on the food boxes explaining that the food bank is non-partisan and had nothing to do with the letters enclosed in the boxes.

It's not like he wrote the letter himself, its a letter someone on his staff wrote for him, on the back of the page its in Spanish so you know he didn't have anything to do with it.