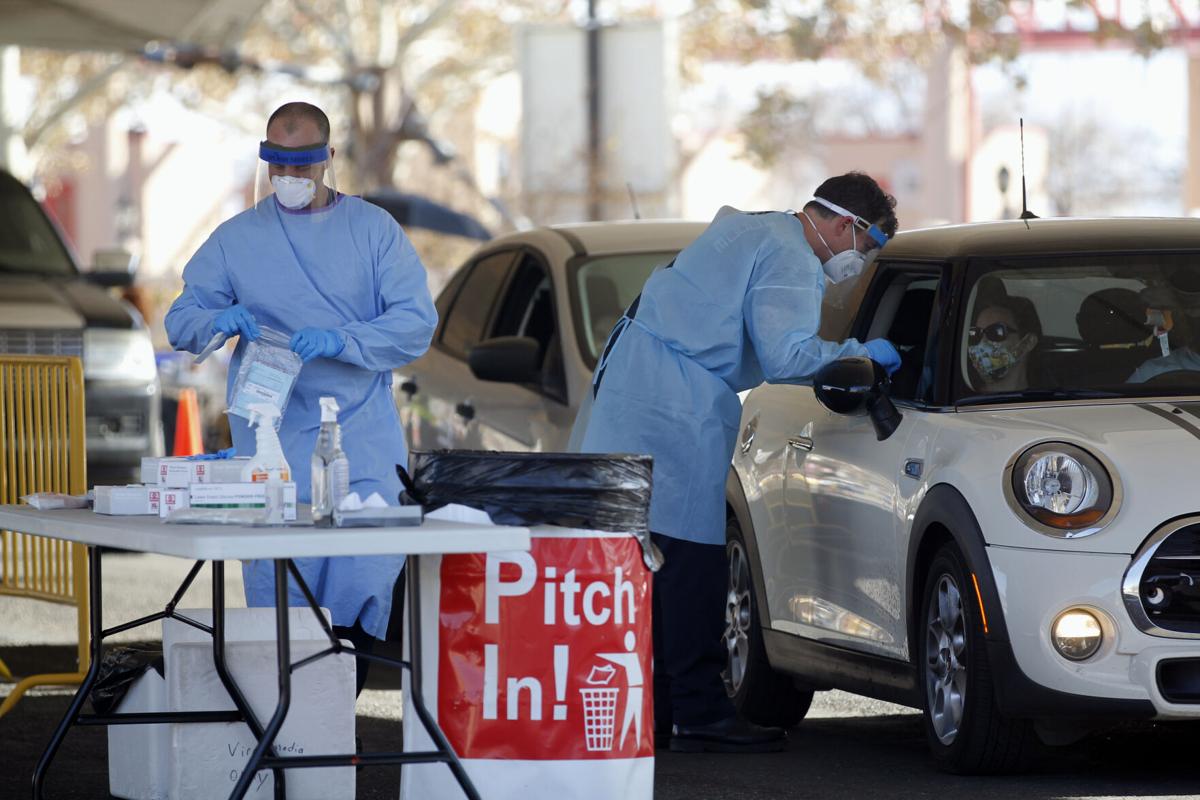 The state Department of Health conducts COVID-19 testing Friday at Expo New Mexico in Albuquerque. State employees from other agencies unrelated to health care, and as highly ranked as Cabinet secretary, were training to help out at the testing site. 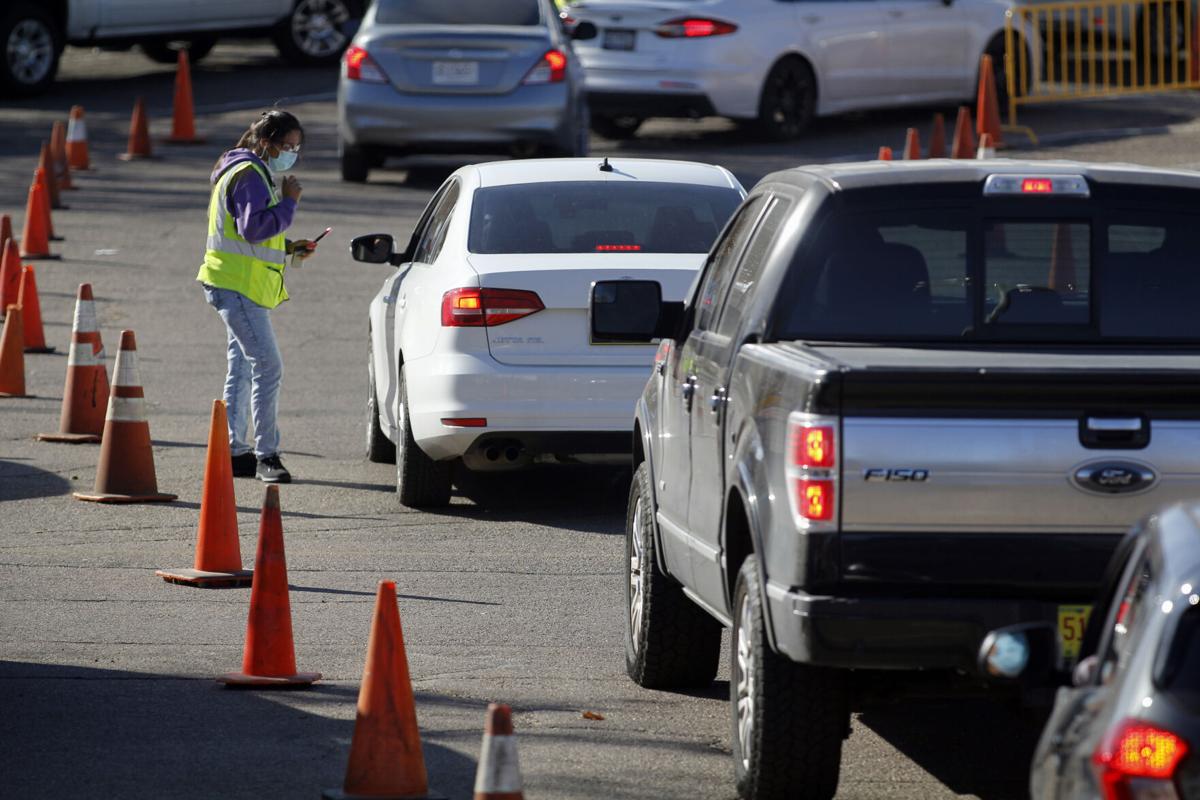 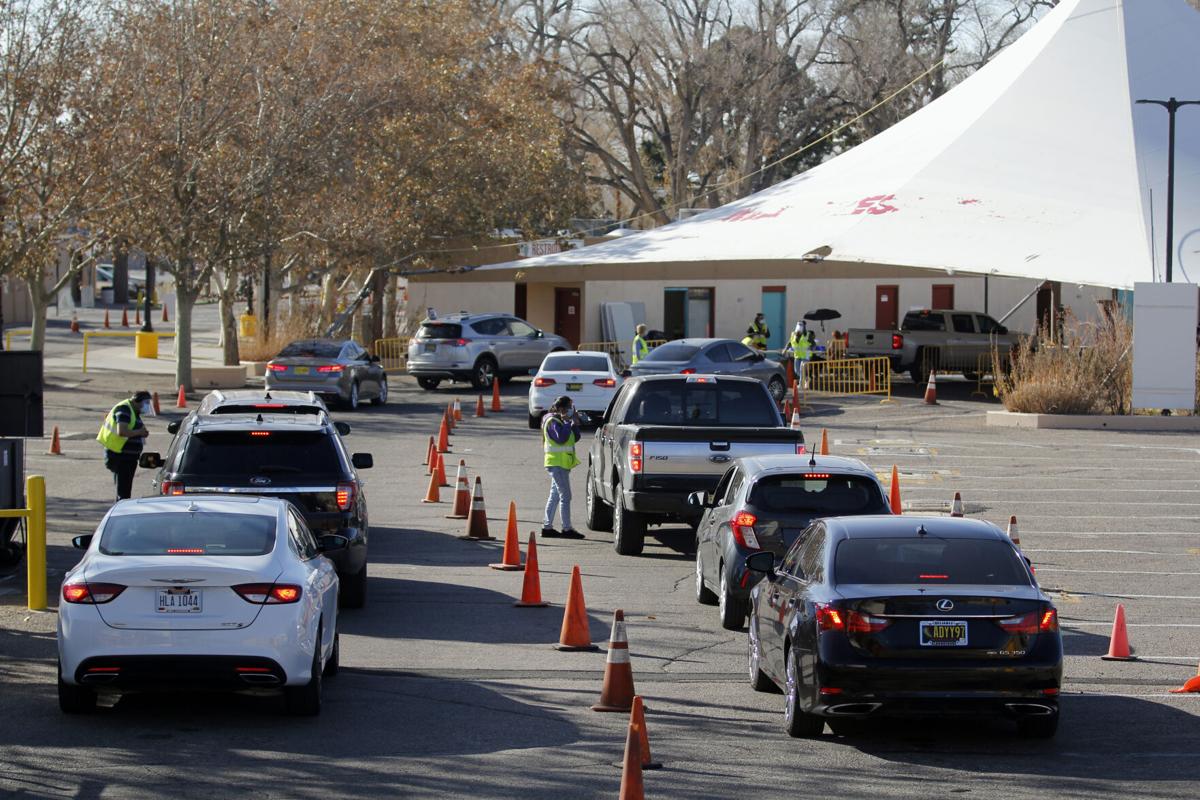 State workers who aren't medical professionals were being trained to help out with support work Friday at the COVID-19 testing site at Expo New Mexico in Albuquerque.

The state Department of Health conducts COVID-19 testing Friday at Expo New Mexico in Albuquerque. State employees from other agencies unrelated to health care, and as highly ranked as Cabinet secretary, were training to help out at the testing site.

State workers who aren't medical professionals were being trained to help out with support work Friday at the COVID-19 testing site at Expo New Mexico in Albuquerque.

Bill McCamley was giving a report on the state’s unemployment situation when he suddenly announced he was going to work an extra day this weekend.

“The state’s asking all employees to help with [COVID-19] testing,” the secretary of the state’s Workforce Solutions Department told members of the Legislative Finance Committee on Friday morning during a budget presentation. “Employees at different state agencies, myself included, are going to training today.”

He shortly left the meeting to undergo instruction at Expo New Mexico in Albuquerque.

As the number of COVID-19 cases rises — there were 2,993 on Friday with 23 deaths, including two in Santa Fe County — officials are looking for ways to increase testing opportunities. Toward that end, the state Department of Health asked workers from other state agencies to help.

Those who aren’t medical personnel, such as McCamley, will not be giving tests but are being tasked with much-needed support duties: opening test kits, unloading boxes, running test results to medical personnel and managing traffic, said Marisa Maez, a spokeswoman for the Department of Health.

“They’re out there in the trenches doing what they have to do to make sure that everybody is getting tested,” Maez said.

She said state workers who offered to help will be paid — unless they are exempt employees like McCamley.

Employees and Cabinet secretaries from other state departments — including Cultural Affairs; Taxation and Revenue; General Services; and Children, Youth and Families — offered to help, Maez said.

“It doesn’t matter what their title is,” Maez said, noting Billy Jimenez, acting secretary of the Department of Health, also is a volunteer. “People are stepping in.”

During her weekly briefing on the pandemic, Gov. Michelle Lujan Grisham said there aren’t enough medical professionals to administer tests as more and more New Mexicans request them.

“We don’t have the people to do that,” the governor said Thursday. “When you have an exponential increase [in virus cases], we run out of the necessary people to carry out operations like testing and getting information to the laboratory and making calls for contract tracing and navigating placement for people in units.”

Officials also need more people to conduct contact tracing. Maez said the state recently posted employment opportunities for contact tracers and received 500 applications. But she said it takes time to train those workers, unlike the one-day training for state employees learning how to support those conducting the tests.

“Demand is high,” for those workers, she said, referring to contact tracers. “I imagine the process [of hiring] would go quickly.”

Of the roughly 200 state workers who are helping in various pandemic assistance tasks, some have already been trained to help with contact tracing.

The Department of Health can process about 3,000 test results a day, Maez said. She said there are nearly 95 test sites in nearly 30 counties around the state.

She said the state employees helping with testing will be in full personal protective gear.

For McCamley, the job is traffic control. In his training on Friday, he learned all about directing vehicles, checking to make sure drivers were wearing masks and placing traffic cones in the right spots.

Over the summer, when his department was overwhelmed with calls from New Mexicans who needed help with their unemployment benefits because of the pandemic, McCamley said employees from other state agencies stepped in to help.

“For anyone who makes a comment about state employees being lazy or not willing to step up — it’s false, a lie,” he said. “This is a real testament to how much they care about their neighbors and communities. If we want to make sure everyone who wants to be tested gets tested, these are the things that need to be done.”

Since those state workers are on full pay, with their offices shut down, they shouldn't have to volunteer to help out, they should be directed to help out.

My experience with trying to contact "teleworking" state employees is pretty dismal. Makes me think they are having a paid vacation at home. Is anyone actually checking to see whether they are "working"? I suspect not...

As for Contract Tracing, it seems a continuing problem. Incompetent management the likely cause. Lots of tests w/o adequate contact tracing, not a whole lot of good.

Our chronically dysfunctional government seems unable to cope. Lacking an adequate Dept of Health leader for the past year, due to MLG malfunction, certainly a part of the problem.

NM really MUST get serious about fixing this ridiculous government. Aren't we tired of always having the WORST government in the nation??

I have been scientifically skeptical since the start of the pandemic about the efficacy of all the testing. I can see the numbers keep the public health bureaucrats and politicians busy, but I do wonder what it is that motivates so many people to be tested. It is but a snapshot in time, and only proves you don't have it that moment you were tested.

I can see people who work and are required to have tests, often it seems, but given the long delays to get results (many days to 2 weeks), contact tracing can't be very effective in stopping any spread. So why do other people line up for hours, among possibly diseased people, to get a test that is highly likely to be negative? If you have symptoms, why not just stay home and if it is bad, go to the hospital, they will test you there. I just don't get it, what does testing do for most people?

Even the Guv says this about using testing to travel or go anywhere: "Because of the long incubation period and the fact that you can be contagious without having any symptoms, getting a COVID-19 test just prior to Thanksgiving doesn't ensure anyone's safety."

Thank you to all of the front line workers who are helping us to get this horrible virus under control. From the staff conducting the testing, first responders, our hospital staff, doctor's offices, and clinics. I have 2 acquaintances that have been hospitalized this week. It hurts when it actually affects someone you know. The very least we can do as a community is quit complaining and follow the rules. Our resources are at their limit.

What’s going on across the state with contact tracing? Are we doing any at all and how effective is it given the huge jump in new cases?

Given the many days to 2 weeks delay in results, contact tracing is useless, and the surge proves that.

This has long been a problem, which our media doesn't report. We have the capacity to run tests, due to labs recent, pre-Covid, acquisition of new equipment, but our chronic, and far too typical, mismanagement can't organize the process. And, at the top, Captain Queeg, shouting conflicting orders. It seems we elected the wrong Governor... darn.