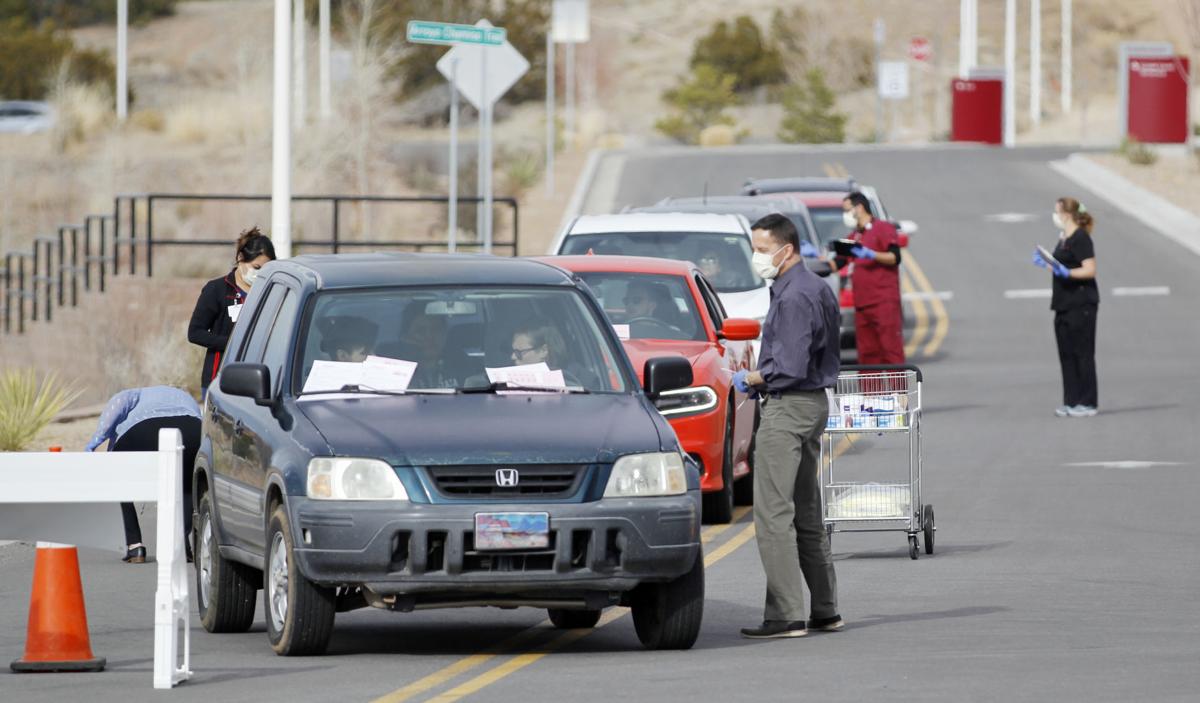 Presbyterian Hospital staff run a drive-thru coronavirus screening service Tuesday. Those who want to be tested are urged to be screened by phone or online first, as more than 40 percent of people who show up don’t meet the requirements to be tested. 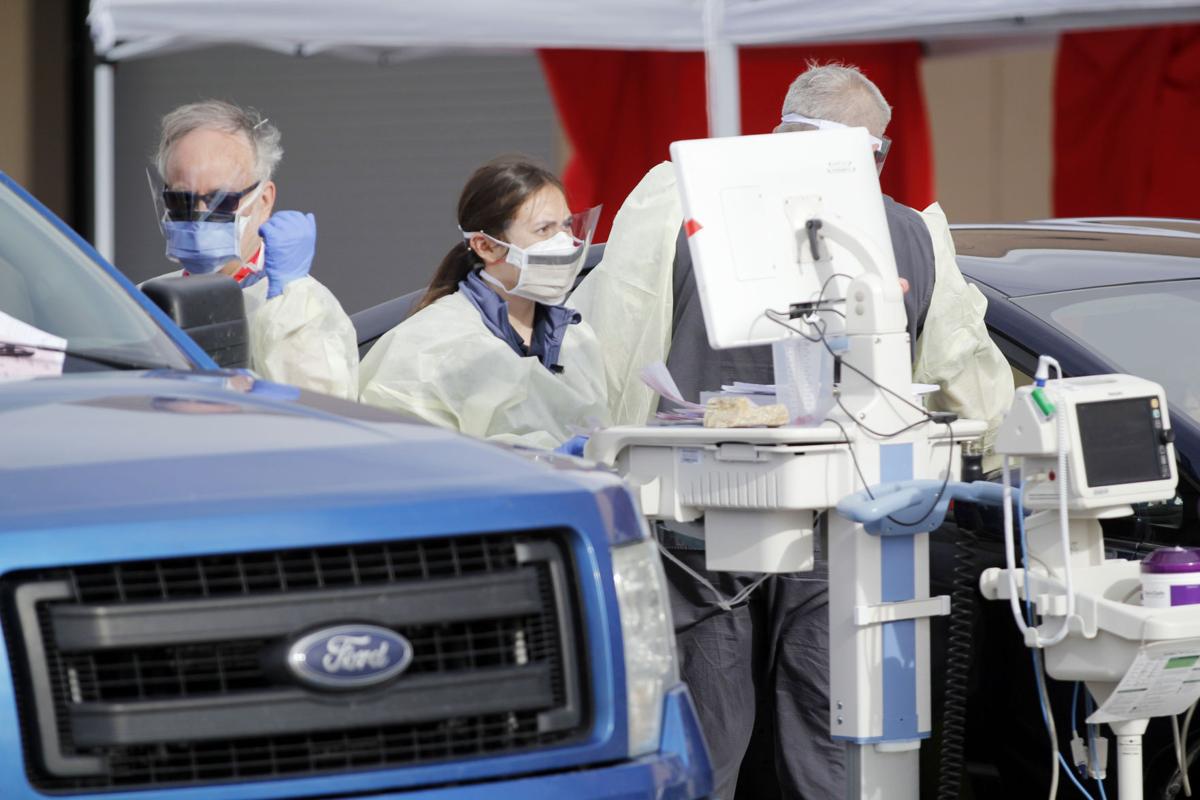 Presbyterian Hospital staff run a drive-thru coronavirus screening service Tuesday. Those who want to be tested are urged to be screened by phone or online first, as more than 40 percent of people who show up don’t meet the requirements to be tested.

As increased numbers of cars lined up in Santa Fe and Albuquerque for novel coronavirus tests Tuesday, efforts were afoot in New Mexico to try to increase the state’s testing capacity.

The state’s Health Department said it’s planning to open COVID-19 testing sites of its own later this week as well as expand its testing operation to 24 hours a day in an effort to boost access. Meanwhile, a private lab said it was exploring new ways of increasing the number of tests it can perform daily.

More access to testing appeared necessary as Lovelace Medical Center closed its drive-up site Monday “due to overwhelming demand and limited resources and supplies,” and around 700 people arrived at Presbyterian Hospital’s drive-up site Tuesday in Albuquerque, an increase from 525 the day before. Some 50 cars were lined up around midday at the provider’s Santa Fe facility. At the same time, the state reported two more positive cases of COVID-19 on Tuesday: a man in his 50s in Taos County — that jurisdiction’s first reported case — and a man in his 40s in Santa Fe County — the county’s fourth case. The new positive cases brought the state’s total to 23. Bernalillo County, New Mexico’s most populous by far, still has the highest number of cases at 14.

Two people who have tested positive were hospitalized as of Sunday but were in stable condition, according to the Governor’s Office. As of Tuesday, no one in New Mexico had died of COVID-19.

As in previous days, there were plenty of newly announced closures as well: The New Mexico Supreme Court suspended all criminal jury trials that have not started; Nusenda Credit Union temporarily shut its lobby in Taos after a person who visited the branch later tested positive for the coronavirus; and all Santa Fe cinemas are now closed.

Amid the influx at its drive-up sites, Dr. Darren Shafer, Presbyterian Medical Group’s executive medical director, urged people to get screened for free at home before deciding to go to a testing site, given that only about 40 percent of people who arrive at drive-up locations actually meet the requirements to get tests.

“This way people aren’t going to these sites thinking that they need testing, and then it turns out they didn’t need testing after all,” Shafer told The New Mexican.

People can do that, he said, by calling the state’s coronavirus hotline at 855-600-3453 or by going to Presbyterian’s website, www.phs.org to fill out a form, or setting up a video call.

To be tested at Presbyterian, people need to exhibit COVID-19 symptoms, have come into contact with someone who tested positive for the virus, or have visited one of the CDC recommended travel areas that necessitate testing.

Lovelace said Tuesday it would “notify the community if and when the drive-through testing site re-opens,” and encouraged patients with questions to call the state hotline.

The total number of coronavirus tests reported in New Mexico nearly tripled over the past two days — from 583 on Sunday to 1,720 on Tuesday. But Gov. Michelle Lujan Grisham and state health officials are trying to ramp up testing capacity even more.

New Mexico has the ability to test about 600 people per day at the moment, with that number roughly split between the state’s own lab and an Albuquerque lab run by TriCore Reference Laboratories.

Shafer said while Presbyterian has the capacity to evaluate about 1,000 patients per day, it relies on TriCore to run its tests in its lab, and TriCore currently only handles around 300 per day. It takes between 24 and 72 hours to get results back, he said. “Where we run into challenges is the current capacity with laboratory testing,” Shafer said. “That means there’s a delay in how people are able to have the results of their tests run.”

TriCore said Tuesday it was working on ways of expanding its efforts. “We are actively exploring multiple high capacity testing platforms that would increase capacity for the state,” the company said in a statement. “We are not in a position to share a possible increase in capacity, as there are many factors that go into that calculation.”

One possibility, TriCore said, could be to use its molecular diagnostics machine known as a COBAS 6800 for coronavirus.

The machine is operational, but TriCore lacks the necessary reagents to use it specifically for COVID-19 tests and hasn’t been able to purchase them from the pharmaceutical company Roche, said Steven Jenison, acting deputy health secretary.

“My understanding is that machine can run 1,000 samples in a batch, which is amazing,” Jenison said in an interview. “That’s a very good throughput and would significantly improve the state’s capacity for running tests.”

The state’s inability so far to secure those materials led Lujan Grisham to urge President Donald Trump on Monday to do more to help states like New Mexico obtain resources to fight COVID-19, the Governor’s Office said. In a follow-up call Monday, Vice President Mike Pence reportedly assured the governor that New Mexico would get what it needed to ramp up testing, Lujan Grisham’s office said.

Still, Jenison said he didn’t know if TriCore would get what it needed to use the machine. “For every virus you’re trying to detect, you have to have a specific set of reagents for that virus,” he said. “And we have no indication of when or if we would be able to get a hold of that.”

The Department of Health is also exploring ways of ramping up its own testing. Currently, the state’s testing efforts have a capacity of between 200 and 300 tests per day, Jenison said. Health officials’ plans to expand testing operation to 24 hours a day, which they hope to do by the end of the week, could increase capacity to 400 to 500 tests per day.

As for the state-run testing sites the department aims to set up, Jenison said officials haven’t yet determined their locations, although they likely won’t be at hospital facilities. They would be “established fixed sites” and could be run in conjunction with other partners, he said. “Our intention is that when we set up test sites, which we are planning to do this coming week, we will try to make it so that the number of tests we offer is consistent with our current capacity to run them,” Jenison said.

You really need to specify Santa Fe COUNTY, instead of saying Santa Fe area. The ignorant people think it's been verified to be in the city itself, which it hasn't.

Thanks for the story -- good info on Covid testing in NM is hard to find. FYI, there does not appear to be any screening form on the Presbyterian web site given.

Wait a minute! Didn't our "stable genius" in the White House, President "I take NO responsibility", say that anyone who wants a test can take a test? He is putting his own base at higher risk with this standard gaslighting routine....wake up people!