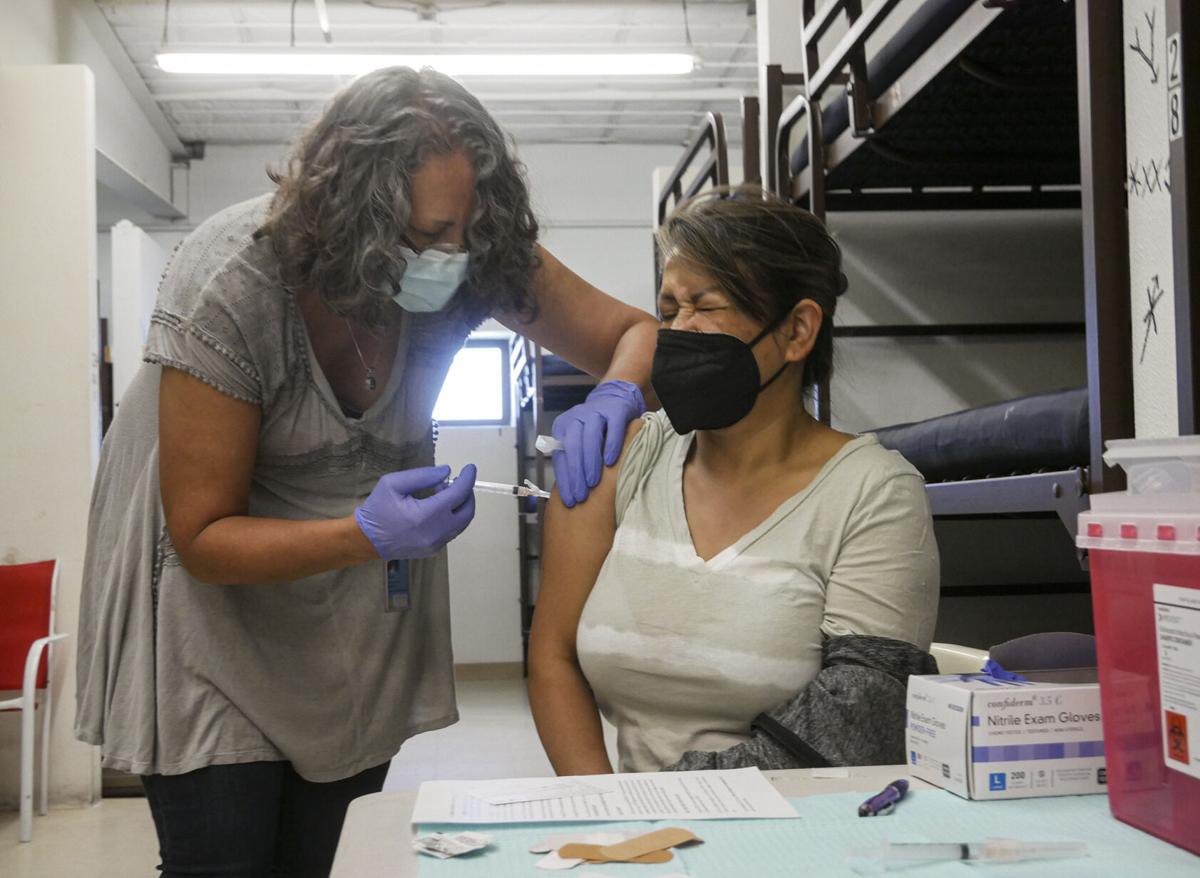 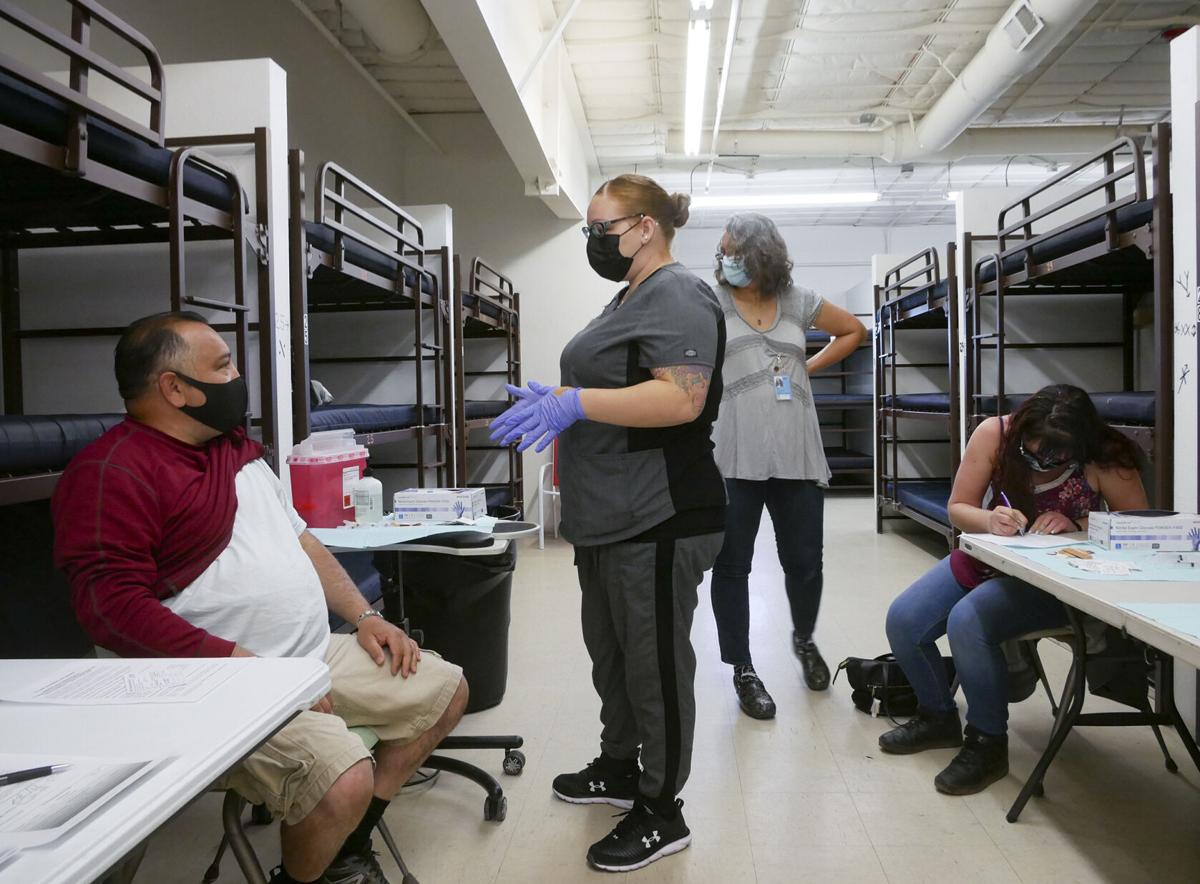 Tiffany Knibbs, a medical assistant with La Familia Medical Center, explains to Manuel Vigil the possible side effects of the Johnson & Johnson COVID-19 vaccine during a vaccination clinic Friday at the Interfaith Community Shelter at Pete's Place. La Familia only uses Johnson & Johnson in its homeless program because the one-shot regimen is simpler than trying to schedule the transient population for a second shot. 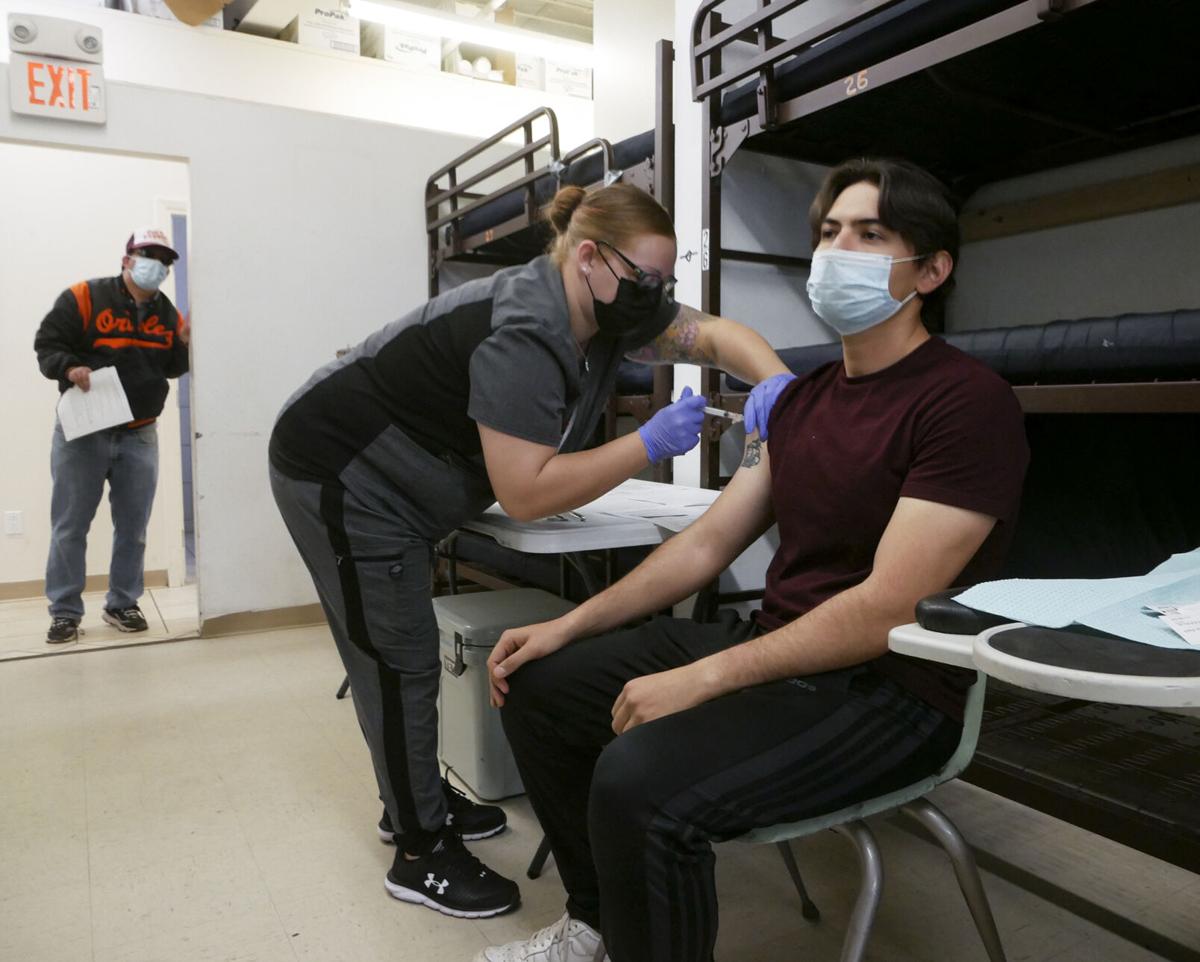 Jorge Sandoval receives the Johnson & Johnson COVID-19 vaccine from La Familia medical assistant Tiffany Knibbs on Friday as Gabriel Howell peeks through the doorway during a vaccination clinic at the Interfaith Community Shelter at Pete’s Place. 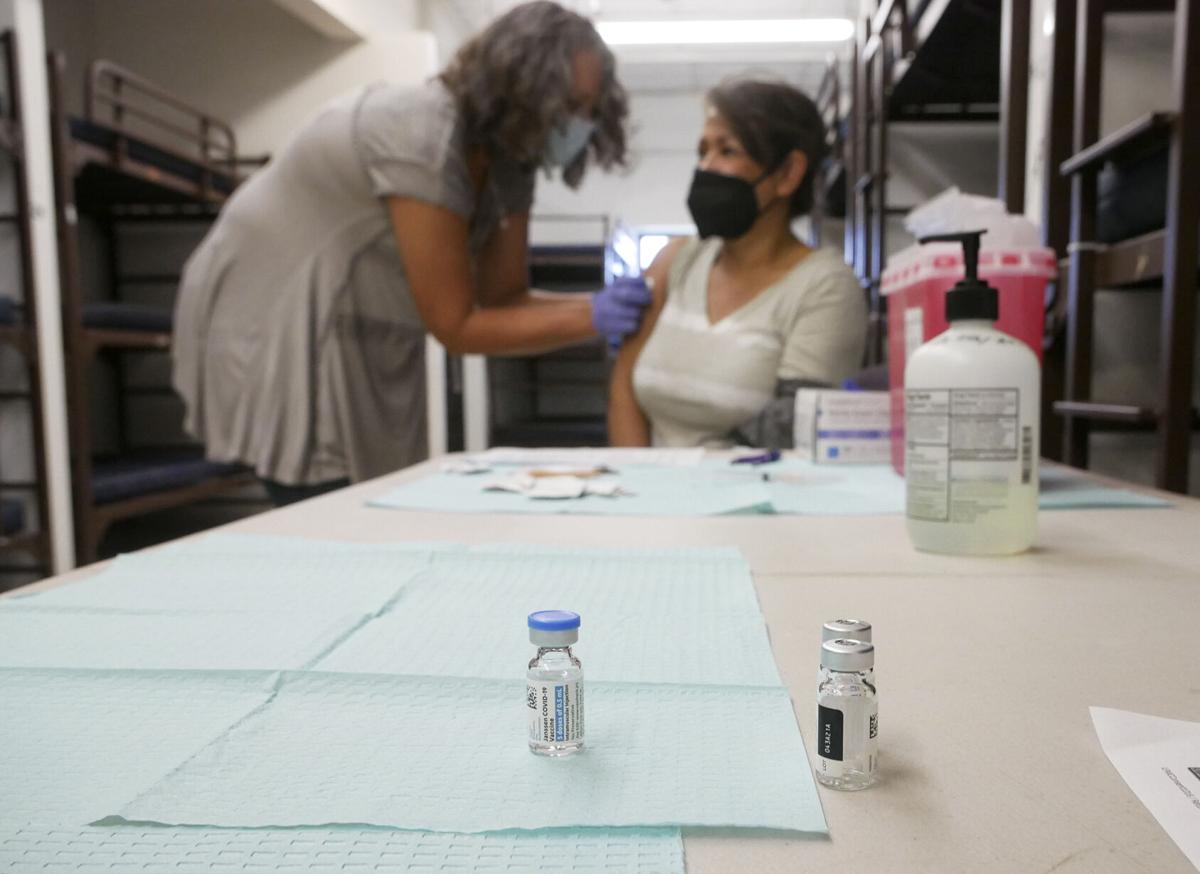 Tiffany Knibbs, a medical assistant with La Familia Medical Center, explains to Manuel Vigil the possible side effects of the Johnson & Johnson COVID-19 vaccine during a vaccination clinic Friday at the Interfaith Community Shelter at Pete's Place. La Familia only uses Johnson & Johnson in its homeless program because the one-shot regimen is simpler than trying to schedule the transient population for a second shot.

Jorge Sandoval receives the Johnson & Johnson COVID-19 vaccine from La Familia medical assistant Tiffany Knibbs on Friday as Gabriel Howell peeks through the doorway during a vaccination clinic at the Interfaith Community Shelter at Pete’s Place.

Orrin Blydenburgh felt a brief burning in his shoulder after he received a vaccine at a Santa Fe homeless shelter Friday.

Before the shot, he heard the standard warning that he might get a mild headache, body pains and flu-like symptoms, and if the side effects become acute, he should go to the hospital.

Afterward, Blydenburgh, 47, said he would rather endure the vaccine side effects than COVID-19 symptoms.

“The benefits outweigh the problems you can get from getting COVID,” said Blydenburgh as he stood outside of Interfaith Community Shelter at Pete’s Place.

Blydenburgh was one of about 20 people vaccinated Friday at the Interfaith Community Shelter at Pete’s Place. So far, La Familia Medical Center has inoculated about 370 people with the single-dose Johnson & Johnson vaccine through its Healthcare for the Homeless program.

As the state’s vaccine rollout gains momentum, the local nonprofit wants to ensure the medicines don’t roll past Santa Fe’s homeless population — most of whom lack the means to register with the state for immunization.

“We make it as easy as possible,” said Maria McMahon, a La Familia nurse practitioner. “We try to put up as few barriers as possible.”

La Familia only uses Johnson & Johnson in its homeless program because, given their transient lifestyle, the unhoused might not return three or four weeks later for the second shot that Pfizer and Moderna requires, McMahon said.

It works with the city, county and state on the larger outreach to homeless people who generally lack addresses, internet and even phones to register at the state’s vaccination website.

A La Familia team goes to places where homeless people hang out to tell them how they can get shots, McMahon said.

La Familia also contacts shelters, such as the Salvation Army, Esperanza and Casa Familia, so they can inform their occupants when and where they can get vaccinated, McMahon said.

The city provides transportation from these shelters to midtown and Pete’s Place, she said.

“La Familia has been a valuable partner in the city’s efforts to care for unsheltered people during the pandemic,” Santa Fe Mayor Alan Webber wrote in an email. “We’re grateful for their leadership and commitment to the health of all Santa Fe residents, especially those most in need.”

The state Department of Health coordinates efforts to make vaccines available to the homeless population, but shelters, pharmacies and health centers like La Familia often are the ones that get shots into arms, David Morgan, a Health Department spokesman, wrote in an email.

“So they’ve happily stepped in to vaccinate the full spectrum of New Mexico’s population,” Morgan wrote. “We do not want anyone excluded from the opportunity to vaccinate and protect their health. Our partners are making the difference.”

Not all homeless people are receptive to vaccines.

Some have medical conditions that make them hesitant, and others are fearful about getting an injection, said Joe Jordan-Berenis, Pete’s Place director.

“Some people outright don’t want to take it for whatever reason,” Jordan-Berenis said. “They personally feel it’s not right for them.”

Those who reject vaccination must take a rapid test to stay at the shelter, Jordan-Berenis said.

McMahon said vaccine hesitancy seemed to grow in response to Johnson & Johnson being paused over concerns that it may cause blood clots in some patients. After the vaccine was resumed, La Familia’s first vaccination efforts drew 10 or fewer takers, compared with the 50 people who typically showed up before the pause, she said.

However, about 20 people got vaccinated at Pete’s Place on Friday, she said, calling it encouraging.

“Time will tell, but it is picking up again,” she said.

Blydenburgh said he initially was going to get a Pfizer shot at a CVS Pharmacy but then decided to get the Johnson & Johnson vaccine because it’s “one and done.”

He said he wasn’t worried about the reported blood clotting because it mainly affects women. He said he knows people who refuse to get vaccinated.

“It’s all over fake news — the conspiracy theories and stuff,” Blydenburgh said.

Eric Bustos, 49, who was sitting outside Pete’s Place, said his vaccination last month went “pretty smooth,” with flu-like symptoms that lasted a day.

He said he wasn’t eager to get the shot but did it so he could stay at the shelter without the hassle of testing.

He also didn’t want to risk spreading the virus.

“It’s just something we all need to do,” Bustos said.

Good on you La Familia!