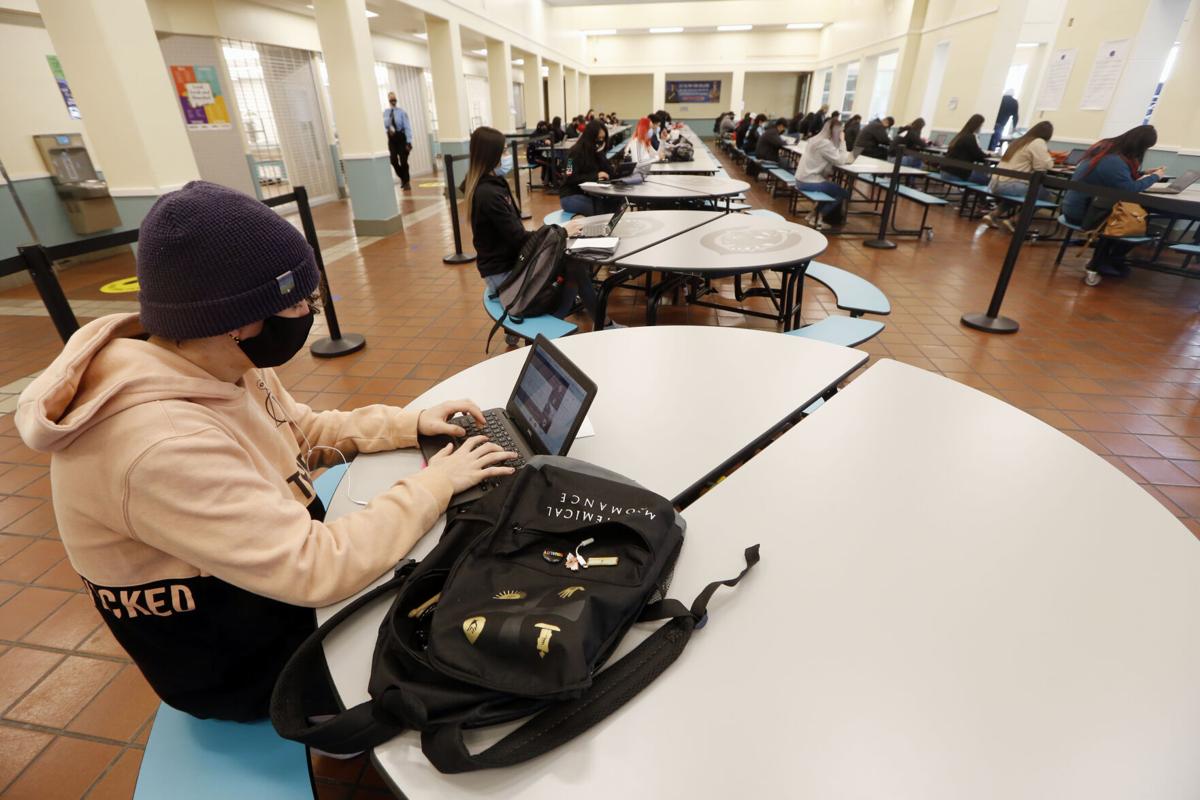 Freshman Logan Oakeley, 15, sits in the Capital High cafeteria Monday while logged in to band class. The school has returned using a 'flex' model — students are essentially using remote learning in the building and only have in-person classes with teachers who are conducting remote lessons from the classroom. 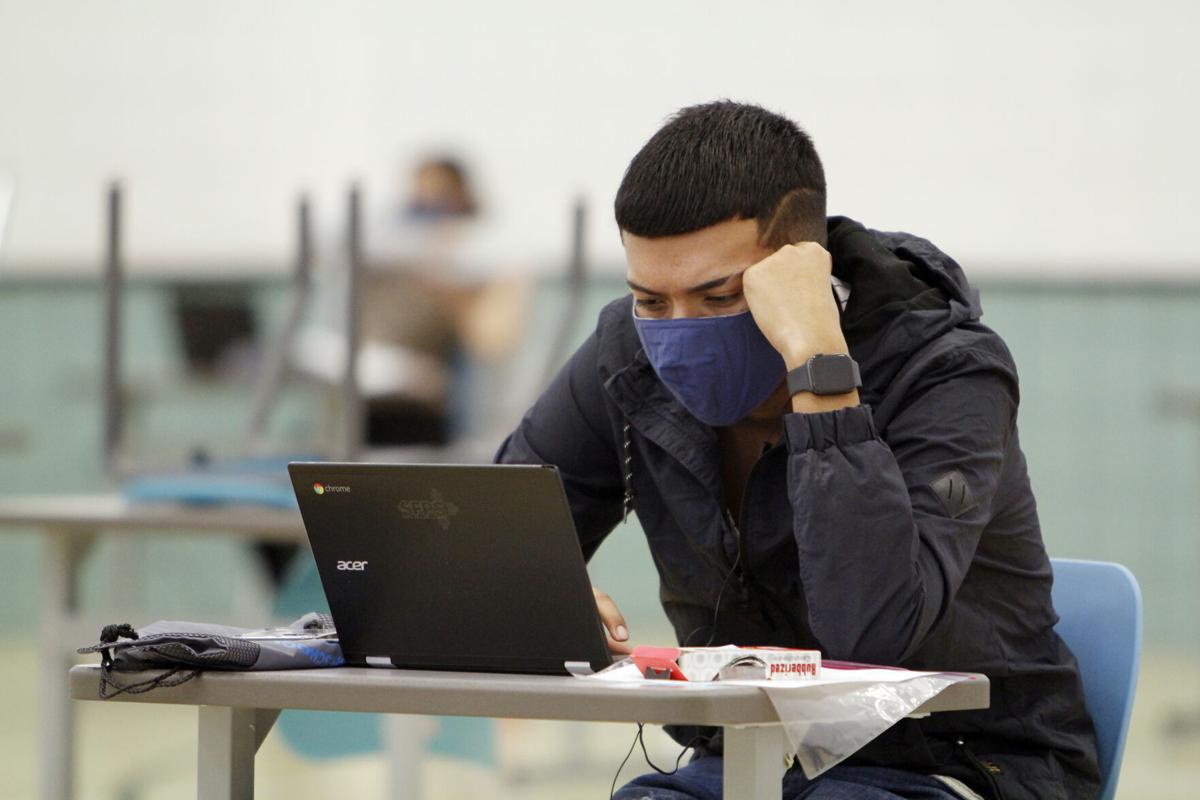 Senior Ramon Torres, 18, takes his English class Monday in Capital High's auxiliary gym. Torres said he found the experience weird after expecting at least some in-person instruction upon his return to school. 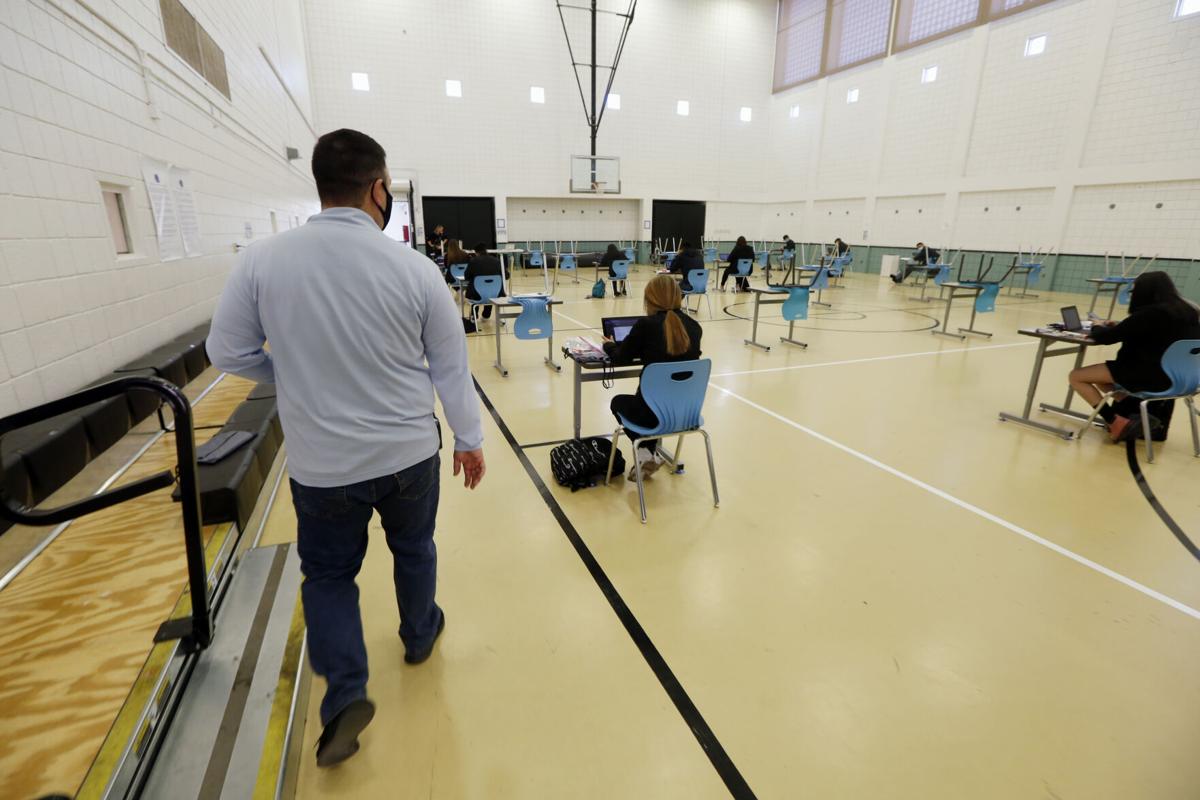 Freshman Logan Oakeley, 15, sits in the Capital High cafeteria Monday while logged in to band class. The school has returned using a 'flex' model — students are essentially using remote learning in the building and only have in-person classes with teachers who are conducting remote lessons from the classroom.

Senior Ramon Torres, 18, takes his English class Monday in Capital High's auxiliary gym. Torres said he found the experience weird after expecting at least some in-person instruction upon his return to school.

Those were three words Jaime Holladay didn’t want to utter Monday morning, but the Capital High School principal felt it was her duty.

The new rule came as she made her first announcement over the school’s public address system to students who had returned to campus for so-called hybrid learning. It was their first day back — and the first time Santa Fe Public Schools had opened all of its campuses — since March 13, 2020, two days after the state announced COVID-19 had been detected in New Mexico.

Holladay said she tried to make light of her “no hugging” edict, but it went against her own nature as a self-proclaimed serial hugger. In fact, she had to fight that instinct and force herself not to hug the first student who had lined up to enter Capital earlier that morning.

“It’s a challenge for me to not hug any of them,” Holladay said.

Avoiding hugs is one of many challenges students, teachers and administrators face as the district rolls out its version of hybrid learning, in which some students receive two days of classroom instruction each week, combined with three days of virtual learning from home. The number of students who can return to each school in the district depends on how many teachers and support staff have volunteered to work on campus.

Capital had 465 students express a desire to return to school, but only 28 teachers and support staff signed up to return. There were fewer than 200 kids on campus Monday.

Santa Fe High, in comparison, had 295 students sign up for hybrid learning, along with 55 teachers and staff members.

Both high schools chose to use a “flex” model and what the district describes as internet hubs. In what is essentially remote learning from inside the building, students log in to lessons from their laptops at socially distanced work stations.

They can only get face-to-face instruction if one of their teachers conducts a remote class from a classroom.

Quiet, masked students were set up at workstations in five large rooms around the Capital High campus — and that’s where they were expected to remain, except during 10-minute breaks between classes, at lunchtime or in the rare case when a teacher was conducting a lesson on campus.

Ramon Torres, a senior, described the experience as weird, adding he had assumed he would get some in-person instruction.

“I should have just stayed at home,” Torres said.

The students were given tote bags with the Capital logo as they entered the building, as well as plastic bags to hold headphones, pens, pencils and other items needed for remote instruction they might have forgotten.

The chatter at most internet hubs barely rose above a whisper Monday. Students wore headphones while listening to lessons or working on assignments.

The boisterous energy high school students often exude was mostly missing until lunch, when they congregated in Edward A. Ortiz Memorial Gymnasium to eat their meals.

Teachers and administrators monitored the gym to ensure students were maintaining social distancing.

Veronica García, superintendent of Santa Fe Public Schools, said all students were told what to expect at their schools. Still, she said she hopes more students and — more importantly — teachers decide to return to classrooms because that would change the learning model at a particular school.

“Maybe those students didn’t get to see their teachers [in person], but other students did,” García said. “It truly varies. I would imagine if I were a high school student, do you want to be supervised and not move around like you normally do if your teacher isn’t there?”

Liza Luna, a Capital junior, said she might not like the feeling of isolation at school, but she struggled to learn from home. She felt the in-person environment where there were teachers, staff and administrators present to help was a far better option.

“Coming back to school, it just feels better,” Luna said. “At first, I was like, ‘I don’t want to come back.’ With COVID, I was scared. But I talked to my grandparents and my family, and they all said it was better that I came back.”

Samantha Lozoya, a Capital freshman, said she found remote learning at home boring. She decided having the chance to meet fellow students was better than the alternative. Lozoya said she was surprised by the workstation setup, as desks were lined up 9 feet apart with no protective shields.

Holladay acknowledged the students’ complaints about boredom and said there are plans to conduct some on-campus activities to engage them more in the coming weeks.

“We held off on implementing any of that until we knew what it would look like with the students here,” Holladay said.

Torres said he thinks some students enrolled in the hybrid program will stop coming to school because the model isn’t much different than learning from home. But he added others will show up just for the chance to get away from home.

Count Torres in the latter group.

“At first [before the pandemic], I used to say I hated school and I started ditching,” Torres said. “Now that I was always home, I missed school because at least I wouldn’t be home all day and I could be with my friends.”

The print version of this article is front page above the fold. The headline is the first quotation from Mr. Torres, "I should have just stayed home." Did you have to espouse the negative point of view from this student up front and wait until the end of the article to include the more positive responses from other students? Furthermore, that same student also said "...I missed school because at least I wouldn't be home all day and I could be with my friends." What's the take-away supposed to be here besides more uncertainty? IMO getting students back on campus is a win for everyone.

At least doctors, nurses, caregivers, and grocery store workers get paid for all the hours they work. I know teachers who have worked many hours unpaid in the last year. They work during their legally required lunches. They work beyond their contract hours and for what? Teachers and their families have made significant sacrifices in the past year. Show some empathy and stop blaming them for symptoms of the pandemic.

Thanks for your thoughtfulness. I work crazy hours now and on weekends. I get up super early to upload activities for my students and stay up late trying to grade and keep up with the amount of work. It is not an easy job; it is very demanding and challenging now more than ever. [smile]

As the one student commented, "I should have stayed home." It's infuriating to learn what teachers consider as a "hybrid model"; on top of that it's only a few days a week. Why do teachers put themselves so much higher than doctors, nurses, caregivers, or grocery store workers? It's beyond maddening.

WHAT are you talking about? WE have to abide by district and state mandates, Vince. We are simply following orders. We did not devise a hybrid model; administrators did. You are using ad hominem attacks on a community (teachers) who are just doing what we are "supposed" to do...

Please let’s not call it a hybrid model. It is not, but it is better than keeping the schools closed. It is an internet hub which is great and should have been offered from day one of shutting down schools. From the beginning, many students needed better internet and a quiet place to study. After almost a year at home, most have resolved this issue or got too comfortable being home whether they are succeeding or failing their classes. I don’t know who to blame for taking so long to realize the importance of opening the schools even as internet hubs. Is it PED or local school districts? Students that are failing need to be asked to come to school now, not be optional. Even if all they are getting is an internet station. It will give them structure and time management skills at least and may be some extra help.