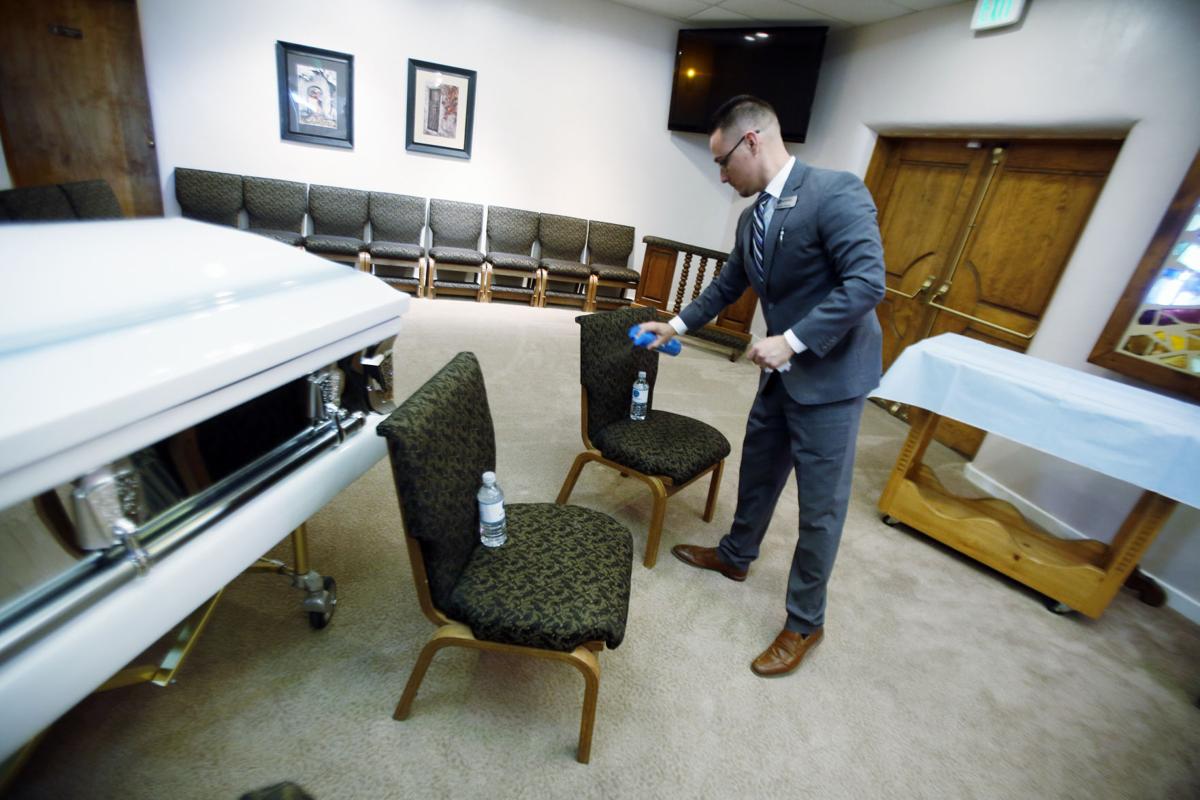 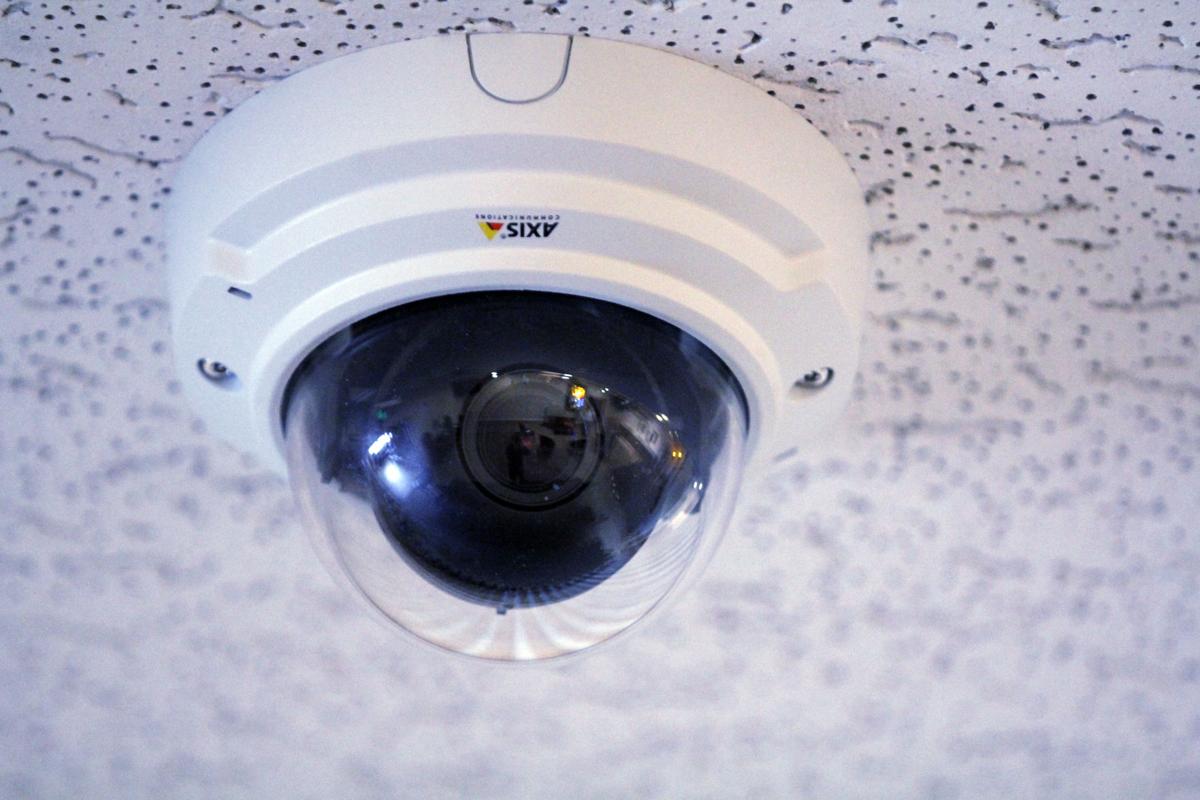 A web camera on the ceiling at Berardinelli Family Funeral Service on Friday. 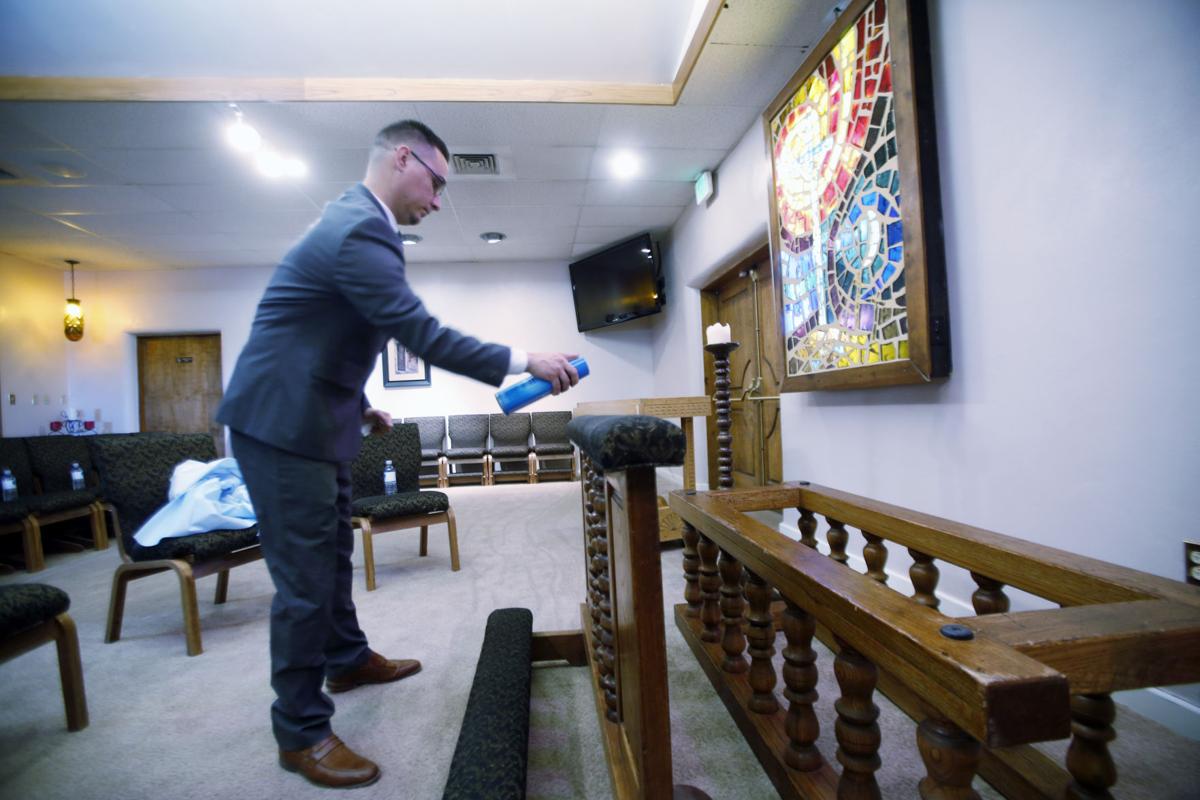 A web camera on the ceiling at Berardinelli Family Funeral Service on Friday.

When Francis Barela died May 8 at the age of 91, his family wanted to plan a large funeral with full military honors, recognizing his service in the U.S. Air Force.

But COVID-19 restrictions on large gatherings such as funerals meant that couldn’t happen. At least, not in the way his family envisioned.

Barela’s widow, Cecilia Barela, said officials at Santa Fe National Cemetery told the family her husband’s remains could still be buried there, but no more than five family members could attend and they would have to observe from their vehicles or curbside.

“We didn’t want to do that, so his [cremated] remains are with us here at the house,” said Jacqueline Barela, Francis’ daughter.

Families like the Barelas are waiting for the day when life returns to normal, and loved ones can be buried according to their families’ wishes.

Until then, they say, mourning feels incomplete.

In the interim, the Barelas say they’ve been heartened by the kindness of friends and family who have reached out to comfort them. Many prepare food for the family.

“But they just bring it to the door,” Jacqueline Barela said. “We can’t hug them. We just wave at them from the window.”

Other families going through the grieving process tell similar stories.

The family had planned to bury Martinez at the National Cemetery next to her husband, Benito Martinez, who had served in the U.S. Army. They, too, were distressed to learn only five people could attend the burial. But they decided to go ahead because they didn’t want her mother’s body to be in limbo while they waited for the restrictions on large gatherings to be lifted.

“We were not happy that she would literally be in the freezer for this long time,” Moulton said. “It was sort of a courtesy to her. We are missing the closure with a priest and clergy giving their blessings. But we thought it would be important for her to be buried. We were very eager to go ahead and get that part of her life settled.”

When her father died 12 years ago, Moulton said, his mourners filled the Cathedral Basilica of St. Francis of Assisi. When her mother’s remains were buried Wednesday, only the honorary pallbearers — five of Martinez’s seven grandchildren — were there to represent the family.

“They were proud and honored” to send their grandmother off, Moulton said, but the lack of a funeral with family and friends has made the loss even more difficult.

“A lot of folks are sending cards and best wishes, but it just doesn’t feel like closure yet,” Moulton said, adding the family intends to hold a celebration of her mother’s life sometime in the future but does not yet know when or where.

Berardinelli Family Funeral Service funeral director Jacob Shaw says the company has encouraged families to postpone funerals until they can gather to support one another. But it has adjusted the way it does business to accommodate those who can’t.

When Berardinelli hosts a funeral service, it sets aside its entire facility and designates set times over an entire day so people can pay their respects five at a time. Gloves and masks are provided to those who don’t have their own, Shaw said. The rooms where viewings are held are sanitized between each group’s arrival.

Last month, Shaw said, the business equipped one of its rooms with cameras and is now offering mourners the option of having the small services webcast live for remote viewing free of charge.

“It makes it difficult because families really need each other,” Shaw said, adding he has nearly a dozen families waiting to hold funerals over the next few months.

Rivera Family Funerals and Cremations funeral director Bob Clifford said the firm also has seen family members struggling to find closure under the restrictions. But he said the business hopes to begin transitioning back to more traditional ways of doing business in the next week or so if restrictions are eased as expected.

Cecilia Barela said she knows her family isn’t the only one suffering.

“Just wait until this horrible thing is over, and take your time,” she said. “It will take some time to get over it. But we will all get through this together.”

Until then, she is keeping her husband’s ashes in an urn on her mantle.

“I come in here to look at him all the time,” she said in a recent phone interview. “I say good night to him. To me, it’s like he’s still with us. But it’s been very difficult.”

Due to the declared "Public Health Emergency Response Act" implementation in New Mexico by the Governor, the grief and loss of life continues regardless of cause and manner of death. In many communities from across the State of New Mexico, each community will continue to experience sudden death scenes of all magnitudes (i.e., violent homicides, vehicle fatalities due to DUI's, accidental deaths, SIDS, heat-attacks, unclaimed and unidentified veteran's and infant's, missing and murdered persons, etc.) occurring at all hours of the day other than a COVID -1 9 death scene. Prior to the COVID - 19 pandemic, the States Funeral Industry was not prepared to deal with this "National Emergency" or "State Emergency," either! For example, has any one inquired on what is actually happening with the disrespect of handling of Native American Human Remains at the Office of Medical Investigations (OMI) in Albuquerque, NM due to this COVID - 19 pandemic? The reality about what this pandemic has created for many grieving families is "abandonment" by their own faith-based community-at-large and the State of New Mexico Government as a whole entity of a sad picture? Regardless, since the pandemic was announced in early March, many of the different "places of worship" decided to "closed" their front doors, period! And did you notice, the State of New Mexico Government Officials (i.e., local, state and federal) and their leadership did not make an effort to locate a positive mitigation process to accommodate the "places of worship" community with some type of emergency planning and preparation to assist them. In addition, the lack of the leadership from both leadership's in not taking a proactive approach to enhancing their emergency management, response, and core-capabilities prior to the COVID-19 pandemic arriving in New Mexico is appalling and deplorable. Frankly, no grieving family should have to wait for the Governor or the faith-based leadership to properly interred the dead (by all respects) unto sacred burial grounds with dignity and respect. The sad days in New Mexico are more to arrive as we speak.

@ Francisco: There exists a word termed "summarize." Use it.

By all respects, Mrs. Lopez, the purpose to not "summarize" my message is due to people not understanding the "whole picture" that needs to be shown about how serious the COVID -19 pandemic has adversely impacted the "places of worship." I don't need for you to be disrespectful in any magnitude, period!

It is apparent this business not located in Farmington, NM. In Farmington, due to MAGA movement, MLG directives not heeded.