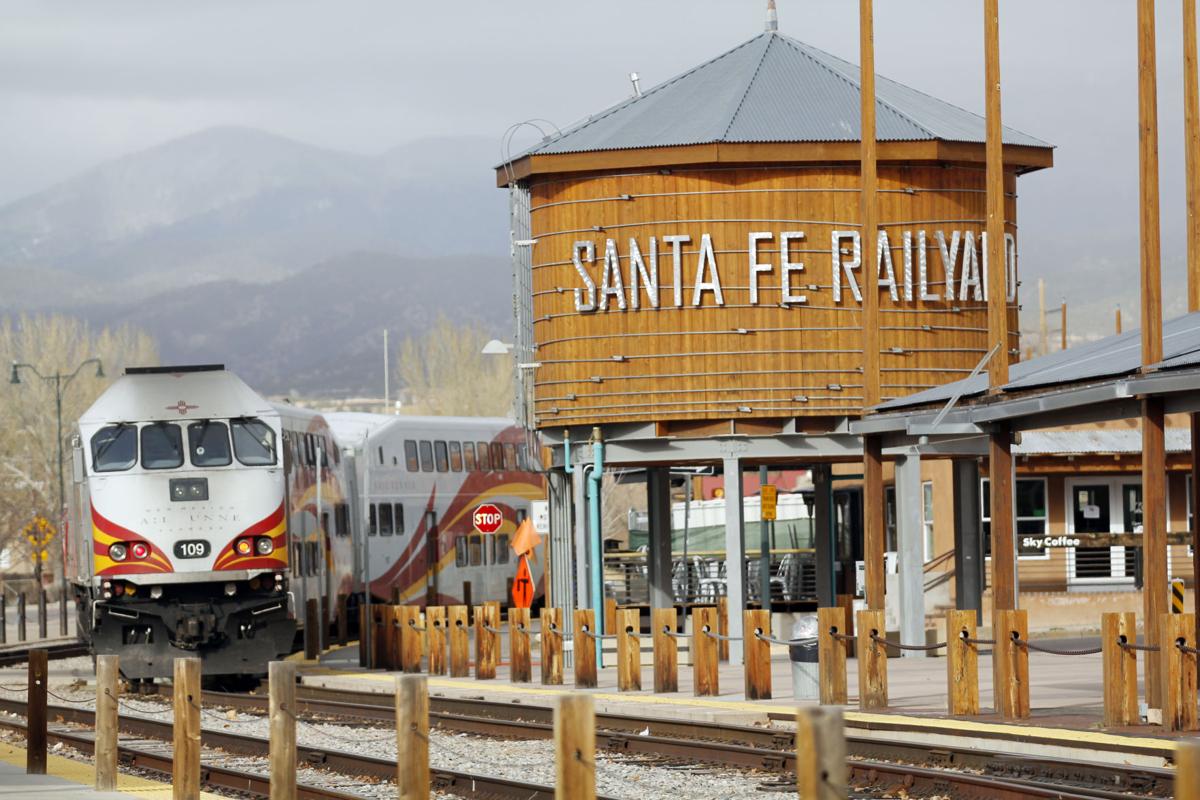 An empty Rail Runner Express train rolls in March into the Railyard. Passenger service is suspended for the train due to coronavirus restrictions, among several measures enacted to fight the outbreak in New Mexico. An empty Rail Runner Express train rolls in March into the Railyard. Passenger service is suspended for the train due to coronavirus restrictions, among several measures enacted to fight the outbreak in New Mexico.

The Rail Runner Express you see rolling into Santa Fe’s downtown depot is a ghost train.

The cars are empty.

No passengers have ridden the commuter trains that run between downtown Santa Fe and Belen since mid-March, when the state ordered the service shut down as part of an emergency health order in response to the novel coronavirus pandemic.

Health authorities were concerned about congested trains potentially spreading the virus up and down the corridor, which includes several stops in Albuquerque.

Trains now make several runs a day with no riders, partly to keep the conductors’ and engineer’s skills sharp and also to fine-tune and test a recently installed safety system.

The Rail Runner carried an average of 2,500 passengers daily during the week and 3,000 on weekends to various spots along its 65-mile route.

Still, most of the Rail Runner’s money comes from federal subsidies, not ticket sales, so the suspended passenger service hardly affects its bottom line.

“We’re not looking at any financial hardship because of that,” said Augusta Meyers, spokeswoman for the Rio Metro Regional Transit District, which oversees the Rail Runner.

The main concern is whether regular customers will return when the train service resumes after a monthslong hiatus, Meyers said. “We want people to come back when we reopen.”

The transit district received $55 million through the federal CARES Act, a law intended to ease economic impacts from COVID-19, the disease caused by the coronavirus.

Under the public health crisis, the district also can use its capital money — normally limited to maintenance, repairs and upgrades — to cover daily operations, Rio Metro Director Terry Doyle said.

Ticket sales only account for $1.5 million to $2 million a year, Doyle said. But losing that revenue might have forced the district to lay off or furlough some of the 144 people on its payroll if not for the federal relief.

“Diesel locomotives are made to run,” Doyle said.

The ghost runs also allow crews to test the new $60 million positive train control backup system with no passengers on board.

The federal government requires all passenger trains and larger commercial rail carriers to install these safety systems by January. Doyle said the system’s aim is to avoid collisions, derailments and other accidents by overriding an engineer who reacts too slowly or incorrectly to a hazard, such as an obstruction on the tracks.

For instance, the system could pull the brakes if an engineer didn’t respond immediately to people standing in the train’s path.

It also would take over if an engineer lost control because of a seizure or heart attack, Doyle said.

The Rail Runner has been involved in several fatalities since service began in 2006, with trains striking people and vehicles on the tracks. Officials have determined some of the deaths were suicides.

The death of a cyclist in Santa Fe in 2014 prompted calls for more safety devices and procedures at places where the track intersects with walking and biking paths.

The new system is designed to help prevent such occurrences.

Buying and installing the system was a $60 million unfunded mandate, he said.

The district paid for it through $35 million in grant money, an $11 million loan and $14 million diverted from its capital fund.

The goal is to have it fully operational on a train carrying passengers in October.

While at least 60 percent of the train’s riders during the week are government employees commuting to work, Doyle said, leisure riders make up a larger portion on weekends.

Meyers said leisure ridership has increased over the years since Santa Fe’s downtown station opened in 2008. She noted the passenger line has increased the connection between Santa Fe and Albuquerque.

Of course, ridership is much lower than what you’d see on commuter trains in densely populated Northeast cities, but before the Rail Runner shut down, more people were traveling on it per day than most any New Mexico road, she said.

The basic round-trip fare is around $9 or $10, depending on where a rider boards and their destination, with discounts for those buying a pass for a month or year.

The district has formed a plan for COVID-19 precautions, such as limiting the number of passengers in each car, regularly sanitizing commonly touched surfaces and having security guards ensure people keep at least 6 feet apart, Doyle said.

When the state allows the train to operate again, it will take a couple of weeks to get all the guidelines in place.

“We’re ready to roll when the governor gives the go-ahead,” Meyers said.

I've never seen the train very full. Seems it could have run a normal schedule and kept social distancing. But running empty trains isn't much of a difference than normal operation and of course, Uncle Sam, er, I mean the taxpayer pays the bills.

This was a Richardson boondoggle from the get-go; another attempt to force commuters to do something they didn't want to do and have to pay for it anyway via subsidies. And now, its "too big to fail" as it would expose some pretty big egos to failure.

The train gets ridiculously full to the point there is standing room only.

Maybe on a few runs but looks like on average, way below capacity. See Chart 17.

A fine time to kill this Bad Idea. Running empty trains back and forth to keep the engineers skills sharp; that is a fine thing. Its what we've been doing for some years now. Lets this this fiasco, and put the money into education.

Or we could remove the excess funding from the police departments and put that towards the train and education??? I don't see why APD & SFPD need military equipment that was used to fight a war in Afghanistan.

Another bad decision by mlg and her big thinkers. Trains shut down, buses running. Why? What's the logic?

Huge ongoing federal tax subsidies plus millions in covid tax funding? How did they get $55 million in covid money to replace $1.5 - $2 million in fares. They get regular taxpayer money to continue to pay their employees so what is the $55 million in covid money for? Weak ridership since the day it opened. Running 5 empty trains a day. Workers (144 of them) not working at full salary while tens of thousands are out of work because of decision made by these same government nitwits. If we can live without this for 4 months we can live without it forever and save the taxpayers money. It is way past time to finally put an end to this democratic (Bill Richardson) folly.

The problem with republicans is that they think the government should operate like a business but that isn't how a functioning government operates. The train isn't Trump Taj Mahal you can't just stiff all the contractors who work on it and declare bankruptcy. The train like all public transportation is not meant to generate profit but is a tool to improve commerce between cities. Northern New Mexico is a better community because of the train so kick rocks.

The way Rail Runner has handled this crisis just shows that the powers-that-be in New Mexico think the Rail Runner is a frill and not a vital necessity to commuters. This would also explain why even in normal times the train runs on such a ridiculously restricted schedule. Because the Rail Runner gets so much money from Federal subsidies, and so little from passengers, actual passengers don't matter any more than the bugs splattered on the windshield. The Rail Runner could have been running safely this whole time if the windows had simply been removed from the train to allow fresh air to circulate through the cabins. Maybe there would be a few days when inclement weather would have made this uncomfortable, but most days it would work just fine.