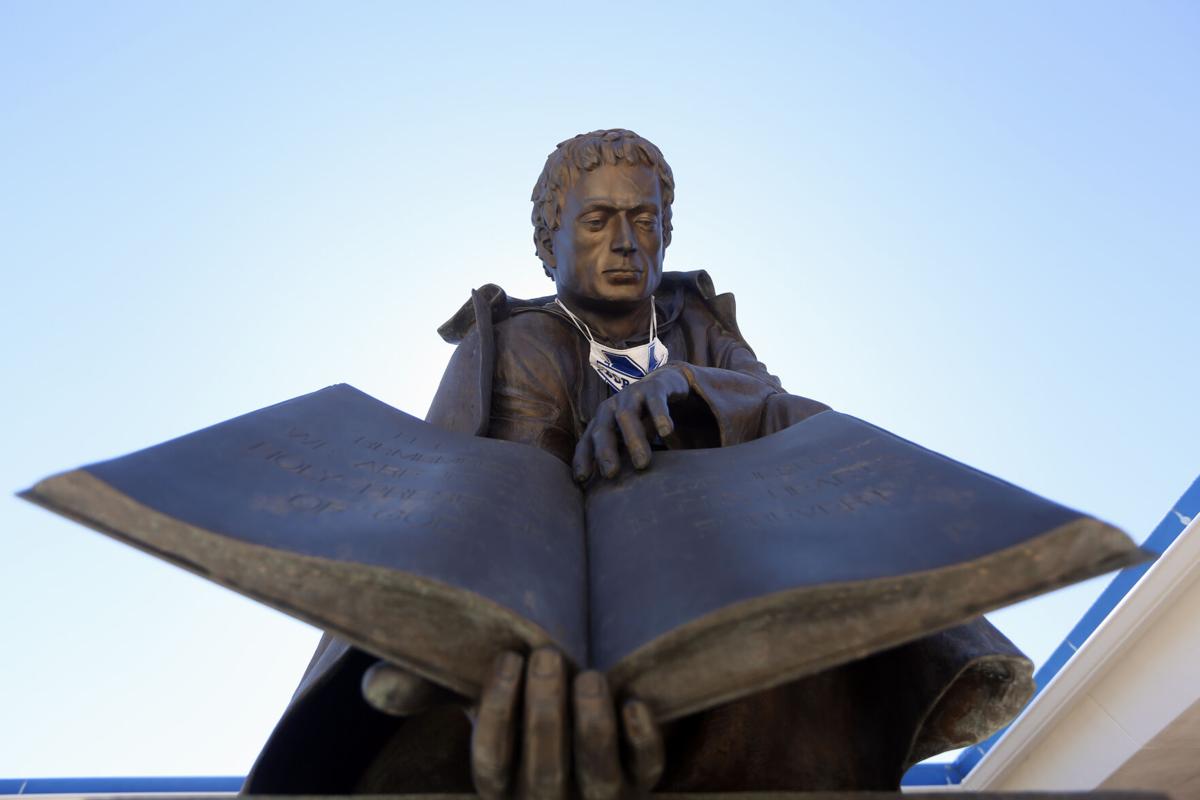 A mask hangs Thursday around the neck of a statue of St. Jean-Baptiste de La Salle outside St. Michael's High School. School President Leslie Romero Kilmer says officials are gauging how many middle and high school students will opt for in-person instruction. 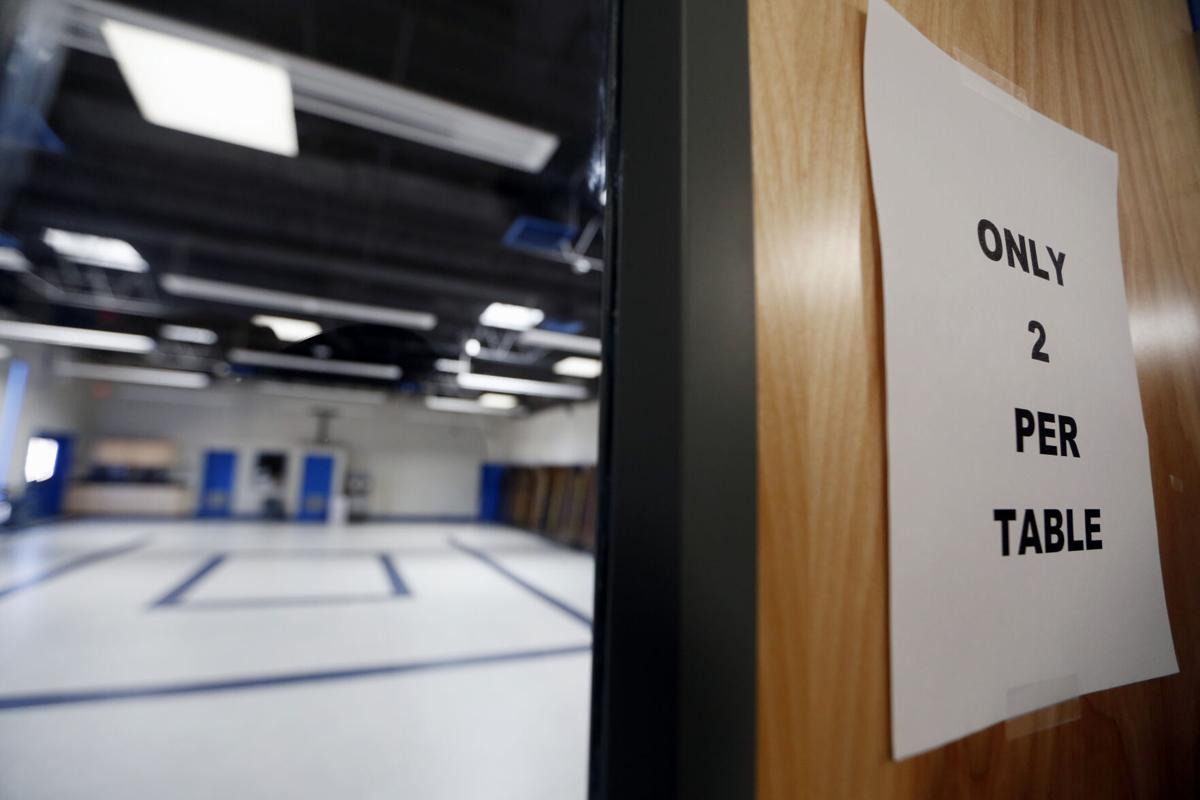 A sign reminding students to practice social distancing hangs at the entrance to the cafeteria at St. Michael's High School. 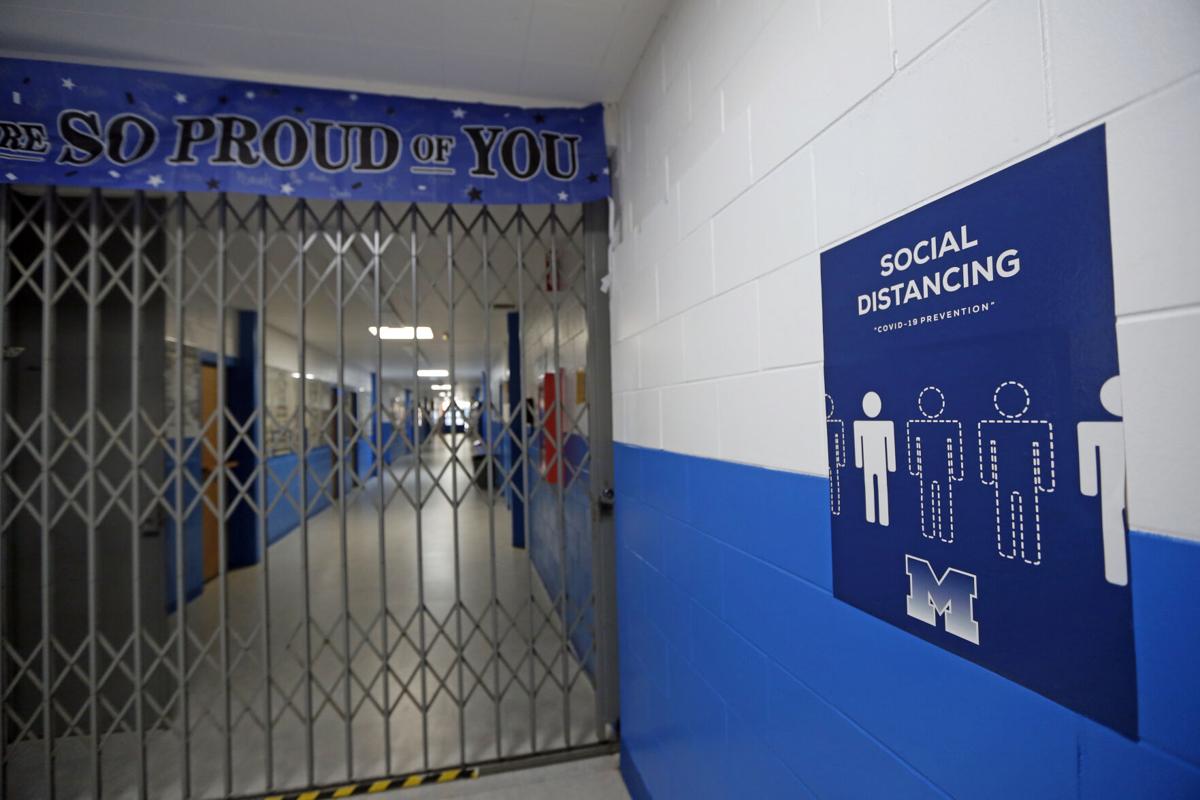 A social-distancing reminder hangs Thursday in a hallway at St. Michael’s High School.

A mask hangs Thursday around the neck of a statue of St. Jean-Baptiste de La Salle outside St. Michael's High School. School President Leslie Romero Kilmer says officials are gauging how many middle and high school students will opt for in-person instruction.

A sign reminding students to practice social distancing hangs at the entrance to the cafeteria at St. Michael's High School.

A social-distancing reminder hangs Thursday in a hallway at St. Michael’s High School.

Aaron Schubach sees normalcy slowly returning to school campuses around the state, but he recognizes educating students won’t be the same this year.

As the head of Santa Fe Preparatory School, Schubach and his staff will make the necessary adjustments for the return of all students who want to come back to the classroom to finish the 2020-21 school year after the state amended its public health order last week lifting capacity restrictions for private schools.

The changes put private schools on par with public and charter schools, which were given clearance to fully reopen by April 5.

Schubach said Santa Fe Prep has yet to determine when students will return to the classroom, but April appears to be a likely target. That is also the case at St. Michael’s High School, where President Leslie Romero Kilmer said school officials are gauging how many middle and high school students will opt for in-person instruction.

Most private schools are ready for the return of students, and many have already set up their classrooms to be in compliance with the state’s health orders. The only adjustments some of them will need to make is accommodating all students for four or five days of instruction, versus the hybrid-learning models that split students into cohorts and mixed a few days of in-person instruction with remote learning.

“Everything we’ve done is to bring kids back,” Romero Kilmer said. “They need that so much, and I feel good about what we have done to get to this point.”

Schubach said Santa Fe Prep won’t look much different from when it operated at 25 percent and 50 percent capacity after starting hybrid learning Jan. 19. However, he said recent guidance provided to public schools by the state said desks should be 6 feet apart “to the greatest extent possible.” That might mean the school can squeeze a few more students into classrooms.

“We are strong believers that when there is the ability to get 6 feet of space, that will be our standard,” Schubach said. “For example, when kids are outdoors or moving from place to place, 6 feet will still be our mantra. Most of our learning spaces can accommodate kids at 6 feet of distance, but we have been paying attention to that term ‘to the greatest extent possible.’ ”

If anything, that leeway has private schools reconsidering their classroom setups, particularly now that the Centers for Disease Control and Prevention has issued new guidance allowing for 3 feet of space between desks for masked students. Romero Kilmer said a few feet of difference means the school could bring back as many as 70 percent of its students, as opposed to closer to 60 percent with a 6-foot mandate.

Space is still an issue, Romero Kilmer said, and the school placed desks in some of its bigger open spaces to accommodate larger classes in a safe manner. Custodians will use misting sprays to sanitize hallways when classes are in session, and teachers will be required to clean desks after each period.

“We won’t have any tents for outdoor classrooms,” Romero Kilmer said. “We do have a nice courtyard area that has some cute artificial grass and some picnic tables. I’ve seen one of our teachers use that space [during hybrid learning].”

Gerson Pérez, head administrator of the Santa Fe Waldorf School, said the change in the health order will not affect his school because it already provides in-person instruction to about 90 percent of its students.

The school made a slight change to its configuration once the state allowed it to operate at 50 percent by taking a class that used two rooms to house students and moving it into one large room.

Pérez said Waldorf now provides in-person tours for parents of prospective students, as opposed to online viewings. The only requirement the school has is that parents remain with the admissions coordinator throughout the tour.

For the next school year, Pérez said he hopes Waldorf can avoid having to simultaneously teach in-person and remote students.

“We’re trying to finish the year the same way we have done it so far and hopefully start the next year in a different model,” Pérez said.

Those are similar challenges at Santa Fe Prep and St. Michael’s. Schubach said the goal is to continue to use indoor space as much as possible. He estimates about 75 percent of students will return to the classroom.

“With the 50 percent plan being all indoors, we’ve had some really good levels of connectivity support through Zoom and other platforms,” Schubach said. “As we go into the model with 100 percent, we hope to keep that going. And we hope that as many families as are comfortable join us on campus.”

Romero Kilmer said students attending class in person indicated they have had a difficult time hearing their remote counterparts, so the school is trying to alleviate that issue by supplying speakers. Romero Kilmer said some teachers brought technology they use at home to help, but she feels it is important that all classrooms have uniform accessibility.

“They already have the same computers, which was really good, and using one [virtual] platform,” Romero Kilmer said. “Now we are working to standardize all of our equipment so teachers have everything they need to teach [effectively], whether the kids are at home or in person.”

As schools inch toward the finish line of the 2020-21 school year, administrators say they have been impressed with the resiliency faculty, staff and students have displayed through myriad changes. Romero Kilmer said finishing the year in a fashion that almost resembles a normal school year lends hope that the worst is behind them.

“St. Michael’s has been in existence for 161 years, and it’s not like they haven’t been through some tough times,” Romero Kilmer said. “This is another one of them, but we’re getting there. We can see the light at the end of the tunnel.”