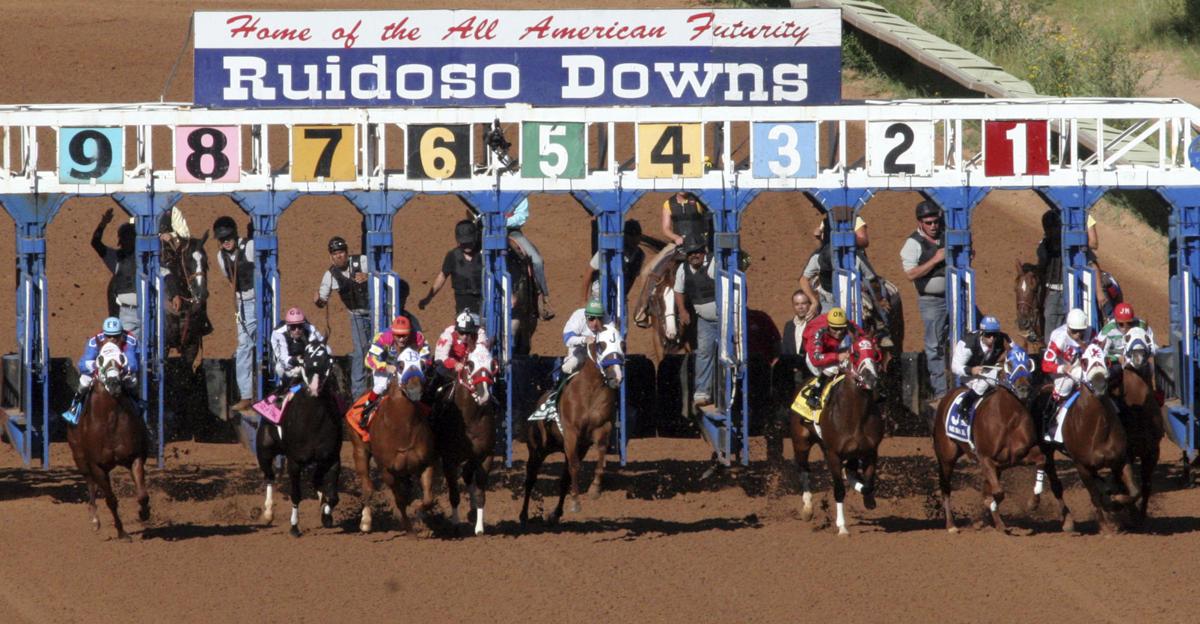 Horses compete in 2010 in the All-American Futurity at Ruidoso Downs Racetrack and Casino. Live racing in New Mexico has been suspended due to the pandemic. 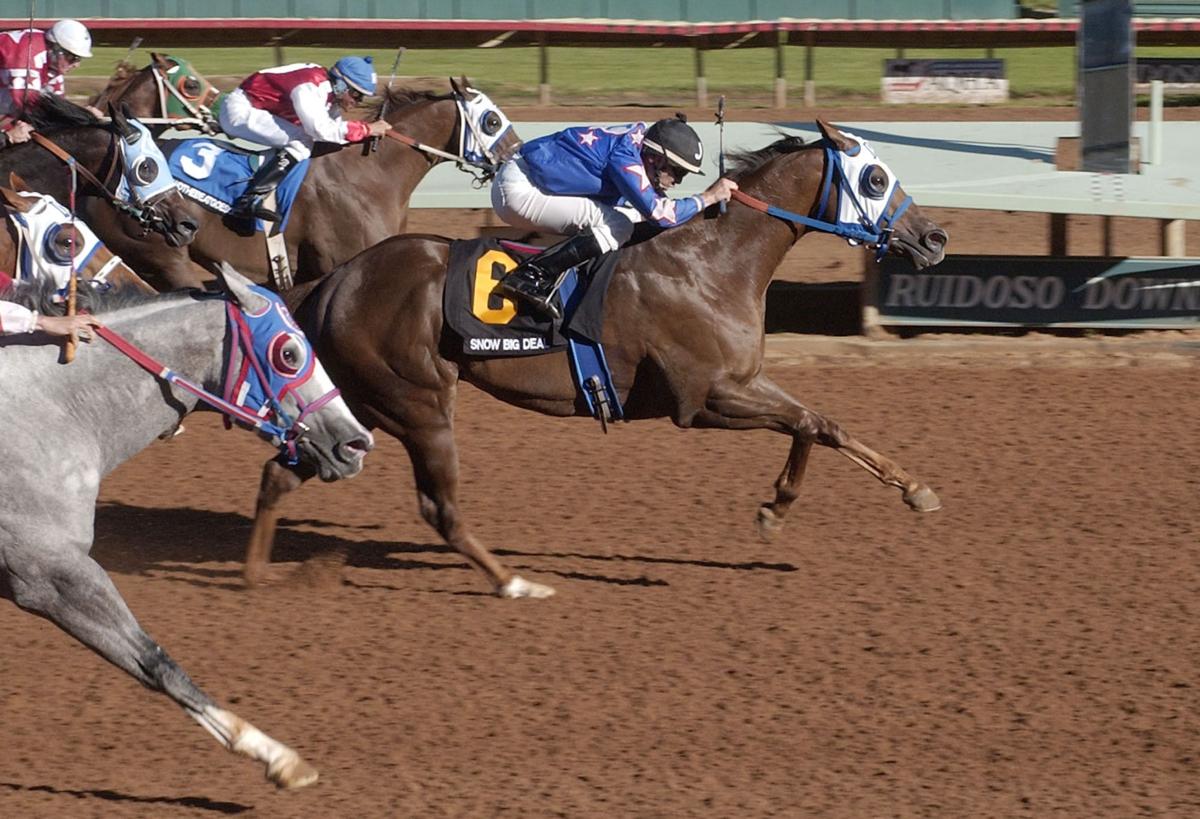 Joe Badilla Jr. rides Snow Big Deal, No. 6, to a win in the All American Derby in Ruidoso Downs in 2003. Organizations involved in horse racing in New Mexico are painting a grim picture for the future of the industry as the COVID-19 shutdown continues.

Horses compete in 2010 in the All-American Futurity at Ruidoso Downs Racetrack and Casino. Live racing in New Mexico has been suspended due to the pandemic.

Joe Badilla Jr. rides Snow Big Deal, No. 6, to a win in the All American Derby in Ruidoso Downs in 2003. Organizations involved in horse racing in New Mexico are painting a grim picture for the future of the industry as the COVID-19 shutdown continues.

The organizations that provide the infrastructure for New Mexico’s horse-racing industry are painting a grim picture as the COVID-19 shutdown continues.

Live racing across the state has been suspended indefinitely, wiping out lucrative events at Sunland Park in Southern New Mexico and SunRay Park in Farmington. Upcoming dates at three other venues are also in jeopardy as the state braces for millions of dollars in lost revenue.

What’s more, some say the health of the animals is now in question, and the future of the sport is being seriously threatened.

“I’ve lived through a lot of bad experiences at racetracks, but none will even come close to stinging the industry as COVID-19,” said Izzy Trejo, executive director of the New Mexico Racing Commission. “You can put that in bold letters, my friend.”

Trejo said horse racing’s economic impact on the state can be measured in the hundreds of millions. In 2016, he said, it generated just over $500 million for the state, making it the third-largest source of revenue behind only the oil and gas industry and the tourism and hospitality market.

“And look where the oil and gas industry is right now,” said Richard Erhard, executive director of the New Mexico Horsemen’s Association. “If there is a way to get the state’s third-largest economic engine back online, I say we explore it.”

The association is one of multiple stakeholders that successfully lobbied the state to allow trainers to resume workouts with racehorses after the state Department of Health issued stay-at-home orders, but the group was dealt another blow April 16 when the Racing Commission canceled an extended race event scheduled to begin Friday at SunRay Park.

Future dates for Ruidoso Downs, the Downs at Albuquerque and Zia Park in Hobbs are still tentatively on the books.

“In these turbulent times, people love to say the sky is falling. But I don’t believe we’re at that point yet,” Trejo said. “With that being said, I have concerns that when the light gets switched on for the economy, people aren’t going to be running to the casinos to spend their money. We may look a little different when this is all said and done.”

The industry relies heavily on a pari-mutuel system which combines bets from racetracks and casinos. It has been in place in New Mexico for more than a quarter-century and has become a significant source of revenue. Last year alone, the system produced $48 million in purse money for jockeys and owners and more than $250 million to the state from casinos.

In conjunction with other stakeholders, the association has proposed a tentative plan that calls for live racing with no fans. Wagering would be possible through simulcasting, but the only people allowed on-site would be essential personnel who follow strict safety protocols that include masks for all handlers and individual dressing areas for jockeys.

“We have an entire industry here that is in real, imminent danger of collapse,” Erhard said. “These horses, they look like and act like professional athletes. They’re well cared for, they’re well groomed, they are muscled up, they are race ready and they’re ready to run. That’s their job and they love doing it, and when all of a sudden that aspect of their lives is shut down, it’s a danger.”

Erhard said a track in Oklahoma staged live racing after the pandemic began in March and nearly tripled its single-day handle — or gaming revenue — from the same date the year before. He is pushing for the same thing if and when racing resumes in May.

The journey to recovery, however, isn’t that simple, Trejo said.

“We could open horse racing up, but if the casinos don’t open we’re going to be in a pretty bad spot,” he said. “The marriage needs to stay intact. A divorce is deadly to horse racing because we’re not going to generate enough money to have substantial purse money if we depend merely on pari-mutuel handle that doesn’t involve casinos.”

Beyond that, the concern is for the infrastructure that supports the entire racing industry.

New Mexico Horse Breeders Association president Tom Goncharoff has likened the organization’s mission to a form of agriculture, where animals are born and bred for the intent of either racing or being sold at auction. There are two high-profile auctions scheduled for this summer in Ruidoso, and each is in danger of being called off.

That puts jobs and livelihoods at risk, as well as business opportunities for countless others in the years to come.

But he added he’s not as gloomy about the prospects as some of his constituents.

Goncharoff drew loose similarities between the housing market crash of 2008 and the pandemic, saying it will begrudgingly flush some people out of the business and permanently alter the long-term approach for those who do manage to survive.

“Horsemen are just tough by nature and really resilient,” he said. “I’m not going to be that Pollyanna-ish. There’s a negative impact, certainly, but I think we’ll eventually recover.”

Trejo said the most optimistic outlook is a restart by mid-May, the new deadline for the stay-at-home order. For now, the plan is to go ahead with the scheduled event at Ruidoso Downs on May 22.

“I’ll tell you one thing: We’re going to be ready with COVID-19 protocols should horse racing be one of those industries allowed to come back,” Trejo said.

Trejo said the industry was on “very solid footing” before the pandemic. But just like everything else, there was no way to predict a global health crisis that brought everything to a virtual standstill.

“The tentacles of horse racing reach deep into communities that aren’t even near a racetrack,” Trejo said. “Obviously we think we’re important, but the well-being of citizens trumps that.”

I DONT KNOW ABOUT RACING, BUT RIGHT NOW THERE ARE A BUNCH OF HORSES AT THE GOV MANSION TAKING UP PRECIOUS AIR

no more than Kyle, king of the one liner, wasting our time with tropes!

GOOD! All forms of animal exploitation, ESPECIALLY those so cruel, should end forever. Abusing animals as entertainment? There's a special place in H@ll for people who support or engage in that sort of behaviour. Right next to those who abuse children.

Are you even serious right now?

I am okay with no horse racing. I believe it to be a cruel sport. It’s not as if those horses have any say.