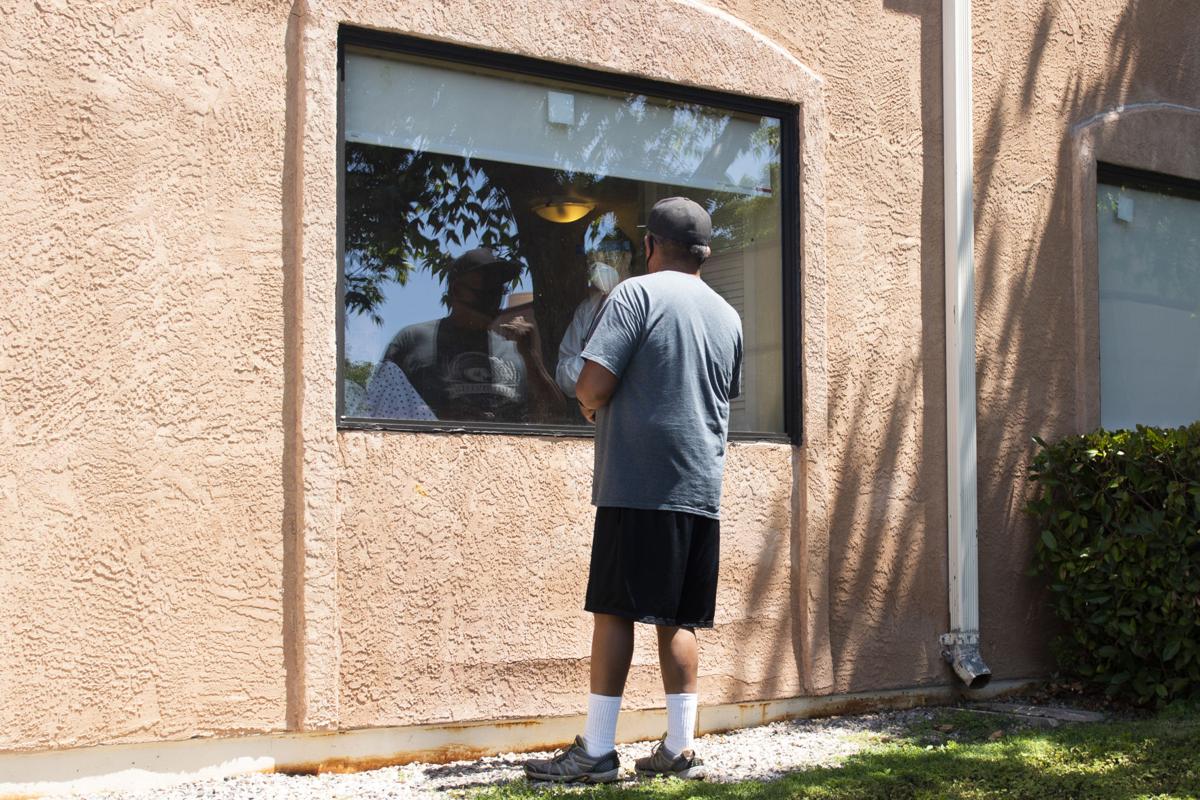 A resident at the Canyon Transitional Rehabilitation Center in Albuquerque, accompanied by a health care worker, chats with a relative outside the window. 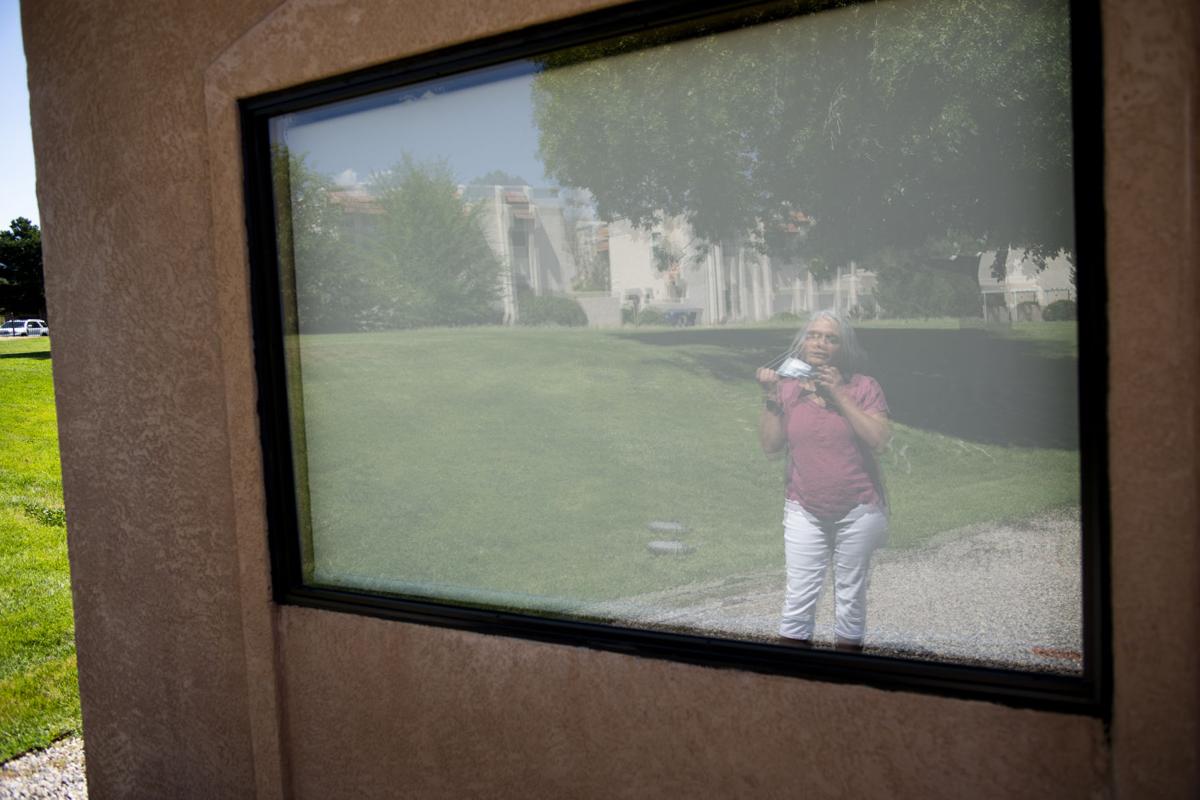 A reflection of Lola Harding in a window at the Canyon Transitional Rehabilitation Center. 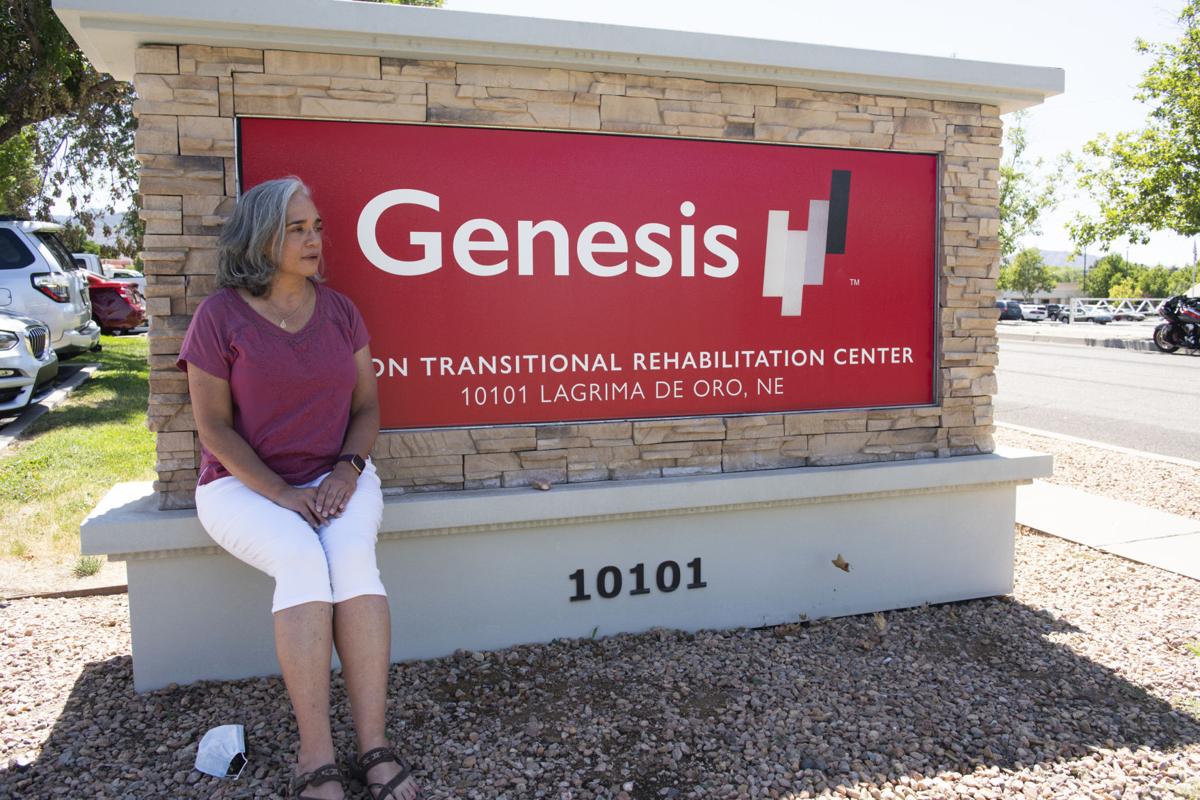 Lola Harding sits beside the sign for the Canyon Transitional Rehabilitation Center in Albuquerque, where her mother signed an arbitration agreement.

A resident at the Canyon Transitional Rehabilitation Center in Albuquerque, accompanied by a health care worker, chats with a relative outside the window.

A reflection of Lola Harding in a window at the Canyon Transitional Rehabilitation Center.

Lola Harding sits beside the sign for the Canyon Transitional Rehabilitation Center in Albuquerque, where her mother signed an arbitration agreement.

ALBUQUERQUE — When an ambulance dropped Lola Harding’s mother off at Canyon Transitional Rehabilitation Center, the 87-year-old was carrying an oxygen tank to help with her labored breathing.

She was in the throes of COVID-19 — exhausted from the late-night coughing fits that kept her from sleeping, disoriented to the point of hallucination. At the intake desk, an employee handed her a 23-page stack of admission papers.

On Page 8, a document stated: “This Agreement Waives The Right To A Trial By Jury.” Without giving it a passing thought, she signed it and handed it back to the clerk.

“I was so angry when I saw what that document was,” Harding said. “It made me feel that there was going to be no accountability.”

As deaths from COVID-19 surge in nursing homes across the country, Canyon and other facilities — many with histories of health and safety violations — are asking patients to sign such arbitration agreements. These contracts prevent patients and families from seeking a jury trial for wrongful death or negligence, instead binding them to the decision of an arbitrator usually paid by the nursing home company.

The agreements are a standard part of admission at all facilities run by Canyon’s parent company, Genesis Healthcare, one of the country’s largest for-profit nursing home chains and one that has been denounced by the U.S. Department of Justice as an “unscrupulous provider” that routinely provides “grossly substandard nursing care.”

In April, Gov. Michelle Lujan Grisham awarded Canyon a contract worth up to $1.3 million per month to exclusively house COVID-19 patients, despite the facility’s one-star health rating — the lowest possible score awarded by the federal Centers for Medicare and Medicaid Services. Canyon is a 73-bed facility.

The use of arbitration agreements has drawn sharp criticism from families, as well as legal and elder-care advocates, who say they allow nursing homes to deliver substandard care without fear of legal consequences. In 2016, the Obama administration banned the use of arbitration agreements in nursing homes; that ban was overturned by the Trump administration last year.

“These are very dangerous documents,” said David Hoey, an expert on nursing homes for the American Bar Association’s Commission on Law and Aging. “It’s almost a license to neglect or abuse, because if they do neglect or abuse, they can’t be sued.”

A 2019 analysis by the American Association for Justice, a nonprofit advocacy organization, found that Americans are more likely to be struck by lightning than to win a monetary award in arbitration. Though such agreements are voluntary, legal advocates say they are presented to patients and families during a time of extreme stress.

“My mom had no idea what she was signing,” Harding said. “It’s totally inappropriate to ask someone in that situation to sign away their right to access the court system.”

Fearful of future repercussions, Harding’s mother was adamant that she not be identified. She is a fiercely proud woman — a onetime educator who worked in accounting at Los Alamos National Laboratory.

When Harding reached her by phone a few days after her admission, her mother said, “I can’t believe that this has happened to me. These have been the most horrible days of my life.”

She has since been discharged from Canyon and is recovering at an assisted-living home elsewhere in Albuquerque.

In a July 7 email, Genesis spokeswoman Lori Mayer said that “Canyon Transitional, along with all of Genesis’ subsidiary centers, have offered an arbitration agreement to patients and residents or their respective responsible party for years, as permitted under existing regulations.”

Even before the pandemic, nursing home inspectors documented a pattern of widespread and severe health and safety violations in New Mexico, tied with Arkansas for the highest rate of serious deficiencies in the country, according to a database compiled by the nonprofit investigative news organization ProPublica.

Eighty-five percent of the state’s nursing homes “failed to provide and implement an infection prevention and control program” before the pandemic, according to an analysis by Searchlight New Mexico.

In the past four years alone, the Centers for Medicare and Medicaid Services cited New Mexico’s 25 Genesis-owned nursing homes for nearly 1,000 violations of health and safety standards and chronic understaffing, according to the database. Inspection reports show 41 of those were issued to Canyon — double the average number of health citations in other New Mexico nursing homes.

Since the pandemic’s onset early this year, at least 188 people have died in New Mexico nursing homes. Six of those deaths have occurred at Canyon.

In recent months, the federal government has suspended much of its oversight of nursing homes, including the requirement to report staffing levels.

Meanwhile, employees at Genesis and other nursing homes in New Mexico have filed at least six complaints with the federal Occupational Safety and Health Administration, alleging nursing homes are taking inadequate precautions against the novel coronavirus and putting the safety of staff and residents at risk.

“It’s really just a black box right now,” said Charlene Harrington, a sociologist at the University of California, San Francisco who researches the business practices of Genesis and other for-profit nursing home chains. “Nobody’s been able to find out what’s going on inside.

“I don’t see how anyone could argue that they could give informed consent for an arbitration agreement in the middle of a crisis, especially if they are sick with COVID,” she added.

Despite the pandemic, Genesis continues to show healthy revenues.

In May, the company reported receiving more than $300 million in government grants and loans, including a $180 million grant under the federal CARES Act. The state of New Mexico pays more than $43,000 per day to Canyon — a figure that does not include federal reimbursements that are likely billed at an even higher rate.

“Despite the challenges of preparation and response to this unprecedented pandemic, Genesis reported a solid first quarter of 2020,” the company declared in a May 27 news release.

Nevertheless, the nursing home industry has been aggressively lobbying for blanket immunity from legal prosecution during the pandemic. Already some 20 states have granted legal immunity to nursing homes; discussions of federal immunity, an idea supported by U.S. Senate Majority Leader Mitch McConnell and other lawmakers, are ongoing.

“This push for nursing home immunity is pretty shocking to me,” said Toby Edelman, a senior policy attorney at the Center for Medicare Advocacy. “How can you just say, ‘You’re automatically immune, no matter what happens?’ It’s really an anything-goes situation.”

Juliana Brenner contributed to this story.

I was in a genesis facility after my abdominal aortic aneurism, first thing I did, was talk to the dietician in meals, and we decided on extra large , double portions .i got, one piece of plain white bread French toast fir breakfast, one hot dog for lunch, And a glass if juice, dinner was the same only a very small burger

I Complained , but nothing happened

Next, no lock on the drawer in the nightstand

At least we can be thankful we are not NY where governor "walks on water" sentenced 7,000 elderly to death in nursing homes with his policy of making those facilities accept covid-19 positive patients.

It is very troubling that the Governor, under the State of Emergency, is awarding such Sole Source contracts, worth millions of dollars, to such as Genesis.

Also, that DOH descriptions, issued daily for Covid, don't include "where" the patients die. Canyon Rehab patients have died, but who's to know...

The Governor, and the DOH, are far too secretive. Under pressure from the Legislature, they finally produced a few records of how they've spent $200 million. Who will prosecute them for Malfeasance?? or fraud?? or theft?? The Attorney General? Not likely, as he isn't into prosecuting government employees. Some folks are making a lot of money off the Covid crisis, thanks to our Governor and her defective Cabinet.

It is disturbing that businesses are forcing clients and employees to sign these waivers and it appears the GOP dominated US Senate does not care to protect its constituents--you know real people and voters. I do know that Brookdale seems to be doing an A+ in being safe for its residents. And why did MLG give this contract to a facility that has such a low rating? Maybe the AG should investigate.

IMO, FWIW, it really is the duty of the state & other local authorities to monitor and, if necessary, cite & close nursing homes for malfeasance, etc.

NEW MEXICO RAPIDLY BECOMING "LAND OF ELDER ABUSE!" _____________________________________- - - It's getting worse than the RICO episode in the first season of the 'Better Call Saul' series about the fictitious Sandpiper Crossing nursing home. New Mexico is getting quite the reputation for elder abuse after this story's revelations; the case involving Ayudando Guardians, a nonprofit guardian/conservator company; and rampant use of binding arbitration in housing contracts, especially for retirement communities (whether HOAs or condominium associations). I can't wait to hear how the crooks in the Roundhouse will have hearings to express their indignation and then pass laws crafted by nursing and home industry lobbyists to further insulate them from litigation! Call in the refrigerated trucks for grandma and grandpa, it's going to be a long hot Summer in New Mexico (continuing until Spring)!

Lets send them to you Connie... Bringing Covid into your home is risky, or haven't you heard?