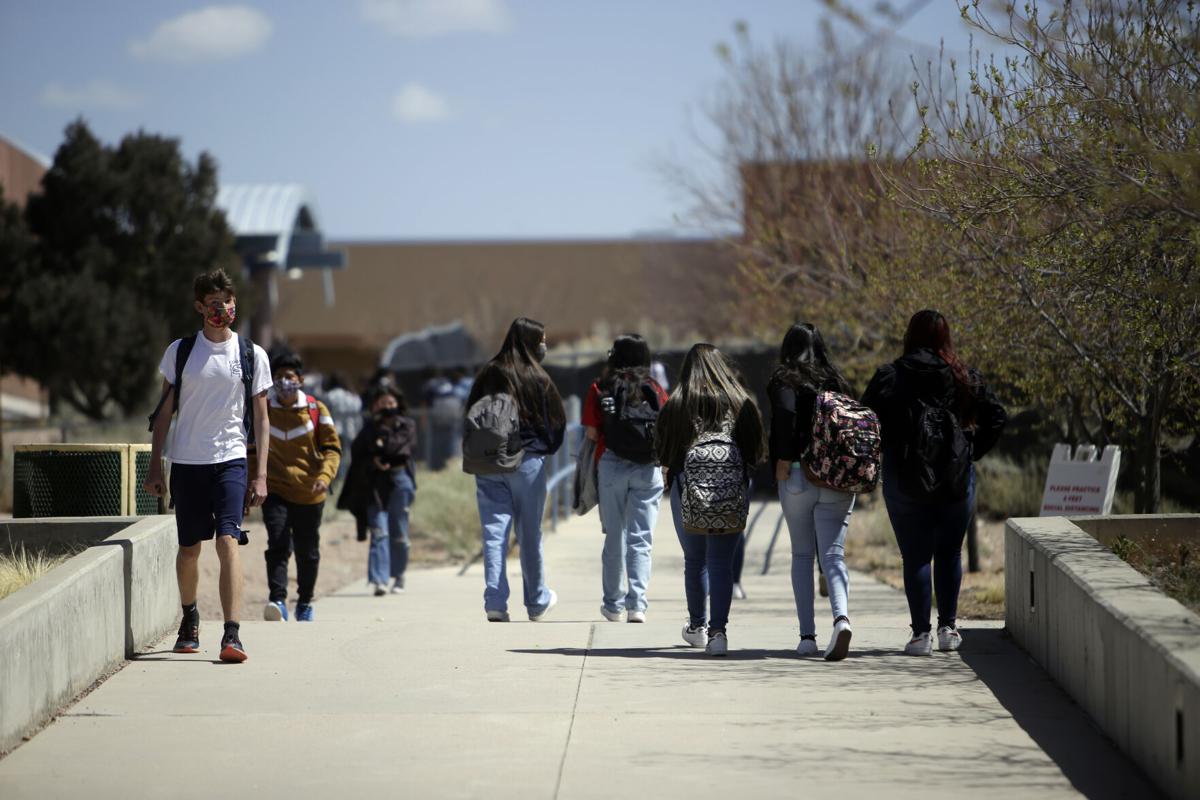 Students walk April 6 on the campus of Santa Fe High. Since Santa Fe’s public schools fully reopened, the district has seen 14 coronavirus cases among students and staff members and 10 this week alone. 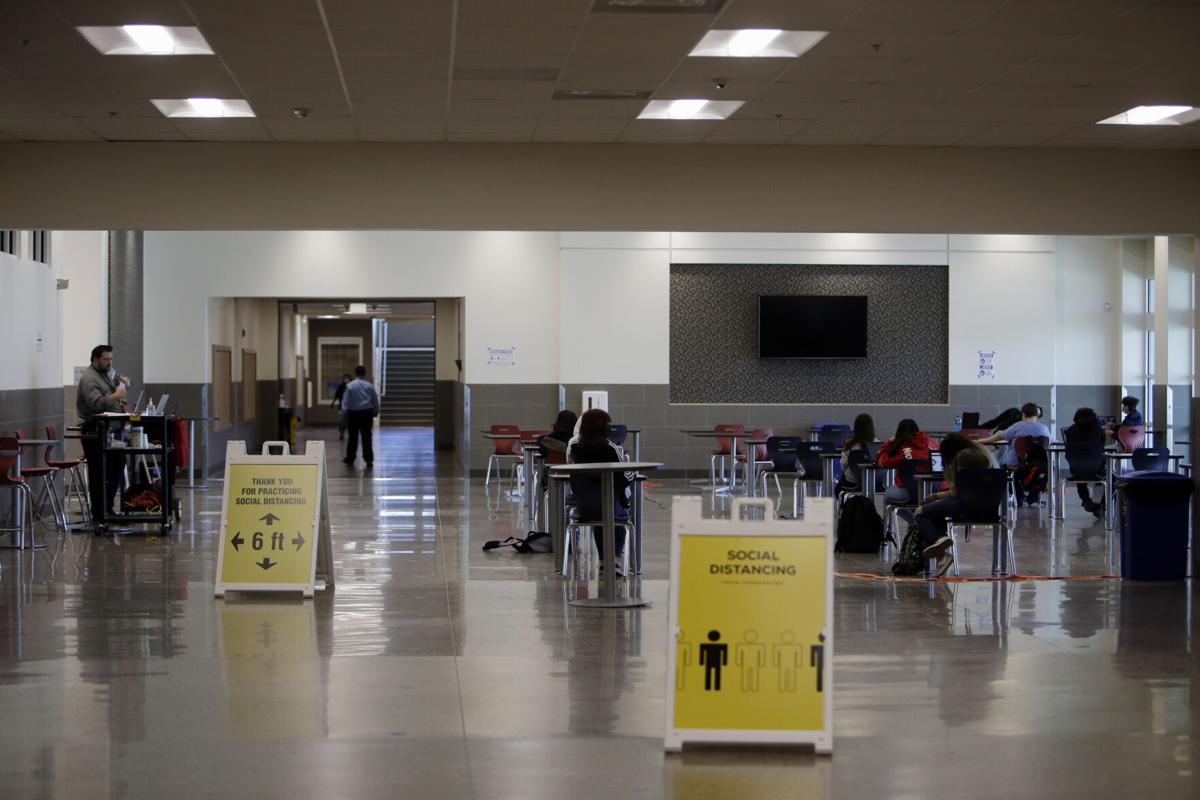 Students walk April 6 on the campus of Santa Fe High. Since Santa Fe’s public schools fully reopened, the district has seen 14 coronavirus cases among students and staff members and 10 this week alone.

The COVID-19 case count in Santa Fe County has climbed over the past week — and that has some city leaders concerned.

Equally troubling has been an increased case count among Santa Fe Public Schools students, particularly after the district announced seven students from four schools had tested positive for the coronavirus. The district announced its latest infection Thursday evening, as a student from Sweeney Elementary School tested positive for the coronavirus. That makes 14 cases involving district students and staff members since April 5 and 10 this week alone.

According to figures from the state Department of Health, those totals mirror a statewide trend that has seen an increase in COVID-19 cases among school-age children that coincided with public and charter schools reopening April 6.

Overall, the state Department of Health has reported 156 COVID-19 cases in Santa Fe County since April 5, with 81 of those since April 16. Only 10 cases were reported in the county Thursday, the first drop in several days. But the upward trend prompted the city to issue a news release Wednesday night, imploring people to continue to wear masks, maintain social-distancing measures and get vaccinated.

“When public health officials and government leaders keep telling us that ‘we’re not out of the woods yet,’ what they mean is that people are still getting sick and dying, and we still face the threat of backsliding to ‘Yellow’ and the restrictions that come with it,” the release stated.

Superintendent Veronica García said the uptick in district cases is a microcosm of what is happening in the city and the county as a whole. She said the county’s turquoise status — the least-restrictive level of the state’s four-tiered system of pandemic-related public health restrictions — might give a false sense of security to some.

“We have to remember the virus has not gone away and we have not reached herd immunity,” García said. “The spread is real.”

García added that most of the cases reported on campuses are not related and have not led to larger outbreaks, which she said indicates the health and safety guidelines the district is using are working. Of the 14 cases, two were linked to girls basketball players at Santa Fe High School. A student who tested positive at El Dorado Community Monday had a sibling identified as a close contact who had to quarantine for 10 days.

However, the increase in cases involving students matches the Health Department’s latest demographics report released Monday, which showed only the 5-17 age group had an increase in its weekly percentage of new cases — to just over 20 percent.

The number of schools in the state temporarily returning to remote learning has grown from zero the first week of full reopening to 16 as of Wednesday, according to the Public Education Department.

“It doesn’t necessarily mean all these children were infected in school,” Health Department spokesman David Morgan wrote in an email. “We can’t ascertain from this data where they were infected (in school, after school, in a sports related practice/game, hanging out with friends off school property, etc.).”

Morgan added the department’s Epidemiology and Response Division is working on a pediatric report, which will include a county-by-county breakdown.

Kyra Ochoa, the director of the city’s Community Health and Safety Department, echoed García’s observation that schools are not the only source of increased cases. Ochoa said city leaders have regular meetings with health officials that focus mainly on vaccines but also provide with information regarding and potential trends.

Ochoa said she was not aware of the recent case increase being related to any specific area.

“We have so many variables, from schools opening to other openings that are happening because we are in turquoise, to people relaxing on COVID-safe practices because they’re tired or hopeful of vaccines,” Ochoa said.

García said the district’s protocols for treating ill students have helped mitigate potential spread. She said students who show symptoms of potential infection are sent home and parents are informed so they can get their child tested. Once a positive test is confirmed, García said the district’s head nurse, Anita Hett, helps coordinate contact tracing. Close contacts are required to quarantine for 10 days, and affected classrooms are cleaned and closed for 24 hours.

In some cases, García said, schools are becoming the last line of defense in battling COVID-19.

“We are watching kids whose parents are sending them to school with symptoms,” García said. “Now, not all of them are COVID. It might be allergies, a cold or a tummy virus, and there is a stomach virus going around right now. But if we catch somebody with symptoms, we ask them to test [for the coronavirus].”

Correction: This story has been amended to reflect the following correction. A previous version of this story incorrectly reported El Dorado Community School among the four schools reporting positive cases on April 22. It was Mandela International Magnet School.

Also, two cases involving El Dorado students are not related. The second positive case identified a sibling as a close contact who had to quarantine.

If all adults have the opportunity to be vaccinated there goes the last pathetic excuse for not having schools open. Kids have a %.01 percent chance of dying of covid. My goodness. If you're not afraid of the germs on your own keyboards take 5 minutes to research all of the actually challenges kids have faced this past year. Selfish humans.

I will not set myself on fire to keep you warm. My health is not your responsibility and yours is not mine. There is nothing political about covid. So please, take your ignorance elsewhere.

Nancy Lockland: "My health is not your responsibility and yours is not mine."

Ayn Rand could not have said it better. And truly, spoken like someone who has never been in a lifeboat.

True. Science is NOT followed. Political goals are followed.

I don´t think this is a bad thing. Kids and adults alike need to build NATURAL immunity. They don´t shut down the schools when the flu goes around.

That link is so old it doesn't even open.

Sorry Nancy, there has been nothing Natural about this pandemic. This virus outweighs the effects of a flu virus. Your ignorance in general outweighs scientific findings. It is obvious you don't have family or friends that have been suffered from this pandemic. Please keep your nonsense opinions to yourself or better yet travel with the GOP party members to Texas

funny how the pandemic showed us ignorance is the most deadly virus spreading in america.

Please share the facts of how covid is more dangerous. Deaths from covid or with covid? Any underlying deadly issues when dying "of" covid? I know, questions are censored.

Am I to understand, Nancy Lockland, that you believe that the Coronavirus Global Pandemic is no worse than Influenza?

My thoughts are that I would recommend to the State of New mexico , that there needs to be 2 cases in a classroom with positive Covid PCR tests to determine that there may be classroom transmission, otherwise we may assume that these cases were community transmitted cases. Also I do not feel that vaccines are the only way to achieve immunity. How about natural immunity? And why doesn't the media report what percentage of people have immunity from actually active disease ? And children mostly aren't awfully sick , they mostly are mildly affected. Perhaps we as a nation need to invest more money into testing our children for covid weekly and . Perhaps this will give us more information then planning on giving our children more vaccines. Perhaps we need to understand what strong immune systems mean and work to achieve that.

Questions are NOT allowed.

"Questions are NOT allowed," mark Coble, yet "fat, white, short people" who manifest signs that they fear being racially inferior are permitted? Seems unfair.

Um, duh? There were 8 weeks left. Should have stuck it out at home until summer. But superintendent Garcia needed a win before her resignation so now we have kids infecting their grandparents.

Fact check: New Mexico PED required all districts to enable the return of students, and New Mexico PED forced SFPS to renegotiate on the year-long health waivers it had been providing to teachers who were more vulnerable to coronavirus. So yeah, "duh", but this decision came from the state level, not the district.

Children in the school setting cannot be expected to follow pandemic rules. It is a mistake to try to open schools. There was no need, summer is almost here. Parents need to face facts, the school year is lost, and you cannot bring it back, Start school I the fall, when more kids are vaccinated and rule following is not critical.

102 years ago the 4th wave began to affect youngsters disproportionately... the trend is a natural one based on viral behavior - we should always make sure all adults in the building are vaccinated, at least...