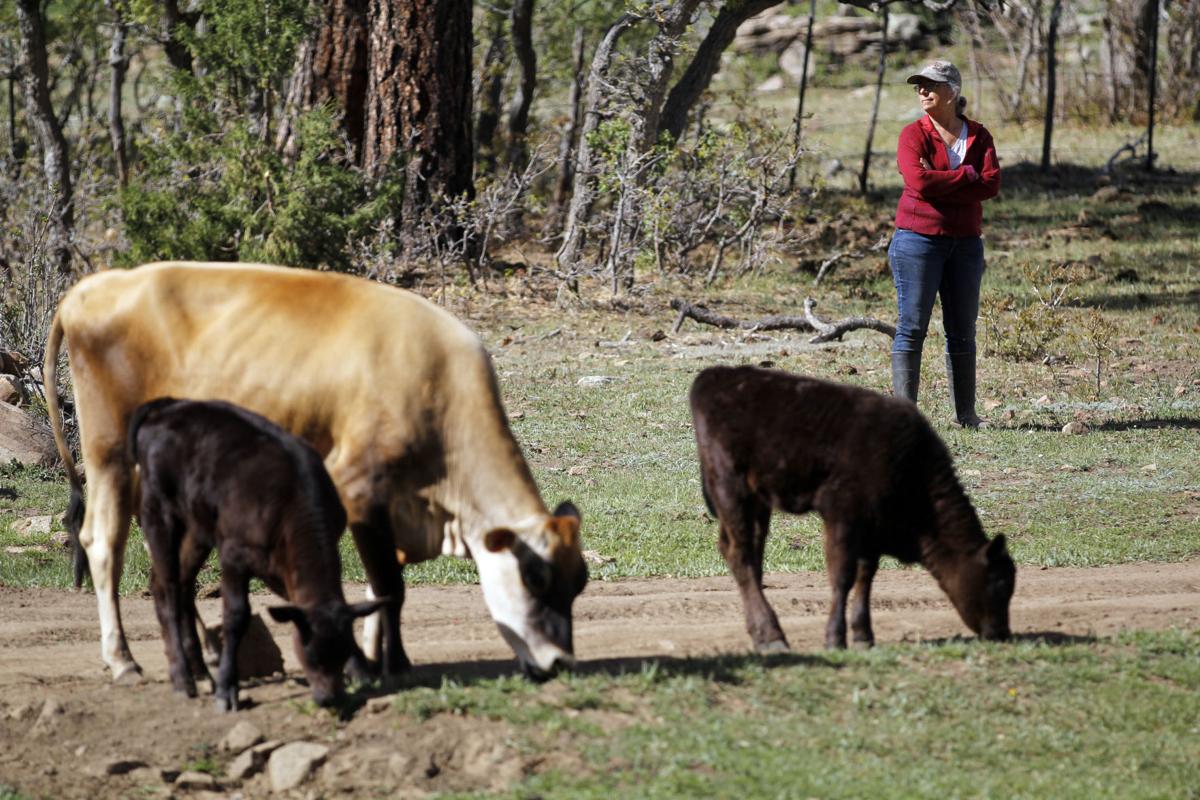 Carla Gomez, owner of Los Vallecitos Ranch in Mora County, is among small-ranch operators who have had to forgo processing their livestock due to disruptions caused by the novel coronavirus. 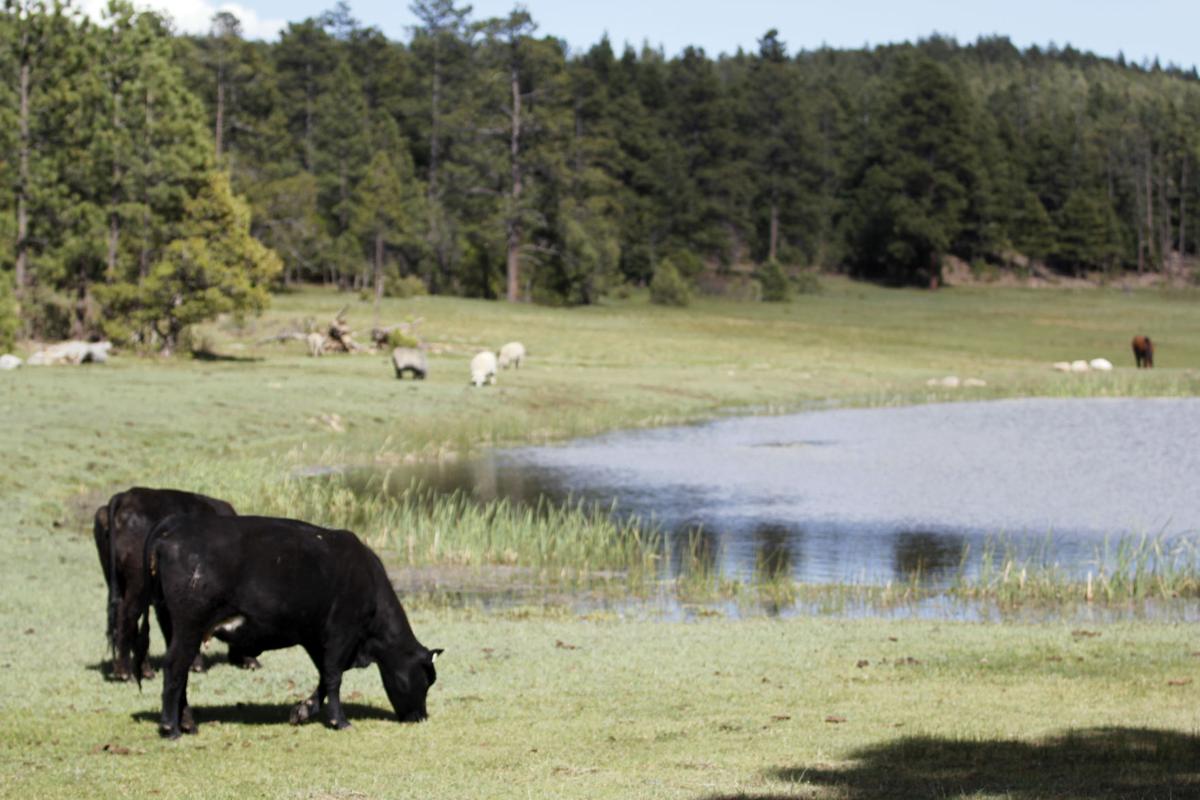 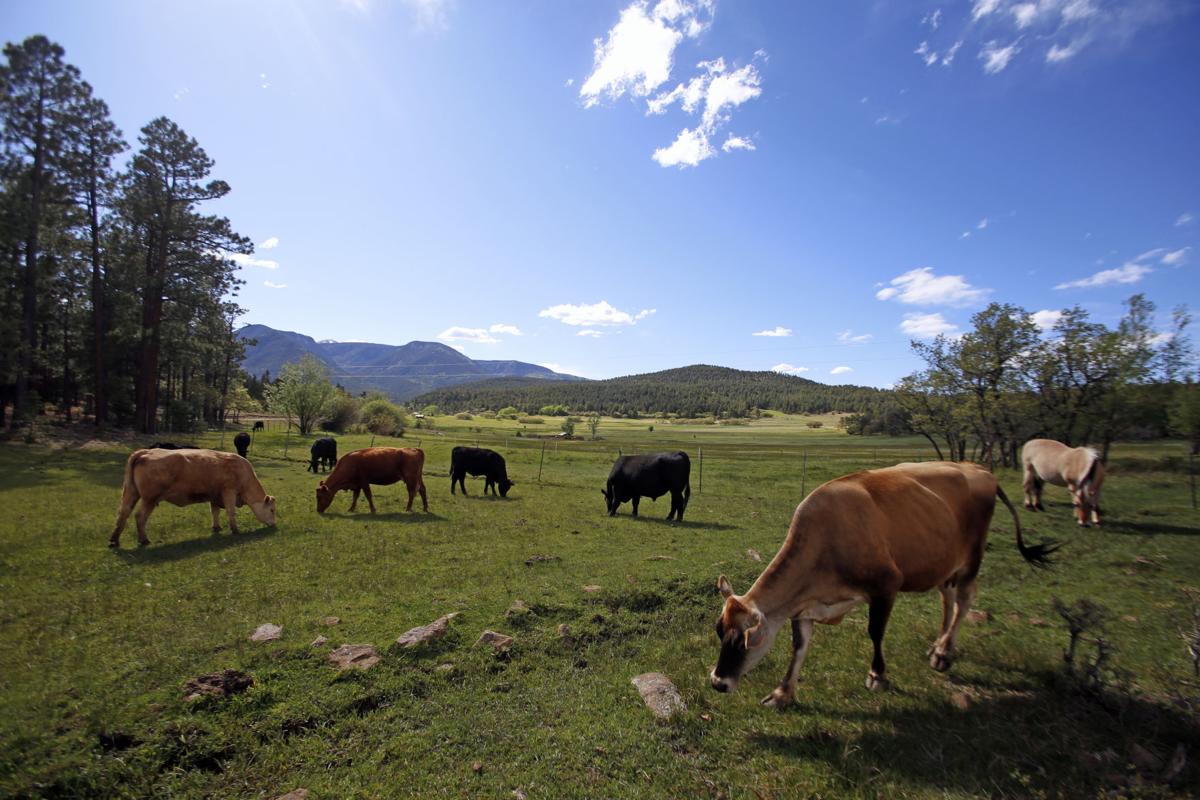 Carla Gomez, owner of Los Vallecitos Ranch in Mora County, is among small-ranch operators who have had to forgo processing their livestock due to disruptions caused by the novel coronavirus.

MORA — This isolated hamlet is both small and majestic.

Nestled in pine-covered hills with the Sangre de Cristo Mountains as a towering backdrop, Mora is the place where Carla Gomez has ranched for years. It’s far away — or so it seemed — from the problems faced by the rest of the world.

But the coronavirus pandemic is disrupting New Mexico’s cattle and sheep industries, causing the wholesale prices of meat and wool to drop sharply, and its effects are not lost on operators like Gomez, who owns Los Vallecitos Ranch in Mora County.

The cattle and sheep industries are affected in different ways, but ranchers on both fronts say the difficulties they face might drag on into the next year.

Ranchers say demand for beef and lamb has plummeted partly because restaurants were shut down to slow the spread of the novel coronavirus, which causes COVID-19. Cattle ranchers also are selling fewer calves because some large meat processing plants were idled because of viral outbreaks among workers.

Young cattle and lambs are now stuck at feedlots beyond their prescribed time, incurring more expenses while vendors wait for meat prices to rise so they can at least break even.

In January, the price for cattle was $1.20 per pound, roughly the break-even level for sellers. It’s now at 99 cents a pound.

Live lamb prices have fallen to $1.35 a pound from $1.90 two months ago, industry officials say.

“Anybody that is trying to market livestock at all is taking a hit,” said Caren Cowan, publisher of New Mexico Stockman and Livestock Market Digest.

But the pandemic is just the latest problem to affect the U.S. beef market. Prices began declining after a peak of about $1.65 a pound in 2015, Cowan said.

That was the last year before “country of origin” labeling was removed, which opened the way for more competition from foreign exports, said Randell Major, president of the New Mexico Cattle Growers Association.

In August, a fire at Tyson Foods’ meat-processing plant in Holcomb, Kan., shut down operations there for three months. Many New Mexico beef producers use this high-volume plant to process their meat, so having it closed led to a glut of unsold cattle, causing prices to plummet.

Cattle prices began to rebound in January, but the pandemic struck in March, and prices fell again as Tyson and other national meat processors grappled with outbreaks closing their factories or reducing operations, Major said.

Prices have begun to go up again but are still below the break-even mark, he said.

“The supply chain was interrupted big time,” he said.

Some midsize ranches, in turn, are taking their cattle to New Mexico’s three federally certified meat processors for slaughter, causing these smaller plants to be booked for months.

Smaller operators like Gomez must forgo processing their livestock, putting a damper on their businesses.

Gomez raises grass-fed cattle and sheep on her ranch, with 70 sheep and 23 cattle on the land she devotes to producing specialty meats that she says have earned the Animal Welfare Approved label.

She is unable to process any meat because her butcher, Western Way Custom Meat in Moriarty, is booked solid.

For now, she is buying and reselling standard wholesale meat at her local ranchers cooperative to help keep that store stocked. But the whole point of the cooperative is to sell high-quality meat from grass-fed local livestock, she said.

“So we don’t want to sell commercial meat,” Gomez said. “It kind of defeats the purpose.”

The company isn’t taking new customers until at least September, unless it’s an urgent order such as a dying calf that must be brought in while it’s still alive, he said. His plant can butcher about 10 cattle a day — a tiny number compared to a Tyson plant that can slaughter 6,000 daily.

Minifie believes part of what’s driving up business at his plant is people buying meat at smaller regional store chains, such as La Montañita Co-op, because they’re finding slim pickings at big supermarkets.

Some larger grocers still impose limits on meat purchases to prevent hoarding, such as two or three packages of meat per customer, Cowan said. Yet stores are still struggling to keep their shelves stocked because of the diminished supply.

Minifie said that despite more demand for his services, he’s kept his prices the same.

“It’s not right to raise prices and profiteer from a problem like COVID-19,” he said.

Major said the four national meat processors have been accused of profiteering.

The U.S. Justice Department plans to investigate complaints that some meat processors are colluding to keep the prices they pay for cattle low, even as retail meat prices are rising, Major said.

New Mexico beef producers became dependent on these large processors after the state quit doing its own meat inspections in 2007, he said.

Anyone who processes meat to sell on the open market must be certified through the U.S. Department of Agriculture, which is extremely cumbersome for small ranches, Major said.

Those who are uncertified may slaughter meat only for their own use, he added, noting restoring state inspections would remove hurdles for local ranches to do their own commercial meat processing.

In the meantime, federal certification should be streamlined so local producers can process their own meat, said Don Martinez, owner of Naturally New Mexico Food Products, an El Rito meat processor and wholesaler.

“USDA has all these rules that the big meat processors wrote for them,” Martinez said, adding that if smaller producers could get into processing, there would be no shortage of meat.

“They need to make it easier for ma and pa places,” she said.

For their part, sheep ranchers were ensnared in the Trump administration’s trade war with China, a huge wool buyer that quit importing the product from the U.S. But that dispute was resolved recently, and the market started to rebound, said Bronson Corn, president of New Mexico Wool Growers.

“And then this pandemic hit, and it shut back down again,” Corn said. “It’s just one thing after the next.”

New Mexico’s wool prices are at $1.75 per pound, down from the $2.10 a pound it sold for before the pandemic and $3.50 a year ago, Corn said. The state is actually fortunate, he added, because in other parts of the country, wool has lost 70 percent of its value.

The industry’s real pain is with lamb meat, Corn said. Sheep have lost about 30 percent of their value in the past 60 days.

With the drought driving up the cost of feeding the animals, some sheep ranches have gone out of business, Corn said.

Antonio Manzanares, co-owner of Shepherd’s Lamb, a ranch west of Santa Fe, said his lamb sales have dwindled since restaurants shut down.

He and his wife, Molly, have some their ranch’s wool made into blankets and yarn, but they could no longer sell them at the Santa Fe Farmers Market when it became limited to offering essential food products.

The couple had to shut down their store during the pandemic and quit teaching classes on weaving, spinning and dyeing wool, which compounded the loss of income.

Their online sales are the one thing that have kept steady, Molly Manzanares said.

Corn said lamb meat is mainly sold in restaurants, so having them closed slammed the industry. Gov. Michelle Lujan Grisham’s recent decision to allow dine-in restaurants to run at 50 percent capacity will help, but it won’t be enough for the market to recover, he said.

Cattle and sheep ranchers worry the calves and lambs stuck at feedlots are growing too big. For instance, cattle that typically are sent to processors when they reach 1,200 pounds might not go until they are 1,600 pounds or heavier.

And when the bulkier animals are finally slaughtered en masse, it could cause a meat glut that will depress prices even more.

“It could make it worse,” Corn said.

Naturally New Mexico Food Products, based in El Rito, provides lamb products throughout the region, including the Navajo Nation, where infection rates are high.

The paper has two contradictory headlines--in one the cattle and sheep industry are in decline and in the other, a lamb producer is increasing their business. Any comment journalists on the two different headlines? And why did the paper not mention whether these cattle and sheep growers got any of the billions in agricultural subsidies including the latest 13 billion dollar welfare payment (Oh, I mean subsidy) to that industry?

Many of these ranchers graze their animals on lands we all own such as BLM and Forest Service lands. These agencies heavily subsidize the ranchers by charging them almost nothing for public grass. And grazing does tremendous damage to streams while spreading noxious weeds.

Meatpacking is highly consolidated with four companies -- Tyson Foods Inc., JBS SA, Cargill Inc. and National Beef Inc. -- controlling about 80% of the U.S. beef processing market. This is a root cause of the low prices paid small producers. The Department of Justice is currently conducting an investigation of possible antitrust law violations by these companies. Hopefully the Department will stay the course, but this is hardly assured under the current Administration. Another major problem in the beef industry is the low lease rates charged ranchers for grazing public lands and the overgrazing of these lands permitted by the Forest Service and Bureau of Land Management. These policies increase the supply of cattle at the public expense. Ranchers with cheap leases are given a competitive advantage over those without. By increasing supply, cattle grazed on public ranges will contribute to reduced prices in times of lower demand.

Good riddance to an evil industry. Nobody should be allowed to profit from the wholesale torture, abuse, and slaughter of thinking, feeling, sentient creatures. And anyone who considers themselves even remotely progressive on climate issues are pure hypocrites if they continue to eat meat and dairy. Shame!

A radical idea: Let's consume less meat! New Mexico's not the place for cattle, in any case. With fast-eroding topsoil and not enough rain, it's a fool's errand to try and raise cows. Instead of figuring out how to save a dying industry, let's consider how we could repurpose this land into something more sustainable long-term. Americans love their beef, but I bet they love their land more.

I grow hay and alfalfa and my soils are stable and healthy.

The ranchers must create a coop and open their own meat processing, it will increase their margins and be more direct to consumers and retailers. Start eliminating the middle men.