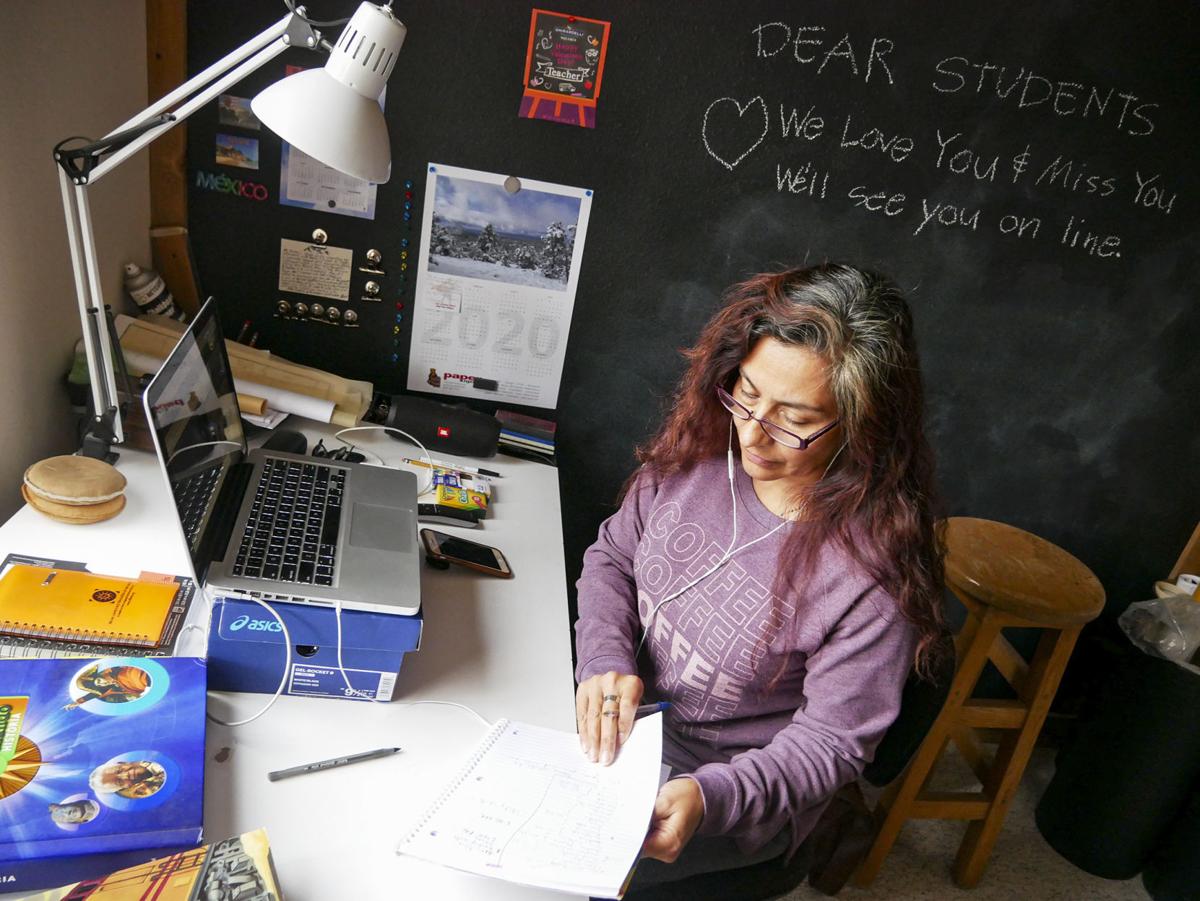 Blanca Isabel Correal-Burns, a teacher at Ortiz Middle School, goes over her notes during a video meeting with colleagues Friday afternoon from her home. New Mexico teachers will instruct students through distance learning for the remainder of the semester due to the spread of COVID-19. 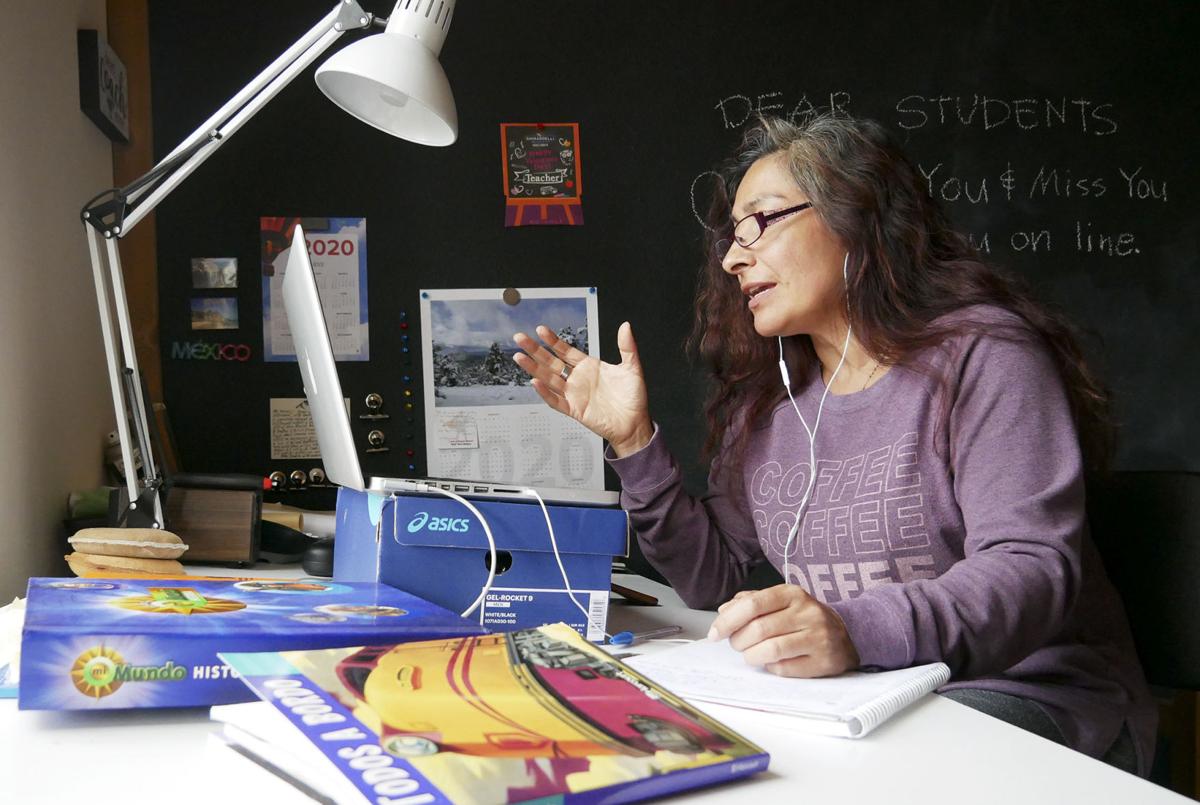 Blanca Isabel Correal-Burns, a teacher at Ortiz Middle School, speaks with colleagues during a video meeting Friday afternoon in her home. New Mexico teachers will instruct students through distance learning for the remainder of the semester due to the spread of COVID-19. 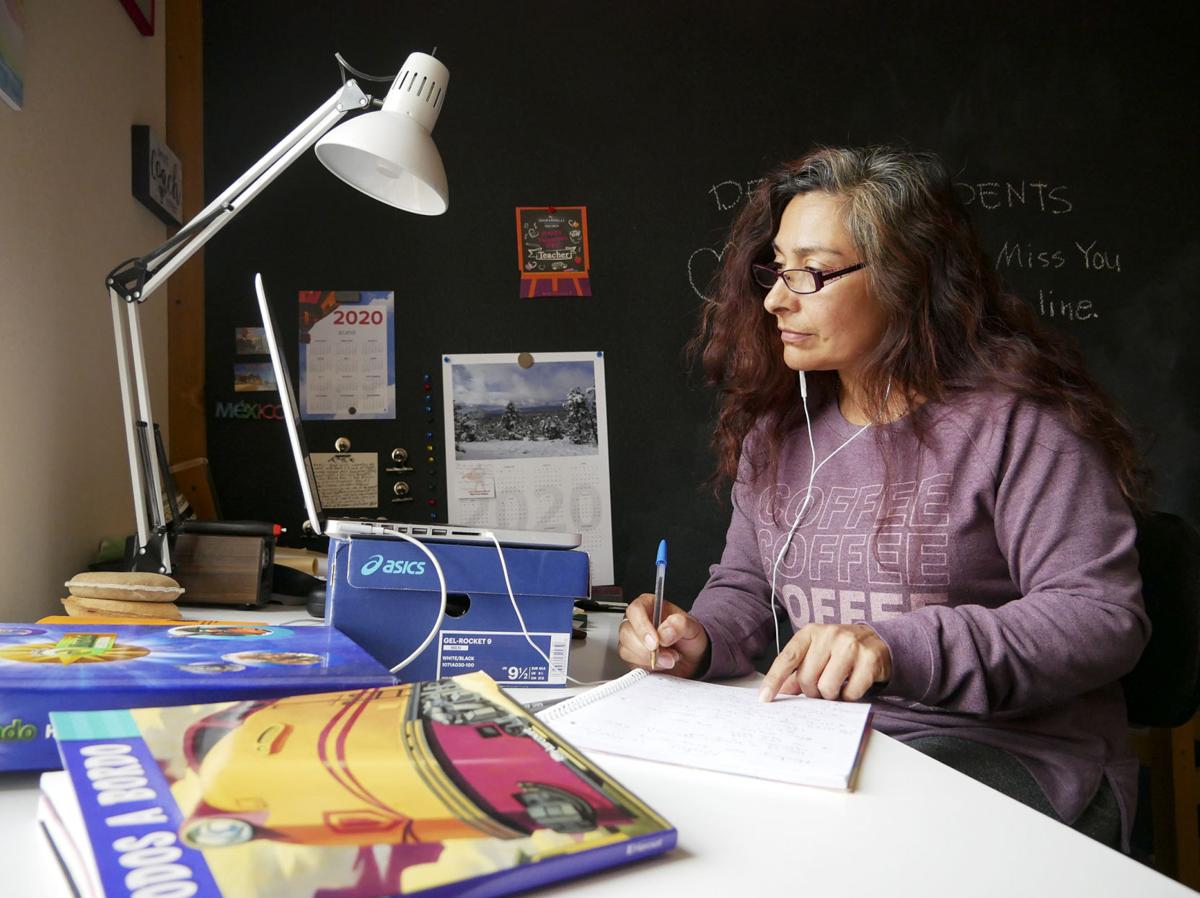 Blanca Isabel Correal-Burns, a teacher at Ortiz Middle School, takes notes during a video conference call with colleagues Friday afternoon at her home. New Mexico teachers will instruct students through distance learning for the remainder of the semester due to the spread of COVID-19.

Blanca Isabel Correal-Burns, a teacher at Ortiz Middle School, goes over her notes during a video meeting with colleagues Friday afternoon from her home. New Mexico teachers will instruct students through distance learning for the remainder of the semester due to the spread of COVID-19.

Blanca Isabel Correal-Burns, a teacher at Ortiz Middle School, speaks with colleagues during a video meeting Friday afternoon in her home. New Mexico teachers will instruct students through distance learning for the remainder of the semester due to the spread of COVID-19.

Blanca Isabel Correal-Burns, a teacher at Ortiz Middle School, takes notes during a video conference call with colleagues Friday afternoon at her home. New Mexico teachers will instruct students through distance learning for the remainder of the semester due to the spread of COVID-19.

New Mexico's chief education official announced Friday that public schools statewide will be closed for the rest of the academic year as families remain isolated in their homes to help stem the spread of COVID-19.

News of the extended school closures came ahead of a notice from the Governor's Office of a 40 percent surge in confirmed cases of the novel coronavirus, which causes COVID-19. The 55 new cases announced Friday made up the largest daily number the state has seen since the virus was first confirmed here March 11.

"We know we still haven’t reached the peak of this, and it’s quite clear it’s not yet safe to bring our students back into school,” Stewart said on a conference call Friday morning.

Later Friday, Gov. Michelle Lujan Grisham said on Facebook Live: "I know that there are students and parents who have really struggled these past two weeks. It's tough. You're socially isolated, you're not participating in your school activities, you're not engaged in the day-to-day learning that really is valuable.”

She lauded students and parents for their efforts to stay home and help contain the virus. “For the families who are maybe running out of patience about this social isolation … I want to thank you for meeting this challenge head-on."

Lujan Grisham issued an executive order March 13 for schools to shut down until April 6. During that time, districts were not required to provide instruction. Still, Santa Fe Public Schools has moved forward this week with plans to launch a districtwide distance learning initiative Monday in which teachers and students will be working from their homes.

On the conference call Friday, Stewart said he expects all districts across the state to begin offering online instruction after April 8 — the deadline for every district and charter school in New Mexico to submit a plan — but he did not provide a specific date.

According to Public Education Department guidelines sent to superintendents and charter school leaders, classes should be continued on a pass-fail basis, and typical requirements for daily instruction time have been waived.

Online learning is important in part, the governor said, so high school seniors can get the credits they need to graduate and move on to college.

“Colleges, community colleges, universities [and] trade schools are working with us to make sure that we have a very easy application process,” she said. “We stand ready to make sure that there's no interruption in that effort.”

The U.S. Department of Education said earlier this week it intends to approve the state's request to waive federal standardized testing requirements in math and reading for public school students.

Santa Fe Public Schools has enough laptops and tablet computers for every student to engage in online learning through May 20, the last scheduled day of school.

Districts that lack enough devices and technological infrastructure for mass online learning programs may be able to access grants or loans through a $100 million fund in the congressional coronavirus aid package approved Friday. The fund is for local governments and businesses to develop broadband internet in rural areas. The legislation also contains $25 million for distance learning, telemedicine and broadband programs.

"We anticipate that a significant amount of funding will be available for both local districts and the Public Education Department to close some of the technology gaps," Stewart said. "We will see what we can do to offer services that can be downloaded and aren't completely dependent on a broadband connection."

According to the department, school employees will continue to be paid while campuses are closed, but compensation for contractors, such as bus drivers, depends on the language in their contracts.

In the meantime, Stewart said schools have been providing meals to roughly 150,000 children per day, about 45 percent of the state's entire student body, for the first two weeks of the school closures. Many districts also have been providing internet hot spots and school supplies at meal service sites. The meal services will continue.

Public universities and community colleges were excluded from Lujan Grisham's executive orders about school closures, but several have announced they will keep their campuses shut down.

Santa Fe Community College President Rebecca Rowley announced Friday the campus is closed through May 16. While many classes have transitioned to an online format, others will be extended into the summer semester.

The University of New Mexico also is finishing the semester through remote instruction.

The state closed campuses for the rest of the academic year and said instruction would move online.

Compare our governor's message, above, to the President's, below.

At a White House briefing, Trump was asked what he has to say to families and children stuck at home, he did not acknowledge the struggle underway for school districts and families to set up remote education. Instead, he suggested children just wait it out.

“They have a duty to sit back, watch, behave, wash their hands, stay in the apartment with mom and dad,” he said. “Some of them are very happy not to go to school.”

He added: “We have literally had no problem,” though in fact districts have struggled to distribute food to poor families and to ensure that all students have computers and can connect to the Internet, and more.

“They should just sit back and be very proud of our country,” Trump said. “Ultimately we’re doing it for them.”

Hopefully, no one will contract flu next year.

Why irresponsibly conflate COVID-19 and flu, in direct opposition to health professionals who know what they are talking about? These thoughtless comments are hurting the nation, state, city, county and our family and neighbors.

Randy, all you do is perpetuate additional fear among people who are unemployed and scared as it is. You add no hope whatsoever, just doom and gloom. COVID-19 is not about you, but you seem to make it about yourself. Instead, why don't you go volunteer at a homeless shelter? Do something helpful for fellow citizens.