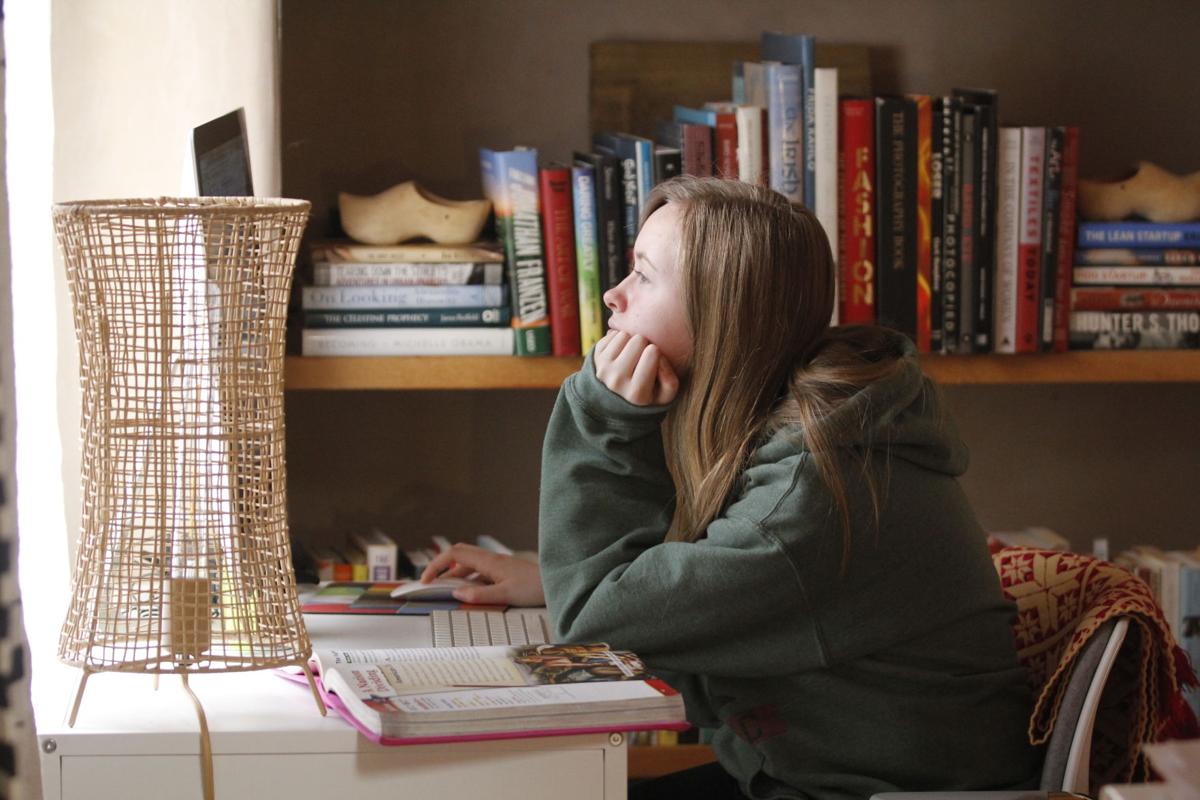 Chloe Mann, then an eighth grader at St. Michael’s High School, finishes up with her schoolwork while distance learning in March. Many students in New Mexico could still find themselves learning online at least part time when schools reopen in the fall.

Capital High School teacher Laura Carthy has a discussion with her class during a reading of Othello in 2016. Carthy says she has concerns about returning to the classroom. ‘I feel like they are trying to find a way to make people go back to school safely when it’s clearly not safe to go back to school,’ she says. 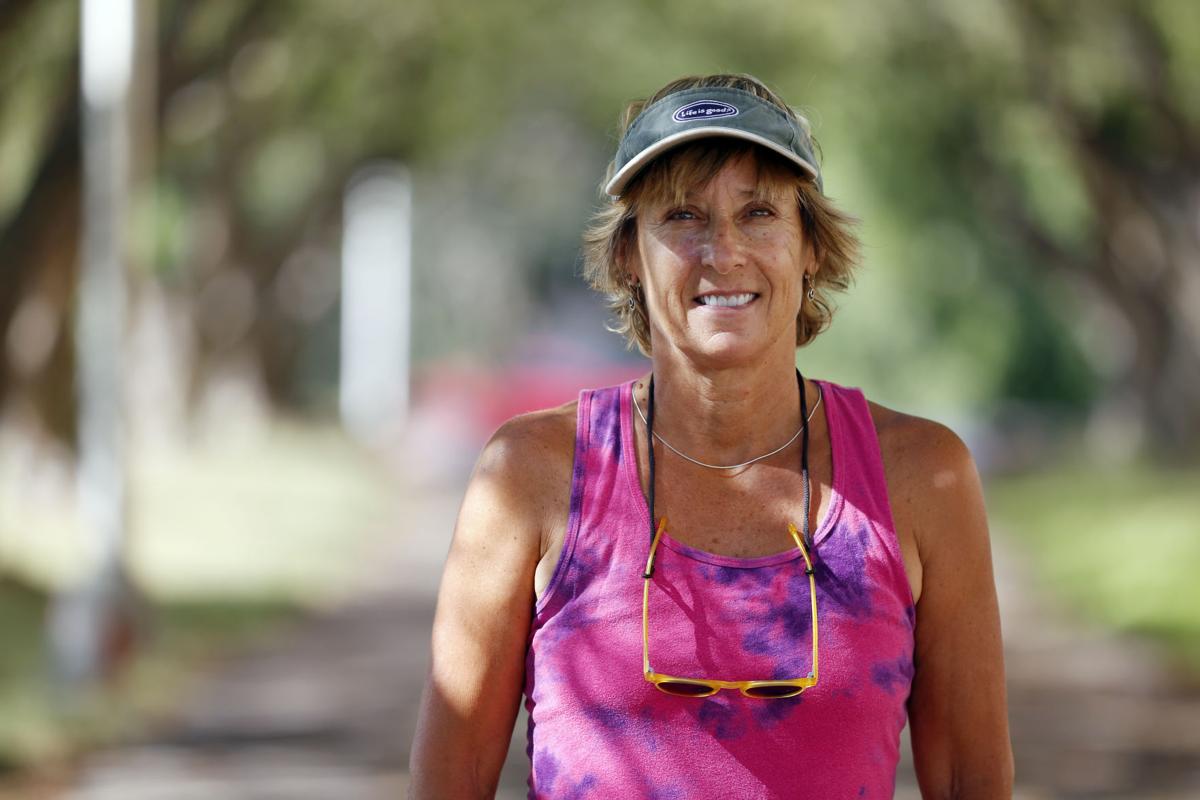 ‘I’m scared to death,’ says Carlos Gilbert Elementary School teacher Jennifer St. Clair. ‘I’m 58 years old. If I get sick, what am I gonna do?’

Chloe Mann, then an eighth grader at St. Michael’s High School, finishes up with her schoolwork while distance learning in March. Many students in New Mexico could still find themselves learning online at least part time when schools reopen in the fall.

Capital High School teacher Laura Carthy has a discussion with her class during a reading of Othello in 2016. Carthy says she has concerns about returning to the classroom. ‘I feel like they are trying to find a way to make people go back to school safely when it’s clearly not safe to go back to school,’ she says.

‘I’m scared to death,’ says Carlos Gilbert Elementary School teacher Jennifer St. Clair. ‘I’m 58 years old. If I get sick, what am I gonna do?’

Through some 30 years in the classroom, Jenni St. Clair has never been so anxious about going back to work.

“I’m scared to death,” said the Carlos Gilbert Elementary School teacher. “I’m 58 years old. If I get sick, what am I gonna do?”

Though eager to see their students again after a disrupted 2019-20 school year, St. Clair and other teachers voiced concerns and uncertainty as New Mexico’s Public Education Department unveiled its plan to bring students back in August as the shadow of COVID-19 lingers.

The first wave of the COVID-19 crisis continues to impact American life, and though New Mexico may be surfing the viral storm better than neighboring states, health experts say it’s likely the nation will experience a second wave come the end of summer and beginning of fall.

The start of the school year, in other words.

The Education Department’s return plan, which gives districts flexibility in implementing a hybrid model of alternating students between on-site and online education, won some praise and elicited plenty of questions from educators, administrators and union leaders who said that while there is merit in the outline, concerns still abound.

The plan gives district leaders some leeway in deciding which of three choices to pursue come mid-August: alternating students in school and off-site at home by the week, alternating them in school for two days of on-site learning and three days of off-site learning, or staying with the remote virtual learning plan New Mexico districts implemented in March.

Putting aside concerns about the efficiency of online education — especially in districts where distance learning has proved difficult — many educators say too many questions remain about what could happen if the virus doesn’t subside. And many note that when they are in the classroom, they will be on the front lines, not unlike health care workers and first responders.

Grace Mayer, a middle school art teacher and president of the Santa Fe National Education Association chapter, said there are questions about what happens to a school employee who falls ill — and what that means not only to a teacher but the people he or she lives with.

“A lot of it, of the concern, is related to teachers’ possible exposure to their families,” said Mayer, who believes Santa Fe Public Schools will work out a plan to ensure safety as much as possible.

But what should teachers do, Mayer asked, if they test positive and have young kids or wives who are pregnant or aging family members living with them?

“They can’t go home to quarantine for two weeks,” Mayer said. “That’s the thing nobody is talking about. So if we get sick, where do we quarantine? I can’t afford to go to a hotel for 14 days. What am I supposed to do, never go home?”

Susan Lumley, outgoing principal of Academy for Technology and the Classics, said another question some teachers have is what to do on the days when they are supposed to be in class teaching and their own children are supposed to be home.

Assuming those parents can afford child care, there still might not be enough child care programs in operation to accommodate those students, Lumley said.

St. Clair said she wonders how parents will be able to adjust to a hybrid model that will require an alteration to their work schedules.

“How do we get the economy back if kids are going to school two days a week but their parents can’t do their jobs full time if they have children at home for three other days?” she said.

St. Clair was one of several teachers who questioned whether students — particularly high schoolers who might be less willing to physically distance themselves from friends — would adhere to public health safety guidelines such as practicing social distancing and wearing masks.

Roberta Roybal, who teaches health classes at Santa Fe High School, said she has seen enough public demonstrations of affection to wonder whether such behavior could spread the virus.

“My classroom is in the gym,” said Roybal, who, like many, misses being around students. “I see a lot of kids coming through, walking together, holding hands — especially if they are a couple — hugging each other, hugging me. I suppose if I told them to not do that, they might not do that, but it remains to be seen. Will they really, really listen?”

Laura Carthy, a longtime teacher at Capital High, has her doubts. She said returning to school could work for elementary schoolchildren who need more guidance, reassurance and structural support. But it could prove tough for older students.

“They may wear masks,” she said. “But they won’t socially distance.”

Carthy has a special-needs son at home, one of the “most vulnerable” to the virus, and worries about bringing it home to him.

Mayer said educators may be faced with other problems if students refuse to wear masks, especially if their own parents don’t use masks at home. Do masks become part of the public school dress code? And what power, if any, do educators have to really force a kid to wear a mask?

“That becomes a disciplinary issue for us, but it’s more than that,” she said. “How do you handle something like that if philosophically you are on the other side of the argument [for wearing masks]?”

Educators also said they worry some teachers simply won’t return to school out of safety concerns. The same question applies to parents who may opt to keep their kids home. A recent USA Today poll found that one out of five educators said they are unlikely to return to the classroom in the autumn if schools reopen. That poll also reported six of 10 parents said they would consider stay-at-home options for schooling rather than send their kids back to possible areas of contamination.

Still, not all is gloom and doom and anxiety.

Mayer said she is happy the education department is giving staffers who have high-risk medical problems the chance to be reassigned to avoid infection.

Tim McCorkle, principal at Bernalillo High School, said his district already has put together a task force to study ways to make the plan the district chooses work and to keep people safe. He added schools have to figure out a way to take the pulse of “all stakeholders” in the process.

In his case, that means talking with leaders of the seven pueblos that are home to many of the students in his school.

“And, as you know, those pueblos got hit hard [with the virus],” he said. “We’ve got to get cracking.”

Roybal is optimistic administrators and educators will figure it out, even if it takes a “bumpy” semester to do so.

Most important, she said, is that the kids need to return to school.

“I do go through days that I’m super frustrated and tired and sick of wearing a mask when I go out — and now I’m gonna be even more sick of it when I have to wear a mask at work,” Roybal said. “But I feel like our kids need to get back to some kind of routine and some normalcy.

As a teacher ( almost 65 years old) I am not concerned about going back to the classroom so long as I have PPE. This would include a 3 or 4 ply face mask, disposable nitrile gloves, and a face shield. Classrooms should be equipped with a generous supply of hand sanitizer and extra disposable masks. Desk arrangements 6 feet apart and supply of sanitizing wipes to used by students when they take a seat.

“And maybe if we say, ‘Hey, you get to go back to school, but in order to do that, you need to do A, B and C to stay safe,’ they’ll do it. That’s my hope.” My hope is most paranoid parents stay home with their kids and teach them on their own, allowing smaller classes for my kids. It'll be great.

That may work for younger kids who still listen to the elders or respective adult figure. Middle school and high school is a different story. Good luck with social distancing.

Oh right - because most paranoid parents in this state are economically free to stay home, and have the education and language abilities that make them qualified to homeschool. Your overly simplistic approach ignores reality, and is an insult to all those working hard to make a plan that works, educates kids, and still keeps folks safe. It's okay not to respect teachers, but these types of public dismissals are really unproductive.

Tell me, why is it okay not to respect teachers?