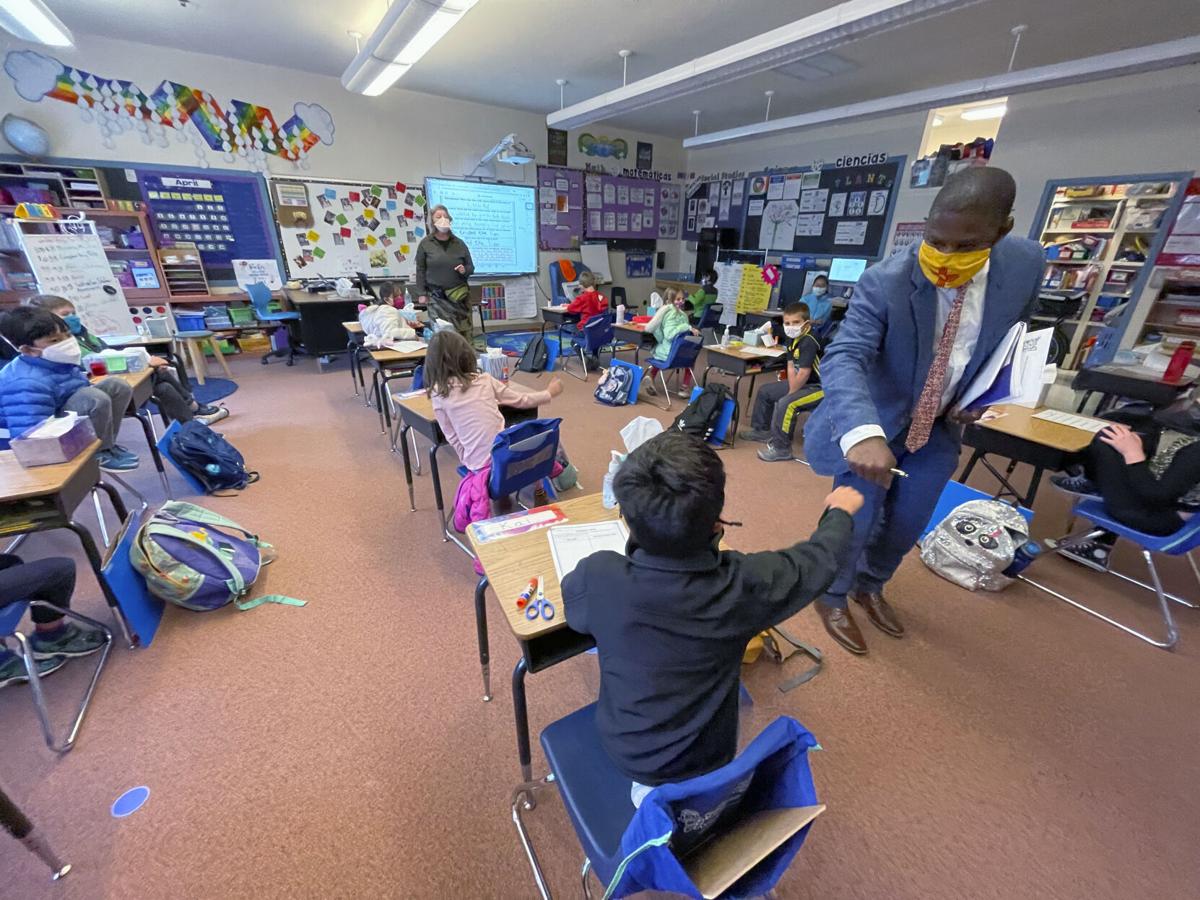 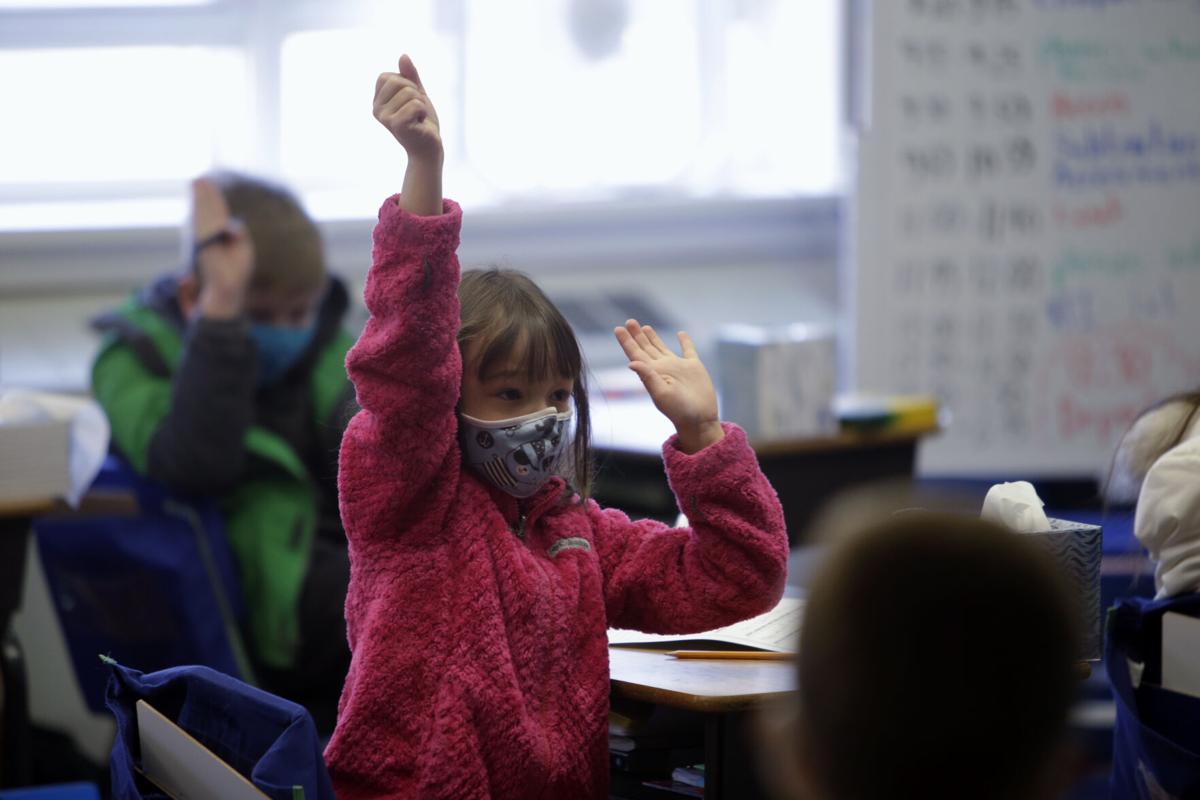 He says it’s his way of battling the “COVID fatigue” that has become a common theme as the coronavirus pandemic enters its second year. Marano hopes the message hits home, especially with four COVID-19 cases having been reported at Santa Fe High since it opened its doors to students for hybrid learning Feb. 22, with a full reentry April 6.

The cases led to the school being placed on the state Public Education Department’s watchlist and the premature end of the football season in late March, followed by a 10-day halt to the girls basketball team’s activities.

Overall, the district has reported 10 coronavirus cases since Feb. 22, and it indicated contact tracing showed none of the infections occurred on campus. The district announced the latest case Wednesday evening, which involved a student at El Dorado Community School. It was the second straight day the district announced a case at the school, but a news release stated the two cases were unrelated.

Marano said contact tracing indicated none of Santa Fe High’s infections occurred on campus and only the last two cases, which involved girls basketball players, appear to be linked. The second player who tested positive already was in quarantine because she was a close contact of the first player who contracted COVID-19. The basketball program’s pause concluded Monday.

“I think it’s a matter of our students and families and all of us to be more careful when we’re outside of school,” Marano said. “Things have opened up again, so there is a tendency to get a little careless, and we all have to realize that it’s still out there and to be responsible.”

The numbers at Santa Fe High and in the district at large so far have been modest compared to issues faced by other schools around the state. On Monday, Albuquerque’s Eldorado High School switched to remote learning for two weeks after four rapid responses were reported at the school in a 14-day period. Tuesday saw the Public Education Department announce three schools — Bloomfield’s Mesa Alta Junior High School and Central Primary School, plus Socorro High School — opted for remote learning for two weeks amid coronavirus cases reported at the schools.

Bloomfield School District Superintendent Kimberly Mizzell said potential exposure to the virus among teachers and staff members who chose not to be vaccinated led to the closure of the middle school, while the majority of Central Primary students would have been quarantined as close contacts to two positive cases.

Socorro High School has reported seven coronavirus cases since Thursday, and Socorro Consolidated Schools Superintendent Ron Hendrix said in a news release he hopes the shutdown will stop the virus’s spread. The district also will hold a COVID-19 testing clinic Thursday for any student in the district who wants to be tested.

Stewart added that, based on his department’s discussions with state health officials, there doesn’t seem to be a rise in positivity rates overall, and the school-specific cases do not appear to be a statewide trend.

“Those aren’t easy calls,” Stewart said. “They made the tough calls to say, ‘We’re going to stop it before it spreads.’ That’s how we keep our schools safe and our communities safe.”

Part of Stewart’s visit to Wood Gormley was to observe how health and safety protocols are working. He also received feedback from students and teachers about remote and in-person learning. He heard several students underscore the importance of wearing masks and the need to be safe for in-person learning.

While not all classrooms spaced students’ desks 6 feet apart, Stewart noted the 3-foot approach — which the Centers for Disease Control and Prevention recently promoted in its school reopening guidance — is proving to be effective, as long as it’s accompanied by mask-wearing.

Stewart also said Wood Gormley, where about 70 percent of students have returned to school since full reentry began, has set a good example of maximizing space and safety guidelines.

“This school has a higher percentage of students back than others, but they are making it work,” Stewart said.

The recent outbreak of campus closures around the state came on the heels of the Public Education Department announcing Monday it will offer students the opportunity to be tested for COVID-19 as another tool to enhance safety at public schools. Testing will be voluntary and at no cost to participants.

Districts and charter schools will implement student-testing programs no later than the week of April 26, according to a department news release. The goal is to test 1 percent of students weekly and 10 percent of students involved in athletics and activities.

“This isn’t a response to the things that have happened,” Stewart said. “Services like this help us as a state know what’s happening, what the trends are and the positivity rate.”

Santa Fe Public Schools Superintendent Veronica García said she expects case counts will rise because of the program, but it might detect asymptomatic students and prevent larger outbreaks. García expressed confidence in the district’s health and safety guidelines.

However, García said the community needs to remain vigilant about following COVID-19-safe practices.

“Now that people get to go out to restaurants and things like that, they get a false sense of security that everything is so much better,” García said. “It has improved, but the virus has not gone away yet.”

Gee, we're in the middle of a pandemic. Over 560,000 deaths in our country. Seems like common sense to remain vigilant.

Just stop the nonsense already. Let the kids go to school and learn, let the teachers go to school and teach. No one blinks an eye when someone gets the flu but here we are closing schools because of a ´virus´

Prior to the chicken pox vaccine I don't remember schools shutting down or requiring kids to sit apart from each other when a classmate came down with it. You spent two weeks miserable covered in itchy pustules with a fever. Some parents considered it a good thing if you caught it and just got the disease over with. Some kids had worse cases than others; some also died. Like Covid, it's even worse for adults. Covid, of course, is deadlier. That said, someone thought we had to avoid chicken pox altogether and get vaccinated.

And where was the panic was I developed a fever in class, even had a pock on my arm? How times change. Would we have the same reaction today?

Schools, parks and public pools used to close during polio outbreaks. But most people don’t know that since polio was pretty much eradicated through the widespread use of vaccines.